Hypotheses for Life Origin on Earth, Comparison and Validation

Life origin on Earth is an interesting topic all over world. RNA world, extraterritorial living-form landing, volcanic eruptions, cooperative biological origin hypothesis are major hypotheses so far. A great number of physics, chemical, biological and ecological factors are shared in this Editorial. Advantages and limitations of different aspects of life-origin hypotheses are overall highlighted.

Current popular hypotheses for life origin on Earth are classified; including

To face with different hypotheses, systematic comparisons and validations are required.

In order to systematically compare different hypotheses, physical, chemical and ecological factors are associated for primitive earth conditions. These different scenarios are analyzed. Different physical or chemical data are categorized among different aspects of evolutionary models (Tables 1 and 2) [9]. The more we study different factors (physical, chemical, biological and ecological), the more we can get pictures of several billion years ago. However, it is equally important comparing with model validity for life-origin [10]..

From these different physical, chemical or ecological data and possibility, we may find the driving-force for life-origin in primitive stages.

Greatly rooted from Darwin’s ideology and basis of molecular biology, the majority agreement is that the RNA is capable of cell integrity and functionality [1,2,11-13]. The core of this basis is the backbone of existing hypothesis. RNA world is based on the proposition that RNA-like substance can be multi-level and multi-functionality of all primitive life. Figure 1 shows the possible route of life-origin via RNA world hypothesis. 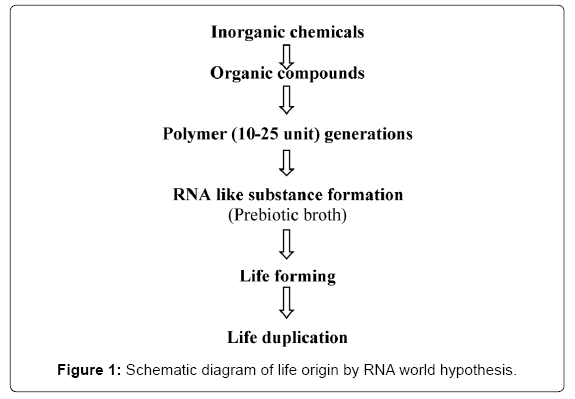 There are other models of cooperative models regarding to the requirements of multiple genetic material cooperation and life duplication [5,6]. Since genetic information duplication is the foremost important step to create a life with integrity and persistence, it is widely accepted that this process is a crucial step in life origin. However, life origin and duplication is in a same time-scale. Life form is a complex course that needs more than one pattern of biological molecule. Thus, among a process of life origin, it must contain more than one category of biological molecules [7,8]. This past argument-a cooperative modality in life-origin was published several years ago and widely viewed in the internet [7,8]. But it does not receive enough experimental work. As a result, more attention must be focused on this hypothesis.

The major conflict between RNA world and alternative RNA world is whether only one type of biological molecule (primitive RNA) and multitude of biological molecules (similar as present knowledge) are present in the initial stage of life origin [14-16]. It is not a superficial question. Although there is no straightforward answer for this question, new question and debates are all welcome because this can improve our understanding on life origin. Yet it is very important for fully understanding these scenarios and translating it into new biomedical applications and data simulation via computational network.

Where does life come from? Insider or Outside

There is a different argument that life comes from insider (deep sea) or outside (extraterritorial life landing). Organic compound synthesis from different inorganic substances of volcanic eruptions in deep sea is argued in 1980s [3,4]. This hypothesis exists quite long but has also less experimental work supporting owing to limitations of technical capability.

Space-exploration has been tremendously developed over the last half century among Russia, US and PR China. However, their interests are only focused on Moon or Mars landing. Collecting rocks floating among outer-space may prove whether there is an opportunity for extraterritorial landing across old age. Thus we propose a project that starts a space-exploration program on this issue. This hypothesis deserves for scientific project to validation in the next decades.

Hypothesis is subjected to evolution. Different findings and arguments support different form of life-evolution hypothesis/ theories while they are still reliant on solid experimental validation and mathematical simulation. There are a lot of experimental data can be done. Some key-processes such as the matter of speed and a step of stability are useful information ton hypothetical integration and updating [17]. We need wider visions, comparison and validation Figure 2 is a latest model derived from other reporter [12]. We use it to show outcomes similar to our early argument [7,8]. 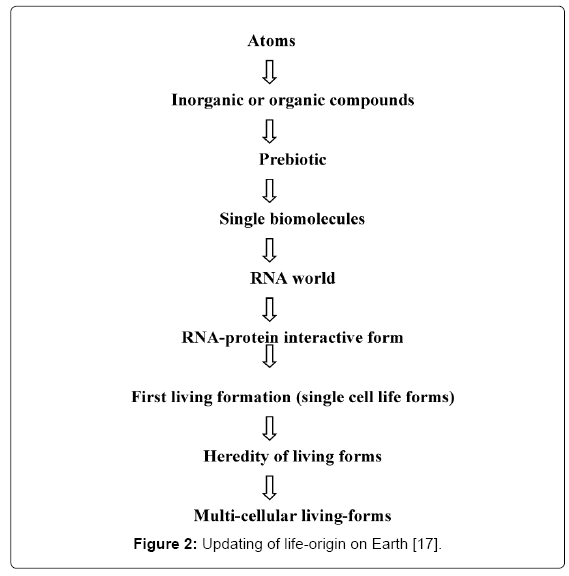 Different people supports different life-origin hypothesis. Every reader will give his/her own verdict. This is an open question until now.

A lot of creative ideas may be emerged that invite experimental work to validate. As the proposers of multi-molecular mechanism, we wish this hypothesis can be continued by new experimental clues and data-including growing mathematics, physics, chemistry modality [18- 20]. It is not a question of biologists. It is a question of all people. By global cooperation, this enigmatic question will move forward in the near future.

Life origin on earth is unknown to us so far. This Article gives our visions on this matter. Certainly, besides biologists, scientists in other areas can also take part this research and finally bring their contributions to the world. Look forward to more heated arguments, discussions and validation in the next decade.

Copyright: Â© 2019 Lu DY, et al. This is an open-access article distributed under the terms of the Creative Commons Attribution License, which permits unrestricted use, distribution, and reproduction in any medium, provided the original author and source are credited.