Every year about 10,000 Tunisians peoples, nearly ten per cent of all citizens, travels to Mecca for one month to realise pilgrimage rituals. Middle age is about 65 years. In 30% of all cases, pilgrims suffer from chronic diseases. They are mostly diabetic. Some of them are treated for hypertension. Elderly’s females suffer from osteoporosis and arthrosis while males have chronic shortness of breath in relation with chronic obstructive pulmonary diseases [1]. This travel is characterized by promiscuity, important mobility and exposure to heat particularly in summer season [2].

These particular conditions lead to four challenges. Epidemics’ infectious diseases are the most frightened challenge. The others defies are traumatic accidents involving large number of pilgrims, heat stroke requiring specific cares and acute decompensating of chronic illness responsible of prolonging the length of hospital stay [2-4].

In this paper we aim to exposure Tunisian data collected in the last 3 years: from 2015 to 2017 and we will discuss the opportunities to prevent some of these risks. Lacks of data, registered last years, and climatic changes predictable since 2014 [5], motivate us to conduct this descriptive study.

For the last three year, from 2015 to 2017, we conduct a cohort observational study, with some interventions. The follow-up and emergencies prehospital cares of these three cohorts of pilgrims was done by a mobile team of health professionals including physicians and nurses. Pilgrims medical triage was done before the travel, based on intellectual capacity and ability to accomplish effort. Retained persons were educated to adopt healthy comportments during their travel.

In these three successive years the leadership team was no changed. Interventions done were about rigorous adoption of preventive measures to avoid traumatic accident like what happen in 2015 (The important trampling of Mina) and recommendation of PCV13 vaccination since 2017, after the rise of pneumonia cases observed in 2016. The health group was trained to assure emergency health care on travel, and for that we carried all material needed. A strategic health operating centre (SHOC Room) collect daily data and treated them minutely for making decision and manage sudden events. Because of shortness of information, the SHOC room players use various tools like hospital databases, mobile health applications, social media and administrative travel data to be in aware of event and to monitor occurrence. None minor information was get out before verification by the mobile team who visit daily all residences and all hospitals around the Tunisian’s health care centre. Data collected are correlated with events in relation of hajj rituals to allow health care professionals to rescue pilgrims in difficulty. So they make them able to be present in Arafat on the 9th of the final month of the hegira agenda, since it’s the most important event in the whole hajj rituals.

A medical triage was accessible for all pilgrims 24 h/24 h, 7 days per week and anywhere. This procedure allows identifying whose of emergency health care needed. Only clinical features and clinical reasoning are adopted to manage these cases. After the first health care management, we referred some of illness to Saoudian emergencies departments. Abnormal results of explorations done in hospital departments and lack of health improvement are the most conditions required for hospitalisation. Pilgrims who need more health care after the end of the Hajj period return to Tunisia under medical assistance.

Health care flowchart of the three years (2015-2017), in terms of average values is presented in Figure 1. All pilgrims were triaged. Triages were made by physician in all cases. Many pilgrims were inspected more than once (Table 1). We take care of resuscitate case in our health care centre, out of Saoudian hospitals. Shortness of breathiness was the most cause of consultation. It was about 29% of all resuscitated cases. In most cases features associate fever, cough and modified mucus expectorations in relation with pulmonary infection diseases. The second reason for resuscitation was heat stroke it was about 21%. Dehydration and exhaustion was about 15%, all these dehydrated patients were conscious. Acute complications of diabetes represent 13%. In most cases it was about ketoacidosis. Chest pain and palpitation was seen in 11% of cases. Traumatic accidents was about 8%, most lesions are located in arms and legs. Falls was the most reason of theses lesions. Acute abdominal pain was registered in 3% of cases. In some of these cases more exploration for suspicious surgical abdomen was indicated (Figure 2). About half of pilgrims referred were hospitalized. In many cases, as presented in Figure 1, pilgrims had poor prognosis and died. Causes of death are illustrated in Figure 3. 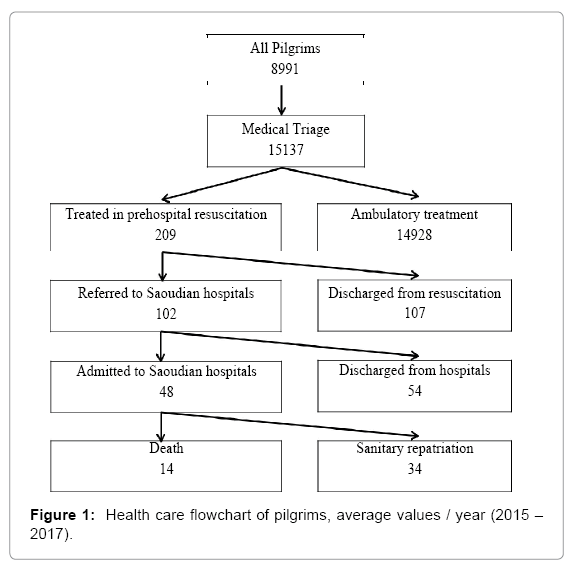 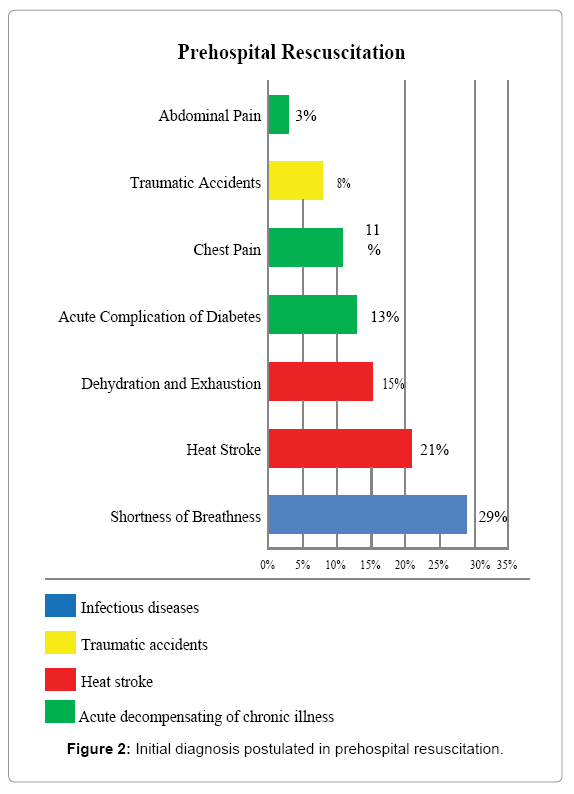 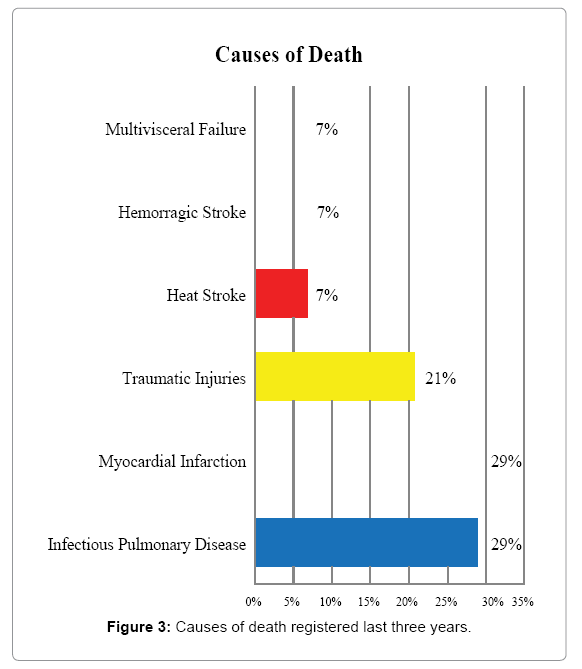 Table 1: Results of medical triage in term of disease speciality.

Since 1992, and progressively, Tunisian first health care department put in place a strategic approach based on being at the rescue of the pilgrims before appearance of complaints. So mobile health care team make residence visits and check for abnormal comportments or illness pilgrims who can’t are not able to come by them self to medical triage location [4]. For the same target, and since 2001, implementation of pre-hospital resuscitation unit (rescue and run) allows reducing the incidence of hospitalized case in Saoudian hospitals by 75% in comparison with the period below [1,4]. The lack of economic data and development of a “quality of life score” inspire us for further original studies.

By analysing medical literature to develop our model of taking care, we note that pilgrims’ health complaints are season related. In fact, the first’s literature cases of heat stroke were reported in 1983, when pilgrimages coincide with summer season [5]. So, since difference between Gregorian calendar and the lunar one is about 11 days per year, we have previewed rising in heat stroke from 2014 (about 33 years later 1983). However technologic development of air-conditioners contributed to control the challenge of sun and heat stroke. That explains the incidence of 1% of sun and heat stroke among all medical triage cases in our study. On the other hand, and as side effect of this improvement of life conditions, we note that ENT and pulmonary infectious pathologies are rising as presented in Table 1 and compared with our last report [1,6].

In this context of infectious challenge, medical researches focused on microorganism portage and pathogens responsible of epidemic infectious diseases. These papers aid health authorities to develop recommendations of pilgrims’ vaccinations. The best example, to illustrate this, is meningococcal prevention. In fact since the epidemic meningitides declared among mecca pilgrims in 1987 vaccination procedures are developed [7]. And actually world health organization (WHO) recommends A, C, Y and W135 vaccine [8]. However recommendations for prevention of respiratory tract infection, mostly faired when Influenza H1N1 or Middle East Coronavirus are suspected, are still under health professional expectations [9]. In our study infectious pulmonary diseases cause the third cases of death (29%) for the 3 years 2015-2017. This charge was about 60% in only 2016. That’s why we recommended PCV13 since 2017 as done by many others countries [10]; for who, Influenza vaccine and non-pharmaceuticalintervention are also recommended [11,12].

Traumatic crowd injuries are expected as a redoubtable challenge. Many preventive measures were taken by the authorities. The principle of one way troop movement prevents this risk [13]. However a crowded clash occurred at Mina in 2015. Seven Tunisian’ pilgrims died in this calamity. It was about 35% of total Tunisian’s death in 2015. Also we report individual traumatic injuries in relation with falls. These accidents are usually without vital consequences.

Acute exacerbation of chronic illness represent the forth challenge redoubt. Since our pilgrims are mostly elderly and 30% of them suffer from chronic diseases. In our study acute coronary syndrome is the most risk. It seems that incidences of acute severe illness in relation with cardiovascular diseases are increasing last year’s [14]. We recommend a rejuvenation of Tunisian pilgrims by adopting the approach of quotas based on age groups.

This cohort study respond clearly to our inquires about heat stroke risk among Tunisians pilgrims and can be a useful tools for making decision to prevent pulmonary infectious diseases and acute coronary syndrome as the most redoubtable acute accident of chronic illness. We should consider further studies to cover other Nations.

The authors declare no conflict of interest in connection with the manuscript.

Copyright: © 2018 Hamouda C, et al. This is an open-access article distributed under the terms of the Creative Commons Attribution License, which permits unrestricted use, distribution, and reproduction in any medium, provided the original author and source are credited.