Fungi are non-photosynthetic protists growing as a mass of branching, interlocking filaments (hyphae) known as mycelium. Although the hyphae exhibit cross walls, the cross walls are perforated and allow free passage of nuclei and cytoplasm. The entire organism is thus coenocyte which is a multinucleated mass of continuous cytoplasm confined within a series of branching tubes [1].

All fungi are eukaryotic organisms and each fungi cell has at least one nuclear membrane, endoplasmic reticulum, mitochondria and secretory apparatus. Most fungi are obligate or facultative aerobes. They are chemotrophic, secretory enzymes that degrade wide variety of organic substrates into solute nutrients which are then passively absorbed on taken into the cell by active transport [2]. Fungal contaminant are also responsible for substantial effects in stored foodstuffs including discoloration, losses of nutritional value, product of odors, deterioration in technological quality and contamination of mycotoxin [3,4].

Cassava production is primarily used for human consumption. It represents staple food and a major contributor to food security in producing areas and Africa consume almost its entire production. Cassava products fermented or not, are also devoted to foodstuff [5]. Cassava tubers are processed into an amazing variety of foods. Traditionally processing techniques varies from region and ethnic group with a given area. In Africa, the two common products of Cassava tubers are farina (gari) and fufu (sticky dough made by pounding cooked of fermented tubers into paste. Garri is the product of Cassava tubers obtained from peeled, grated, fermented and roasted Cassava tubers. It is consumed by several millions of people of West Africa [1].

This study was aimed at determining the fungi (mold) associated with Cassava farina sold in Dutsinma metropolis with the following objectives; to access Cassava farina for the presence of molds and to isolate and identify molds in farina.

The study was carried in Dutsinma Local Government Area of Katsina State Nigeria. It has a total land area of about 527 km2 and a population of 1,190,711 as at the 2006 census. Dutsinma is situated on latitude 12.4728° N and Longitude 7.4860° E North West of Nigeria. The inhabitants of the area are predominantly Hausa’s and Fulani’s. Their main occupation is farming and animal rearing. Dutsinma lies in the savanna zone of Northern Nigeria, it experiences two distinct seasons: the dry season which lasts from October to May and the raining season which is between June to September. Inhabitants are predominantly farmers and rearers.

A total of 150 samples of garri were collected at random from three major markets within Dutsinma metropolis including Wednesday market, Abuja road market and Old market for assessment. Samples were collected in sterile plastic containers and transported to Biological Sciences laboratory of Federal University Dutsinma for analysis.

The spread plate count method as described by Ogiehor et al. [1] was used by weighing 10 g of each processed sample aseptically into 90 ml of 0.1% (w/v) sterile peptone water in a sterile 500 ml beaker, and allowed to stand for 5 min with occasional stirring using a magnetic stirrer. Further serial dilution method was carried out using 1 ml of initial suspension in the beaker in 9 ml of sterile distilled water in a 1:10 dilution to obtain up to 10-5 dilutions as described by Jonathan et al. [6].

The moisture content was determined by weighing 5.0 g each of all the samples and drying in an oven maintained at 105°C for 7 to 8 h for a constant weight to be obtained. Thereafter, they were stored in desiccators to cool and then re-weighed. The difference in weight was used to obtain the moisture content as described by AOAC et al. [7].

Isolation and identification of moulds

A 0.1 ml of each dilution prepared earlier was pipetted and spreadplated in sterile Petri dish containing potato dextrose agar (PDA) with 0.1% concentrated lactic acid to inhibit bacterial growth. Inoculated plates were thereafter incubated at 28°C for 5 to 7 days. Total viable fungal counts was carried out and expressed as colony forming units per gram (CFUg-1 ) of sample after incubation. Identification of the isolated moulds based on their morphological and cultural characteristics was carried out using the descriptions of Alexopoulus et al. [8].

The various data obtained from this study were subjected to statistical analyses: ANOVA and student’s t test to compare significant differences of means (p< 0.05) in the white and yellow garri using statistical software, SPSS version 17.0. 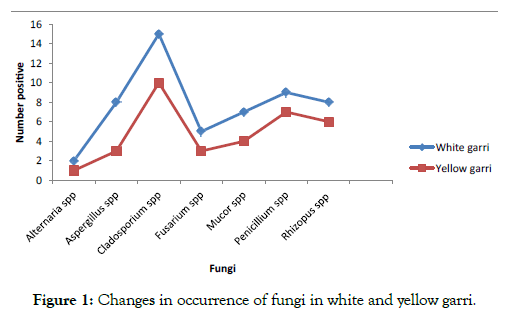 Figure 1: Changes in occurrence of fungi in white and yellow garri. 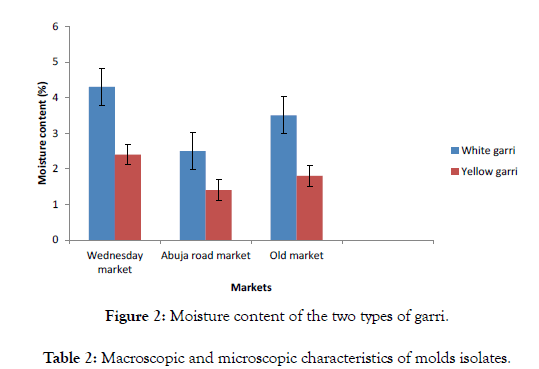 Figure 2: Moisture content of the two types of garri.

Identification of the isolated moulds based on their morphological and cultural characteristics was carried out using the descriptions of Alexopoulus et al. [8] (Table 2).

The moulds isolated had different rates of appearance in the samples assessed with the presence of Alternaria spp, Aspergillus spp, Cladosporium spp, Fusarium spp, Mucor spp, Penicillium spp. and Rhizopus spp. and varied significantly (P≥0.05) in the white and yellow garri respectively. The mould contamination could have been introduced during local method of processing, exposure to bio-aerosols during sale in the market and post processing handling of such product [1,9,10].

Cladoporium spp. recorded the highest frequency of occurrence with 20% and this agrees with the work of Peter et al. [11] who recorded high prevalence in Ghana. This result agrees also with the work of Ogiehor et al. [12] who isolated similar fungi from fermented Cassava not handled hygienically. Obadina et al. [13] also reported the isolation of similar moulds from their study on garri during assessment of some fermented Cassava products. Results also show that yellow and white garri harbours array of fungal contaminants reported in other studies [1,14]. Cladosporium spp. was the most predominant mould isolated from both white and yellow garri samples respectively which is in contrast with that of Aguoru et al. [15] and Georgia et al. [16] who reported Aspergillus spp. and Penicillium spp. with highest occurrences respectively. The presence of these moulds in food put the consumers at risk for instance Penicillium spp. contains citrinin which had been reported to have nephrotoxic, hepatotoxic and cytotoxic effects [17]. Aspergillus spp. was been implicated as one of the most important fungi that causes black mold disease in fruits [18], ear infections in human and food poisoning [14].

Identification of the isolated moulds was based on their morphological and cultural characteristics and was achieved by colony appearance, colony colour, colony growth rate, colony morphology, conidial and phialide morphology and size separated all the seven species. Apart from Mucor spp. and Rhizopus spp. which show non septate hyphae, absence of rhizoids and presence of sporangia; Cladosporium spp, Aspergillus spp, Penicillium spp, Alternaria spp. and Fusarium spp. show septate hyphae, presence of rhizoids and absence of sporangia which agrees with the standard characteristics of fungi.

Copyright: © 2020 Orpin JB, et al. This is an open-access article distributed under the terms of the Creative Commons Attribution License, which permits unrestricted use, distribution, and reproduction in any medium, provided the original author and source are credited.