Background: The use of autologous blood products to treat degenerative tissue disorders is receiving increasing interest. A new procedure using gold particles to stimulate the production of various proteins in patients owns blood (GOLDIC) was investigated.

Materials and Methods: 36 horses (37 cases) with the clinical signs of lameness were enclosed in this study. The causes for lameness was chondromalacia (n=19) or soft tissue disorders (n=18). The horses were treated by four injections of gold-induced, autologous-conditioned serum. The conditioning process included the incubation of the autologous serum with solid gold particles over 24 hours (GOLDIC procedure). 28 patients had undergone a previous therapeutic intervention, whereas 9 had not. Horses were assessed for lameness using the AAEP grading scale (0=no lameness, 5=severe lameness). Swelling and/or effusion were evaluated in an equal scale between 0 and 5 (0=no swelling/effusion, 5=severe swelling/effusion). Scores were collected at pretreatment after one, two, and three weeks, respectively, and after three and six months post-treatment. AAEP grading scale score was defined as the primary parameter. A P-value of less than 0.05 was considered statistically significant.

Results: In all 37 cases, a significant reduction of lameness, effusion (joint group) and swelling (soft tissue disorders group) within 3 weeks after treatment (P<0.05) was found. Up to 3 and 6 months after treatment, all horses were free of symptoms. There were no major side effects noted throughout the study.

Conclusions: This study provides positive evidence for the use of gold-induced, autologous-conditioned serum in different equine lameness-associated diseases.

Due to an increasing demand for alternative methods of nonsurgical management of soft-tissue and musculoskeletal conditions, the use of biologics such as Platelet-Rich Plasma (PRP), mesenchymal stem cells, conditioned autologous serum (IRAP/ORTHOKIN), or growth factors is becoming more common. But, on the other hand, there is little evidence in the peer-reviewed published literature to permit conclusions regarding the effectiveness of autologous-derived products for the treatment of soft tissue and musculoskeletal disorders [1].

In the veterinary field, the use of conditioned autologous serum is very popular. IRAP has been shown to stimulate the production of IL-1Ra from cultured peripheral blood of human patients [2]. Various studies in both horses and humans have evaluated the use of a natural IL-1 receptor antagonist to block IL-1 activity and decrease the progression of joint diseases. The IRAP/ORTHOKIN system uses glass beads exposed to chromium sulfate as a method to stimulate peripheral WBCs to produce an anti-inflammatory cocktail [3]. In our own studies, the use of gold particles instead of glass beads leads to a significant increase of anabolic cytokines and other important proteins like gelsolin [4]. The clinical relevance of this finding is unclear.

Gold, as a beneficial remedy, was used already in ancient Egyptian and China. The main compounds involved are hydrophilic gold(I) oligomeric ring or chain structures, gold(I) thiolates (AuSR) –SR being thiomalate and thioglucose, respectively, reacting extensively with cysteines in proteins/peptides, but also being oxidised to gold(III) complexes. In general, some 60% of the patients exhibited a significant but slowly developing effect of the gold thiolates. In vivo studies have demonstrated a stimulating effect on Ig-production using low doses of gold. Due to the significant side effects, the gold therapy in rheumatology was left largely in the meantime.

The GOLDIC procedure was developed to enhance the therapeutic effects of gold on the cellular level in combination with the advantages of an autologous blood therapy.

The purpose of this study was, to evaluate the evidence for the use of gold-induced, autologous-conditioned serum in different lamenessassociated equine diseases.

This study was designed as a prospective clinical trial. 36 horses with the clinical sign of lameness were enclosed. Mean age was 10.4 (±4.8) years. One horse was treated on both sides. The cause for lameness was a cartilage demage in 19 cases and soft tissue disorders like tendinosis or sesamoidosis in further 18 cases. Most of the animals were pretreated by various methods (Table 1). At the beginning of the study, all horses were examined by an experienced veterinarian. All evaluated parameters (lameness, effusion, swelling) were documented in a standardized protocol (Table 2).

H=117.6 with 5 degrees of freedom. (P=<0.0001).
The differences in the median values among the follow-up groups are greater than would be expected by chance; there is a statistically significant difference (P=1.03E-023).
All pairwise multiple comparison procedures (Student-Newman-Keuls method):

Table 2: Statistical analysis of lameness at each time point. Lameness: Kruskal-Wallis one way analysis of Variance on ranks.

Horses were assessed for lameness using the AAEP grading scale (0=no lameness, 5=severe lameness). Swelling and/or effussion were evaluated in an equal scale between 0 and 5 (0=no swelling/effusion, 5=severe swelling/effusion). Horse examinations took place right before the treatment and at week 1, 2, 3, 12, and 24. All adverse events were documented.

The gold-induced, autologous-conditioned serum was produced in accordance to the manufacturer’s guidelines (Arthrogen GmbH). The first injection was performed on Day 1 after serum incubation; the other three serum aliquots were stored at -20°C until the designated day of injection. Horses were treated by four injections of approximately 4ml of autologous conditioned serum. On Day 7, the horses began a strenuous exercise regimen five days per week for the remaining 24 weeks of the study.

Based on a previous pilot study a power analysis determined the number of required patients for this study. AAEP score was defined as the primary parameter. An improvement of 1 point was considered clinically important. A sample size of 35 patients was required for α=0.05 and power=0.80, considering a standard deviation of 1.2. Therefore, we included 37 cases in 36 patients in our study.

Statistical analysis (Sigma Stat 3.5) was performed by an independent statistician. Normality test failed in AAEP scale, effusion and swelling, therefore data were analysed by Kruskal-Wallis One Way Analysis of Variance on Ranks (Tables 3 and 4). Post hoc tests were performed with the Student-Newman-Keuls Method up to 6 months. Reported P values with a level of >0.05 indicating significance. Graphs were drawn using Xact 6.02 by SciLab (Figures 1-3).

H=57.5 with 5 degrees of freedom (P=<0.0001).
The differences in the median values among the treatment groups are greater than would be expected by chance; there is a statistically significant difference (P=3.91E-011).
All pairwise multiple comparison procedures (Dunn's method):

Table 3: Statistical analysis of effussion at each time point. Effusion: Kruskal- Wallis one way analysis of variance on ranks.

H=69.5 with 5 degrees of freedom (P=<0.0001).
The differences in the median values among the treatment groups are greater than would be expected by chance; there is a statistically significant difference (P=1.33E-013).
All pairwise multiple comparison procedures (Dunn's method):

Table 4: Statistical analysis of swelling at each time point. Swelling: Kruskal-Wallis one way analysis of variance on ranks. 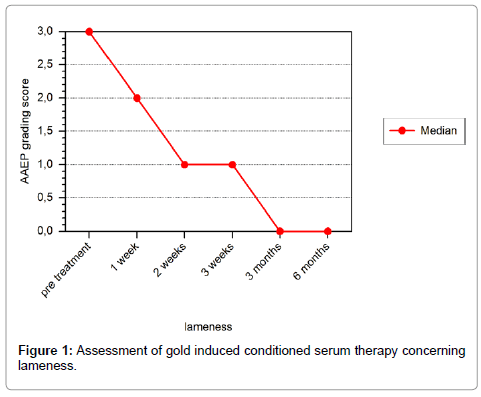 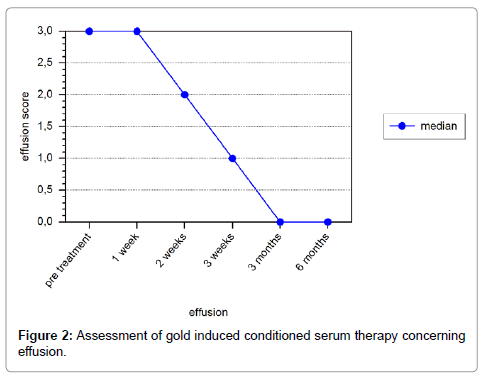 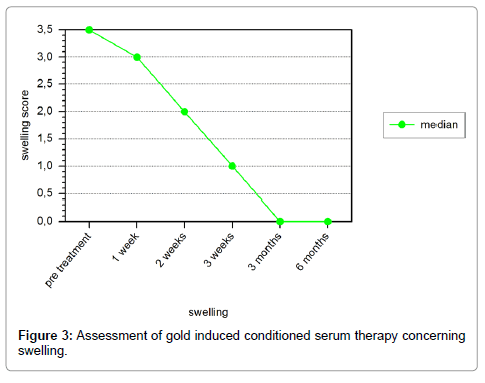 All 37 cases completed the study. A significant reduction of lameness, effusion (osteoarthritis group), and swelling (soft tissue disorders group) within two weeks of treatment was found. Up to 3 and 6 months after treatment, all horses were free of symptoms. A statistically significant improvement of all clinical scores was obtained from the basal evaluation, to the end of the therapy and then at both the 3 and 6 month follow-ups. The results further improved from the end of the therapy to the 6 month follow-up.

There were no major side effects noted throughout the study. 5 cases showed a local pain reaction after the injection for a few hours (maximum 48 hours in one case). This reaction occurred mainly after the first injection.

The use of autologous-conditioned serum in the treatment of several degenerative diseases is of increasing interest in the field of human and horse medicine. Several clinical studies show beneficial results [5]. IL-1 blocking activities seem to be the most important factor in this treatment strategy [6,7]. In the IRAP/ORTHOKIN-procedure, this could be achieved by using glass beads exposed to chromium sulfate as a method to stimulate peripheral WBCs [2]. In our own in vitro studies, gold particles were used instead of glass beads to stimulate a biological response of blood cells [4].

Gold is a very well know element in the treatment of several rheumatic diseases. Analyzing the actions of gold in the different phases of an immune reaction suggests that gold plays an important role already in the initiation, namely, the uptake and presentation of foreign antigens. Thus, gold is taken up by the macrophages and stored in the lysosomes, which are called aureosomes, where gold inhibits antigen processing. Moreover, it has been shown that gold suppresses NF-kappa B binding activity, as well as, the activation of the I-kappa B-kinase. This mechanism results in a subsequently reduced production of proinflammatory cytokines, most notably TNF-alpha, interleukin-1 and interleukin-6. On the subsequent T-cell level, gold has been shown to induce an upregulation of IL-4 mRNA, resulting in a shift of the T-cell population to the Th2 phenotype. Moreover, the activation of T-cells is inhibited [8].

In the present study, a new approach using gold particles to interact with blood cells in an extracorporal setup is utilized. This procedure is called GOLDIC (gold-induced cytokines). The aim of this study was to evaluate the clinical efficacy of this procedure in horses with different lameness-associated diseases. After performing the GOLDIC injections the horses showed a significant reduction of lameness, effusion (joint group) and swelling (soft tissue disorders group) within 3 weeks after treatment (P<0.05). Up to 3 and 6 months after treatment, all horses were free of symptoms. The therapy was well tolerated. A local pain reaction after the injection could be found in only 5 cases for a short period of time. There were no major side effects noted throughout the study. The evaluation of collected blood samples from the different treated horses could not be performed due to a technical problem of the storage procedure.

The analysis of blood samples with human blood showed that the GOLDIC technology triggers increased production of certain cytokines and important proteins like gelsolin [4]. Gelsolin is a highly conserved, multifunctional actin-binding protein with an extracellular isoform, plasma gelsolin, for which there is not yet a clearly defined function. The secreted form of gelsolin has been implicated in a number of processes such as the extracellular actin-scavenging system and the presentation of lysophosphatidic acid and other inflammatory mediators to their receptors, in addition to its function as a substrate for extracellular matrix-medulating enzymes. Consistent with these proposed functions, blood gelsolin levels decrease markedly in a variety of clinical conditions such as acute respiratory distress syndrome, sepsis, major trauma, prolonged hyperoxia, malaria, liver injury, rheumatoid arthritis, cancer, apoptosis, infection and inflammation, cardiac injury, pulmonary diseases, and aging [9]. This protein also plays a key role in the differentiation of stem cells to cartilage cells [10]. The activation of stem cells via a gelsolin-mediated regeneration process can be seen as a new approach to stimulate the body’s own repair processes.

Unfortunately we could not analyse the blood samples of the treated horses and we could not take biopsies of the treated cartilage or connective tissue area. Based on the impressive clinical results of this study we are investigating now the influence of the GOLDIC therapy on several blood protein levels and the morphological changes in a well established animal model [11].

In conclusion we can state that this case series study provides positive evidence for the use of gold–induced autologous conditioned serum in 37 cases. The main limitation of the study is that a control group was not included. Future comparative clinical studies have to be performed to investigate the potential of this new approach in comparison to other serum-based therapies and the present standard therapies.

Copyright: © 2013 Schneider U, et al. This is an open-access article distributed under the terms of the Creative Commons Attribution License, which permits unrestricted use, distribution, and reproduction in any medium, provided the original author and source are credited.
Top