Magnetic resonance imaging (MRI) provides a nonionizing and safe imaging modality for cancer diagnostics. Here, we took advantage of the fibrin deposition that is characteristic of tumors and the ability to incorporate multiple functionalities within peptide amphiphile micelles (PAMs) to design a new class of contrast agents for molecular MRI. We report on synthesis, formulation, and preliminary tests for MRI of spherical PAMs that were self-assembled by combining 18:0 PE-DTPA (Gd) and peptide amphiphiles containing the fibrin-binding pentapeptide, cysteinearginine- glutamic acid-lysine-alanine, or CREKA. Conjugation of the CREKA peptide to micelles increased the average particle size and zeta potential, and T1 relaxivities of CREKA-Gd PAMs (per mmol of Gd) were found to be comparable to contrast agents which are used routinely in clinical settings at 1.5T and 3T. Moreover, when murine fibroblasts were cultured with CREKA-Gd PAMs, no cytotoxicity was demonstrated and cell viability was comparable to that of PBS-treated controls for up to 3 days.Our study provides proof-of-concept of CREKA-Gd PAMs as contrast agents for molecular MRI, and a facile strategy for incorporating contrast agents and bioactive molecules into nano carriers to develop safe, targeted diagnostic carriers for clinical application.

Magnetic resonance imaging (MRI) is a preferred diagnostic imaging modality of cancer evaluation because it is noninvasive, does not use ionizing radiation, and provides strong soft tissue contrast [1]. Nanocarriers can be combined with complexes of paramagnetic compounds such as gadolinium (III) (Gd) to passively target tumor tissue and deliver Gd through the enhanced permeability and retention (EPR) effect [2-4].However, the inherent low relaxivity and low specificity to tissues limit applications of this approach [5].

Our group has successfully developed a fluorescently-labeled, fibrin-binding peptide amphiphile micelle (PAM) for cancer targeting using the pentapeptide, cysteine-arginine-glutamic acid-lysinealanine (CREKA) [4,6,7]. Fibrin-targeting is an effective strategy for selectively enhancing cancers because tumors, but not normal tissues, haveleaky, hemorrhagic vasculature, which contributes to thrombosis and fibrin deposition [8,9]. PAMs are advantageous as therapeutic and/ or diagnostic carriers because a concentrated, multivalent display of a peptide can produce efficient binding to a molecular, tumor target of interest [5,10]. Moreover, the nanometer size of PAMs including a poly(ethylene glycol) (PEG) protective shell provides favorable pharmacokinetic properties in vivo and can prolong bioavailability and deliver drugs and contrast agents in the optimum dosage range, which results in reduced, toxic side effects [11].

In order to integrate the molecular targeting capabilities of PAMs and the diagnostic performance of MRI, we combined peptide amphiphiles (PA) consisting of the CREKA peptide and 18:0 PEDTPA (Gd) to self-assemble micelles that can be utilized as molecular MRI contrast agents for tumor-targeting. Unlike other nanoparticle systems in which Gd is covalently incorporated into the structures of nanocarriers, increasing the risk of Gd3+ ion leakage from the chelates due to the prolonged half-life in the body and cumulative toxicity [12], our micelles were designed such that tumor-targeting, imaging, and release of 18:0 PE-DTPA (Gd) can be easily achieved. In this study, we assessed the potential of these novel CREKA-Gd PAMs as contrast agents for MRI applications and evaluated biocompatibility in vitro.

CREKA-Gd PAMs were assembled by dissolving DSPE-PEG (2000)-CREKA amphiphiles and 18:0 PE-DTPA (Gd) (Avanti Polar Lipids, Alabaster, AL, USA) in chloroform (75:25 molar ratio, unless otherwise stated), mixing the components, and evaporating the mixed solution under nitrogen gas. The resulting film was dried under vacuum O/N, and then hydrated at 80°C for 30 minutes in PBS under sonication, and allowed to cool to RT. Non-targeting, control- Gd PAMs were self-assembled by combining 18:0 PE-DTPA (Gd) and DSPE-PEG(2000)-maleimide.

Samples for TEM were prepared by placing the 100 μM CREKAGd or control-Gd PAM solution on 400 mesh lacey carbon grids (Ted Pella, Redding, CA, USA) for 2 minutes. Excess liquid was wicked away with filter paper and the grid was washed with Milli-Q water. Dried samples were imaged on a JEOL 1230 TEM, immediately (JEOL, Ltd., Tokyo, Japan).

Stock solutions of 100 μM CREKA-Gd or control-Gd PAMs were used to confirm the presence of small spheroidal micelles and DLS measurements were determined at 90° and 637 nm using a Brookhaven Instruments (Holtzville, NY, USA) system consisting of a BI-200SM goniometer and a BI-9000AT autocorrelator (N=3).

Where M (TI) is the measured signal at each inversion time (TI) and Mo is the equilibrium magnetization. These fits yielded a T1 value for each voxel. The mean T1 for each sample, and thus each concentration of Gd, was measured by drawing regions of interest in all the vials, which had a cross sectional diameter of 9 mm in the acquisition plane.

In the fast exchange limit, the longitudinal relaxation rates have a linear relationship with contrast concentration, where the relaxivity of the contrast media (r1) is the slope of the curve (Equation 2):

where T1,0 is the native T1 (in the absence of any contrast media) and C is the concentration. The T1 values measured from the FSE FSEIR data at both 1.5T and 3T were fit to Equation 2 to determine the relaxivity at each field strength.

The T1 and T2 relaxation times of the control-Gd and CREKAGd PAMs were measured at 1.5T. A FSE-IR sequence, with the same acquisition parameters as described above, was acquired to measure T1. The T2’s were measured with a spin echo (SE) sequence with varying echo times (TEs). The SE were acquired with the following acquisition parameters: TR = 100 ms; TE’s = 8, 10, 15, 20, 30, 40, 50 ms; acquisition voxel size of 1 mm × 1 mm and 3 mm slice thickness. FSE-IR data were fit to Equation 1 to determine the T2. The SE data were fit to the spin echo signal model to obtain estimates of T2 (Equation 3):

The mean T1 and T2 values of control-Gd and CREKA-Gd PAMs were calculated by drawing ROIs over the vials in the calculated T1 and T2 maps.

The murine fibroblast cell line NIH/3T3 was purchased from ATCC (Manassas, VA, USA) and cultured and expanded in Dulbecco’s Modified Eagle’s Medium supplemented with 10% fetal bovine serumand 1% penicillin/streptomycin. Cells were cultured at 37°C in a humidified incubator under 5% CO2. Cells at passage 3 were used and media was changed every 2-3 days.

Data are expressed as mean ± SEM. A Student’s t-test was used to compare means of pairs and analysis of variance (ANOVA) using Tukey multiple comparison test post-hoc analysis to determine significant differences among three or more means. A p-value of 0.05 or less was considered to be significant. When the Gd content was changed within CREKA PAMs and micelles were constructed with varying 18:0 PE-DTPA (Gd) to DSPEPEG (2000)-CREKA ratios, an increase in Gd led to a decrease in T1 measurements via both 1.5T and 3T as expected [13], confirming the modularity of PAMs as contrast agents for MRI (Table 2). T1 relaxation times upon incorporation of 50 mol. % Gd into micelles were 183.4 ± 0.9 ms and 223.1 ± 1.54 ms at 1.5T and 3T, respectively, which increased to 381.3 ± 2.2 ms and 434.2 ± 5.3 ms with 25 mol. % Gd, and 890.9 ± 2.2 ms and 970.0 ± 3.0 ms with 10 mol. % Gd. Without any Gd, T1 measurements of micelles were similar to that of water (2.7 s) [14]. Furthermore, Figure 2 shows that the T1 relaxivity (r1) of CREKA-Gd was 9.87 mM-1s-1 at 1.5T and 8.08 mM-1s-1 at 3T (where the units are in millimoles of Gd). These relaxivities are higher than those of several contrast agents used routinely in clinical settings [15], suggesting that areas with higher uptake of CREKA-Gd will be easily visualized in T1- weigthed images in vivo. This may be explained by enhanced rotational correlation times and spectral density characteristic to Gd3+ complexed with macromolecules such as polymers or proteins [16]. Moreover, our results are consistent with other groups who report nanoparticles with Gd3+ bound to PE-DTPA to show a strong paramagnetic relaxation effect on surrounding water protons [17]. Interestingly, micelles consisting entirely of 18:0 PE-DTPA (Gd) had relaxation times of 386.6 ± 2.72 ms and 465.8 ± 2.54 ms at 1.5T and 3T, respectively (data not shown). This phenomenon is likely to result from the proximity of paramagnetic ions to one another within micelles as reported for liposome systems consisting of PE-DTPA (Gd), as well as for the relaxivity of Mn2+ ions bound to phosphatidyl serine sonicated vesicles [17,18]. Thus the Gd complex appears most efficient as a contrast agent when present at lower local concentrations in micelles.

Figure 2: Change in relaxation rates Δ(1/T1) vs. concentration of CREKA-Gd PAMs in both 1.5T (A) and 3.0T (B) magnets demonstrates linear correlation.

In order to confirm the potential of CREKA-Gd PAMs as safe contrast agents for future MRI applications in vivo, cell biocompatibility and viability were assessed using NIH/3T3 fibroblasts in vitro. Live/ Dead assays confirmed fibroblasts cultured with 100 μM control-Gd or CREKA-Gd for 1 or 3 days were viable with few-to-no dead cells, and were comparable to PBS-treated controls (Figure 3). Moreover, Presto Blue assays further verified cell viability upon treatment with CREKAGd PAMs for up to 3 days (Figure 4). 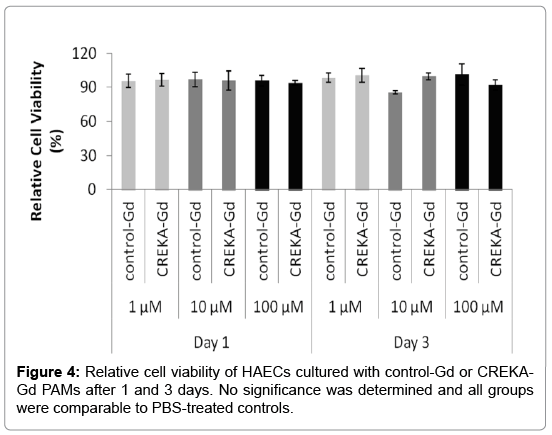 Figure 4: Relative cell viability of HAECs cultured with control-Gd or CREKAGd PAMs after 1 and 3 days. No significance was determined and all groups were comparable to PBS-treated controls.

In summary, the fibrin-binding peptide amphiphile was combined with 18:0 PE-DTPA (Gd) to construct CREKA-Gd PAMs as contrast agents for potential MRI applications. Our micelles provide a multifunctional platform that can be easily tailored to incorporate contrast agents such as Gd, targeting peptides, and therapeutics for potential theranostic applications. Future in vivo studies within a tumor model will provide the full extent of our novel micelles as safe and potent nanocarriers that can be utilized to detect, image, and treat tumors.

The authors made use of the equipment and acknowledge assistance from the Mass Spectroscopy Facility, the NSF Materials Research Science and Engineering Center (MRSEC), and the Brain Research Imaging Center (BRIC) at the University of Chicago. This work was supported by an American Heart Association Postdoctoral Fellowship granted to E.J. Chung. There are no conflicts of interests.

Copyright: © 2014 Chung E, et al. This is an open-access article distributed under the terms of the Creative Commons Attribution License, which permits unrestricted use, distribution, and reproduction in any medium, provided the original author and source are credited.
Top