Fentanyl is a potent analgesic that is almost a hundred times accented than morphine, the use of fentanyl is pain allayer and anesthetic was adopted in the medical primed. Fentanyl was first introduced by Dr. Jansen in 1959. Many type of fentanyl derivatives have been developed by adding respective substituents to the canonic molecule inorder to alter the potency, some of the ensunting molecules may exist as isomers. (The isomers of 3-methylfentanyl), which have different types of analgesic potencies depends on which is used. Bever reported that the 3rd position of a methyl group (-CH3) into the piperidine ring, increases analgesic potency. The Trans isomer was slightly more active agent than fentanyl, but its respective cis form was eight folds more active. They found that activity of the cis (+) 3-methylfentanyl more potent than fentanyl, whereas the cis negative form was less potent.

Fentanyl is a potent analgesic that is almost a hundred times accented than morphine, the use of fentanyl is pain allayer and anesthetic was adopted in the medical primed. Fentanyl was first introduced by Dr. Jansen in 1959 [1-4].

Many type of fentanyl derivatives have been developed by adding respective substituents to the canonic molecule inorder to alter the potency, some of the ensunting molecules may exist as isomers. (The isomers of 3-methylfentanyl), which have different types of analgesic potencies depends on which is used [5-8].

Bever reported that the 3rd position of a methyl group (-CH3) into the piperidine ring, increases analgesic potency.

Fentanyl is a synthetic opioid related phenyl piperidine opioid agonist with the analgesic and anesthetic properties. Fentanyl acts on the mu-receptor in the central nervous system. Fentanyl stimulates the exchanges of GTP for GDP on the G-protein complex inhibits adenylate cyclase, results in a decrease in intracellular cAMP and leads the reduction in release of neurotransmitters substance like GABA, dopamine, acetylcholine and noradrenaline. The analgesic activity of fentanyl is due to the its metabolite morphine, show stimulation the opening of G-PC (G-protein coupled receptor inwardly regenerated potassium channels and blocks the opening of N-type voltage gated calcium channels resulting in hyperpolarization and reduced neuronal votability.

Fentanyl is a piperidine derivative opioid analgesic. The systematic IUPAC name is N-(1-(2-phenethyl)-4-piperidinyl-N-phenylpropanamide.

Fentanyl having its two forms as follows. 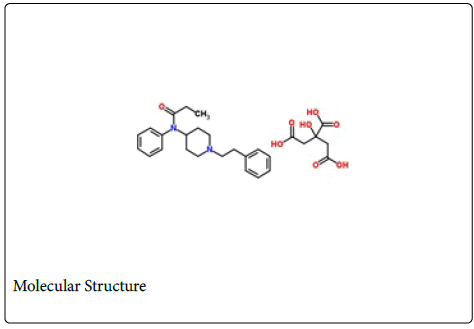 Physical characteristic which can be used for the identification of fentanyl and its salts is that appears as white crystalline powder, due its water-soluble action fentanyl citrate is mostly used for the oral buccal dosage form (buccal lozenges) and transdermal patches, transmucosal [14-16].

Fentanyl is the potent opioid analgesic. Fentanyl interacts with the opioid mu-receptor and binds with kappa (κ) and delta-type opioid receptors also. These mu-binding sites are broadly distributed in the human spinal cord, brain, and other tissues. In clinical Fentanyl show its principal pharmacologic action on the central nervous system. Its therapeutic action values are analgesia and sedation. Fentanyl depresses the respiratory centers, depresses the cough reflex, and constricts the pupils as binding the mu (μ) receptor [17-22].

Fentanyl is a pure opioid agonist, acts as interacting with opioid mureceptors located in the brain, spinal cord and smooth muscles. The primary site of therapeutic action is the central nervous system (CNS). Clinically use of fentanyl pharmacologic consequence of the interaction of fentanyl with mu-receptors is analgesic and sedative [23-26].

Opioids increase the muscle tone action and decrease the contraction of the smooth muscle in the GI tract. This the results of prolongation of GI transit time and responsible for the constipating effect of opioids. The opioids increase biliary tract pressure and some patients with biliary colic may undergo declension of pain.

Opiate receptors coupled with G-protein receptors and act as both positive and negative regulators for synaptic transmission G-proteins that activate effective proteins. Receptor binding of the opiate stimulates exchange of GTP to GDP on the G-protein complex. As system is adenylate cyclase and cAMP situated at the endo surface of the plasma membrane, opioids decrease intracellular cAMP by inhibiting adenylate cyclase. Opioids also show the inhibitory action the release of vasopressin, somatostatin, glucagon and insulin. The most analgesic activity of the fentanyl is due to its conversion to morphine [27-30].

The pharmacokinetics as absorption of fentanyl drug from the oral transmucosal drug delivery is a combination of an initial rapid absorption from buccal mucosa and more prolonged absorption of the swallowed fentanyl from the GI tract. Both the blood profile and the bioavailability of fentanyl will depend the fraction of the dose that absorbed through the oral mucosa and the fraction swallowed. The onset of action as IV (Intra venous) administration is rapid, the analgesia peak occurs within several minutes and the duration of analgesia action is 30-60 minutes after a single dose up to 100 μg [31-36].

Generally, ¼ part (25%) of the total dose of fentanyl is rapidly absorbed in the bucal mucosa and show the systemically availability. The left over ¾ parts (75%) of the total drug dose is swallowed in the saliva and slowly absorbed from the GI tract. About 25% of this amount (¼ of the total dose) escapes hepatic and intestinal first-pass elimination and able for systemically availability. Thus, generally observed 50% bioavailability of the oral transmucosal fentanyl citrateis divided between rapid transmucosal and slower GI tract absorption [37,38].

Fentanyl metabolized in human cytochrome P450 3A4 in isoenzyme system and eliminated by urinary system, after intravenously rout of Fentanyl approximately 75% (3/4 part) of drug is excreted by the urinary system within 72 hours [42-44].

Analgesia: The analgesic activity of fentanyl depends on the blood plasma drug level. These are the indicates for the relief of mild to severe pain [45,46].

Acute pain: Opioids are the most effective agents for the treatment of acute and severe pain for short term relief and it also controls to severe acute pain treatment. They have also been found to be important in treatment of rheumatoid arthritis and Cancer pain [47,48].

Central nervous system: Fentanyl depresses the cough reflex by the suppressing cough center in the medulla. Antitussive effects occur with the doses lower than the dose required for analgesia.

Gastrointestinal system: Fentanyl causes reduction in motility increase in muscle tone in the antrum of the stomach and duodenum. Digestion for foods is delayed in the small intestine and the propulsive contractions are decreased. Propulsive peristaltic waves in the colon are decreased the tone may increase to the point of spasm results in constipation.

Intranasal: The intranasal bioavailability of fentanyl is about 80-90% but there is imprecision due to clotted pharyngeal swallow nostrils, and incorrect administration [49-52].

Fentanyl having the following side effects [50-54].

• Lower back or side pain

• Change in walking and balance

• Rhythmic movement of the muscles

• Pounding in the ears

• Shakiness in the legs, arms, hands, or feet

Fentanyl may interact with:

• Fentanyl shows the interaction with the mono amino oxidase inhibitors. Like isocarboxazid (Marplan) and phenelzine [55,56].

• Antagonist activity against pentazocine and butorphanol.

• Partial agonist analgesics, such as buprenorphine.

Show the interaction with the anticholinergics agents.

Use of the fentanyl with alcohol may cause of low blood pressure, sedation, respiratory depression, coma, and death.

Fentanyl having the following symptoms on its overdose [57].

Copyright: © 2016 Sharma AK, et al. This is an open-access article distributed under the terms of the Creative Commons Attribution License, which permits unrestricted use, distribution, and reproduction in any medium, provided the original author and source are credited.
Top