Methods: The data were prospectively collected for 102 infertile men with clinical varicoceles. The preoperative values of semen analysis parameters and serum testosterone level were compared with postoperative values at 6 months. Spontaneous pregnancy was assessed at 6 months.

Conclusion: Loupe-assisted subinguinal varicocelectomy is effective in treating male infertility. It leads to significant improvement in semen quality and serum testosterone level. Despite the absence of definitive studies on the impact of varicocelectomy and fertility outcomes, it is reasonable to consider it as an option in selective varicocele patients with semen abnormalities.

Varicoceles are abnormally dilated veins of the pampiniform plexus. For a long, it has been linked with male infertility. It is commonly observed in infertile men and has been associated with abnormalities in semen analyses. It is the most commonly seen, correctable cause of male infertility. It has an incidence of 4.4- 22.6% in the general population [1].

The impact of varicocelectomy on the pregnancy rate of infertile couples is still not clear. Only a few studies exist, with adequate experimental design to completely assess the role of varicocelectomy in the treatment of male infertility [11,12].

Based on current evidence, it is the practice guideline of both the American Urological Association and the American Society for Reproductive Medicine that correction of varicoceles should be offered to infertile men who have palpable varicoceles and one or more abnormal semen parameters [11]. However, the European Association of Urology (EAU) guidelines on male infertility cautioned, that the impact of varicocele treatment on pregnancy rates in infertile couples is uncertain [12,13]. It also stated that although varicocele treatment in adolescents is effective, there is a significant risk of overtreatment in this group of patients [12].

Many studies have analyzed the impact of varicocelectomy on semen quality in infertile men. A Cochrane review [14] reported the effect of varicocelectomy or embolization in subfertile men. It concluded that there is insufficient evidence to indicate varicocele repair, for improvement of spontaneous pregnancy rate in couples. An Italian study group [15] in their meta-analysis reported a significantly higher pregnancy rate in the treatment group than in controls. Both these studies were criticized due to their limitations. Matthews GJ et al. and Gat Y et al. reported a significant increase in sperm concentration after varicoceles repair in men with non- obstructive azoospermia and severe oligoasthenospermia [16,17]. The spontaneous pregnancy rate in these studies was 31% and 34% respectively.

The data were prospectively collected from 102 patients, who underwent varicocelectomy for infertility in our hospital, from August 2016 to August 2018. Diagnosis of varicoceles was made by clinical examination and Colour Doppler. In patients with clinical varicocele, grading was done using classification proposed by Dubin and Amelar [18]. Diagnosis on doppler study was based on detection of two to three venous channels with at least one >3 mm in diameter and presence of reflux during the Valsalva manoeuvre. Venous dilatation of 2.7 mm diameter or less was graded as subclinical varicoceles (grade I).

Patients were instructed to observe abstinence for one day before submitting a semen sample. Semen analysis was performed twice at an interval of 7 days and the average of two values was recorded. All semen samples were analyzed using the standardization of WHO (2010 criteria). Semen analysis and serum testosterone level were repeated postoperatively at 6 months for comparative analysis.

All patients were treated by subinguinal varicocelectomy under spinal anesthesia. SurgiTel micro prism (Micro EVK 350) 3.5x magnification loupes were utilized. The spermatic cord was accessed through 3 cm sub-inguinal incision. All veins within the cord except vasal veins were ligated (with 4-0 vicryl) and divided. The testicular artery was identified and preserved using microvascular doppler. All the patients were discharged on the next day of surgery. Patients were advised not to use any form of contraception and abstain from smoking for the duration of the study. 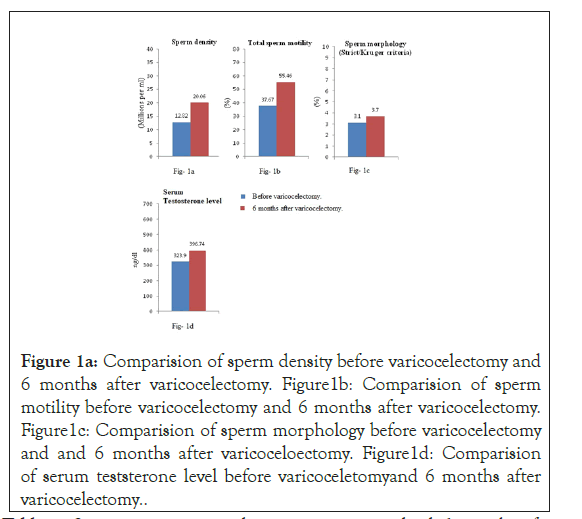 It is evident that varicocelectomy results in improvement of semen quality and serum testosterone level in infertile men. Although subinguinal varicocelectomy using an operating microscope is the gold standard (due to its low complication and recurrence rates), loupe- assisted procedure with microvascular Doppler to spare testicular artery is a more feasible option, in terms of outcomes, cost, and availability. None of our study patients had any complications or recurrence following the procedure. Although varicocele treatment results in improvement of semen quality, its impact on pregnancy rate is still ambivalent. We observed a spontaneous pregnancy rate at 6 months after varicocelectomy of 20.5%. This is less than that reported by previous studies. Ficarra et al. reported a spontaneous pregnancy rate of 36.4% while Marmar et al. reported a rate of 33% at a follow-up of 12 months [15,19]. The main reason for this is possibly the shorter follow-up (of 6 months) of our study. We found that the spontaneous pregnancy rate at 6 months after varicocelectomy was higher in men with secondary infertility (31.25%) compared to those with primary infertility (18.60%). But the difference in rates was not significant.

Values are represented as number

Mansour Ghanaie et al. reported a more significant improvement in sperm concentration compared to other parameters after varicocele repair (Figure 2) [23,24]. The mean improvement in sperm concentration, motility, and morphology was by 75%, 15.9% and 14.3% respectively, at 12 months. They reported a spontaneous pregnancy rate of 44.1% in the varicocele repair group at 12 months (Table 3). Varicocelectomy resulted in the highest improvement of sperm density, which improved by 56.45%, at 6 months follow-up in our study. Sperm motility and morphology improved by 47.23% and 18.97% respectively, at 6 months follow-up. 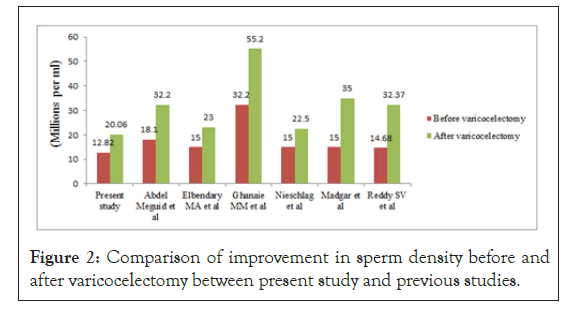 Figure 2: Comparison of improvement in sperm density before and after varicocelectomy between present study and previous studies. 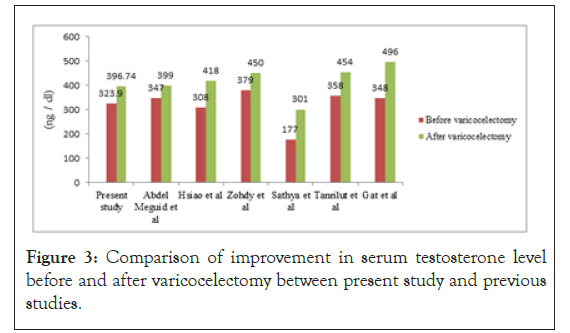 Figure 1: Comparison of improvement in serum testosterone level before and after varicocelectomy between present study and previous studies.

Varicocele remains the commonest treatable cause of male factor infertility. It results in a progressive decline of semen quality and serum testosterone levels. Loupe-assisted subinguinal varicocelectomy is an effective option in treating male factor infertility. Varicocelectomy results in induction or enhancement of spermatogenesis and testosterone secretion in men with clinical varicoceles and abnormal semen parameters. Despite the absence of definitive studies on the fertility outcome of varicocelectomy, it is a reasonable treatment option in selective infertile men with semen abnormalities.

Copyright: © 2021 Kale S, et al. This is an open-access article distributed under the terms of the Creative Commons Attribution License, which permits unrestricted use, distribution, and reproduction in any medium, provided the original author and source are credited.