Facile Synthesis of Some Novel Derivatives of 1,3,4,-Oxadiazole Derivatives Associated with Quinolone Moiety as Cytotoxic and Antibacterial Agents

Facile Synthesis of Some Novel Derivatives of 1,3,4,-Oxadiazole Derivatives Associated with Quinolone Moiety as Cytotoxic and Antibacterial Agents

A new series of 2-(4-substituted phenyl)-5-(6-substituted-2-chloroquinolin-3-yl)-1,3,4oxadiazole derivatives were synthesized after refluxing 6-substituted-2-hydroxyquinolin-3-carboxylic acids with different aromatic acid hydrazides in the presence of POCl3. The chemical structures of these compounds were confirmed by various physico-chemical methods viz. IR, 1H-NMR, EI-Mass, C13-NMR and elemental analysis. Newly synthesized compounds were screened in vitro for their cytotoxic activity against SK-2-MEL cell line. Also, screened in vitro for their antimicrobial activity against varieties of gram-positive and gram-negative bacterial strains and fungi strains Aspergillus niger and Rhizopus. The compound 7a and 7e shows highly significant antimicrobial and compound 7i shows good cytotoxic activity as compared to the standard drug.

The development of new antimicrobial and cytotoxic agents is one of the fundamental goals in medicinal chemistry. In recent years, there has been a concerned search for the discovery and development of potent and selective cytotoxic and antimicrobial agents. N-heterocyclic ring systems are important for the drug design, among these quino line and 1,3,4-oxadiazole compounds are present in several classes of natural and synthetic biologically active compounds.

1,3,4-Oxadiazole is the important heterocyclic moiety in the medicinal chemistry which has been extensively reported in the literature for the synthesis of new biologically active molecules with antibacterial [1], antifungal [2], anti-inflammatory [3], enzyme inhibition [4], anti-HIV [5], analgesic [6], antitumor [7], antihypertensive [8] and anticonvulsant [9] activities. Examples of drugs containing the 1,3,4-oxadiazole unit currently used in clinical medicine are, Raltegravir, an antiretroviral drug, Nesapidil, an anti-arrythmic therapy, Furamizole, a nitrofuran derivative that has strong antibacterial activity and Tiodazosin, an antihypertensive drug. On the other hand, quinoline derivatives have been explored for the diverse pharmacological activities such as HIVintegrase inhibitors [10], antitubercular [11], anti-inflammatory [12], analgesics [13], anticancer [14], antimicrobial [15] etc. Attributable to such biological importance, quinoline derivatives have grown to be the synthetic goals of many organic and medicinal chemistry researchers.

In view of these previous findings and of our interest in the fictionalization of quinolinyloxadiazoles, we report here in on the synthesis of new 1,3,4-oxadiazole derivatives containing quinoline moiety with cytotoxic and antibacterial activities. All the final compounds were characterized on the basis of EI-Mass, 1H NMR, C13 NMR and IR analyses (Figure 1). 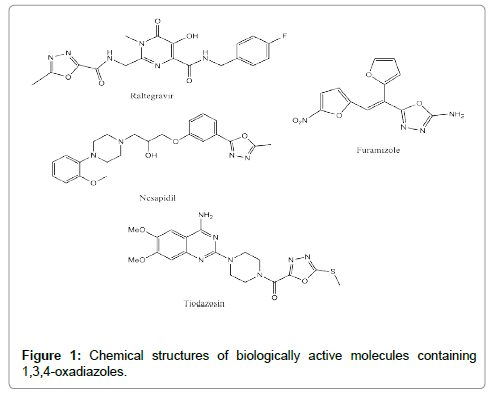 Melting points of the synthesized compounds were determined in open-glass capillaries using GUNA melting point apparatus and are uncorrected. IR absorption spectra were recorded in the 4000-400 cm-1 range on a Shimadzu FTIR-8400s using KBr pellets, 1H-NMR and C13- NMR were recorded on Agilent-NMR, 400 MHz spectrophotometer. EI-Mass spectra were recorded by Agilent-NMR, 400 MHz spectrophotometer. TLC was done on F254 grade silica-60 from SD Fine. Cytotoxic studies were done in Tata Memorial Centre, Advanced Centre for Treatment, Research and Education in Cancer (ACTREC), Mumbai. Antimicrobial studies were done in the Microbiology Laboratory.

General procedure for the synthesis of aromatic ethyl ester, 2(a-c): A mixture of various 4-substituted aromatic acids 1(a-c), ethyl alcohol (50 mL) and 3 mL of conc. H2SO4 were refluxed for 4-6 hrs. The mixture is poured to crushed ice, separated solid was filtered, dried and re-crystallized from minimum amount of ethyl alcohol. The compound was confirmed by the physical data.

General procedure for the synthesis of aromatic carbohydrazides, 3(a-c): To a solution of 2 (a-c) in ethyl alcohol (50 mL) was added with excess of 99% hydrazine hydrate and refluxed for 24 hr on a water bath. Reaction mixture was concentrated and allowed to cool, separated crystals was filtered, dried and re-crystallized from minimum amount of ethyl alcohol. The compound was confirmed by the physical data. 6-substituted-2-chloroquinoline-3-carbaldehyde,4(a-d) was prepared by a reported method [16]. 6-substituted-2-hydroxyquinoline- 3-carbaldehyde, 5(a-d) was prepared by a reported method [17]. 6-substituted-2-hydroxyquinoline-3-carboxylic acid 6(a-d) was prepared by a reported method [18].

General procedure for the synthesis of 2-(4-substituted phenyl)- 5-(6-substituted-2-chloroquinoliN3-yl)-1,3,4-oxadiazole, 7(a-l): To the equimolar mixture of compounds 3(a-c) and 6(a-d), catalytic amount of POCl3 was added and it was refluxed for 4-6 hrs. The reaction mixture was poured over crushed ice and neutralized by sodium carbonate solution. The precipitate formed was filtered and dried. The crude product was purified by the alcohol and DMF mixture (Figure 2). 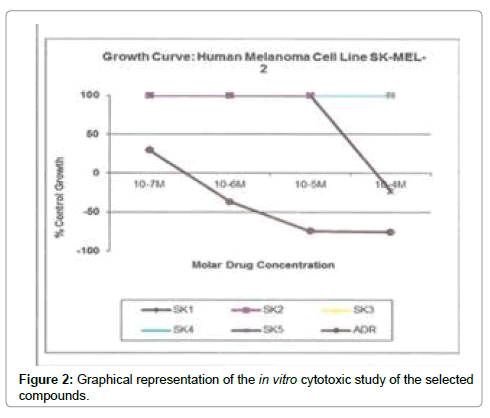 Figure 2: Graphical representation of the in vitro cytotoxic study of the selected compounds.

Among the synthesized compounds few are selected and its in-vitro cytotoxic activity is screened against the SK-MEL-2 cell line. The study is based on the Sulphorhodamine B (SRB) assay [19] water and residual wash solution is removed by a piece of gauze. 100 μl of SRB solution is pipette into each well of the culture plates and allowed to stain for 30 minutes. Residual SRB was removed by using 1% acetic acid and a residual wash is given Table 1. The culture plates are air dried until no moisture is visible. The protein bound dye is solubilized with 100 μl of 10mM Tries base per well. Shake the plates for 10 min to homogenize the dye solution. OD is measured by using ELISA reader at a wavelength of 564 nm and IC50 values are calculated and tabulated in the Table 2. ADR is used as the standard drug and the compound 7i is showing the good activity against the cell line. The graphical representation is shown below.

The in-vitro antibacterial activity of the selected synthesized compounds are screened against five bacterial strains namely, Ralstonia solanacearum, Escherichia coli, Klebsiella pneumoniae (Gram negative), Lactobacillus, Bacillus subtilis (Gram positive). Disc diffusion method was used to determine the Minimum Inhibitory Concentration (MICs μg/mL) in a triplicate experiment. at 10,000 rpm for 5 minutes; a pellet was dissolved in double distilled water and used to inoculate the plates. The autoclaved molten media (20 ml) was poured in each 90 mm Petri plate and allowed to solidify. A circular well of diameter 6 mm was made exactly at the centre of the plates by using cork borer and each well was filled with 0.1 ml of the test solution (10 mg/ml). Chloroamphenecol and DMSO were used as the positive control and negative control respectively. The compounds were tested in triplicate and inhibition zones were measured in mm after 24 hrs of incubation. The results were presented in Table 3.

The in-vitro antifungal activity of the selected synthesized compounds was carried out against two fungi namely, Aspergillus niger and Rhizopus. Disc diffusion method [20] was used. were harvested in sterilized normal saline (0.9% NaCl in distilled water) and its concentration was adjusted to 1 × 106 /ml with a Haemometer. The autoclaved molten media (20 ml) was poured in each 90 mm sterilized petri plates and allowed to solidify. To study the growth response of fungi species, 0.4 ml of the synthesized compound solution (5 mg/ml) was poured into each p incubation, the fungal growth was measured and compared with the control. The fungal activity of selected synthesized compounds was assessed by comparing the zone of fungal growth in treated plates with that of control plates in mm. For comparison, Nistatine was used as the standard drug. The antifungal data were illustrated in the Table 4.

Analytical data of the compounds

In the present work, 1,3,4-oxadiazole derivatives containing 6-substituted-chloroquinoline moiety 7(a-l) were synthesized and characterized on the basis of spectral (1H NMR, C13NMR, EI-Mass and IR) analyses. The synthesized compounds were evaluated for their in-vitro cytotoxicity against Human Melanoma Cell line SKMEL- 2 and antimicrobial activity against different bacterial and fungi strains. Synthetic chemistry involves conversion of corresponding aromatic acids to respective ethyl esters 2 (a-c) and further converted to carbohydrazides 3 (a-c) by refluxing with hydrazine hydrate. 6-substituted-2-chloroquinoline-3-carbaldehyde 4 (a-d) was converted into 6 substituted-2-hydroxyquinoline-3-carboxylic acid 6 (a-d) by hydrolysis with Acetic acid followed by oxidation with KMnO4. The two intermediates 3 (a-c) and 6 (a-d) was refluxed in the presence of catalytic amount of POCl3 and obtained a series of derivatives of 1,3,4-oxadiazole containing 6-substituted-2-chloroquinoline moiety 7 (a-l).

Three gram negative and two gram positive bacterial strains were used for the evaluation of the in-vitro antibacterial screening of the selected synthesized compounds. Chloroamphenecol was used as the standard. Similarly, two fungi strains were used for the in-vitro antifungal screening of the selected compounds. Nistatine was used as the standard. Human Melanoma Cell line SK-MEL-2 was used for the evaluation of in-vitro cytotoxic activity using Sulphorhodamine B assay. Adriamycin was used as standard drug. The results were illustrated in the Tables 2 and 3 respectively. The compound 7i was the potent anticancer agent against SK-MEL-2 with -23.0 at 10-4 μM concentration which is comparable with the cytotoxicity of the standard. Compound 7a showed inhibition on E. coli. Compound 7e showed the inhibition against the Rhizopus. Rest of the compounds showed moderate inhibition on bacterial and fungi strains.

A new series of 2-(4-substituted phenyl)-5-(6-substituted- 2-chloroquinolin-3-yl)-1,3,4-oxadiazole analogues 7 (a-l) were synthesized. The synthesized compounds were moderately active as the growth inhibitors of the Human Melanoma Cell Line SK-MEL-2. The synthesized compounds were also moderately active against different bacterial and fungi strains. Among the selected compounds, 7i was found to be potent cytotoxic agent. The compounds 7a and 7e exhibited good antibacterial and antifungal agent in our study. These results indicated that substituted 1,3,4oxadiazole with 6-substituted- 2-chloroquinoline moiety may be useful leads for cytotoxic and antimicrobial drug development in the future.

The authors express their sincere thanks to the Principal, Sarada Vilas College, Mysuru for providing the laboratory facilities. We are also thankful to the Director, Tata Memorial Centre, ACTREC, Mumbai, for carrying out the cytotoxic studies and also to the Director, Vijnan Bhavan, Mysore University, Mysuru for the spectral data.

Copyright: © 2017 Sudeesh K. This is an open-access article distributed under the terms of the Creative Commons Attribution License, which permits unrestricted use, distribution, and reproduction in any medium, provided the original author and source are credited.
Top