Exhibitors to Bleeding Disorders in the Context of Pre-Eclampsia: Analytical Preliminary Study About 50 Cases at Laquintinie Hospital (Douala, Cameroon)

Exhibitors to Bleeding Disorders in the Context of Pre-Eclampsia: Analytical Preliminary Study About 50 Cases at Laquintinie Hospital (Douala, Cameroon)

Introduction: Pre-eclampsia is one of the major causes of maternal and neonatal morbidity and mortality in the world. The complexity of its etiopathogenesis involves, among other things, age, primi-gravidity, obesity, lack of sensitization to the partner's sperm. Our objective was to describe the socio-clinical profile of the preeclampsia pregnant woman received in consultation in our department and to investigate its influence on certain coagulation parameters (prothrombin level, activated partial thromboplastin time).

Methodology: We carried out an analytical cross-sectional study from 01st November 2018 to 31st May 2019, in the gynecology and obstetrics department of the Laquintinie Hospital in Douala. We recruited 150 pregnant women including 50 preeclampsia matched to 100 non-preeclampsia all with a gestational age greater than 20 weeks of amenorrhea. The variables of interest were age, pregnancy, parity, gestational age, marital status and body mass index, Prothrombin Level (PL), and Activated Cephalin Time (ACT). Statistical tests were considered significant for a p-value <0.05.

Results: The majority age group in both groups was that of 25-30 years with a mean age of 27.80 ± 5.80 in the pregnant preeclampsia; the latter was predominantly pauci-gravid, nulliparous, and grade 1 obese with a gestational age predominantly ≥ 37 weeks of amenorrhea.

Conclusion: Our preliminary study reveals the non-existence of socio-clinical factors exposing to coagulation disorders in preeclampsia in our setting.

Pre-eclampsia is defined as the Occurrence of Hypertension (HTN) associated with proteinuria after 20 weeks of amenorrhea in a previously normal pregnant woman [1] and occurs in 2% to 7% of pregnancies [2]. According to the WHO, it is one of the major causes of maternal and neonatal morbidity and mortality in the world (14%) and especially in developing countries [3]. It is the third leading cause of maternal mortality, after postpartum hemorrhage and infections in Cameroon [4]. Although the exact cause of preeclampsia is not fully understood, it can be attributed to certain factors, including changes in placental perfusion, endothelial dysfunction, fibrin deposition, inflammation, and hypercoagulability [5,6]. Hypercoagulability is an imbalance between coagulation and fibrinolysis activities leading to the development of multiple thrombi and the rapid consumption of platelets, prothrombin, fibrinogen, and other coagulation factors [7,8] and is thought to be responsible for around 15% of maternal deaths due to preeclampsia [9].

An abnormal enhancement of coagulation activity is involved in the pathogenesis of preeclampsia, as suggested by the increased frequency of venous thromboembolic events, thrombotic placental abnormalities, and thrombin generation in this population [10,11]. This state of hypercoagulability is described in the literature as being more severe in preeclampsia compared to normal pregnancies [12- 14]. In France in 2013, a study found the level of prothrombin higher in pre-eclampsia during pregnancy, childbirth, and postpartum [12]. In China, Han et al. in 2014 found that during the third trimester, pregnant women with preeclampsia presented a state of higher hypercoagulability with the prolongation of the Activated Partial Thromboplastin Time (APTT) and Thrombin Time (TT), the increase in D-dimer and mean platelet volume [13]. In Sudan, Husham et al. in 2016 found that women with severe preeclampsia had significantly higher levels of Thrombin-Activatable Fibrinolysis Inhibitor (TAFI), Plasminogen Activator Inhibitor (PAI) 1, and a significantly lower level of PAI-2 [14].

This was a cross-sectional analytical case-control study.

Period, duration and place of study

Our study took place from November 1st 2018 to May 31st 2019 (i.e., 7 months) in the obstetrics and gynecology department of Laquintinie Hospital in Douala.

It consisted of pre-eclampsia and non-preeclampsia pregnant women received during our study period.

Inclusion criteria: We included in our study pregnant women from our study population who gave their informed consent without distinction of age, pregnancy, or parity.

Gestational age greater than or equal to 20 weeks of amenorrhea.

Exclusion criteria: Were excluded from our study.

We carried out a convenient, consecutive, and not exhaustive sampling.

Administrative procedures: The study protocol had been approved by the Institutional Research Ethics Committee for Human Health of the University of Douala by issuing an ethical clearance N° 1727 CEI-Udo/ 02/2019/T. The collection was carried out with respect for confidentiality by means of anonymous files. We also obtained authorizations from the director of Laquintinie Hospital.

Collection of data: After obtaining informed consent following the explanations relating to the study, the data was collected using a structured data sheet whose variables of interest were:

Physical: a) Anthropometric and hemodynamic parameters

Height (in cm) was measured with a measuring rod, the patient with bare feet standing upright with his head horizontal.

Blood pressure (in mmHg): after 10 minutes of rest, it was measured in both arms. This measurement was made using electronic blood pressure monitors from OMRON (Kyoto, Japan). Anyone with BP ≥ 140/90 mm hg was considered hypertensive.

b) Urinary dipstick (for proteinuria testing): It was done using MISSION brand urine strips LOT no.: URS8060151 only in nonpreeclampsia patients. Proteinuria was said to be significant from two crosses.

The ACT consists of activating the intrinsic pathway of coagulation and explores the factors of the contact system (FXll and FXI, high molecular weight kininogen, prekallikrein), of the antihemophilic complex (FIX, FVll l), of the complex prothrombinase (FX, FV), prothrombin (FII) and fibrinogen (ex-FI).

The Prothrombin time (PT) consists of measuring the time elapsed until fibrin formation after addition to a citrated plasma of an excess of calcium thromboplastin containing tissue factor, phospholipids, and calcium. It is customary to express the prothrombin time as a percentage after calibration. The test is then incorrectly called prothrombin level (PL). Prothrombin time explores factors VII, X, V, II, and fibrinogen.

A) Place of sampling:Samples were taken in obstetrical emergencies, in antenatal care, or the pathological pregnancy department by venipuncture at the fold of the elbow.

B) Sample collection and analysis: For each patient, 5 ml of blood was taken in 01 citrated tube for the determination of QT, PL, INR, and ACT. And the analysis was carried out within 2 hours, after centrifugation at most 15 minutes after sampling, to obtain a plasma poor in platelets by a semi-automatic coagulometer of the BIO SOLEA 2 brand, serial number: 026020-00345 in the laboratory of the Laquintinie hospital.

Quantitative variables were grouped as a mean with standard deviation.

Qualitative variables in the form of numbers and percentages.

The comparison of the qualitative values was made with the Chisquare test and the quantitative variables with the Student t-test. The calculation of the odds ratios and their 95% confidence interval was only done when comparing the biological parameters of the two groups during univariate analysis. Multiple linear regression models were performed, in which PT and ACT levels were dependent variables, and age, parity, gestational age, BMI, and pre-eclampsia were the independent predictors of interest. The p-value was significant if it was less than 0.05. 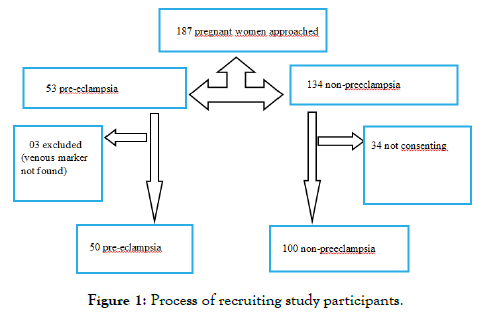 General characteristics of the study population

Table 2 : Obstetric history of our population.

Table 3: Gestational age and Body mass index in our population.

Table 4: Comparison of the biological parameters of our population

We did not find any socio-clinical factors exposing coagulation disorders in preeclampsia either in linear regression analysis or in univariate analysis (Tables 5 and 6).

We did not find any socio-clinical factors associated with coagulation disorders in preeclampsia in our study.

The international literature recognizes advanced age, primigravidity, nulliparity, obesity, and lack of exposure to sperm of the partner, as factors that may lead to the onset of preeclampsia.

These socio-clinical factors are variably found in our study as much as the work of other authors.

Parity: The mean parity of preeclampsia was 1.26 ± 1.30 and 1.37 ± 1.42 in non-preeclampsia patients with a non-significant statistical difference. These results are identical to those found by Awolola et al in 2016 in Nigeria [7]. Nulliparas were in the majority in the two groups as opposed to Han et al. in 2017 in China [13] who found only nulliparas. This difference can be explained by conjoint facts: on one hand the limitation of birth in China due to their overpopulation and our customs on the other.

We looked for the risk factors for coagulation disorder in preeclampsia especially maternal age, gestational age, and obesity which are risk factors identified as such by the international literature [18-20] and we did not find any. This result is identical to the study conducted by Christelle et al. in 2014 in France [10].

Thus, our results reported in Table V were not influenced by these identified risk factors.

At the end of our study, the preeclampsia pregnant woman in our environment was obese pauci-gravid, nulliparous with an average age of 27.80 ± 5.80, and her profile did not influence her coagulation disorders.

Limitation of the study

The sample size that was not calculated due to a lack of available data may therefore lack statistical power The hemostasis parameters used, although not negligible and accessible, seem to us insufficient to assess hemostasis The particularities of the population studied as well as the individual predisposition to coagulopathy can have a significant impact on the results obtained as well as on their interpretation; and these can explain the different rates between studies and justify their heterogeneity by location. This is the case with some of our findings concerning those of other authors. This, therefore, means that beyond the thesis-anti thesis approach, it is necessary to consider the racial component sometimes not in phase with certain so-called referential and predominantly Caucasian data. We recruited, consecutively but not exhaustively, 150 pregnant women, including 50 preeclampsia matched with 100 non-preeclampsia.

The authors declare on honor that they have no conflict of interest.

Contribution of the Authors

Copyright: © 2021 Essome H, et al. This is an open-access article distributed under the terms of the Creative Commons Attribution License, which permits unrestricted use, distribution, and reproduction in any medium, provided the original author and source are credited.