Evaluation and Demonstration of Cassava Varieties and its Product via Promotional Workshop under Irrigated Condition of Middle Awash, Afar, Ethiopia

Journal of Horticulture received 1606 citations as per Google Scholar report

Evaluation and Demonstration of Cassava Varieties and its Product via Promotional Workshop under Irrigated Condition of Middle Awash, Afar, Ethiopia

Cassava production is popular in Africa due to its low water requirement, which is recently adapted in Afar region that characterized by low availability of moisture. Demonstration was not done to familiarize the crop with agro pastorals in the area. Therefore, the experiment was carried out at WARC, Bedulale and Kedigadora kebeles in 2014 cropping season using two released cassava varieties namely Qulle and kelo planted on double observational plots that arranged as RCBD with two replications at each location. Practical training on product development and end product test were accomplished for selected agro pastorals of Amibara districts through promotional workshop. Storage root yield results of the experiment showed that there was highly significant difference (P<0.01) between the two cassava varieties as, Variety Kello gave significantly higher average storage root diameter (2.25 cm) and average root length (16.65 cm), average root number (43.36%), unmarketable root yield (24.67%), marketable root number (71.03%), total root number (43.09%) and total root yield (18.43%) than variety Qulle. Combined analysis of variance for each location also showed the same result. Varieties were non-significant at the specified level of significance for total root yield at Werer agricultural research center and Kadigadora but they were found to be significant at Wedulale. Similarly, the varieties were non-significant at the specified level of significance for average root diameter and number, unmarketable and total root number at WARC and Wedulale but, they were found to be significant at Kadigadora. Agro pastorals were provided and consumed eight different kinds of cassava based meals namely: 1) Cassava bread, 2) Cassava chechebsa, 3) Cassava cookies, 4) Cassava cheeps and biscuits, 5) Wet from Cassava leaves, 6) Cassava enjera 7) Boiled cassava root, 8) Cassava potage. After testing food, discussion with Agro pastorals about the crop, its production and food test was done. They became interested to grow cassava and happy with the demonstration and call it “Me’e” meaning best in Afar language. Thus it, cassava production and utilization are suggested to be increased all over the tested locations and areas with similar agro ecologies in the region.

Cassava (Manihot esculenta Crantz) is one of the most consumed root crops in the world and second important staple food for energy in sub-Saharan Africa providing up to 285 calories per person/day [1]. It’s grown in the area between the latitudes 30° N and 30° S [2]. Cassava tolerates hot climate, but a critical point exist between a daily average temperature of 18 and 20°C, below which the plants don’t grow normally and the yield decrease rapidly. It grows exclusively as food in 39 African countries, stretching through a wide belt from Madagascar in the south-east to Senegal in the Northwest [3]. It is a staple food for more than a tenth of the world’s populations, and in tropical countries it is the third source of calories after maize and rice [4]. Cassava supplies energy for over 500 million people in tropical Africa [5]. It is also used as a livestock feed substitute for grain [6]. Cassava possesses unique attributes, notably the ability to make returns of root yield even at extreme stress conditions [7].

Africa currently accounts for more than 50% of the world’s annual output of 184 million tonnes of cassava with Nigeria being the leading producer in the world, followed by Brazil, Thailand, Indonesia, Democratic Republic of Congo, Ghana, Tanzania, Mozambique, Madagascar and Uganda [8] in that order. Cassava ranks after yam in terms of production among the root and tuber crops of economic value [9], and fourth in the tropical world after cereal (rice, wheat and maize) [10]. The main value of this crop is in its storage roots where the dry matter contains more than 80% starch. The areal parts, mainly the leaves are also widely consumed as vegetables, supplying protein, vitamins and essential minerals [11,12]. As the root crop has gained industrial importance with uses in ethanol production, high quality cassava ï¬?our in bread production, and glucose syrup production.

It was not known when cassava was introduced to Ethiopia, but it is popular in Southern regions of the country since very long time. Currently, it is expanding all over Ethiopia due to its drought tolerant and higher yield as a result two cassava varieties were released namely Qulle and kelo both are late maturing (12-18 months). The crop was recently introduced to Afar region and two cassava varieties were adapted for their yield and yield components to drought and heat stress condition of Amibara districts. Following variety adaption agro-pastoral participatory cassava product development and promotion is needed. Therefore, this paper was aimed to poster activities carried out in the selected locations of the region and results obtained through demonstration of cassava based products.

Description of the study area

The experiment was conducted on horticulture experimental site of Werer research center and on agro-pastorals farm of Bedulale and Kedigadora kebeles in 2014 cropping season. The area is located in the Afar Regional State, Zone-3, Amibara district, which is 280 km in the north east of Addis Ababa. It is located at 9o 60’ N latitude and 40o 9’ E longitude with an altitude of 740 meter above sea level (m.a.s.l.). The mean annual temperature of the area was 34O C, while the mean annual rainfall and evapo-transpiration are 560 and 2600 mm, respectively. The area has very long hot and dry seasons with erratic rainfall.

The field experiment was laid out in randomized complete block design (RCBD) with two replications in three locations namely Werer research center and on agro-pastorals farm of Bedulale and Kedigadora kebeles in 2014 cropping season. Two released Cassava varieties Kelo (44/72 red) and Qulle (104/72 Nigeria red) were evaluated. Each cassava variety was planted on 100 m2 area in double observational plots as replications. One by one between-row spacing and with in-row spacing were used Weed control was done manually by hand and hoe specially during early establishment. Irrigation was applied by furrow irrigation. Yield and all necessary data were collected from the central eight rows. Samples of cassava storage roots were collected from all location and delivered to Ethiopian Health and nutrition research Institute for hydrogen cyanide test.

Performance of varieties for yield and quality parameters

The result of analysis of variance indicated that effects of variety averaged over replication and location were highly significantly differ for all parameters except average root yield, marketable root yield and unmarketable root number between tested varieties (Tables 1 and 2).

Table 1: Combined analysis of variance for yield and yield components of cassava variety under three locations. 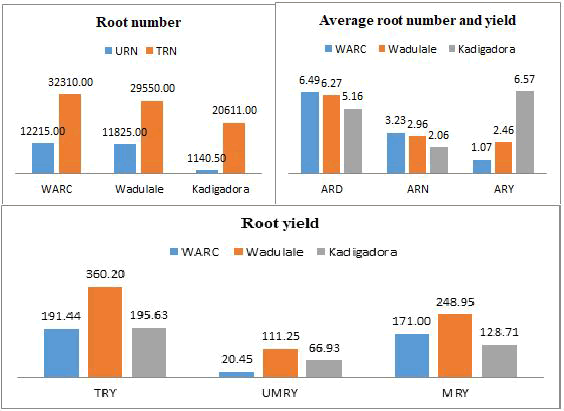 Variety Kello produced significantly more total root yield (270.11 q ha-1) than variety Qulle (228.07 q ha-1) which was a bit lower than the yield at western and southern parts of the country, 281 and 272 q ha-1, respectively. The HCN content of both varieties grown in all locations were highly lower than the value obtained at different parts of the country which indicates that that the crop can be used for food without any health frustrations in middle Awash under irrigated condition. This might be due to furrow irrigation applied during the production season of the crop. This result is in line with the result reported by that stated, irrigating with 60 mm and harvesting at 9 MAP produced the lowest cyanogen content and highest starch percentage in cassava roots and suggest that administering an ample supply of water, particularly during the dry season, should mitigate the cyanogenic potential of cassava roots. The cyanogenic glycosides content in the root was higher under the drought-stressed condition than under the well-irrigated condition as in a previous report.

Cassava is recently introduced to afar regional state through adaptation trials by Horticultural research case team of were agricultural research center. Cassava production theoretical and practical trainings were given in the hall and field (Figure 2) and cassava food preparation (Figure 3) and consumption (Figure 4) were demonstrated to agro pastorals of Amibara districts. Cassava based common dishes were prepared through mixing 70% of cassava flour with 30% wheat and Teff flour. The dishes were 1. Cassava bread, 2. Cassava “chechebsa”, 3. Cassava cookies, 4. Cassava cheeps and biscuits, 5. “Wet” from Cassava leaves, 6. Cassava “enjera” 7. Boiled cassava root and 8. Cassava potage (illustrated in picture 3). Flour prepared from both Cassava varieties separately was mixed with Teff for preparation of cassava “Injera” (Ethiopian flatbread with a slightly spongy texture) and the remaining were mixed with wheat flour for other food types (Figure 5). Cassava (Manihot esculenta Crantz) is one of the most consumed root crops in the world and second important staple food for energy in sub-Saharan Africa providing up to 285 calories per person/day. This valuable crop is drought tolerant and higher yielder in small plot of land which is the behavior that most crops do not show. The character is confirmed by the storage root produced by both varieties which yielded more than 20 t ha-1. The varieties were characterized by; lower content of the deadly chemical called HCN.