Allergic rhinitis is a common condition that causes a negative effect on patient well-being. Antihistamines and glucocorticoids, the first line treatments usually administered for rhinitis, are normally associated to side effects. In addition, they may show limited efficiency in controlling nasal obstruction, edema and hyperemia occurring secondary to persistent inflammation. Dobesilate, an inhibitor of fibroblast growth factor and vascular endothelial growth factor, shows a markedly anti-inflammatory activity in several inflammation-dependent diseases and inflammation models. Our study shows that nostril spray application of dobesilate for one week is effective in reducing symptoms and signs in patients with seasonal allergic rhinitis.

Rhinitis is a very common disease, derived of persistent nasal inflammation. It represents an annoying health condition in both children and adults. Common symptoms include nasal itching, rhinorrea and sneezing. Antihistamines and glucocorticoids are regularly at the base of first line treatments for rhinitis. However, antihistamines do not offer good clinical response in controlling the main signs and symptoms and patients normally require of additional drugs [1]. In addition, antihistamines and glucocorticoids often associate to many different side effects [2,3]. Consequently, novel treatments for rhinitis seem desirable. In this context, we evaluated the efficacy of direct application of dobesilate in solution, an inhibitor of fibroblast growth factor (FGF) and vascular endothelial growth factor (VEGF) activities, whose anti-inflammatory activities have also been shown in our laboratories recently [4-7]. Dobesilate has been in use for many years as vasculotropic, with a good safety profile [4,8,9]. We report that local administration of dobesilate improved symptoms and signs in seasonal allergic rhinitis patients.

Ten patients with seasonal allergic rhinitis of both sexes and age ranging between 30 to 65 years participated in this study. After approval of our institutional ethical committee, patients signed an informed consent form, which includes a comprehensive description of dobesilate and the proposed procedures. Patients were asked before and during treatment to rate their rhinitis symptoms. The Total Nasal Symptoms Score (TNSS) comprises the following symptoms of rhinitis: sneezing, rinorrhea and itching and rates each individual symptoms on a 4-points scale (0 none, 1: mild, 2: moderate and 3: severe). Mucosal allergic rhinitis signs such as hyperemia and edema were evaluated by rhinoscopy at baseline and after treatment. Clinical signs were graded using the following scale: 0: no signs of involvement, 1: moderate and 2-3: severe. Patients applied dobesilate spray (3 times a day) to each nostril for one week. Dobesilate was administered as a 12.5% solution of diethylamonium 2,5-dihydroxy benzenesulfonate (etamsylate, Dicynone®, Sanofi- Aventis, Paris, France). Mean clinical scores before and after one week of treatment with dobesilate were compared by paired t-test. A p<0.05 was considered significant.

Patients reported that all symptoms improved after the first day of treatment, both at daytime and night. After one week of treatment all symptoms and signs scores were significantly reduced (Figures 1 and 2). Patients did not show any apparent side-effects that may be attributed to the treatment. The magnitude and consistency of the response contrast with the rarity of spontaneous amelioration in untreated patients with allergic rhinitis. After two months follow-up, patients live free of signs and symptoms. 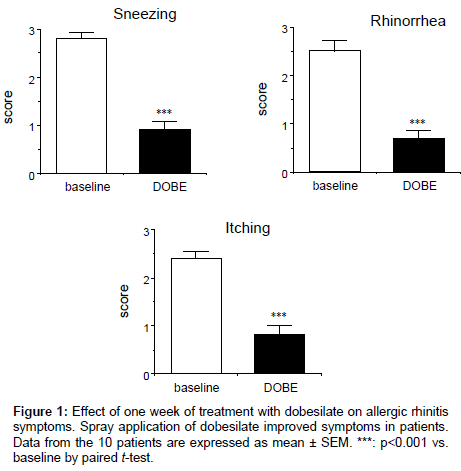 Figure 1: Effect of one week of treatment with dobesilate on allergic rhinitis symptoms. Spray application of dobesilate improved symptoms in patients. Data from the 10 patients are expressed as mean ± SEM. ***: p<0.001 vs. baseline by paired t-test. 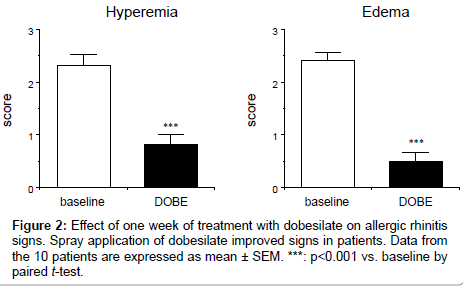 Figure 2: Effect of one week of treatment with dobesilate on allergic rhinitis signs. Spray application of dobesilate improved signs in patients. Data from the 10 patients are expressed as mean ± SEM. ***: p<0.001 vs. baseline by paired t-test.

The results obtained with dobesilate positively contrast with the outcomes of the treatments with antihistamines and nasal spray corticoids, the main treatment options for moderate/severe allergic rhinitis [10,11]. Antihistamines do not offer good clinical responses in controlling signs and symptoms secondary to persistent inflammation, as nasal obstruction, oedema and hyperemia. Accordingly, patients often need, in this last case, of some additional drugs, which, by themselves, do not contribute to a shortening of the time required for healing [12]. Furthermore, the use of antihistamines and nasal spray corticoids can be associated to adverse effects. Problems commonly associated with the use of antihistamines included sedation impact and heart rate changes [13]. Intranasal steroids are the most effective therapy for seasonal allergic rhinitis, yet their overall efficacy is moderate [14]. Furthermore besides side effects of intranasal steroids, such as nasal irritation and epistaxis, the use of these drugs is controversial in some patients, such as pregnant or breastfeeding women [15].

VEGF is present in nasal secretion in rhinitis, and is overproduced immediately after antigen provocation [12,16]. Meanwhile VEGF may augment eosinophilic inflammation in the nasal mucosa [17,18]. VEGF causes vasodilatation and increases vascular permeability by stimulating the endothelial production of vasoactive mediators such as nitric oxide and prostacyclin, which allow plasma proteins to leak into the extracellular space, leading to edema and to a profound alteration of the extracellular matrix. It has been reported that the increase of vascular permeability in nasal mucosa by VEGF is six orders of magnitude higher than histamine on molar units [19]. We have recently reported that dobesilate inhibits VEGFinduced hyperpermeability [20]. In addition, dobesilate shows other biological activities relevant for treating rhinitis. Thus, it is also a powerful inhibitor of fibroblast growth factor (FGF), a strict mediator of VEGF activities [21-23]. Furthermore, dobesilate shows a markedly anti-inflammatory activity in several inflammationdependent diseases and inflammation models [5-7]. It seems obvious that all these inhibitory activities may contribute to the relief of rhinitis symptoms by dobesilate.

In this report we present a preliminary assessment of the efficacy of the local administration of dobesilate as a spray, in patients with seasonal allergic rhinitis. We show that nasal applications of dobesilate relieve the signs and symptoms in patients as early as one week after treatment. No relevant safety issues were apparent along the study, in agreement with the good safety profile of this compound. Largescale therapeutic trials are obviously needed for more definitively establishing the efficacy of the treatment. The results presented in this report seem a solid support for undertaking these trials.

Authors are indebted to all the patients who participated in this study.

Copyright: © 2015 Cuevas P, et al. This is an open-access article distributed under the terms of the Creative Commons Attribution License, which permits unrestricted use, distribution, and reproduction in any medium, provided the original author and source are credited.
Top