Background: Premenstrual syndrome is the medical condition which is the combination of physical, psychological and behavioral changes in the late secretory phase of the regular menstrual cycle and interferes with relationships or activities of an individual which occurs just before the menses.

Aim and Objectives: To determine the effectiveness of 8 weeks’ aerobic exercise non-athlete girls showing PMS symptoms. To investigate the coping strategies of PMS

Procedure: Apparatus and techniques which we used for the detection and revelation of PMS symptoms were a premenstrual symptoms screening tool for adolescent PSST while the symptoms of pain were accessed and identified using a visual analog scale. Various females were considered and requested to practice aerobic exercises such as walking, jumping, jogging, hamstring quadriceps stretching for 8 weeks.

Result: Outcome of the commencement of aerobic exercise was positive as it was clearly visualize-able and relatable that the discrimination in the symptoms of PMS in pre-exercise and post-exercise faces were significantly distinct. Aerobic exercise diminished the effect of psychological and physical symptoms, hence can be used as a treatment to cure and minimize PMS symptoms.

Conclusion: The finalized verdict of overall research and practical implementation of tests and procedures lead us to conclude although PMS symptoms are frequently detected in the majority of the female, yet aerobic exercises such as walking, jogging, running, stretching of quadriceps and hamstrings proved as a fruitful.

The physical and emotional symptoms which occur a week or two before, prior to menstruation, while perish right before or at the start of bleeding are termed as Premenstrual Syndrome. These symptoms include physical symptoms such as acne, bloating, tender breasts, irritability, feeling tired, and edema (physical symptoms). However, some psychological symptoms can also be experienced which includes depression, anxiety, stress, and anger. The tenure of the existence of these symptoms usually ranges from 6 to 8 days however their pattern of occurrence and intensity of the reaction may fluctuate depending upon some considerable factors, most prominently “ aging process ” . The existence of these symptoms is identifiable throughout the whole life of a female excluding the phase of pregnancy and postmenopause. Diagnosis of PMS entails a regular pattern of emotional and physical signs and symptoms occurring before the menses and after the ovulation to a point that hinders with normal life [1-10]. The presence of emotional symptoms can be hazardous in the initial phase of the cycle as it may lead the person to some psychiatric issues. The initialization of the PMS is still mysterious however, high-salt diet, caffeine, alcohol and increased stress seems to make the intensity of these symptoms worse. The fluctuations in hormone levels are believed to be the initiator and pre- predecessor as a cause of these symptoms. Decreasing use of salt, diet changes, reducing caffeine, stress, and alcohol along with calcium and vitamin D supplements may be helpful in the reduction of PMS. Anti-inflammatory drugs (NSAIDs) or painkillers such as Panadol would also be taken as a restoration doze to cure physical symptoms. Such females who experience severe symptoms or whom cycle of menstrual are irregular, usually prescribed by the doctors to take birth control pills to regulate the menstrual cycle and cure such vulnerable symptoms. However, in rare cases, women also need to suffer through surgery (ovaries removal) when there are severe conditions which are incurable by mere medication [11-22].

Due to the adverse and hazardous effect of drug therapy and salpingo-oophorectomy (ovary removal), doctors formerly suggest participating in physical activities and exercises to eradicate the symptoms of PMS.

How exercises reduce symptoms of PMS is still unknown, but it is studied that exercises balance the hormone imbalances which occurs in women body during reproductive cycle hence help in treating PMS, the effect of 3 months’ exercises and found that physical activity literally has the tendency to treat both physical and psychological symptoms of PMS. Physical activity not only cures PMS but also affects and maintains its connection with other concerned organs thus hinders the disabilities and diseases.

• To investigate coping strategies of PMS

PSST-A (screening tool for adolescents) developed by researches of Macmaster university, it is a questionnaire of 19 questions to check the severity and impact of PMS.

The data was collected from GCUF hostels

Inclusion criteria: Girls of age 18-25 whose marital status is single experience the regular menstrual period (bleeding for 3-8 days every 28-35 days) and are Non-athlete.

Exclusion criteria: Girls who had done physical activity for 3 months or more, Having a history of asthma, diabetes or renal failure, On the special diet, Having bleeding disorders, Any medical condition, Having any psychological problem, Having a family history of any reproductive disease.

Data were analyzed using SPSS version 16.0. the paired t-test was applied to verify the effect of aerobics exercises on PMS.

Hence after conducting exercises for 8 weeks, it was clearly seen that exercises helped to reduced symptoms like anger, anxiety, stress, etc.

In our study paired t-test was used and the value of p was 0.00 that means that our data is highly significant Tables 1 and 2.

Table 2: Shows the mean and mode values of pre and post-test and hence clears that exercises were helpful in treating PMS.

Physical activity reduces the stress level in our body hence many participants who were complaining of anxiety, depression or other psychological symptoms resulted to be satisfied with this advantageous and beneficial program.

The reason for their satisfaction is whenever a participant or an individual indulges itself in such a physical activity, the brain starts to produce beta-endorphins which reduce depression and other psychological symptoms in females.

The relation of physical activity and exercise to mental health and found that exercises are beneficial in treating psychological symptoms like stress, anxiety, depression, and other symptoms many women reported more self-confidence and increased social activities with the remarkable improvement in their social skills as exercises increase the neurotransmitters endorphins which are the body natural paracetamols.

It also reduces the level of adrenal cortisol and helps an individual to focus and concentrate on its to-do upcoming while mending the mood swings. The effects of exercises are similar like meditation or massages as it alleviates our mental health and helps us to focus concisely.

It also alleviates pessimistic thoughts and causes the person to be confidently optimistic by reducing the intensity of depression which is also reflected in our experiment’s results as the preexercise depression level was 2.00 which reduced to 1.00 after doing aerobics exercises.

Anxiety is one of the most common causes seen in girls suffering from PMS. But we can clearly see in our results that mean value of anxiety reduced from 2 to 1 hence exercises were beneficial in treating anxiety in the participants. 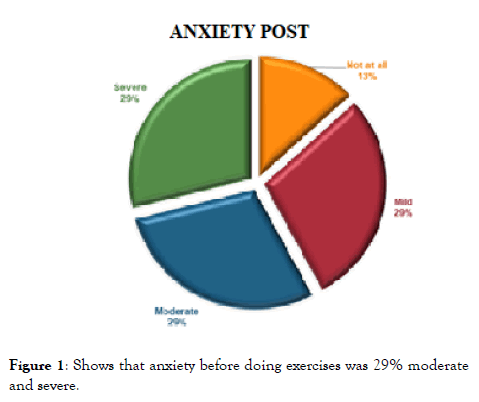 Figure 1. Shows that anxiety before doing exercises was 29% moderate and severe. 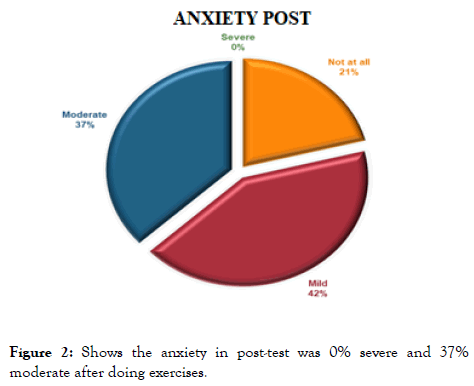 Figure 2. Shows the anxiety in post-test was 0% severe and 37% moderate after doing exercises.

How physical activity (exercises) relieve psychological symptoms is still not clear but researches show that it is mainly due to balanced levels of adrenal cortisol and beta-endorphins in our brain.

Exercises improve the imbalance of these hormones and hence help in alleviating psychological symptoms like stress, anxiety, depression.

The PMS diagnosis and intervention and studied that woman complain of fatigue, breast tenderness, headache, and many other physical symptoms because of an increased level of aldosterone, prolactin, prostaglandin and reduced levels of Mg and vitamin B causes the decreased bone mineral density in women with PMS and aerobics exercises balances these hormones and decrease symptoms.

High levels of aldosterone in serum cause reabsorption of water and sodium in the body and due to sodium and water deficiency swellings and other physical symptoms. The PMS in detail and reported that physical symptoms including edema, swelling is due high level of angiotensin and renin and reduced amount of estrogen and progesterone.

Aerobics exercises also influence abdominal cramps, fatigue and bone mineral density by an increase in blood circulation, physical activity, and bone health and found that exercises improve bone health and reduce the chances of osteoporosis in the female.

Several hurdles which we encountered throughout the whole stream in which the most consequential factor was the limited time span while other constraints such as lag of available funds and exercise arena/room are also noteworthy. The limited timeframe of 2 months restricted the efficiency of our results as more experimentation could be done which would consequently lead us to the more precise outcomes. There was the limited number of participants due to our unfamiliarity with the audience and social critics; therefore, the best availability was of either students or jobholders who would hardly get us the time of their pre-scheduled busy routines. Female students who participated and engaged with us could accommodate us with not more than 30 minutes each of their incommodious spare time. Most of the female participants were not comfortable to discuss their confidentiality and personal details. Moreover, a notable number of young girls, who were formerly considered to put themselves in this activity, left us barehanded latterly as their parents forbade them to participate while mentioning the reason that this exercise would indulge them into some tough scenarios thus approval of joining us was not granted to those girls.

The finalized verdict of overall research and practical implementation of tests and procedures lead us to conclude although PMS symptoms are frequently detected in the majority of the female, yet aerobic exercises such as walking, jogging, running, stretching of quadriceps and hamstrings proved as a fruitful and positive approach in reducing the signs and symptoms of premenstrual syndrome.

The limited access to the participants also created the gap of age slaps in performing experimentations. Apart from prementioned supreme hurdle “time constraint”, participants of specific age range were also the tough call to generate effective results. While being in GCUF hostel, the participants of age no less than 18 and no more than 25 were the only availability so 18-25 years of age was our stipulated criteria. Therefore, more appreciable coherence could result if we might have had access to different age ranges which are:

• Effect of aerobics exercises on girls of 14-25years on PMS

Due to the narrow timeframe of not more than 3 months, we were compelled to wind-up and sum-up our research with the final verdict on the effect of aerobic exercise on non-athlete girls just in 8 weeks. Following mentioned enhancements and research analysis could be done refraining pre-mentioned limitation i.e. “time”:

• Effect of aerobics exercises for 3 months on PMS

• Effect of aerobics exercises for 6 months on PMS

Our performed analysis and experimentation only included aerobics exercises. However, more researches and practices could be done on several alternative exercises including:

• Effects of swimming on PMS

• Effects of yoga on PMS

• Effects of weight lifting on PMS

• Effects of an-aerobics on PMS etc.

Limited and narrow timeframe forced us to sum-up early while hindering us to contribute further potential in the generation of much pretty concise outcomes. All the experimentations and studies were done merely in 3 months hence the effect of aerobics exercises could only be examined. Further researches including theoretical or practical implementations could be taken into account on the comparison of aerobics and anaerobics on PMS.

Our foremost goal was to diagnose the effects of aerobics exercises on PMS. However, further analysis and researches to find multiple symptoms could be done which includes

• Effects of exercises on PMS and PMDD

• Effects of aerobics exercises on dysmenorrhea

Due to inadequate availability of participated audience and voluntaries, and due to our restricted access of approaching the females in the surroundings of GCUF area, the research could hardly be done on the GCUF hostel girls however more people could be taken into our examination if pre-mentioned constraints would be resolved accordingly. Following are our suppositions and assumptions of targeted females:

• Study of aerobics exercises on PMS in girls living in Faisalabad

• Study of aerobics exercises on PMS in girls living in Punjab

• Study of exercises on PMS in girls living in Pakistan