Effect of Protective Clothing and Fatigue on Functional Balance of Firefighters

Effect of Protective Clothing and Fatigue on Functional Balance of Firefighters

Sixty-one male firefighters (ages 18-47) were recruited from the Illinois Fire Service Institute (IFSI) training events and local fire companies. All participants reported no neurological or postural disorders. Informed consent was given by all participants and the study was approved by the Institutional Review Board at the University of Illinois. Participants were divided into two groups: 1) control group with Standard PPE (n=31), and 2) intervention group with Enhanced PPE (n=30). Data from four participants were excluded for the data analysis due to incomplete data collection. The final sample included 57 participants (control, n=28; intervention, n=29). Participants’ age, height, weight, body mass index (BMI), and months of firefighting experience were collected (Table 1). There were no significant differences between the two groups for any of these values.

The control group wore a Standard PPE ensemble typically used by firefighters in the United States. This PPE included 1) a traditional style helmet, 2) insulated hood, 3) bunker gear with relatively heavy insulation and low breathability, and 4) rubber boots (Figure 1a). On average, the full set of Standard PPE weighed 11.1 kg. The intervention group wore an Enhanced PPE ensemble designed with an industrial partner of IFSI that included: 1) a lighter, low profile helmet, 2) more breathable Nomax hood, 3) bunker gear with reduced insulation, improved breathability, and a passive cooling system to assist with heat transfer in the coat; and 4) lightweight leather/Kevlar boots (Figure 1b). The novel passive cooling system was intended to circulate exhaled air from the firefighter’s face piece to the coat’s inner lining. The idea behind this design was to create air movement inside the gear to assist with heat dissipation and thereby provide a means for evaporative cooling within the fully encapsulating PPE. On average, the full set of Enhanced PPE weighed 9.5 kg. Both PPE ensembles meet current NFPA 1971 standards for thermal protection and breathability. Both groups wore identical SCBA packs (50i SCBA, Scott) with a 4500 psi 30-minute carbon fiber bottle (DOT # E10951- 4500, Luxfer). The SCBA packs with a carbon fiber bottle weighed additional 9.5 kg. In this study, a novel FBT was developed to assess the functional balance of firefighters. This test was designed to simulate movements typically performed by firefighters on the fireground including stepping up and down from a platform, walking along a narrow walkway, and ducking under an overhead obstacle. This new test was developed due to significant limitations with existing balance tests, particularly when studying firefighters who had just completed a strenuous bout of firefighting activities. In pilot testing, traditional balance assessments that use a force platform to measure the control of center pressure were found not to be feasible because the firefighters were unable to complete the necessary repeated trials of quiet standing in their PPE due to the accumulation of heat stress. Several firefighters reported feeling faint while attempting these protocols. Additionally, the FBT developed by Punakallio et al. [4,15] was judged to be too challenging and dangerous for firefighters after an 18-minute strenuous activity due to the required backward walking on a narrow plank. While these assessments are well characterized for rested subjects, they were not feasible in this study design. As a result, we developed a more tractable and applicable functional balance test similar to that proposed by Punakallio et al. [4,15], but that could be safely utilized after strenuous firefighting activity. The FBT involved walking from one raised platform (15 cm (H)), stepping down and walking along a narrow plank (3 m (L), 15 cm (W), 4 cm (H)), stepping up and turning around within a small defined space (61×61 cm2) on a second raised platform (10 cm (H)), and walking back to stop within a defined space (61×61 cm2) on the original platform. The task was made more challenging during some trials by placing an overhead obstacle (a lightweight rod) across the center of the pathway at 75% of the participant’s height (Figure 2). The rod was supported by vertical supports placed approximately 114 cm apart. The inclusion of the obstacle was to mimic the need to pass through a low confined enclosure without hitting the structure. For safety, the rod was designed to fall away if the rod or supports were hit, rather than being a rigid structure. For each testing period, participants performed eight trials: two trials with no obstacle, four with the obstacle, and finally two with no obstacle trials. Participants were instructed to perform the task as quickly and safely as possible without committing errors. Each trial was timed by two investigators. T?he number of errors that each participant made was recorded. A minor error was counted when: 1) a foot or hand contacted the ground, 2) a hand contacted a platform, 3) the turn was not completed within the defined space in the platform, 4) the participant could not stop within the defined space, and 5) the obstacle was touched but did not fall. A major error was counted when the obstacle was contacted and the rod fell. This event was considered to be a major error because had the firefighter hit a rigid obstacle then the impact could have caused a potentially dangerous and destabilizing effect to balance. Participants were instructed that their score would be penalized if they committed an error. If an error was committed, the investigator informed the participant of the error and reminded him to try to not do the error during the subsequent trials. The number of major errors, minor errors, and performance time were recorded. A performance index was created from the weighted sum of major and minor errors and performance time. Greater weight was put on major errors than minor error since a major error was considered a critical and life-threatening error on the fireground. In this study, the performance index was defined as by the following equation. Performance Index 2 Major Error 1 Minor Error 1 Performance Time A three-way repeated measures multivariate analysis of variance (MANOVA) was performed to examine the effects of PPE ensemble (Standard vs. Enhanced), existence of obstacle, and firefighting activity (BL, PRE, and POST) on the number of major errors, number of minor errors, performance time, and performance index. The withingroup factors were existence of obstacle and firefighting activity. The between- group factor was type of PPE. Subsequent univariate repeated measures ANOVAs were used to examine significant effects. Post hoc tests used the LSD approach (Fisher’s least significant difference). The level of significance was set to α=0.05. Statistical analyses were run on SPSS (SPSS Inc., Chicago, IL; v17). 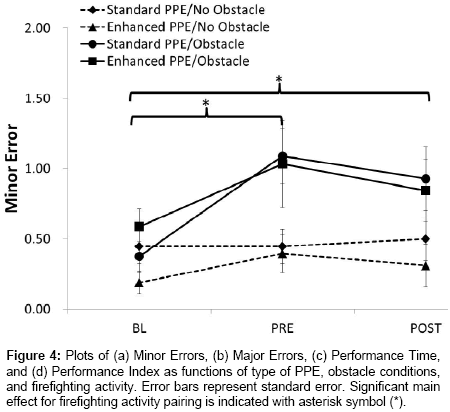 This research was funded by a grant from US Department of Homeland Security (#EMW-2006-FP-02459). Authors thank all test participants, research team, and especially over 20 graduate and undergraduate students for their assistance in data collection and coding.

Copyright: © 2013 Hur P, et al. This is an open-access article distributed under the terms of the Creative Commons Attribution License, which permits unrestricted use, distribution, and reproduction in any medium, provided the original author and source are credited.
Top