Earth, from the crust to the centre of the core, is divided into a number of layers on the basis of mineral composition, heat flow, and seismic discontinuities. Tectonically the lithosphere and asthenosphere are very important because these two layers are responsible for stressesto build up in the Earth’s crust and release in the form of the earthquakes. The lithosphere of earth is broken into different parts; each of them is called a tectonic plate. These plates are floating over dense asthenosphere in a complex pattern with a velocity of 2-3 cm/year resulting tectonic earthquakes. About 80 percent of natural earthquakes are tectonic earthquakes which provide evidence for the release of strain energy. Figure 1 is showing global seismic activity for shallow earthquakes from 1976 to 2005.This figure indicates the distribution of focal mechanism solutions (FMS) along different plate margins, which in term gives the distribution of stresses along plate margins. The distribution of FMS provides information about the relative magnitudes of the principal stresses [1]. 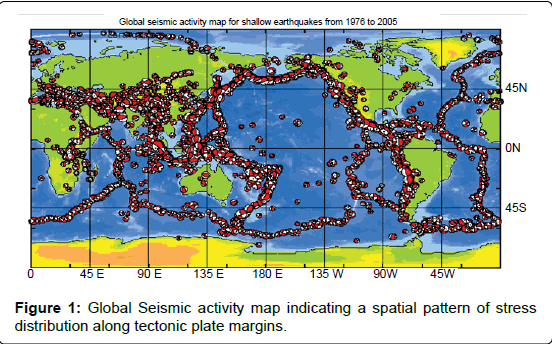 Tectonic features like faulting, folding, fracturing and volcanoes are results of stress fields. A stress field along a plate margin is one of the basic toolsfor forecasting the magnitude of future earthquakes. A most recent seismic activity in Tohoku, Japan (Magnitude 9.0 in 2011, According to USGS the 4th largest earthquake since 1900) was the result of long term stress built up along the pacific plate.The pacific plate is an oceanic plate subducting beneath the Eurasian Plate, forming a destructive plate margin. The friction between these two plates causes the stresses to build and release [2]. It is important to know how much portion of stress energy is released by an earthquake Figure 2. In the beginning of the 20th century, the earthquake sources werecharacterized on the basis of Richter Magnitude [3]. After the advancement in earthquake studies, parameters like seismic moments and stress drops are also introduced. 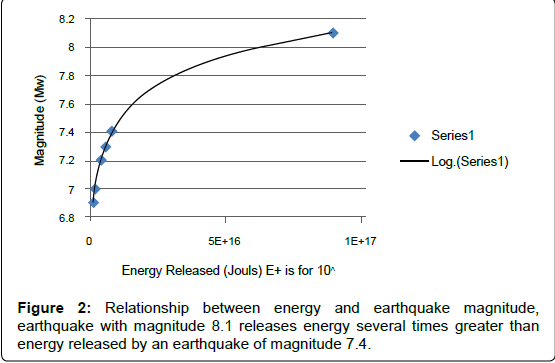 Figure 2: Relationship between energy and earthquake magnitude, earthquake with magnitude 8.1 releases energy several times greater than energy released by an earthquake of magnitude 7.4.

Tectonic earthquakes are related to active faulting in an area; therefore, parameters characterizing the source of an earthquake includes the rupture length “L” along a fault plane, the cross sectional area “A” of the fault , the mean slip on the fault “Smean”, the maximum surface displacement Dmax and the material property “µ”of the medium. These parameters are used to measure the stress drop “Δσ” after an earthquake by the following empirical scheme:

Δσ is stress drop, SMean is mean slip, L is length of fault and µ is material property of medium while C is the shape factor and nearly equal to 1 for all fault classes [7].

The rupture length “L” can be obtained by using a scaling relationship [5].

“Mo” is seismic moment can be determined by the following relation: Mo= µ A Smean

Where Mw is Guttenberg and Richter unified magnitude. The relationship between seismic moment M0 and stress drop is given below:

Example 1: By using the equation (3) and a catalog from The Geological Survey of Canada (available at http://www. earthquakescanada.nrcan.gc.ca/histor/top10-eng.php), energy released by the 8 largest earthquakes of Canadian is determined and given in Table 1.

Table 1: Energy released by the 8 largest earthquakes of Canada.

Equation 2 describes the rupture length in terms of the magnitude of an earthquake and stress drop. In case of very large earthquakes (Δσ, stress accumulated before Earthquake - stress released after Earthquake will be small) the mean slip (Smean) became linearly proportional to fault lengths, because in this case, the rapture affects the entire seismic zone and produces events of different lengths. There are two models to determine stress drop and mean slip, one is the W model which determines these parameters in terms of rupture width and the second is L model which defines stress drop and slip in terms of rupture length. The slip along a fault can be obtained by equation 5 [8].

Where A is cross sectional area of the rupture which is related to rupture length and width by the following equation:

Where W is the rupturing width, and L is the rupture length. These perimeters, together with moment magnitude, are used to determine slip and stress drop after an earthquake. Empirical relations discussed in the above section are used to determine reoccurrence time of an earthquake and maximum magnitude potential along an active fault, discussed in following section.

Seismic sources are divided into two types, fault specific and areal sources. Earthquakes occur along the active faults, a fault which has shown activity in last 1.8 Million years is called an active fault [9]. After the careful observation of fault parameters and related earthquake source parameters, a general relation for earthquake magnitude and rupture length can be written in the following form [5].

Equation 7 is used to determine the relationship for maximum earthquake potential in the following way:

Earthquake events along different faults across the world are selected for current analysis given in Tables 2-4. Parameters in the earthquake data set includeearthquake source parameters (magnitude, date, location and seismic moment) and fault parameters (rupture length (L) Width (W) and slip. These parameters are applied in the mathematical relationships which are discussed in the above section to calculate energy radiated by earthquakes, stress drop and repeat time.

The seismic moment for given fault parameters can be determined by the following theoretical relation:

Where µ is shear modulus, A is cross sectional area and D is average slip along the fault [6].

Example 1: Seismic moment: The crustal earthquake of 1959 in Hebgan Lake, USA with a magnitude of 7.6 and an average slip of 2.14 meters and rupture area 765 Km.

Now in the following section where the data was obtained by Wells and Coppersmith publication: the reoccurrence or repeat time of earthquakes is determined. Before determining reoccurrence time, the stress drop is calculated by the following mathematical relationship [5].

Equation 1 is given as:

C=fault geometry and is approximately equal to 1 for all fault types. All other parameters are given in Table 3.

Stress drop for an earthquake with a strike slip source is determined by using the data set from Table 4 and the results are given below Table 5. 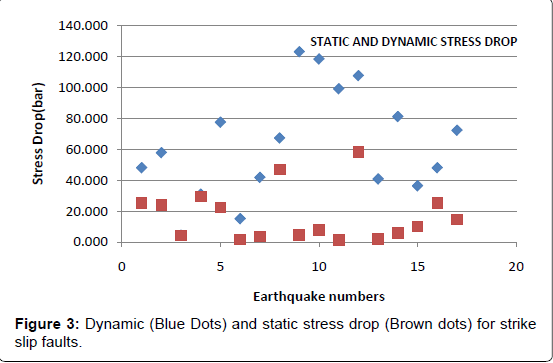 The behavior of stress drop along the rupture width for a strike slip source is shown in Figure 4. From this figure, it can be observed that for smaller widths, the difference between dynamic and static stress drop is small (Figure 5). For large values of rupture width, the difference between dynamic and static stress drop decreases. Figure 4 also indicates that for shorter width (depth), which is brittle Earth, the stress drop by a small magnitude earthquake is higher, but as width (depth) increases, stress drop will also decrease, even for large magnitude earthquakes. 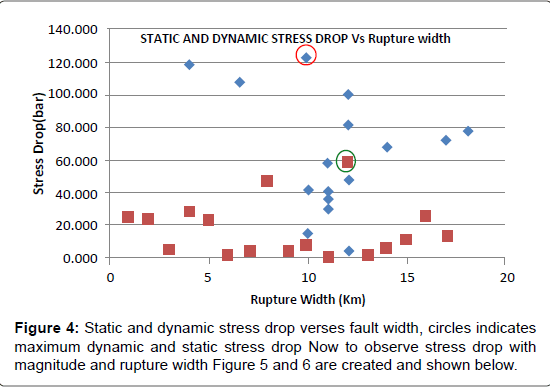 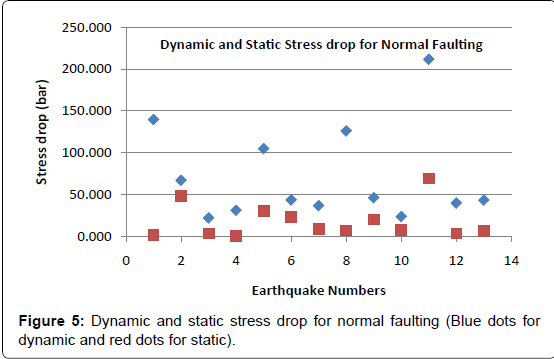 In order to observe the behavior of stress drop with rupture parameters for reverse and normal sources (Figure 6), similar models are generated by using the data set from Tables 6 and 7. 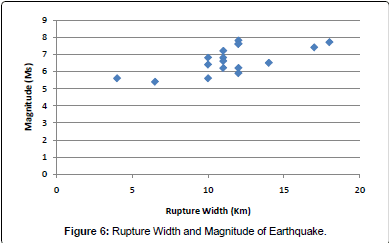 Results for reverse slip: It is observed that for reverse faults, the difference between static and dynamic stress is low, as compared to strike slip faults. In order to observe the behavior of stress drop for brittle (~up to 10Km) (Figure 7), and ductile (greater then 10Km) boundary, (Figures 8, 9) is created. This figure marks a boundary between brittle and ductile Earth at approximately 10Km where stress drop is highest (138 bar). 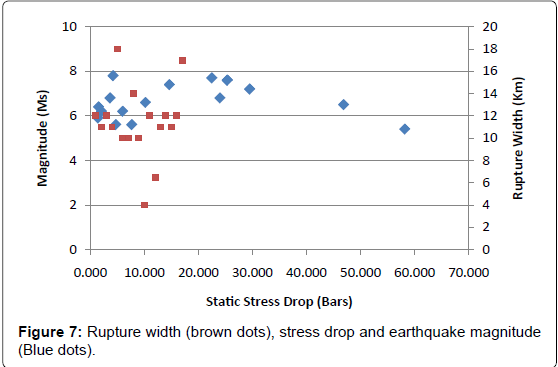 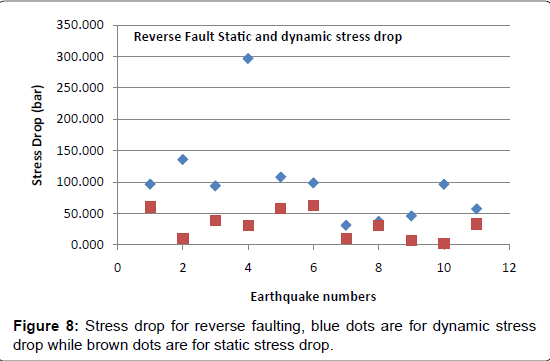 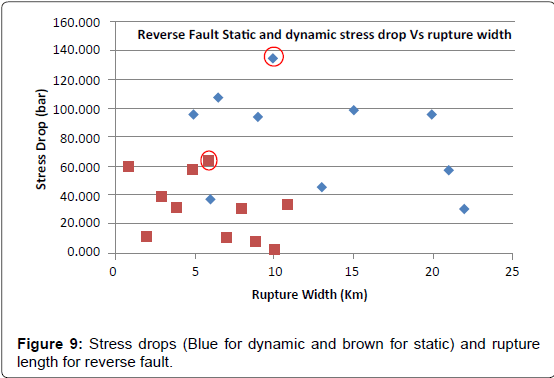 Figure 9: Stress drops (Blue for dynamic and brown for static) and rupture length for reverse fault.

Results for normal slip: From this section, it is concluded that earthquakes with reverse nature marks a well defined boundary between brittle and ductile zones. Energy released by earthquake or stress drop play an important role to determine reoccurrence time of earthquakes, discussed in following section.

Repeat time of earthquakes along an active fault depends upon following parameters.

The data set for calculation of repeat timeincludes the seismic moment M or corresponding moment magnitude Mw, rupture length, width and magnitude (Ms). For this part of the project, data set for normal faults are selected for repeat time analysis. The following sources are used for data set preparation:

Moment magnitude can be calculated by the following equation

Where Mo is the seismic moment discussed in the section above. The moment magnitude for a normal fault is measured by equation (11). It is then compared with the rupture length and repeat time. The results are shown in following section:

Where T is the repeat time in year, Smean is the mean slip along the fault and V is the slip rate which can vary for different tectonic zones.

Example 6: Reoccurrence time for an earthquake of magnitude 7.8 and mean slip of 3.3 meters along San Francisco fault can be determined in the following way:

An average slip rate along this fault is

Different faults have different slip rates, which depends upon their relative tectonic zone. For this part of project, slip rates for Normal faults (Table 7) are obtained from different sources and are shown in Table 8.

Now, by using data from Table 8 and the procedure from example 4, recurrence times are calculated for a normal slip and shown in Table 9. In the same way, repeat time can be determined for reverse and strike slip components can be calculated. From the table, it is observed that the slip rate plays an important role for the reoccurrence of larger earthquakes. In order to observe the relationship between rupture lengths, width and reoccurrence time of an earthquake, data can be shown in following way. 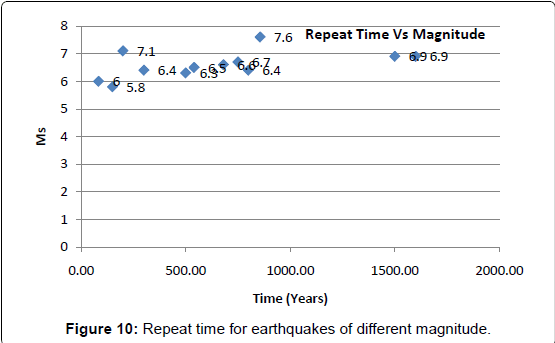 From the first part of project, it is observed that the average stress drop along the reverse slip is higher as compared to normal and strike slip faults. Stress drop will increase with the rupture of width for a particular point, which is interpreted as the energy release along the brittle part of the Earth. Beyond that, the depth ductile nature appears and stress drop decreases with the increase of rupture width (Figure 11). Large earthquakes represent a large amount of release of strain energy and hence, larger stress drop. With the passage of time, energy starts to accumulate along active faults and releases in the form of strain energy after a particular period of time. This repeat time of energy release is not constant for a specific magnitude, but it also depends upon the slip rate along active faults. Table 10 and Figure 12 are the final results of this project. 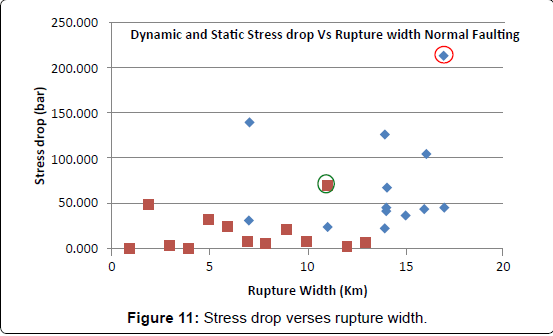 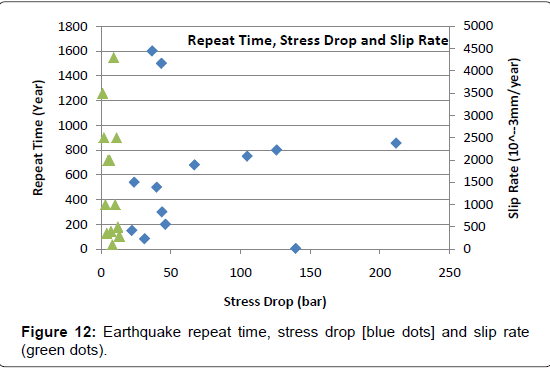 Copyright: © 2013 Ali W, et al. This is an open-access article distributed under the terms of the Creative Commons Attribution License, which permits unrestricted use, distribution, and reproduction in any medium, provided the original author and source are credited.
Top