Large fan shaped debris-flow deposits occur at the piedmont west of Benzilan, in the upper stream of the Jinsha River, southwest China. The accumulation is composed of alternation of debris-flow units and reddish gravel soil units, seemly showing a binary structure. The debris-flow deposit has a mean thickness of 100 m. We did analysis on particle size, major element, clay mineral, pollen and electronic spin resonance (ESR) dating for samples from the debris-flow accumulation. Our study shows that the reddish gravel soil was in fact the debris flow material and its apparent differences from the debris flow material, especially color, was due to weathering. It was a relative dryhot climate to weather the upper part of the debris flow body into the reddish gravel soil. Evident chemical difference between the soil and debris-flow units was caused essentially by carbonate dissolution from soils. The debris-flow sequences indicate that the climate of the upper Jinsha River valley during the Early Pleistocene was characterized by a remarkable wet-dry alternation and would be warmer than today. The study area would be uplifted by 1300 m since the Early Pleistocene.

What triggered debris flows and other mass movements in this area? Previous researches thought that the occurrence of large scale debris flows being closely related to heavy precipitation during the interglacial periods [8] or the strengthening summer monsoon periods [1,9,10].

In this area the precipitation is mainly subjected to influence of the southwest monsoon, showing very significant spatial and temporal differences. It is concentrated between June and September, accounting for 80% of the total annual precipitation. The valley areas, located in the rain shadow between two high mountain ranges, generally receive a less rainfall (~300 mm yr-1). Therefore, such valleys areas are relatively dry and hot. The vegetation in the dry valley areas below 2700 m is chiefly composed of shrubs and grass with few trees.

The debris-flow accumulation we studied occurs in the piedmont west of Benzilan Town, Deqin County, northwestern Yunnan Province, Southwest China and about 2 km away from the Jinsha River (Figure 1). 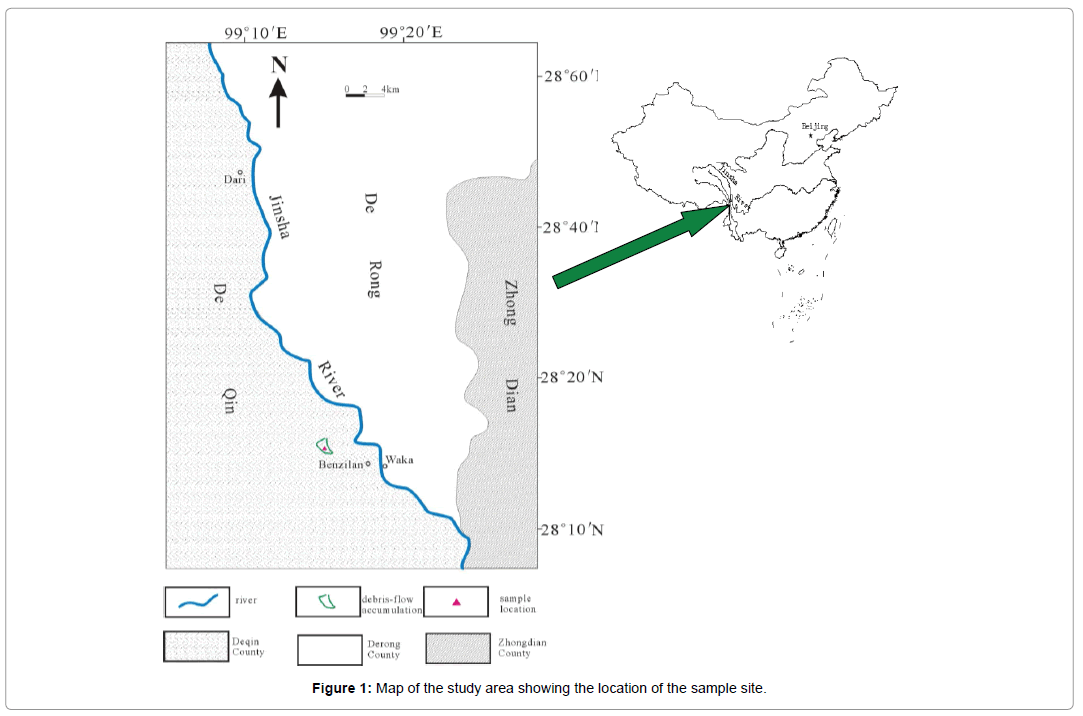 Figure 1: Map of the study area showing the location of the sample site.

The debris-flow accumulation is ~700 meters wide and averages 100 meters thick. The outcropping elevation of its bottom is 2600 m. Its bedrock mainly consists of slate and limestone belonging to the Middle Devonian Formation.

The debris-flow accumulation looks to be composed of debris-flow material and reddish gravel soils (Figure 2). Both seem to constitute a clear binary structure. The similar structure can be also seen in old fluvial terraces along the upper reach of the Jinsha River. The debrisflow accumulation is generally exposed along highway cut slopes and gullies. We selected two profiles to observe, describe, sample and analyze (Figure 3). 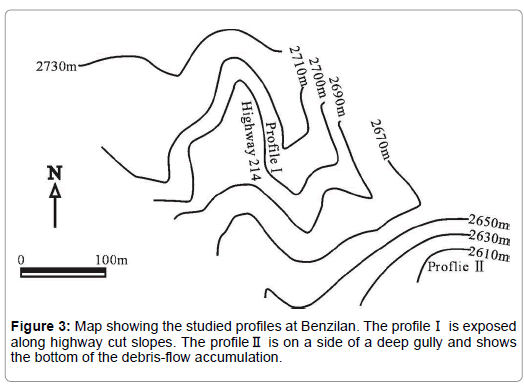 Figure 3: Map showing the studied profiles at Benzilan. The profile I is exposed along highway cut slopes. The profile II is on a side of a deep gully and shows the bottom of the debris-flow accumulation. 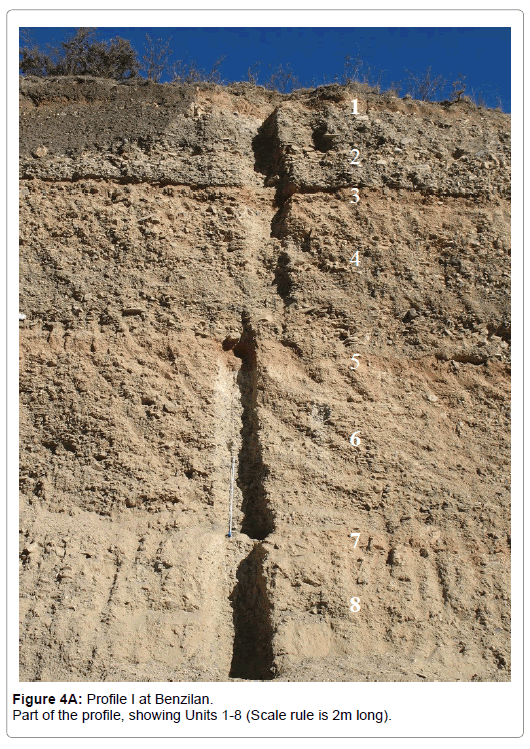 Figure 4A: Profile I at Benzilan.
Part of the profile, showing Units 1-8 (Scale rule is 2m long). 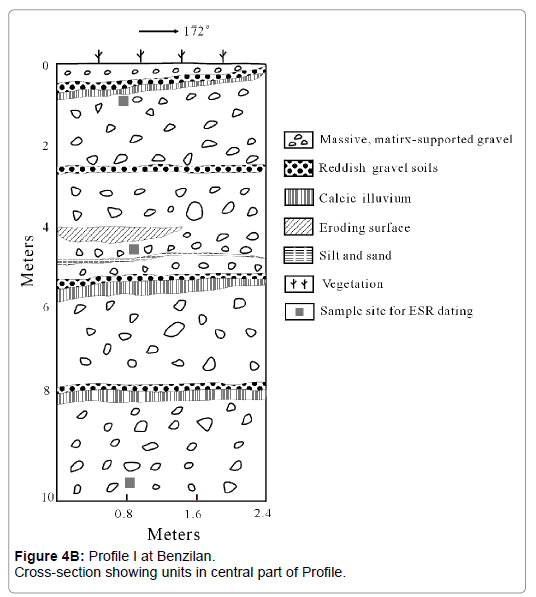 Figure 4B: Profile I at Benzilan.
Cross-section showing units in central part of Profile. In the two profiles we have seen that except their color, thickness and debris content, the two kinds of units seem not to have significant differences. The reddish gravel soil has obvious weathering features and looks the weathered debris-flow. Moreover, a sequence of soil genesis can be observed in the two profiles, that is, Ah-B-C from top to bottom.

The profiles were excavated down 40 cm deep to collect fresh samples. We made the following analyses for the collected samples: particle size, clay content, major element, pollen, and electronic-spinresonance (ESR) dating. The major element analysis was carried out using an X-ray fluorescence spectrometer (XRF-1500) in Institute of Geology and Geophysics, CAS. The ESR dating was carried out using an EMX –type instrument in the Key Laboratory of Qingdao Institute of Marine Geology.

Table 1: Grain-size analyses of the debris flow units and the reddish soil units. 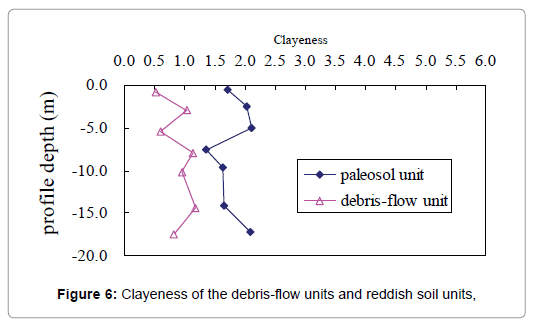 Figure 6: Clayeness of the debris-flow units and reddish soil units,

The ratio of Al2O3/ SiO2 for the reddish gravel soil units generally is in a range of 0.16-0.22 (Figure 7) and little more than that for the debris flow units. This shows that the reddish gravel soil units would form in a low energy and weak weathering condition, that is, the early weathering of the debris flow accumulation- the mother material of the weathered debris flow would take place in such a condition. Under this condition, the leaching out of SiO2 was very weak and the enrichment of aluminum was very low. Perhaps, the low aluminum might be due to the leaching out of aluminum oxides.

The ratio of Ti/Al is an index to reflect whether the mother materials of sediments are consistent or not. In profile I, the ratios of Ti/Al for individual reddish gravel soil units are in a range of 0.16-0.18 (Figure 7). Moreover, they have only a little difference from those for the debris flow units, 0.11-0.14. This shows that the mother material of the reddish gravel soils should be the debris flow materials.

CIA is an index to reflect the weathering degree and its calculation formula is [Al2O3/(Al2O3+CaO+Na2O+ K2O)]× 100. The CIA for the reddish gravel soil units is in a range of 64-75, suggesting that these units should be weak weathered.

We did the semi-quantitative clay mineral analysis for the soil units and debris-flow units in both profiles. The clay minerals in the debrisflow units are firstly chlorite (33% - 65%) and secondly hydromica (5% - 20%). The quartz ranges from 2%-5%. The chlorite content in the soil units decreases by 20% - 30% compared with that in the debris-flow units, (Figure 8). No kaolinite was found in both types of the units. Such a clay mineral assemblage means that the reddish gravel soil should form in a relatively dry climate and be lower in weathering degree. 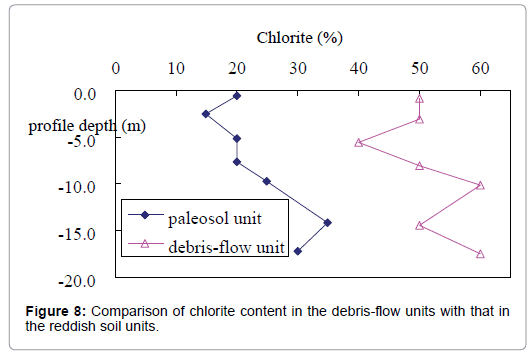 Figure 8: Comparison of chlorite content in the debris-flow units with that in the reddish soil units.

Table 3: Pollen characteristics of the debris-flow units and reddish soil units in Profile I.

The Artemisia pollens in the debris flow units (18.1-25.8%) are more than those in the reddish gravel soil units (6.1-9.2%), which suggests that the debris flow should form in a warmer and more humid climate.

Table 4: ESR dating results of the sandy samples from the debris-flow units.

The SE margin of the Tibetan Plateau has experienced an intense tectonic uplift since the Early Pleistocene [7,9,14,15]. The elevation of the debris flow accumulation studied supports this opinion. The mean annual temperature to form the modern reddish soils is between 22- 25°C [16]. The elevation of the debris flow accumulation studied is 2600 m where the mean annual temperature today is 12.2°C. This means that the debris flow accumulation should form at a much lower elevation than its present elevation. The elevation where the modern reddish soils are distributed on the SE margin of the TP is between 1000-1300 m [17]. Supposing the perpendicular declining rate of the mean temperature is 0.7°C ·100m-1, the elevation to the reddish gravel soil should be 1300 m and the uplift magnitude of the study area since the Early Pleistocene should approximate to 1300 m.

This research study was supported by the National Natural Science Foundation of China (Grants 41571012 and 41230743) and the Fundamental Research Funds for the Central Universities (Grant 2652015060). The authors would like to thank the anonymous reviewers for their critical reviews and efforts which were devoted to improving the manuscript, and for also their helpful comments and suggestions.

Copyright: © 2017 Wu S, et al. This is an open-access article distributed under the terms of the Creative Commons Attribution License, which permits unrestricted use, distribution, and reproduction in any medium, provided the original author and source are credited.
Top