Development and Manufacturing of World Grade Programmable Thermal Cyclers for Polymerase Chain Reaction in Pakistan: A Case of Biomedical Engineering

Development and Manufacturing of World Grade Programmable Thermal Cyclers for Polymerase Chain Reaction in Pakistan: A Case of Biomedical Engineering

Manufacturing is the backbone of a modern state and has a direct impact on life style of a common person of a society. We present here the development and manufacturing of Polymerase Chain Reaction (PCR) machines by the Pakistan Atomic Energy Commission (PAEC), Pakistan. Steps of the development and manufacturing of PCR machines are explained. Important design features of MERADD PCR machines and their implementation are documented here. Results of the MERADD PCR machine are compared with those of competitive imported machines. MERADD is the sole manufacturer of PCR machines in Pakistan. Quality assurance and cost analysis are also given. MERADD PCR machines produce as good results as by the imported machines, but cost is significantly lower. This paper is useful for a broad community of developers/manufacturers of medical devices and biomedical engineering in developing countries around the world.

Biotechnology is the application of science and engineering to the world of organisms [1]. Polymerase Chain Reaction (PCR) is a method used in biotechnology to multiply a single copy or a few copies of a specific segment of DNA into thousands to millions of copies of a specific DNA sequence. It mimics the basic mechanism of DNA replication [2-4]. Quantitative measurements are possible using advanced version of PCR, called real time PCR [5]. PCR was invented by Dr. Kary Mullis in the 1980s. Mullis was awarded Nobel Prize in Chemistry in 1993 for this invention. PCR has various applications, including molecular diagnostics of human and animal diseases [6-8], forensics [9], food technology [10] and environmental studies [11,12]. Figure 1A shows three stages of a PCR cycle. These stages are called denaturation, annealing and extension. In the denaturation stage, the template DNA is heated beyond the melting point of its two complementary strands. It separates the two strands of the DNA. In the second stage annealing, the temperature is reduced to allow the primers to bind to their complementary sequences on the single strands. In the third stage of extension, the DNA polymerase extends the primers by integrating nucleotides to the developing DNA strand [2]. Amplification of the target DNA takes place in the repetition of a PCR cycle. A variety of PCR machines are in use around the world [2,13-15] (Figure 1B). Advantages of PCR include its simplicity, fast speed and high sensitivity. Applications of PCR range from agriculture to biomedical research. Experimental steps of the PCR procedure are sample preparation, DNA amplification and product detection. During amplification, the sample is cycled between denaturation, annealing and extension temperature. The typical ranges of denaturation and annealing are, respectively, 90-95°C and 50-65°C. The extension happens around 72°C [16]. The next section describes PCR machines. 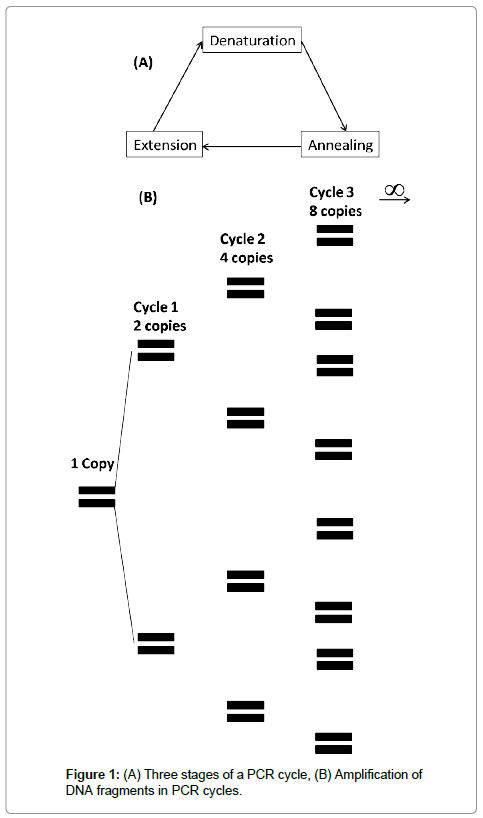 Figure 1: (A) Three stages of a PCR cycle, (B) Amplification of DNA fragments in PCR cycles.

Figure 2 shows the general function of a typical/conventional PCR. Temperature cyler in the figure is to conduct three steps of PCR, denaturation, annealing and extension. DNA micture contains the target DNA, primers, nucleotides and DNA polymerase. Heater at the top of the mixture is to supress vapor formation in the tube. Temperature of the heater remains the same and is kept above the denaturation temperature.

Figure 2: A schematic showing the function of a typical PCR.

Many variants of PCR machines have been developed. Some of them are commercially available. We do not review here all the available or reported PCR machines but are documenting only leading or general types.

Conventional PCR machine: It is also called qualitative PCR. Its components are of macroscopic size. Normally, it uses Peltier cell [17] thermal cycling. Other parts include power system and control system. DNA mixture of macroscopic size (fraction of a milliliter) is needed. Several samples can be processed or analyzed simultaneously. DNA amplification up to millions is possible in hours’ time scale. Please see details later in the paper.

Real-time PCR machine: The same principal of conventional PCR is implemented in real-time PCR with the additional capability of monitoring the DNA amplification in real time using a camera or a detector. The amplification of DNA is coupled the fluorescence production during the process. The fluorescence is produced by the added dye like SYBR green or a detection solution like [21].

MERADD has developed several models of conventional PCR machines. The latest model is Amplicon PTC-15. We describe below the R&D work and manufacturing of PCR machines at MERADD.

MERADD has two Research & Development (R&D) labs, one Assembly Hall in which machines are assembled from components, one technical store where electronic and mechanical components are catalogued with easily usable records of the components in paper and soft forms, and mechanical/electronics workshop in which components are fabricated or altered. MERADD outsource a part of the work to institutions and factories mainly in Lahore and Islamabad. MERADD also develop/manufacture other medical equipments which are not described here.

MERADD develops/manufactures medical equipment in interest of the scientific community. Clients are charged for the manufacturing cost and R&D expenditure. Salaries of the employees are being paid by the PAEC. They are not included in the price of the equipment being sold to the universities and institutes in Pakistan. Repair and maintenance after the warranty period are provided to the clients on no profit no loss basis. MERADD understand the implications of the wastes on the environment. MERADD aims to keep its activities harmless to the environment. MERADD manufacturing strategy model emphasizes on the indigenization, flexibility of the equipment use in biomedical laboratories, result reliability, consumer choice and the quality.

The latest model of the MERADD PCR machines is Amplicon PTC- 15. Its specifications are given in Table 1. It is a locally manufactured, high-tech Peltier cell based, auto adjustment for sample plate and heater plate contact, reproducible and trustworthy results, low cost and low power consumption technology. Quick maintenance services are provided to the clients around the country.

Manufacturing is transforming the raw materials into a usable product using labour, machines and tools. It is a wide spread term which covers making or fabrication of material things of all types/ sizes at all scales. It has direct impact on life style and modern facilities available to citizens of a state. Briefly, it is considered backbone of a state. Pakistan is a developing country and has limited infrastructure for manufacturing modern equipment. MERADD is a small factory (of the PAEC) where medical equipments are developed for the research and clinical purposes. MERADD members have multiple duties in MERADD groups. MERADD is architectured as design group, materials selection group, purchasing group, process planning group, marketing group and customer services group.

MERADD is manufacturing PCR machines for the last 15 years. Consumption of MERADD PCR machines is in local universities and research institutes. Warrant period of the produced PCR machines is one year while maintenance to the clients is provided at cheaper rates for any period of the use. Our engineers/technicians visit the universities and institutes around the country for installation and maintenance. Manufactured PCR machines have both mechanical and electronic parts. Machines used in mechanical parts include CNC machines, press machines, dye moulding systems and Lathe machines. Electronic parts are fabricated using P-Cad designing, PCB manufacturing, soldering machines and screen printing machines. Figure 3 shows MERADD PCR machine PTC-15, (left) in open condition and (right) in ready to use condition. 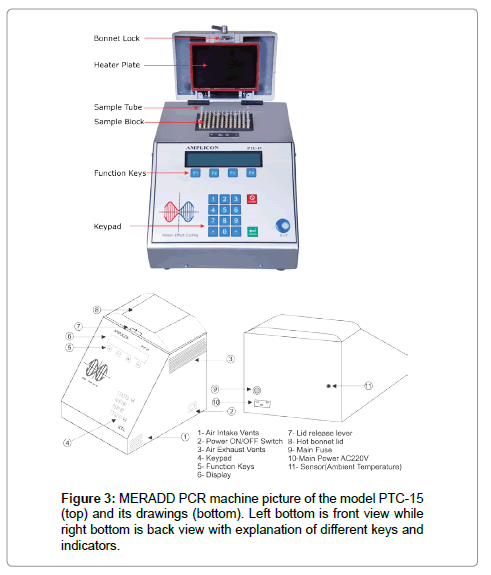 Figure 3: MERADD PCR machine picture of the model PTC-15 (top) and its drawings (bottom). Left bottom is front view while right bottom is back view with explanation of different keys and indicators.

MERADD has developed a quality control procedure for manufactured PCR machines. One person from the MERADD serves as a quality inspector. All the manufactured parts are inspected through naked eye and magnifying glass to detect any defect or fault. Only fault free components are selected for the manufacturing purpose. Quality control guidelines have been prepared and are followed strictly. Components found defective during inspection are corrected or rejected depending upon the nature of the defect. 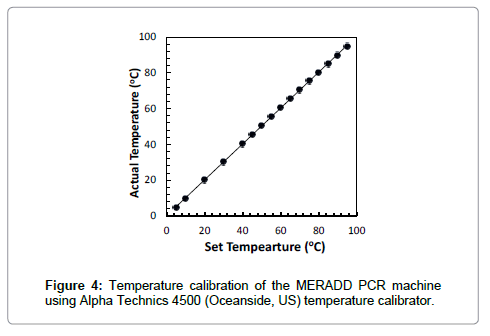 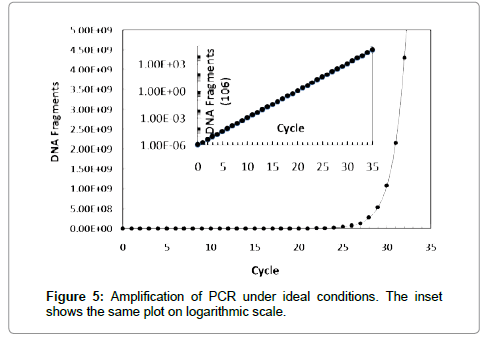 Figure 5: Amplification of PCR under ideal conditions. The inset shows the same plot on logarithmic scale. Copyright: © 2018 Rana MA, et al. This is an open-access article distributed under the terms of the Creative Commons Attribution License, which permits unrestricted use, distribution, and reproduction in any medium, provided the original author and source are credited.