Continuity of Care in Emergency Department and Elderly

Continuity of Care in Emergency Department and Elderly

Background: Numerous studies have suggested that better continuity of care (COC) can lead to fewer emergency department (ED) visits. The loss of information is a constant demand for unnecessary services. This study aimed to determine the patterns of informational COC in ED utilization and increased health care utilization may be apparent in a health care system that lacks a referral system. Materials and methods: In a study conducted in November 2015 were evaluated episodes of ED, setting as lack of continuity of care episodes with discharged to home. The variables analyzed were: sex, age, the color of Manchester Triage (MTS), COC, diagnosis by ICD9, destination, and readmission. We used descriptive statistics and chi-square were used for a p-value <0.05. Results: The number of older episodes was 34% (2729/8037). The most common profile was women with 54 years old, which diagnosis was injury and poisoning, screened with yellow color and discharged to home. COC represented 56.9% of the episodes. The readmission to the ED was 12.8%. Determinants associated with episodes without COC were young patients (RR=1.13, CI=1.10 to 1.17), with a low priority of MTS (RR 1.46, 95% CI 1.35-1.57) and no readmission to ED (RR 1.94, 95% CI 1.70-2.21) Conclusions: In conclusion, the ward admission rate of elderly patients who visited the ED was higher than the younger adult patients. Our analysis showed a higher level of continuity with an increased rate of hospitalization, after adjustment for the patient's age group. The determinants associated with episodes without COC were young patients, with a low priority of MTS and no readmission to ED.

In Portugal, the proportion of senior citizens in the population is increasing likewise in worldwide. Adults aged 65 years constitute 19.2% of the population. The index dependence is a relevant indicator for the field of continuing care to elderly, and Portugal had in 2009, one of the highest dependency rates in the Europe, with a value of 26.3 [1]. Increased dependence and the growing number of elderly increase health problems and medical demands. Elderly patients have higher rates of emergency department (ED) visits compared to young adults and account for 12% and 24% of all ED visits worldwide [2]. Hospital admission rate, the need for intensive care, return visits, and length of ED stay are higher for elderly patients than younger patients. Elderly patients are most commonly presented to the ED with medical problems such as cardiac, respiratory, and neuropsychiatric conditions, but also have a high rate of fall-related injuries.

The older population is also vulnerable to care fragmentation: such patients see more clinicians for both chronic and acute-on-chronic conditions [3]. This care fragmentation is risky as studies of elderly indicate that low continuity of care (COC) and is associated with greater inappropriate medication prescribing, higher cost of care, more avoidable hospitalizations, greater use of emergency services, and higher all-cause mortality.

The aim of this study is to evaluate the patterns of informational COC in ED utilization and to compare ED data of younger and elderly patients.

Centro Hospitalar Gaia-Espinho (CHVNG-E) where the present study was conducted offers health care services to the two municipalities with a population of 334110. This tertiary level public hospital is highly specialized staff and technical equipment. The ED is managed by doctors from different disciplines; in addition to emergency physicians, different specialists are present at the ED at all time for consultation. Patients are commonly admitted directly to the ED without being referred by the family physician because access to the ED is very easy. According to regulations in Portugal, ED admissions at all public hospitals have a low charge and most of them free.

Retrospective and descriptive analyses were conducted. The population of the study included all patients aged ≥ 18 years who visited the ED in November in the year 2015. For the purpose of this study, patients aged ≥ 65 years were defined as elderly and those aged <65 years as younger adults. Variables of the study are age, sex, MTS, diagnosis at the ED, destination, readmission and COC. Diagnosis of the patients who visited the ED was made according to the International Statistical Classification of Diseases 9th Revision (ICD9) (Table 1) [4].

Table 1: ED diagnosis of patients according to ICD-9-MC codes.

The authors stratified the MTS in the term "high priority" for the colors red, orange and yellow and "low priority" for green, blue and white [5].

For our purposes, we assumed informational COC that define the extent to which clinical information is available to all clinicians participating in a patient's care [6]. So, the patient had had no COC when was discharged to home or desertion. The study has been approved by the Research Ethics Committee at the CHVNG-E.

Data were analyzed using SPSS version 22.0 (SPSS Inc., Chicago, IL, USA). Descriptive findings were presented with the frequency tables. The Chi-square test was used to compare frequency differences between groups and relative risk. A p-value of <0.05 was considered statistically significant.

The profile to ED admission it was a woman with 54 years old, with ICD 9 diagnosis injury and poisoning, screened with yellow color and discharge to home.

The most common diagnoses were non-specific, injury and poisoning and relating to "symptoms, signs, and ill-defined conditions" for both groups (Table 1). However, the rate of injury disorders among the younger patients was significantly higher than the elderly patients (p=0.0001). The circulatory and respiratory system among the elderly patients were substantially higher than those in the younger patients (p=0.0001), whereas the rates of and musculoskeletal disorders were higher in younger (p=0.0001).

Table 2: Disposition of patients in the emergency department.

Across the entire sample, 49.4% of the subjects had no COC, since they had discharged to home 48.7% and 0.7% desertion. In the sample, the analysis of the stratification of MTS showed the high priority of 74.2% and readmission to the ED was 10.9%. 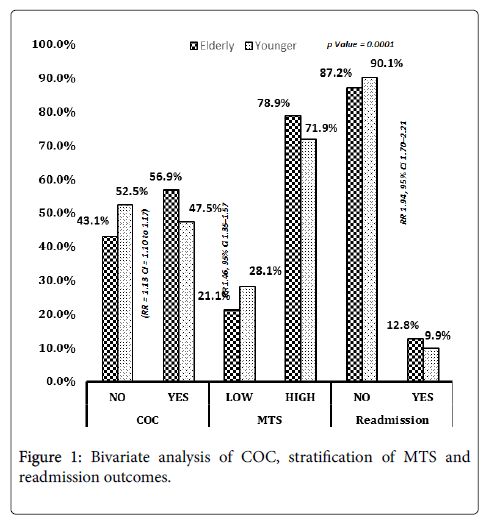 The current study, using population-based administrative databases of all patients aged ≥ 18 years who visited the ED over a 1-month period. In our sample, the proportion of elderly patients among all those attending the ED was higher than reported elsewhere in the literature, i.e. 34% as opposed to 12-24% [2]. This study demonstrates that continuity of care is enhanced by improving the transfer of clinical information between the ED and family physicians, as well as patients having hospital physician follow-up.

The authors have chosen the component informational of COC in emergency department environment, since health system Portuguese has an insufficient primary care network and the patients are commonly admitted directly to the ED without being referred.

Continuity of care (COC) is widely considered to be an essential component of high-quality patient care [6], especially for older adults and those with multiple chronic conditions requiring consistent management and follow-up. Indeed, we found that elderly patients were associated to COC, a high priority of MTS, inpatient, and readmission. In our study, the rate of hospitalization and mortality in the elderly patients who visited the ED was higher than the younger patients. This suggests that the levels of medical conditions of the elderly patients who visited the ED were coded with a high priority of MTS and the necessity of having hospital physician follow-up. Previous studies reported that one-third or a half of the elderly patients were hospitalized [7,8]. Severity and complexity of medical conditions of these patients increase the rate of hospitalization and the need for continuity of care.

The relationship between the priority of MTS and two age groups revealed that the triage category worsened as the age of patients increased. Singal et al. [9] studied geriatric recourse to the emergency department. They found that geriatric patients that suffered more from comorbid diseases stayed for longer periods of time in the emergency department and had a higher rate of hospitalization and readmission emergency compared to younger patients.

In this study, disorders related to the circulatory and the respiratory systems were the most common presenting reasons for the ED visits of elderly group patients.

In the United States, 20% of emergency rooms consultations are for musculoskeletal complaints [12]. Our study, the most commonly presented complaints were of injury origin at the ED and had been shown to be predominantly musculoskeletal disorders in the group young patients. A similar finding [13], injuries related to the musculoskeletal system, were the most common diagnoses in ED at Switzerland. Accessibility and convenience probably were the decisions to bypass the primary care, which could indicate a perceived or actual block to care access in the minds of the patients, even during office hours when is available. For these reasons, it can be explained the lower COC and low priority of MTS for young patients, and high readmission in elderly identified in our study.

Our study had several limitations. First, the percentage of selfreferral utilization by patients was unknown. Second, functional independency status of elderly patients was not recorded. Third, the length of stay of patients under ED observation and the period from reporting of complaints to ED attendance were also not recorded. Fourth, we only use informational component of COC. Therefore, little is known about how patient COC experiences relate to patient outcomes and whether those relationships are consistent with those found when this COC measure was used. Fifth, eight emergency teams are constituted for different physicians and the criterion for informational COC is not standardized.

Our analysis showed an association between a higher level of continuity and an increased rate of hospitalization, after adjustment for the patient's age group. The determinants associated with episodes without COC were young patients, with a low priority of MTS and no readmission to ED.

Copyright: © 2016 Gonçalo S, et al. This is an open-access article distributed under the terms of the Creative Commons Attribution License; which permits unrestricted use; distribution; and reproduction in any medium; provided the original author and source are credited.