Purpose: The dynamics of the patient-physician encounter in the outpatient clinical setting has changed with the advent of electronic medical health records. Previous studies suggest that computer use does not diminish patient satisfaction as long as the physician maintains appropriate verbal and nonverbal communication (posture, tone of voice, gesture, and direct eye contact). We performed a case-control study to analyze the role of computer positioning and its effect on direct eye contact.
Method: A prospective, comparative study of 54 patient encounters assessing the effects of computer position setup on the amount of direct eye contact was performed. The setups aligned clinician, computer monitor and keyboard: (1) on axis, (2) off axis, and (3) a hybrid setup where a wireless keyboard was placed on-axis and the monitor was off-axis. The encounters were video-recorded. The time spent by the provider in direct patient eye contact, computer time, examination time were recorded. The number of <5 second glances per encounter were also recorded. Data was collected and analyzed using one-way ANOVA and chi-square test of independence.
Result: Chi-square test for independence revealed no significant correlation between computer setup and time of patient eye contact time between the groups (p=0.999). One-way ANOVA revealed a significant difference in the number of <5 second glances between the groups, with the on-axis and hybrid setups yielding higher number of short glances. (p=0.005)
Conclusion: Computer position can play a role in increasing patient physician eye contact. These findings may be relevant when designing clinical encounter space.

With the advent of electronic medical records (EMR), the dynamics of patient-physician interaction in the outpatient clinic setting have changed considerably. As healthcare facilities move away from paper charts to electronic health records, EMR implementation into the medical world has demonstrated an increase in efficiency and productivity in patient care while also lowering medical costs in the long run [1-6]. With the growing utilization of EMR, the addition of computers in a clinical setting has become a necessity. Though the physician has ease to access previous health records, imaging and lab data, the presence of the computer has become a third entity within the private space of the patient-physician exam room. Despite apparent benefits, physicians have been concerned about whether computers are a detriment towards patient-physician rapport [5-8]. With the goal of achieving the best patient care possible, doctors worry that the presence of a computer can lead to a loss of patient eye contact and diminish patient satisfaction [3]. In recent years, there have been several studies that have tried to address these concerns about computer use in an outpatient clinic. A study done by Gadd et al. showed that although physicians were most concerned about losing patient eye contact, the use of EMR during outpatient encounters did not have a negative effect on the overall physician-patient rapport [5]. Another study done by Lelievre et al. examined computer use and its influence on patient satisfaction. The results showed that most patients had no preference on whether or not computers were used and it did not affect their overall satisfaction, as long as constant verbal and nonverbal communication was maintained [7]. Nonverbal communication included posture, tone of voice, gesture and direct eye contact [7]. Among these factors, direct eye contact was directly correlated with increased patient satisfaction, measured as maintained eye contact and short sustained glances (<5 sec) [2,4-13].

The ophthalmology clinical exam room presents a unique scenario involving the presence of not only the computer but also the slit lamp microscope. In our case-control study we examined the effect of computer positioning on direct eye contact in the ambulatory ophthalmology setting. Our hypothesis was that a computer position impacts the amount of patient-physician eye contact. This study was conducted in compliance with the rules and regulations of the Health Insurance Portability and Accountability Act and all applicable federal and state laws, and in adherence to the tenets of the Declaration of Helsinki.

After IRB approval was obtained from the University of California in Irvine, videotape monitoring was utilized to film patient physician encounters. All videos were recorded without sound, so as to maintain patient confidentiality throughout the study. Video recorders were positioned in the room so that the patient’s face could not be seen during the course of the encounter (Figure 1 and Figure 2). A total of 54 patient encounters were filmed at an academic medical center ophthalmology clinic. These patient encounters were randomized to one of three clinical encounter examination room set-ups: an on-axis computer and on-axis keyboard group (On-axis group; see Figure 1), off-axis keyboard and off-axis computer (Off-axis group; see Figure 2), and on-axis wireless keyboard and off-axis computer monitor (Hybrid group; see Figure 3). The On-axis group (Figure 1) placed the computer and keyboard on a swivel mount which allowed the physician to have a direct line of sight to the patient and thus a more ergonomic way to maintain eye contact. The Off-axis group (Figure 2) placed the computer and keyboard on a side table and required the physician to swing his or her entire body nearly 180 degrees in order to make eye contact with the patient. This type of setup is commonly found in many doctors’ practices where computers have been added to the typical workspace in each clinic room. Figure 1: Computer position in On-axis group was situated on a swivel axis against the wall so that the physician faces the patient even when on the computer. Figure 2: Computer position in Off-axis group was situated on the table. The physician must turn his/her back 180 degrees from the computer to make eye contact with the patient. Figure 3: In the Hybrid group, a wireless keyboard was used to replace the standard one. The physician can now move freely and look at the patient’s direction while typing.

The Hybrid group (Figure 3) placed the computer on the side table as in the Off-axis group, but also included a wireless keyboard which was placed on the physician’s lap in order to make it simpler to maintain eye contact while taking notes in the medical record. After the video recordings were obtained, they were analyzed and the exact time of patient- physician eye contact was calculated. Videos that could not precisely show how the physician directed their gaze throughout the encounter were excluded. To prevent observational bias from the physical presence of the camera in the clinic room, neither physician nor patient was aware when the camera was turned on for recording. The primary outcome variables analyzed were proportion of slit lamp time, computer time, patient eye contact time, and the number of 5 second glances per encounter (Table 1). To adjust for differences in encounter times, each variable was calculated as a percent of total encounter. Wait time was not included, nor was time of direct interaction between the resident and attending physician when both were present in the room. Table 1 lists the variables examined as well as how each variable was defined. Chi-square test for independence and one way ANOVA were used to determine statistical significance using alpha of 0.05 as a threshold. Statistics were analyzed using Microsoft Excel.

Table 1: List of primary outcome variables and how these were derived from video footage. 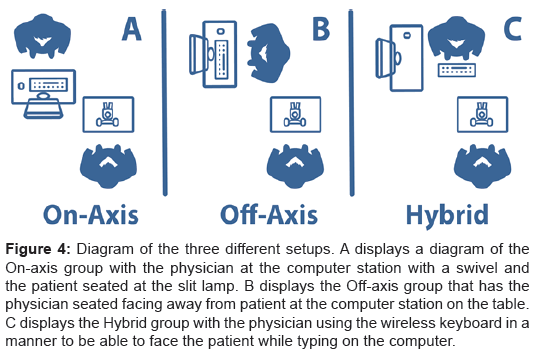 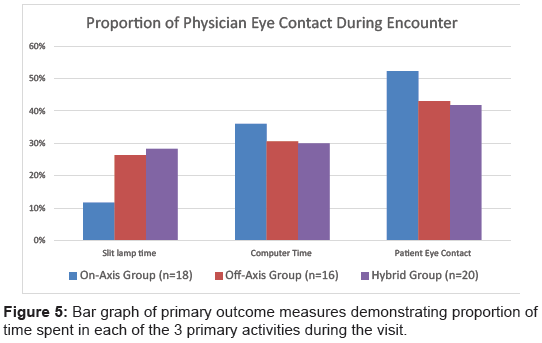 Figure 5: Bar graph of primary outcome measures demonstrating proportion of time spent in each of the 3 primary activities during the visit.

Our results indicate that computer positioning impacts the amount of direct eye contact in the form of short sustained glances. The on-axis and hybrid setups had the highest number of <5 second glances at 5.1 glances and 5.4 glances per encounter respectively (p=0.005) compared to the off axis group that had 1.5 glances. The on-axis setup also had the highest overall percent of direct eye-contact at 52% compared to the hybrid and off-axis setups, however this difference was not found to be statistically significant. As hypothesized, the on-axis setup made direct eye contact in the form of <5 second glances ergonomically easier for the physician (Figure 1). In order to make eye contact with the patient, the physician need only look up from his or her computer screen. We found in our hybrid setup, that even keeping an on-axis keyboard with an off axis computer screen was enough to yield similar results. In both scenarios, the computer-keyboard setup was centered around the patient, and ergonomically encouraged direct eye contact. By contrast, in order for the physician to engage in direct eye contact in the offaxis group, the physician needed to turn his or her body 180 degrees. Though it would be theoretically possible for the physician in the offaxis group to make eye direct contact by turning his or her head 90 degrees, this was rarely demonstrated in our video monitoring possibly due to ergonomic restraints. Interestingly, the overall percent time in direct eye contact was not statistically significantly different between the three groups. There may be a few explanations for this. Many of the physicians using the Hybrid setup reported being less familiar with using the wireless keyboard, and therefore did not use the keyboard as intended. Though the keyboard and computer screen were both repositioned in the hybrid setup (Figure 2), some physicians actually reverted the screens to the off-axis setup due to greater familiarity with this layout. Not providing enough time and guidance for the physician to acclimate to his or her modified environment was a shortcoming of our study.

Maintaining a patient centered environment in light of the EMR can be challenging. The goal of our study was to demonstrate the best ergonomic position for the patient, physician and computer to yield the greatest amount of direct eye contact and nonverbal communication. Small attention to detail such as where the computer or keyboard is placed and the ergonomic position of the physician during computer use can make a large difference in patient eye contact and more importantly in patient satisfaction [3]. Many hospitals have now adopted computers on wheels (COWs) which make it even easier to adjust optimal computer positioning. It is important to note that the highest reward in terms of patient satisfaction comes when the physician combines elements of both verbal and nonverbal communication [5]. Shachak et al. reports a few key ways to allow for such multifaceted communication include: acknowledging the presence of the EMR to the patient, reading aloud while the physician is typing his or her notes, utilizing emphatic language, and disengaging from the computer completely when sensitive issues are being discussed [5,10]. Another study demonstrated short breaks during computer use through head nodding or short sustained glances coupled with verbal utterances yielded high patient satisfaction [11]. These glances were shown to be more powerful when initiated by the physician rather than the patient [12]. In short, connecting with your patient and making them feel comfortable should be just as important as coming up with the right diagnosis, especially in an ophthalmology clinic where the number of devices in the room can be intimidating to a patient. This small effort to improve eye contact may help foster a stronger bond with patients and ultimately leads to better patient care.

The authors acknowledge departmental support from an RPB unrestricted grant.

Copyright: Â© 2018 Ahmed SF, et al. This is an open-access article distributed under the terms of the Creative Commons Attribution License, which permits unrestricted use, distribution, and reproduction in any medium, provided the original author and source are credited.
Top