Collective Actions in Worker's Health: The Ergonomics Primer for the Brazilian Footwear Industry

Collective Actions in Worker's Health: The Ergonomics Primer for the Brazilian Footwear Industry

This article reports on a case of collective actions in worker's health that aims to minimize the health, safety and quality of life problems of workers in the Brazilian footwear industry. These actions were carried out by a Tripartite group that involved the Ministry of Labor, employers 'unions and a representation of ABICALÇADOS (Brazilian Association of Footwear Industries) and Footwear Industry Workers' Unions. The result of this work culminated in the elaboration of an orientation booklet for the actions in ergonomics to be implant in the footwear industries throughout Brazil.

In order to have better expose a motivation of the Tripartite Group in the search for alternatives to improve the health and quality of life of the footwear workers, it is necessary to contextualize an update and comprehensiveness of the Brazilian industrial park. The Brazilian footwear park in 2014 contemplated approximately 7.9 thousand industries, with 343 thousand workers acting directly. In terms of performance in the states, from the southern region of the world, in Brazil, mainly to the Southeast and Northeast regions of the country, with emphasis on the interior of the state of São Paulo (cities of Jaú, Franca and Birigui) and Em states Such as Ceará and Bahia In recent years there has also been a growth in footwear production in the state of Santa Catarina (São João Batista region) and in Minas Gerais (Nova Serrana region) [1].

In terms of modes of production, there are predominantly no artisanal processes, which are a construction process, which requires a large contingent of man power.

It was observe that the work process takes place from a production line where a daily production has a pre-established goal and the pairs of footwear are "pulled" by a treadmill that dictates the rhythm of work according to the speed of the treadmill. Another aspect that is still a prediction and is a feature of the Fordist Taylorist system is a single task accomplishment throughout the workday and stay held for months and often for years. For example, the worker has just been a super specialist for a very short task, since the operational cycle can be, in some cases, seconds. This can be exemplifying by the cycle time of one of the units that is a put on eyelets (which metal holes where it is past are or shoelace tying the shoe). This operation on average has the operating cycle in the range of 8-10 s, so it is highly repetitive. Here it is worth bringing the concept of Silverstein (1986) that mentions the cycle less than 30 s is repetitive.

Due to the characteristics that have been exposed so far, and considering that despite our recent years, it is a migration of most of the footwear industries to China and India, this segment is still one of the industrial sectors that generate most non-country employment [1]. On the other hand, it was understood the size and scope in terms of the contingent of workers exposed to these risks, which operate in the production system.

The high repetitiveness has implicit other factors that tend to be related to the footwear sufferer, since a repetition and the accelerated rhythm of work in physiological terms, can exhaust as muscle skeletal capacities and lead muscles to muscle fatigue and inflammatory processes. Moreover, a high repetitiveness tends to induce monotony, since work becomes so meaningless and empty of meaning that it leads the worker to "automate" their processes. These elements of psychoemotional order can induce stress and depression. As well as, they are risk enhancers for accidents.

With regard to work postures, most of the Brazilian footwear industries adopted a standing posture throughout the workday, in most activities, including those that have handcrafted features and involve fine motor skills. Activities that can be perform in the posture sent and/or alternative (Technical Note 06/2001). This implies biomechanical constraint related to the maintenance of static posture involving all of the body's supporting muscles as well as passive circulatory problems of blood stasis in the lower main ones. Standing work is also a problem with the consequence of postural problems such as osteo joint erosions of the spine, algias, and postural deviations.

In addition, factors related to working conditions and resulting human costs (illness and accidents) related to the way work was organize in the Brazilian footwear industry may be related to poor qualification, content and characteristics of activities and division by a very objective and restricted productive system, limiting the worker's performance to a single operation. Hence, factors such as demotivation, illness and absenteeism are generally correlated with the loss of the meaning of the work resulting from the Fordist Taylorist system. This system, which is still very much in force in the footwear industry, restricts the work of the worker, implying a loss of the meaning of the work, once they perform the same task for months and years, if not, their whole life as a worker subject [2-4].

In view of this reality, one of the most relevant strategies for improving working conditions is ergonomic intervention. Ergonomics is a science that seeks improvements in the workplace in order to maintain healthy and productive capacity. The main objective of ergonomics is to adapt work to the human being, rather than the human being to work. The basis of an ergonomic intervention should be focused on a macro-oriented and comprehensive vision, ranging from job adaptation to organizational issues such as interference in industrial production mode, process and people management [4].

In the footwear industry in specific, from the inspections and intervention of the Ministry of Labor and Public Ministry of labor, a process of actions in ergonomics began. In this context, the posts for postural alternation were modified and adapted, multifunctional work systems were implemented, with interference in the work organization, including the analysis and intervention in the rhythm, speed, journey and work breaks. For the activities and jobs that had implicit handling and cargo transportation, auxiliary devices were creating to minimize exposure to risk. These interventions occurred in most of the footwear industry of Rio Grande do Sul. However, it was understood that, although relevant, they would not be enough to reach the entire Brazilian footwear park. From this, it was decide, together with the competent organs, to elaborate a booklet that was instructive and guiding in character and had a breadth in terms of parents.

Before presenting the issues related to the preparation of the Booklet, some illustrations of activities carried out in the footwear industry described above was present. These Figures 1 and 2 illustrate the composition of the work station before and after the ergonomic intervention. Figure 1: Activities performed in standing posture in the footwear industry. Among the proposals for immediate ergonomic measures was the postural change, where the worker could freely choose his position. In this way, the workstations were configured so that they could work standing and sitting alternately. Illustrative figures follow.

Based on some of the examples presented so far, and considering that ergonomics is one of the best preventive strategies, it is necessary to work together with the technical staff, managers and, above all, the workers. Scheduling variations in posture, diversifying or expanding the set of tasks, activities or functions are understand as strategic measures of prevention.

Action Strategy: Proposal and Elaboration of the Ergonomics Booklet

Considering what has been contextualize so far, in the period between 2009 and the end of 2011, the Brazilian footwear industry, represented by Abicalçados, strategically sought a solution to the structural problems of the footwear industry in relation to accidents and work sickness. In this way, it was propose to establish a Joint Tripartite Commission on Ergonomics. A tripartite team has a representation that legitimizes actions proposed by society, since it has representatives from the sphere of workers, entrepreneurs and the Ministry of Labor. The "Ergonomics Primer: Guidelines for Worker Safety and Health".

Had a launch on July 21, 2011, at the 15th National Seminar of the Footwear Industry. The Book was composed of content that would elucidate issues related to the daily work activities and that covered all the activities that was carry out from the beginning of the process (exit of the production order) until the final product (packaging sector shipment).

The issues addressed were correlated to the content and approach proposed by the Legislation, in specific to NR 17 (Norma Regulamentadora 17-Ergonomia), of the Ministry of Labor and Employment. The approaches revolved around work postures; Furniture of workstations; Lifting, transportation and manual unloading of materials; Environmental conditions of work; Organization of work. For informational purposes, it was decided to address the experience of multifunctionality that was implanted in a footwear industry as an alternative to repeatability. It follows Figures 3 and 4 with the index of the subjects covered in the Booklet. 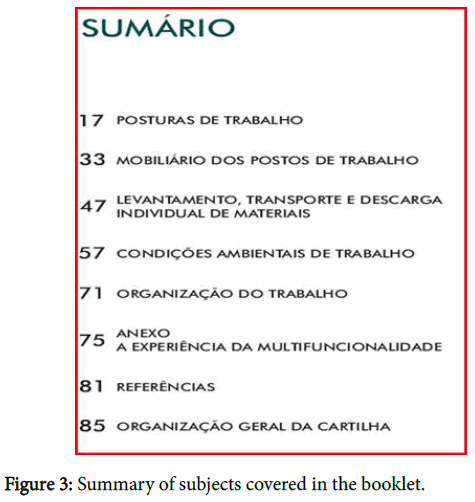 Figure 3: Summary of subjects covered in the booklet. In 2011, prime was widely publicized in all Brazilian shoe poles, with five seminars in several shoes producing states, including: São Paulo, including the footwear hubs of Birigui, Franca and Jaú; Minas Gerais; Ceará, Bahia, Rio Grande do Sul and Santa Catarina. The coverage in terms of the participation of workers, entrepreneurs, union representatives of workers and employers, academic community and health and safety personnel was extremely expressive. Initially six thousand booklets were printed and distributed at the launching events, and a further 10,000 were printed, which were widely distributed to technical professionals in health and safety, to academics in the area, businessmen and, mainly, to workers, at various moments in which they occurred Discussion forums. Following are Figures 4 and 5 from the Booklet and the moment of its launch in the National Seminar. From this context it can be affirmed that the primer was an instrument of socialization and divulgation of the principles of ergonomics, being that the companies gave excellent returns in relation to the applicability of the primer as guiding actions in the daily work. Druck and Franco [2] point out that in the current reality of collective health, if one side has technologies for the prevention of easy access and public domain, on the other, in the social realm of human relations, Culture and ideology, there is a deterioration of working relationships and consequent worsening of the risks of illness and accident [5].

Finally, based on this initiative, it is possible to infer that the joint efforts carried out on a tripartite basis were used to improve the working conditions of many workers, in an industrial situation that affected a large contingent of people. Much still needs to be done, but the Brazilian footwear industry has undoubtedly taken initiatives in terms of autonomy and resolutivity that have a great impact on health and safety, rather than simply waiting for public policy proposals.

Copyright: © 2017 Renner JS, et al. This is an open-access article distributed under the terms of the Creative Commons Attribution License, which permits unrestricted use, distribution, and reproduction in any medium, provided the original author and source are credited.
Top