Screenings for genetic modifiers, such as suppressors or enhancers, in model organisms have identified and characterized important signaling pathways. Likewise, a phenotype induced by a chemical compound can be suppressed or enhanced by another compound. Here, I introduce chemical modifier screenings as phenotype-based assays that expand therapeutic targets to unexpected molecules and that facilitate identification of target signaling pathways. Also, chemical modifier screening can be applied to predicting possible drug-drug interactions that cause adverse effects.

Genetic screenings in model organisms have discovered genes involved in diverse biological processes, such as cell cycle in Yeasts [1], programmed cell death in nematodes [2], and embryonic pattern formation in Fruit flies [3]. These genetic screenings have led to screenings for genetic modifiers, such as suppressors and enhancers, facilitating identification of the components of the signaling pathways. Some of the most successful examples of modifier gene screenings are identifications of components of receptor tyrosine kinase signaling pathways in Caenorhabditis elegans or in Drosophila melanogaster. These phenotype-base screenings accompanied discovery of unexpected molecules and expanded concepts of signaling pathways.

A phenotype induced by a chemical compound can be suppressed or enhanced by another compound. Recently, we have reported a chemical suppressor screening for inhibitors of the Wnt/β-catenin signaling pathway in zebrafish embryos [4]. Similar to a genetic modifier screening, our chemical suppressor screening restricts the target signaling by up-regulating the Wnt/β-catenin pathway with a GSK3 inhibitor, and identified inhibitors of the pathway. Because our method does not need mutants or transgenic fish lines which demand genotyping and large-scale fish facilities, application of our chemical suppressor screening may offer opportunities for phenotype-based screening to small-scale laboratories interested in chemical biology and compound screenings. Phenotype-based chemical screenings expand possibilities of therapeutic targets to molecules unexpected from in vitro assays, such as enzyme activity assays. On the other hand, target identification of a hit compound in a phenotype-based screening is usually challenging and sometimes unsuccessful. Chemical modifier screening may overcome the difficulty in phenotype-based assay by restricting target signaling pathway in vivo. Here, I summarize chemical modifier screenings and discuss their potentials that facilitate identification of target signaling pathways and that predict possible drug-drug interactions causing adverse effects.

A suppressor mutation can be defined as a second mutation that suppresses the phenotype caused by the first mutation, but is a distinct site from the first mutation. Downstream components of an oncogenic GTPase Ras1, such as Raf, MEK and MAP kinase, were identified as genetic suppressors in a Drosophila rough eye system, in which eye development was forced to be abnormal by genetic methods [5]. In addition to genetic screenings in Drosophila, those in C. elegans for suppressor of a loss-of function in let-23, encoding the EGF receptor, resulted in the discovery of a gain-of-function mutation in let-60, encoding the downstream Ras protein in this signaling pathway [6]. Screens for suppressors of the let-60 gain-of-function phenotype yielded more than thirty genes involved in the EGF receptor signaling pathway [7-11]. Genetic suppressor screening in different model organisms led to identification of genes functioning in the same signaling pathway. Thus, diverse species including vertebrates can become objectives for suppressor screenings although genetic suppressor screenings in vertebrates require a lot more labors and large facilities than those in invertebrates.

A chemical compound screening can be adopted to a genetic suppressor screening. A screening for chemical suppressors of the zebrafish mutation gridlock (grl) is an example of a chemical suppressor screening of genetic mutation in a vertebrate model [12]. The grl mutation disturbs aortic blood flow in a region and mimics aortic coarctation in humans. Screening for chemical suppressors of grl identified compounds that suppress the coarctation phenotype through upregulating the expression of vascular endothelial growth factor (VEGF). This exemplifies the combination of a genetic mutation and pharmacological suppressions. However, maintenance of recessive mutant animals and genotyping still demand unfamiliar efforts to non-specialists. Also, a targeted mutation does not always show a characteristic phenotype because of redundancy by existence of family genes. In such cases, multiple gene disruptions are required for making a phenotype visible. In most cases, chemical-based methods should overcome issues of redundancy by suppressing family protein functions through binding to critical structures conserved among the families. If a chemically induced phenotype can be suppressed by another compound, a chemical suppressor will be identified with only compounds and wild type animals but without mutant lines which demand genotyping and large-scale animal facilities. A chemical suppressor screening for chemically activated Wnt/β-catenin pathway identified inhibitors of AKT, telomerase, or geranyl geranyl transferase that are signaling regulators of the pathway [4]. This chemical suppressor screening may provide opportunities for phenotype-based screening to small-scale laboratories interested in chemical biology and compound screenings. Genetic or pharmacological suppressions of a signaling lead to identification of genes or chemical compounds that compensate the induced phenotypes by initiating alterations (Figure 1). 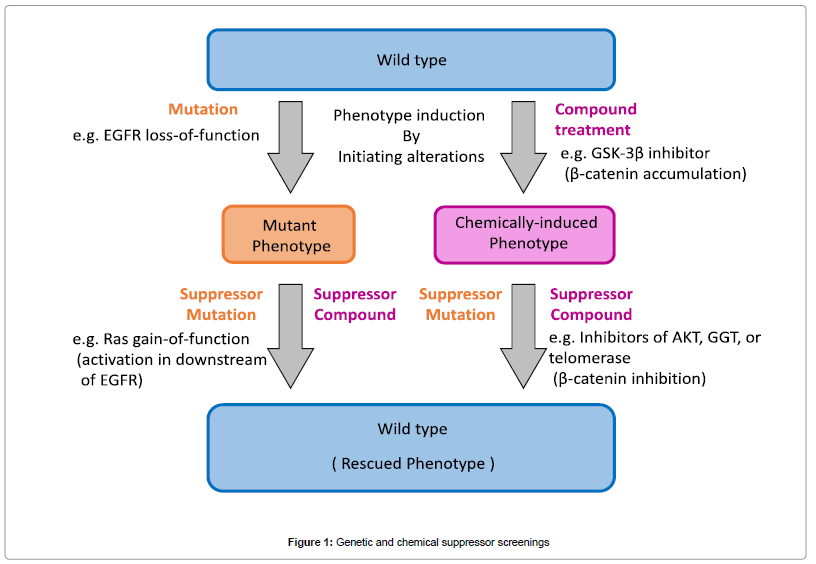 An enhancer mutation can be defined as a second mutation that intensifies the phenotype caused by the first mutation. Enhancement may result from various types of genetic interactions. For instance, two genes may function redundantly. Otherwise, mutations in two genes that are both required for the same function. Genes encoding either components of a protein complex or proteins responsible for sequential steps in a signal transduction pathway or in a biosynthesis pathway are examples. In such cases, the homologous double mutant may exhibit a much stronger phenotype than either single mutant. Enhancer gene screenings in Drosophila receptor tyrosine kinase signaling identified genes for Ras1, a downstream GTPase, Sos, a guanine nucleotide exchange factor for Ras1 [13], and Drk, an SH3-SH2-SH3 adaptor for Sos [14].

By utilizing analogy to genetic enhancer screening, chemical enhancer screenings can be performed (Figure 2). Difference between genetics and chemical genetics is ease of dosage manipulation. In vertebrate genetics, dosage manipulations are usually achieved by choosing homozygotes or heterozygotes. Heterozygotes are not always the best dosage for the enhancer screening. However, pharmacological methods theoretically allow unrestricted dosage controls. Chemical enhancements may be well known phenomena as synergistic effects of medicines. A good example is synergy between sulfamethoxazole and trimethoprim that is used in the treatment of bacterial, fungal, and protozoan infections [15]. The combination of sulfamethoxazole and trimethoprim shows much greater effect than when given separately, because they inhibit sequential steps in the folate synthesis pathway. Thus, chemical enhancer screenings may identify synergistic compounds to existing drugs, and may expand therapeutic targets 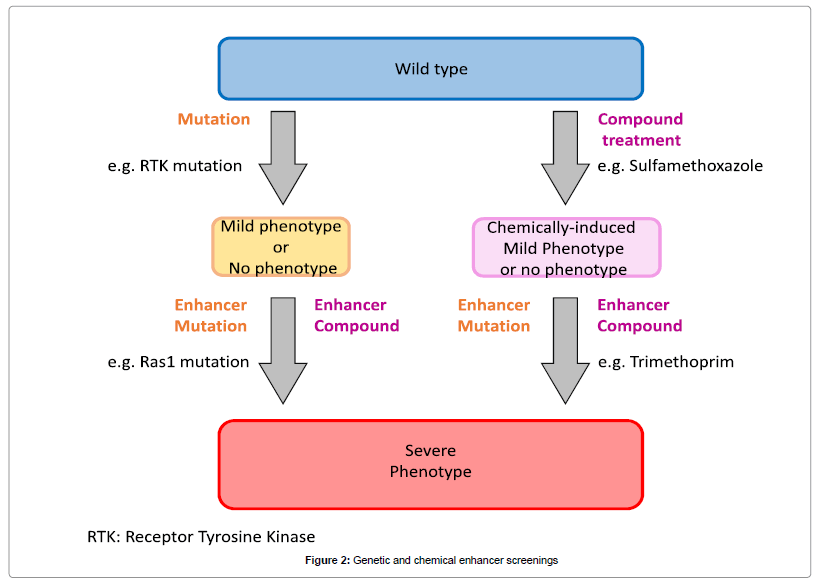 Chemical modifier screenings are phenotype-based assays that may expand therapeutic targets to unexpected molecules and that facilitate identification of target signaling pathways. However, the obtained results from the chemical genetic screening have to be carefully interpreted because unexpected drug-drug interactions, such as effects on absorption and metabolism, may occur. Also, off-target effects have to be considered. On the other hand, off-target effects can lead to discoveries of new target molecules for medication by identifying unknown binding molecules. Whole animal screening may become a powerful method to select less toxic compounds from “safety unknown” chemical libraries. Chemical modifier screening with vertebrates, such as zebrafish, can be applied to prediction system of potential drugdrug interactions that enhance adverse effects. Especially, chemical enhancer screenings are promising for this purpose.

Copyright: © 2014 Nishiya N. This is an open-access article distributed under the terms of the Creative Commons Attribution License, which permits unrestricted use, distribution, and reproduction in any medium, provided the original author and source are credited.
Top