The low quality gemstones need suitable treatment for its quality enhancement before being marketable. Hence, a detail characterization is essential to assess the quality of a particular gemstone. In this context, low grade emerald from Baripada, Odisha is characterized for its physical and chemical properties by various characterization techniques to provide strategy to improve its quality. Optical microscopic and XRD studies reveal the presence of mineral (silicate and oxide) impurities in emerald. FTIR, micro-Raman, micro CT, UV-Visible DRS and Photoluminescence techniques are used to characterize the emerald. ICP-OES is used to quantify the impurities such as Fe, Cr, V, Co, Ni etc in the sample.

Beryl is a group consists of five gemstones of different color. Out of five, emerald is the most important one and is the third most valuable gemstone after diamond and ruby. Though it occurs in many countries of world, Columbia supplies most of the world’s emerald. The green color of emerald is due to trace amounts of chromium and/or vanadium replacing aluminum at the y site. Beryl is relatively rare because of very little Be in the upper continental crust [1]. Unusual geological and geochemical conditions are required for Be and Cr and/or V to be present. It is a general belief that Be bearing pegmatite interacts with Cr-bearing mafic/ultramafic rocks. However, looking at the emerald deposits world over, it is observed that a combination of mechanisms (magmatic, hydrothermal and metamorphic) are required to bring Be into contact with the chromophores.

Gemstones are mainly used in jewelry for ornamental and astrological purposes. Therefore, demand for gemstones is increasing day by day. Gemstones have limited occurrences in India and other parts of the world. Gemstones from various part of world vary in their quality due to differences in geological milieu in which they are formed. Availability of good quality gemstones is scarce in India in general and Odisha in particular. The low quality gemstones need quality enhancement by different techniques before being marketable. Hence, a detail characterization is essential to assess the quality of a particular gemstone.

In India, emerald was first discovered in Rajasthan in 1943. Emerald bearing veins occur at the contact between pegmatite and talc schist. In 1995, emerald was discovered from Tamil Nadu. The emerald is Cr-dominant and occurs in a mica schist belt [2]. Emerald has been reported for the first time from a narrow zone of talc-tremolite schist in Mayurbanja district, Odisha.

The emerald mineralization area is confined to 22° 15’00″ to 22° 20’00″ N: 86° 30’00″ to 86° 39’25″E and belongs to Toposheet No 73 J/11 of Survey of India. The mineralized area is, 40 km from Baripada, and around 260 kms from the state capital, Bhubaneswar. The area is located to the south of Singhbhum shear zone and forms a part of Singhbhum-North Orissa Craton of Eastern India shield. The rocks of the area belonging to Iron Ore Super group of Precambrian age overly the older metamorphics. This paper gives an account of the optical and spectroscopic characterization of low grade emerald that will help to adopt suitable techniques for value addition.

Emerald samples were collected from Bangiriposi area around 40 km from Baripada, Mayurbhanj district, Odisha. Pocket deposits spread over around 20 km2. Pits are dug at Ghasabani, Jharguda, Kairakocha, Saraskona areas in and around Bangiriposi. The emerald grains are embedded in host rocks such as Talc-Tremolite schist, Talc schist and metamorphosed ultramafic rocks. Emerald bearing rock samples were collected from the pits. The emerald grains are small in size and impure. They were separated from the host rock by size reduction, followed by washing and heavy liquid separation. These separated grains were characterized by using a combination of optical microscopy (Leica), XRD and spectroscopic methods such as FTIR, Raman, UV-DRS and PL. To indentify various inorganic phases in the sample X-ray power diffractometer (XRD) of X PERT’ PRO PANalytical, Netherland was used. It is equipped with CuKα1 radiation having 0.154056 nm wavelength and diffractometer was operated at 40 KV and 30 mA. Diffractogram was recorded in the 2θ range from 10° to 80°. For the identification of functional groups present in the emerald sample, Fourier Transform Infrared (FTIR) spectrometer was used to record the spectra from 400 to 4000 cm-1 by using Perkin Elmer Spectrophotometer (model: Spectrum Gx). KBr was used as reference. Raman Spectra of the sample were recorded from 200 to 3000 cm-1 by using dispersive type micro-Raman spectrometer (renishaw inVia spectrometer UK). The sample was ground to have the average particle size of ~10 μm. Absorbance spectrum was made with UV-visible spectrophotometer (Perkin Elmer Lambda 9) between 300 and 800 nm wavelengths. The photoluminescence spectra of sample were obtained with help of Fluoromax 4P Spectrofluorometer. Trace elements such as Fe,V,Cr, Ni etc. are analyzedby ICP-OES techniques (Perkin Elmer OPTIMA 2100DV) after triacid digestion.

Representative rock samples covering all the lithounits of the area were collected. It is observed that talc-tremolite schist is the most important host rock where appreciable amount of tiny emerald grains are present in a haphazard manner (Figure 1a). Megascopic picture of emerald stones separated out from the rock is shown in Figure 1b. It shows emerald stones have different shape and size, majority of them have size below 1 cm. Shape varies from anhedral to subhedral. However, few well developed stones are also present. Its colour varies from dull green to dark green. The refractive index and specific gravity of the emerald stones are found to be 1.57 (ε) to 1.58 (o) and 2.75 respectively. 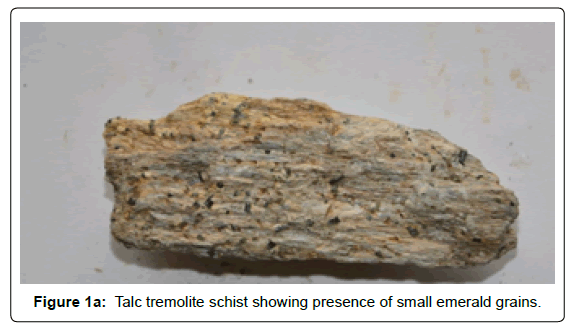 Figure 1b: Megascopic picture of emerald stones separated out from the rock.

The thin section study of the emerald stones indicates that stones have low birefringence and first order light green to light yellow interference color. Polished sections are examined under monochromatic light to decipher the mineralogical attributes of emerald. Figure 2 is a talctremolite schistose rock having well developed rhombohedral and hexagonal emerald crystals. Figure 3 shows presence of magnetite (bright) and silicate (Grey) in the emerald sample as impurities. A few chromite grains are also found to be present. The chromite grains are mostly altered at grain boundaries to ferritchromite (Figure 4). Chemical analysis by FE-SEM indicates that the chromite grains are in fact chromian magnetite. The gemological microscopic pictures of emerald stones are depicted in Figure 5. It shows the distinct green carried out to find out the shape and size of the impurities and their spatial distribution in emerald sample. From the Figure 6, it is observed that the impurities are of irregular shape and size and show a definite pattern of distribution in the sample. 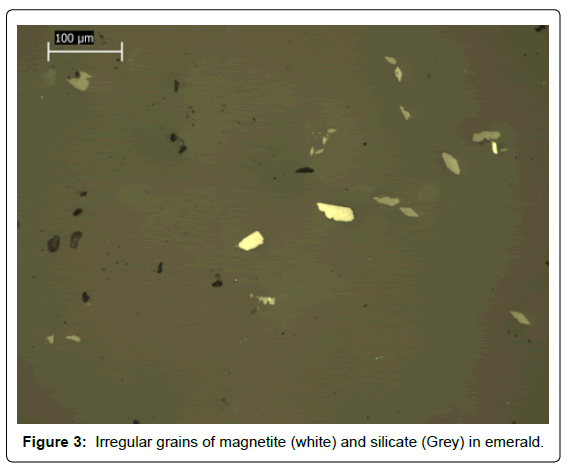 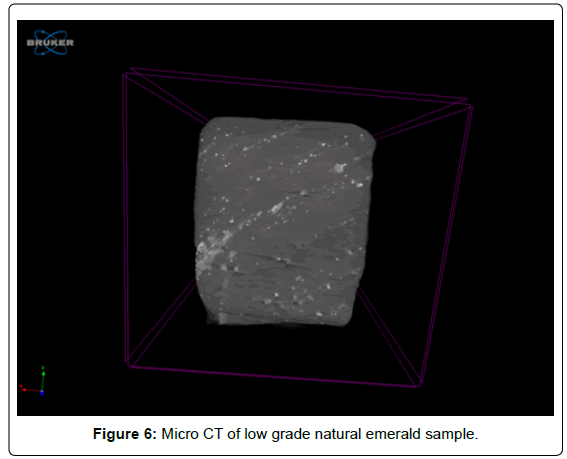 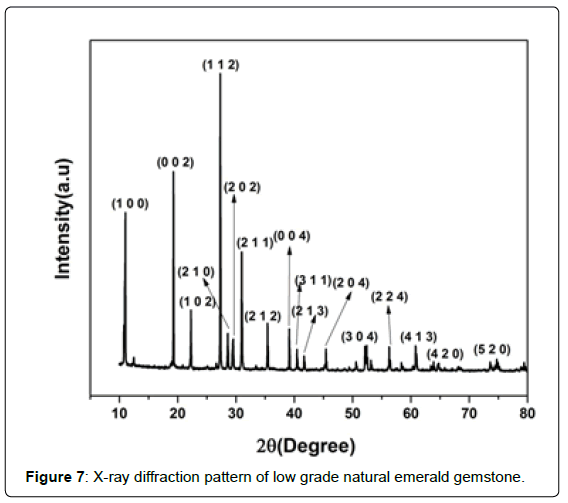 Emerald has hexagonal structure and its lattice parameters are calculated from the diffraction pattern using following equation.

The obtained lattice parameter values are a=9.258 Å and c=9.152 Å and these values are in good agreement with the literature [3]. The c/a ratio (0.98) very well matches with the ICSD pattern value (0.99). It indicates that emerald sample belongs to the tetrahedral series [4]. For further confirmation of phase, Raman spectrum is obtained and it is depicted in Figure 8. It shows various Raman bands which are given in Table 1 along with their spectral assignments. The characteristic vibrational modes for Be-O and Si-O, Al-O, Al-O-Si are observed which support the emerald mineral phase. Bands due to moisture and hydroxyl groups are also noticed and this observation is well supported by the following FTIR results. 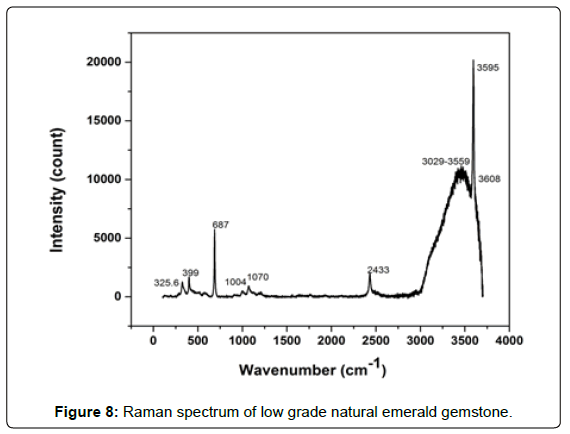 In order to know the different functional groups present in the low grade emerald sample, FTIR spectra are recorded from 400 to 4000 cm-1 and shown in Figures 9a and 9b. It shows many absorption bands at different wavenumbers. The spectral assignments of all the bands are given in Table 2. Among all bands, the bands observed for Si-O-Al, Be-O and Si-O vibrations are providing evidence for emerald phase. Further, it also provides the information about physically adsorbed water molecule and also hydroxyl groups associated with lattice. 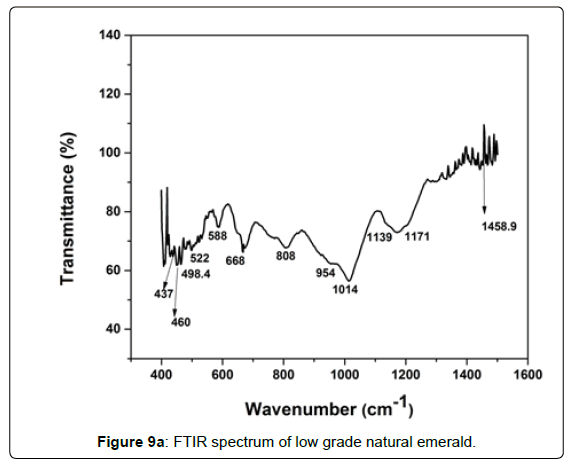 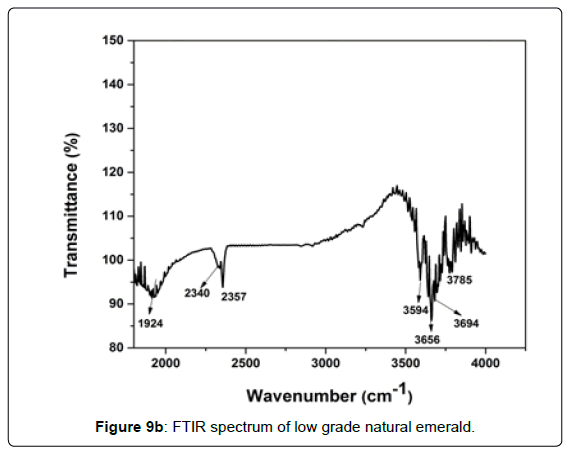 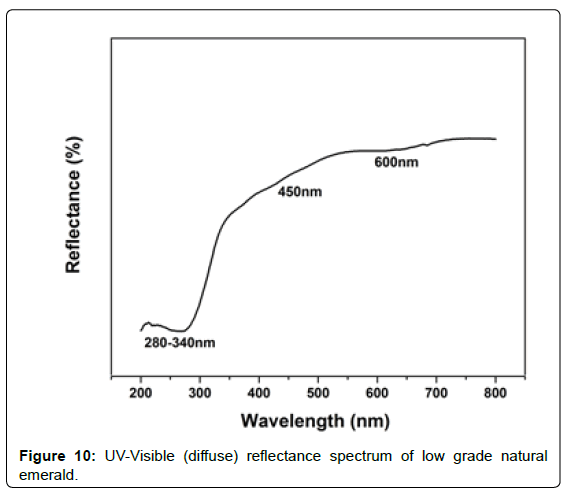 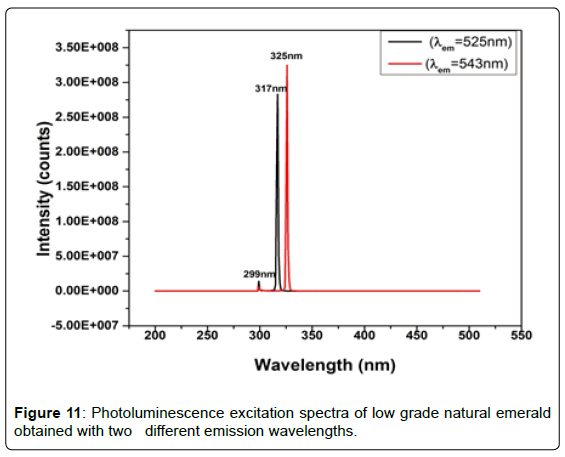 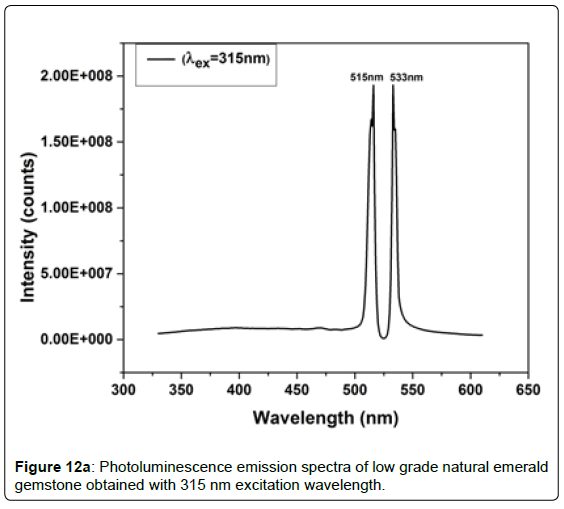 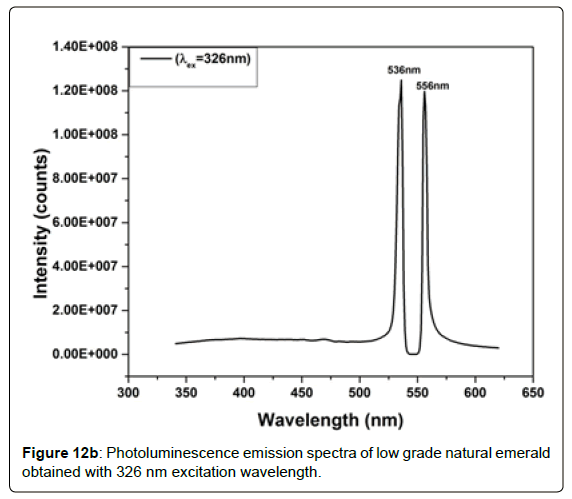 From the above characterization results, it is concluded that emerald sample collected from the field is a low quality one with a lot of impurities. Optical microscopic study reveals mineral (silicate and oxide) impurities. X-ray powder diffraction study reveals it contains emerald as the major phase with minor amounts of feldspar and magnetite/chromian magnetite phase. FTIR spectrum shows characteristic vibration modes for Si-O-Si, Al-O-Si, stretching and bending mode for hydroxyl groups present in the sample. In addition, spectrum provides the presence of physically adsorbed water molecules in the sample. Laser Raman spectroscopic study support the findings of XRD and FTIR characterization. UV-Visible diffuse reflectance spectrum shows prominent absorption band at 500 and 320 nm wavelength. Photoluminescence study shows doublet emission bands between 510 and 550 nm wavelengths. This emission band position shifts with different excitation wavelengths. Emission behavior of low grade emerald is attributed to the impurities present in the sample. Distribution of mineral impurities in the emerald grain is observed by micro CT. The above studies give an idea about mineralogical as well as chemical characteristics of the low grade emerald which provides the scope to enhance its quality by adopting suitable purification strategy.

The authors express their sincere thanks to Director, CSIR-IMMT, Bhubaneswar for his keen interest in the work and permission to publish the paper. Sincere thanks are due to colleagues who have helped in various instrumental analyses for this study. We also acknowledge the Council of Scientific and Industrial Research, New Delhi for financial support.

Copyright: © 2016 Reshma B, et al. This is an open-access article distributed under the terms of the Creative Commons Attribution License, which permits unrestricted use, distribution, and reproduction in any medium, provided the original author and source are credited.
Top