Introduction: Carbon-ion radiotherapy (C-ion RT) is known as a highly effective local treatment and its relative biological effectiveness (RBE) has been evaluated for various types of malignant tumors. There are only a few studies on C-ion radio sensitivity in breast cancer, and there has been no evaluation by subtypes. To estimate the impact of C-ion RT for breast cancer, RBE of C-ion beams of various types of human breast cancer cell lines was evaluated by comparison with X-rays.

Results: CFA was not suitable for BT474, SK-BR-3, MDA-MB-468, and HCC1937 because of their low plating efficiency. The differences between the D10 values on HDS were large with X-ray, and the survival curve shoulders for MCF7, MDA-MB-468, and MCF10DCIS.com were wide. On the other hand, the differences between the D10 values were small with C-ion beams, and the survival curves were linear without shoulders for all cell lines except a small shoulder with MCF10DCIS.com. The RBE value of C-ion beams was 2.3 to 3.6, median 2.9 in all cell lines by CFA and HDS.

Conclusion: RBE around 3 by C-ion beams was seen in many types of ductal cancer. The small survival curve shoulder on MCF10DCIS.com suggested that non invasive ductal carcinoma is relatively more resistant than invasive cancer.

Radiotherapy with X-rays plays an important role in the treatment of breast cancer for breast irradiation of breast-conserving therapy, post-mastectomy regional radiotherapy, and recurrent tumor radiotherapy. However, the treatment effects are limited, as the local control rate is attenuated by post-operative micro residual tumor cells. If more effective radiotherapy would be available, its role would rise in importance.

Carbon-ion radiotherapy (C-ion RT), one of the types of heavy particle radiotherapy, with high biological effect and good dose distribution, has been reported to be effective for locally advanced tumor and radio resistant tumor [1]. Good dose distribution has the potential to cure tumors without problematic adverse effects on surrounding normal tissue. Relative biological effectiveness (RBE), which is the effective ratio compared to photon, reportedly about 3, is also advantageous compared to proton with RBE of about 1.1 [2]. The National Institute of Radiological Sciences (NIRS) has been carrying out C-ion RT using the Heavy Ion Medical Accelerator in Chiba (HIMAC) since 1994, treating more than 8000 various malignant tumors that had been considered difficult to treat by conventional therapy [3]. NIRS has reported good local control with C-ion RT in adenocarcinoma, melanoma and sarcoma, known radio resistant tumors. C-ion RT facilities in other countries have also reported good results [3]. The usefulness of C-ion RT has been recognized, and the number of C-ion RT facilities has been gradually increasing throughout the world. In most of those countries, breast cancer is the most common cancer among women.

Breast cancer had not been considered a good candidate for C-ion RT because of the increased skin dose in both whole breast and regional irradiation. Also, relatively better treatment results had already been obtained in early-stage tumor with breast-conserving therapy combined with systemic therapy [4]. However, in recent years, breast-conserving therapy for certain types of early breast cancer could be carried out without whole breast irradiation, and sufficient control can be obtained by partial breast irradiation to the tumor bed following lumpectomy. In the concept of partial breast irradiation, as the radiation field contains a relatively small amount of normal tissue, radiotherapy can be conducted within a few days without consideration of adverse effects on normal tissue. Therefore, accelerated partial breast irradiation (APBI) can usually be performed within 5 days. In European countries and the United States, breast-conserving surgery with APBI is a part of clinical practice for patients with low risk factors. According to the consensus guidelines of the American Society for Radiation Oncology (ASTRO), patients aged 60 years or older, less than 2-cm solitary primary tumor, no axillary lymph node metastasis, estrogen receptor (ER) positive, human epidermal growth factor receptor 2 (HER2) negative, invasive ductal carcinoma, or common type histology are good candidates for APBI [5]. The proportion of good candidates for APBI is about 15% of all breast cancer patients, some 9000 patients per year in Japan.

Particle radiotherapy application for breast cancer has been reported from only a few facilities, using post-operative proton radiotherapy to the tumor bed as APBI or whole breast irradiation [6-8]. Even though Japan has thirteen particle therapy facilities, no study of breast cancer has been reported except from our institute. In respect to the higher anti-tumor effect than photon on other malignant tumors including radio resistant tumor, as well as our experience with metastatic breast cancer, C-ion RT for primary breast tumor is considered to be satisfactory in comparison with X-ray irradiation. Therefore, our institute has conducted radical radiotherapy of APBI with C-ion RT without lumpectomy. Radical C-ion RT of breast tumor will be able to deliver a lower physical burden of treatment, higher quality of life, and a cosmetic outcome compared with standard breast-conserving therapy. The Research Center for Charged Particle Therapy of NIRS had been preparing the clinical application of C-ion RT for low-risk stage I breast cancer since 2011. The breast cancer clinical research committee designed the protocol for clinical trials of C-ion RT for low-risk stage I breast cancer, and started the protocol treatment from May 2013 [9]. 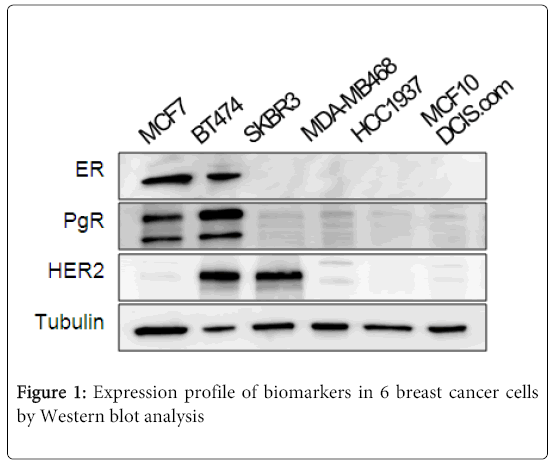 After irradiation, cells were immediately rinsed with phosphate-buffered saline (PBS) (Nissui) and detached with 0.1% trypsin (Gibco). The cell densities were counted with a hematocytometer, and plated onto 150-mm, 100-mm or 60-mm diameter plastic dishes. Colonies were fixed and stained with 1% methylene blue in 30% methanol after a 7-14-day incubation period, the period fitting the respective cell lines for colony formation. Colonies consisting of more than 50 cells were scored as surviving colonies. The plating efficiencies for colony formation on a plastic dish ranged from 0% to 44% in each cell line.

The HDS assay was carried out as described by Kuwahara et al. with a modification [11,12]. Briefly, cells with about 50 to 60% confluence were irradiated, and the cells were kept in culture for another 3 days. Cells of each flask were then trypsinized and 1/8 of cells for MCF-7, BT-474, SK-BR-3, MDA-MB-468, HCC1937, or 1/24 of cells for MCF10DCIS were plated onto new T25 flasks and subcultured for a further 5 days. The number of cells was counted with a hematocytometer at 8 days after exposure to radiation.

Expression profiles of ER, PgR and HER2

Expressions of ER, PgR and HER2 in 6 breast cancer cell lines were confirmed by Western blotting (Figure 1), and the data are summarized in Table 1.

Plating efficiency (PE) of MCF-7, SK-BR-3, MDA-MB-468 and MCF10DCIS.com was 29, 15, 5.8 and 48%, respectively (Table 2). Countable colonies were not formed in BT474 and HCC1939, thus cell-survival curves by CFA were unable to be determined for those cell lines. Colonies were formed for SK-BR-3 and MDA-MB-468, colonies were formed, but the data were not stable within repeated assessments, because of their low PE.

Table 2: Summary of D10 and RBE of each cell line Dose-response and RBE values of cells It is well known that CFA is a cell-survival assay that determines the ability of a single cell to grow into a colony [13]. However, the CFA method is not suitable for determining the surviving ability of cells, which require cell-cell interaction to survive. Prior to the experiment, low PE of breast cancer cells on CFA was not expected. The breast cancer cell lines used in our series had lower PE compared with other cancer cell lines. PE of about 90% was previously reported in colon cancer and pancreatic cancer cell lines [14,15], but in the six breast cancer cell lines, the highest PE was the 48% of MCF10DCIS.com, and BT474 and HCC1939 did not form countable colonies. The cell lines with higher PE, MCF10DCIS.com and MCF-7 (30% PE) showed good reproducible data. On the other hand, the 6% PE of MDA-MB-468 and 15% of SK-BR-3 indicated instability, and no dose-dependency could be confirmed, even with repeated examinations.

The MTT cell proliferation assay was then performed. This assay is a colorimetric method to measure the enzymatic activity that is reduced to formazan purple pigment in vivo. Cells are usually seeded quite thinly for a small volume in 96-well plates when using the MTT assay, but breast cancer cells could not grow under this condition. When we seeded cells with enough density to grow, the well became full immediately and the growth curve reached a plateau, meaning that we could not obtain a growth curve with this assay. This behavior is not seen in the usual passage, meaning that some breast cancer cells need surrounding cells to survive. It was thought that the cause of low PE was low cell density.

We had searched for other assays that could evaluate radio sensitivity in a manner similar to the usual culture, and we found articles on HDS, reportedly effective for evaluating the radiosensitivity of cell lines with low PE [11,12].

In the beginning, we tried this assay for MCF-7, for which we had already obtained proper data with CFA, and obtained data that correlated with CFA with good reproducibility. HDS uses a T25 flask and reseed in mid-flow, and this type of assay matches cells such as breast cancer, with cell density affecting cell growth. We were able to obtain stable data of radio sensitivity of BT474, SK-BR-3, HCC1937, and MDA-MB-486 by HDS, although they were not obtainable by CFA. However, the RBE values of 2.3 with MCF10DCIS.com (DCIS) by CFA and 2.6 by HDS may show some differences between CFA and HDS.

By comparing the RBE values of the respective cell lines by HDS assay, it is suggested that MCF10DCIS.com would be relatively resistant compared to the other cells. In addition, MCF10DCIS.com cells indicated a small survival curve shoulder by C-ion irradiation, suggesting the existence of some cell-specific properties affecting cell growth or death. The differences between CFA and HDS were considered to be caused by the communication of cells surrounding cancer cells, as the surrounding cells might possibly affect the survival of cells. We think that a cell-dense condition similar to real tumor by HDS was able to increase the potential for a high reliability of the results.

RBE values of 2.4 with BT474 (Luminal-HER2-positive) and 3.3 with HCC1937 (Basal-like) were only available by HDS. Although the RBE value of BT474 was smaller than that of HCC1937, however, we could not conclude that the radio sensitivity of Luminal-HER2 positive type was less than that of the other type.

The RBE values of C-ions have been extensively examined by various researchers and totally reviewed in the article by Ando et al. [16]. They reviewed 54 papers presenting 506 RBE values. They summarized that the LET of C-ions was distributed between 11 and 500 keV/μm, and RBE ranged from 0.2 to 9.6, with mean and standard deviation of 2.22 and 1.20, respectively. A peak of RBE values was found at around 80-200 keV/μm. Relatively high RBE values were reported in malignant melanoma, uterine cancer, brain tumor and fibroblast, while low values were reported in hepatoma and salivary gland tumor. Friedrich et al. systematically analyzed RBE and related quantities using a database of cell-survival experiments.

As the report of other adenocarcinoma cell lines, Suzuki et al. reported an RBE value of 2.37 of lung cancer cell (A-549) [15]. Other adenocarcinomas of prostate, rectum, lung, uterus and hepatocellular carcinoma were reported with similar RBE values and better clinical treatment results than with conventional photon irradiation at NIRS.

Copyright: © 2014 Karasawa K, et al. This is an open-access article distributed under the terms of the Creative Commons Attribution License, which permits unrestricted use, distribution, and reproduction in any medium, provided the original author and source are credited.
Top