Base Catalyzed Glycerolysis of Ethyl Acetate

Base Catalyzed Glycerolysis of Ethyl Acetate

Glycerol is a simple polyol compound widely used as a green solvent, having backbone to all lipids known as triglycerides. In our present study, we used glycerol as an acyl acceptor for transesterification of aliphatic acetate by conventional and using microwave assisted synthesis. It was found that increase in the concentration of substrate and catalysts with reaction time, increases yield of aliphatic alcohols. The reaction was followed by separation of product from glycerol by simple extraction with diethyl ether and studied for their HPLC and GC analysis.

The hydrolysis of esters is a basic organic transformation [1]. Traditionally, the reaction is performed in an acidic or basic aqueous solution under mild conditions yielding the corresponding carboxylic acid and alcohol. Alternatively, due to low miscibility of most esters in water and since acidic or basic conditions lead to equipment corrosion, catalytic transesterification of ester in the presence of an alcohol that removes the carboxylic group from the ester and releases the corresponding alcohol (alcoholysis) was also extensively studied. The alcoholysis of ester is an equilibrium reaction, which usually requires excess amounts of alcohol to yield high conversion, and the presence of catalyst that can be either homogenous or heterogeneous [2-5]. Solid acids and bases as well as immobilized lipase are often employed for this purpose as they have the advantage of being easily separated from the reaction mixture, recycled and reused. Reactions of alcohols with ethyl acetate (transesterification) and propylene oxide were investigated by use of a variety of solid base catalysts to elucidate the activity determining factors of the catalyst in relation with type of alcohol. Solid base catalysts examined were alkaline earth oxides, hydroxides, and carbonates, alumina supported KF and KOH, rare earth oxide, zirconium oxide, etc. Reaction rate of the alcoholysis of ethyl acetate varies with the combination of type of alcohol and basic strength of solid base catalyst [6,7]. Over strongly basic catalysts such as CaO, SrO, BaO, 2-propanol reacted much faster than methanol. On the other hand, over weakly basic catalysts such as alkaline earth hydroxides, methanol reacted faster than 2-propanol. 2-Methyl-2- propanol reacted only over strongly basic catalysts, and much slower than methanol and 2-propanol. Alcoholysis with propylene oxide was catalyzed only by strongly basic catalysts such as alkaline earth oxides, and KF/alumina, alkaline earth hydroxides scarcely showed activity [8]. γ-Alumina, however, showed a high activity, though the selectivity of products was different from those for alkaline earth oxides. Reactives of alcohols with propylene oxide were in the order, methanol>ethanol>2-propanol>2-methyl-2-propanol, regardless of the type of catalyst. One of the characteristic features observed for both alcoholyses is that the catalysts are tolerant to air exposure, which is caused by strong absorptivity of alcohol competitive to that of carbon dioxide and water [9-11]. In this paper, we report on our study about the glycerolysis of aliphatic acetate, using sodium hydroxide and magnesia as representative soluble and solid base catalysts, using glycerol as a green solvent and as an acyl acceptor (Figure 1). The effects of reaction conditions and catalyst type and loading on aliphatic alcohol yield were studied. In addition, product separation procedure and catalyst recycling were also examined. 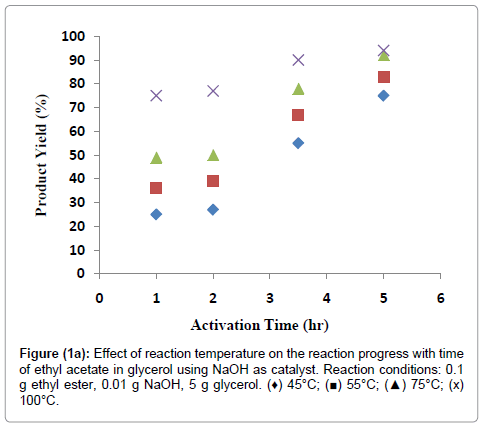 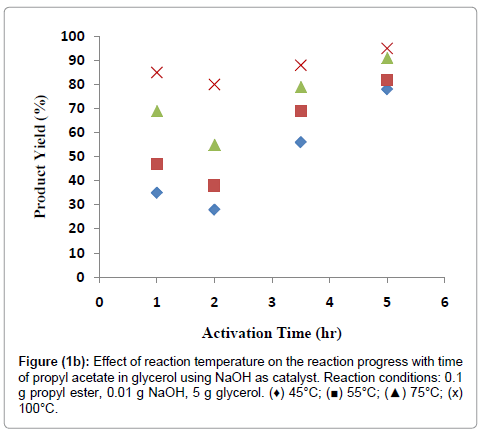 In a typical procedure, 0.1 g of ethyl acetate was added together with 0.01 g of catalyst to a vial with 5 g of alcohol (all purchased from Merck Pvt. Ltd). The mixture was placed in a preheated oil bath and heated to the required temperature (45-100°C) after which it was magnetically stirred for 1-5 h. At the end of the reaction, the reaction mixture was cooled and extracted with 3×10 mL diethyl ether. The organic phase was concentrated under reduced pressure, and the resulting crude product was analyzed by HPLC and GC analysis using a C-18 and HP-5 column (30 m×0.25 mm, 0.25 μm thick).

Two catalyst recycling methods were tested. The first reaction cycle in both methods was run as follows: 1 g of ethyl acetate and 0.1 g of solid catalyst were added to a vial with 10 g of glycerol. The vial was then heated at 75°C for 1 h. For the first catalyst recycling method, the catalyst was filtrated at the end of the reaction and the product was extracted by 5×10 mL diethyl ether and analyzed by GC. The filtrated catalyst was then added to a fresh mixture of ethyl acetate in glycerol, and the reaction was repeated. For the second method, the product was extracted by 5×10 mL diethyl ether from the glycerol-catalyst mixture without the filtration of the catalyst, to which was added fresh ethyl acetate.

Microwave assisted reactions were conducted at atmospheric pressure in a domestic microwave (800 W) in a vial, which was covered with a watch glass. The substrate was dissolved in 5 g glycerol followed by addition of the catalyst. After the vial was covered with the watch glass, the reaction mixture was heated in the microwave oven at low intensity from 26°C to 56°C for duration of 40 s and at full intensity from 26°C to 61°C for 5 s. At the end of the reaction, the vial was cooled to room temperature in ice, and the reaction mixture was extracted with petroleum ether for HPLC and GC analysis.

The synthesis of aliphatic alcohol is usually produced via synthesis of aliphatic chloride by chlorination of toluene that is then hydrolyzed under alkali conditions [12]. This multistage process includes many steps of separation and purification after the respective reactions. Thus, it is not advantageous economically and environmentally. Moreover, the hydrolysis step requires an excess amount of alkali base resulting in a large amount of a salt solution contaminated with organic compounds that has to be treated. However, aliphatic alcohol can also be produced by oxyacetoxylation from toluene, acetic acid, and oxygen to aliphatic acetate followed by hydrolysis of the ester. As ester alcoholysis can be accomplished using heterogeneous acids and bases and alcohol as an acyl acceptor it is more favored to avoid byproduct salts formation as in aqueous hydrolysis [13]. As previously mentioned, esters can be alcoholized through transesterification using alcohol, which can simultaneously be used as a solvent and as an acyl acceptor, using various homogeneous and heterogeneous catalysts [3-5]. Hence, the investigation began by testing the progress of aliphatic alcohol yield with time in glycerol in several temperatures (Figures 1a and 1b). In general, as expected, increasing the reaction time or temperature in the range of 1-5 h and 45-100°C respectively, increased the product yield. Yet, it can be seen from the results in Figures 1a and 1b that increasing the temperature behind 75°C did not significantly change the product yield. At the end of the reaction, aliphatic acetate was easily separated from the reaction mixture by simple extraction with diethyl ether. As glycerol was used as both a solvent and an acyl acceptor it may yield glycerol monoacetate, glycerol diacetate, and/or triacetin as by-products. However, the high boiling points and high solubilities of these potential by-products in glycerol allow the product to be easily separated from the reaction mixture. Magnesia is commonly used solid base catalyst. It is well known that the basic sites on magnesia surface adsorb oxygen and moister from air that affect catalytic performance. Hence, the effect of pretreatment temperature and time on magnesia performance in the transesterfication of aliphatic acetate was first examined (Figures 2a and 2b). As illustrated in Figures 2a and 2b, both pretreatment time and temperature affect the product yield, and increase in oven temperature decreases the required time to release the adsorbed molecules and activate the basic sites. 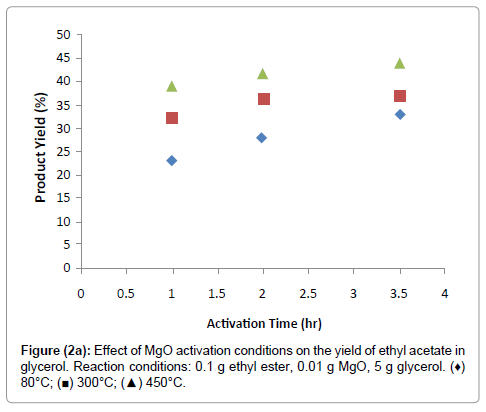 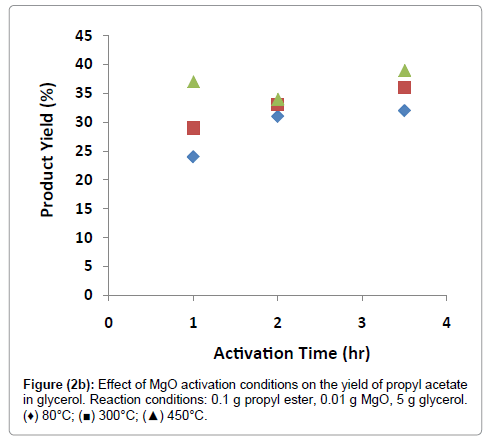 On the surface, Thereby, increasing the product yield. Therefore, based on energy efficiency measurements, the catalyst was preheated at 300°C for 2 h for all subsequent experiments of the study. The progress of aliphatic alcohol yield with time in glycerol in several temperatures was also studied over magnesia (Figures 3a and 3b). As previously detected with NaOH, increasing either the reaction temperature or the reaction time increased the yield of aliphatic alcohol, and again, at temperature above 75°C the effect of temperature was negligible after 2 h. As the active sites of the two representatives’ homogeneous and heterogeneous catalysts are different by strength and amount the comparison of the performance of the two catalysts was done on equal mass basis. It was found that the soluble base is more active than the solid base and using NaOH yielded 37% yield after 1 h at 55°C while employing MgO required. 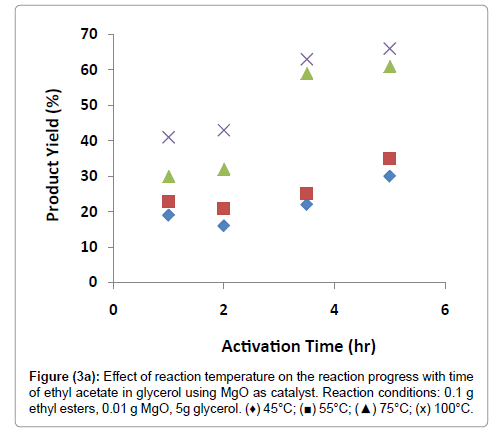 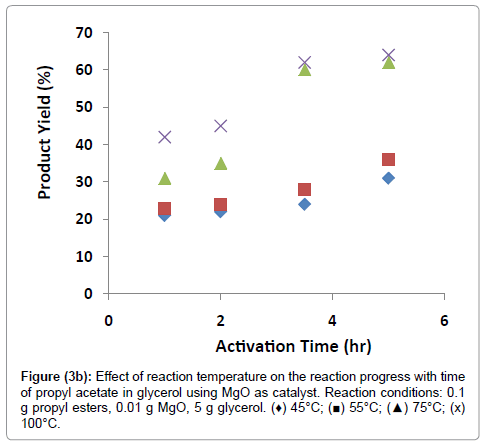 75°C to reach 33% yield after an hour. Yet, though the performance of the soluble base was higher than the solid one, solid catalyst is advantageous from industrial point of view, as it can be easily separated from the reaction mixture by filtration and recycled. Increasing the substrate to catalyst ratio (S/C), by either increasing aliphatic acetate amount or decreasing MgO loading, increased the initial reaction rate, this was calculated by the amount of reacted substrate per g of catalyst divided by reaction time (Figure 4). The recycling of magnesia was also tested using two different methods: running the first reaction cycle and filtration of the catalyst that was subsequently employed in second cycle with fresh. 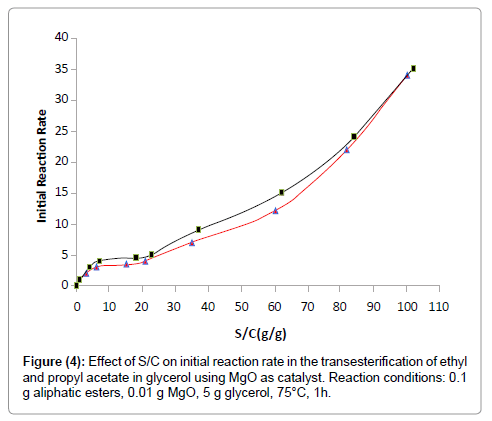 Aliphatic acetate and glycerol, or running the second catalytic cycle by extraction of the product from the glycerol-catalyst mixture without the filtration of the catalyst, to which was added fresh aliphatic acetate. Thus, to test the viability of MgO reuse, the first reaction cycle was run for 1 h at 75°C after which the catalyst was filtrated and the product and the residual substrate were fully extracted by diethyl ether. After the first reaction cycle, the catalyst was filtrated and added to a fresh mixture of aliphatic acetate in glycerol and the reaction was run again under similar conditions. Two cycles of catalyst reuse were done by this method resulting in a small decrease of yield in each cycle, probably due to the catalyst lost during recycling procedure. Since, glycerol was used both as a solvent and an acyl acceptor, recycling of the glycerol together with the heterogeneous catalyst was also tested by extraction of the product and the residual substrate from the glycerol-MgO mixture with diethyl ether followed by the addition of fresh aliphatic acetate. Supporting our previous assumption was the loss of catalyst during filtration was the reason for the decrease in the product yield in the former recycling procedure.

Finally, microwave-promoted heating was recently reported to enhance organic reactions, including the hydrolysis of esters, relative to conventional heating [14]. Thus, using an unmodified home microwave, the transesterification of ethyl acetate in glycerol under microwave irradiation was also tested in an open reaction vessel with MgO as the catalyst. Heating the reaction mixture for up to 40 s at low intensity (from 26°C to 56°C) or for 5 s at high intensity (from 26°C to 61°C) resulted in 23% yield, while under conventional heating at 55°C for 1 h the yield was 27%. It seems that glycerol that has high dielectric constant and three hydroxyl groups adsorbs microwave irradiation efficiently. Furthermore, the markedly low vapor pressure and high boiling temperature of glycerol make it an attractive solvent for microwave-promoted organic synthesis under atmospheric pressure [10].

Glycerol can be successfully used as a green solvent and with this concept we successfully developed an acyl acceptor in the transesterification of ethyl ester to ethyl alcohol by using soluble and solid base. It allowed the conventional heating method to be replaced with the more efficient microwave-promoted heating. The yield of aliphatic alcohol was increased by increasing the reaction time and the temperature while maintaining the loading of the catalyst. Heating the reaction in an unmodified home microwave instead of using conventional heating resulted in higher reaction rate. Transesterification of glycerol mechanism helps to develop efficient separation techniques for product from catalyst and recycling of catalyst.

Copyright: ©2012 Kore PP, et al. This is an open-access article distributed under the terms of the Creative Commons Attribution License, which permits unrestricted use, distribution, and reproduction in any medium, provided the original author and source are credited.