Sungai Batu was located in Sungai Merbok district, which is situated between Sungai Petani and Gunung Jerai. Archaeological evidences such as metal artifacts, remains of furnaces, iron ores, tuyeres and slags has been used since 3rd-5th CE as a famous international entrepot [1]. The evidence of ancient structure and iron smelting with supporting data from geophysical methods show that Sungai Batu is an oldest civilization that has been recorded in Southeast Asia [2].

Mid-south of Kedah was recorded as marine area in the 1st-2nd century. The changes of geomorphology due to rise in sea level in year 1400 changes the area become landed region [3]. Sediments including rocks, soil, and mineral from weathering process was transported from river and ocean to the lower area, and strongly influenced by the regional geology. The sea level fluctuations are about 2-3 m in 200 years or less based on the historical and geological evidence [4]. Regression of sea level during Late Holocene until present day changes the geomorphology for this area. The mechanism of sea level changes is complex and related to the earth’s rheology, eustasy and isostasy [5,6]. The sea level fall was recorded with the value of 0.7 and 0.5 mm/year for Peninsular Malaysia West and East coasts respectively in mid-Holecene to recent sea level trend [7]. Sungai Batu sedimentation process controls by the depositional process from Sungai Merbok and Malacca Strait. Sediments from Gunung Jerai was transported by Sungai Merbok to lower region with high of turbidity current until it settled down due to gravity factor. The hydrogenous sediments from Malacca Strait are transported due to long shore drift from the tidal current to formed range of landforms. There are several factors controlling the depositional environment in this area which is fluvial discharge including water volume, time variation, river mouth process and also tidal process. The sediments from the near shore or marine are well sorted with fine grained distribution due to current velocity and particle diameter [8].

Resistivity value of unconsolidated sediments from Bering Sea was identify with value of 29.1-71.0 Ohm.cm at 25°C and irregularly increase 11 Ohm.cm in the first meter below the sediment surface [9]. A combination of laboratory analysis and multi-electrode resistivity field experiment for marine sediments status confirms that the multielectrode resistivity method is relevant to estimate the degree and state of sediment consolidation in real-time and in-situ [10]. A geophysical surveys, 2D resistivity imaging and seismic refraction tomography were carried out to identify the sediment depositional origin of Sungai Batu.

The study location was situated near river and residential area. The geomorphology of this area was flat landed fill with oil palm and rubber trees including streams, rivers and swamps at the eastern part. Sungai Batu area is located at northwestern of Peninsular Malaysia and near to Gunung Jerai and Sungai Merbok. Sungai Merbok is underlain by Mahang formation especially in eastern and southern part [11]. The formation formed in Middle Ordovician to Early Devonian age [12]. The rock unit comprises shale, red slate, grey slate and black slate. Hot and humid climate during a year leads the high chemical weathering to occurs, which changes the shale to soil and laterite [13]. The main mineralogy of rocks is mica and chloride. Black slate contains an abundance of carbon and red slate, consists of high iron oxide [14]. Granitic intrusion causes the rocks of surroundings area become metamorphose to produce schist rocks [12]. Gunung Jerai located at the northern part of study area which recorded as highest mountain and consist of rock cockerel, made of schist rocks with a few layers of quartzite (Figure 1). The depth of penetration is also depending on k value. For this survey, Pole-dipole array was used based on the deepest depth penetration beside provides a good resolution. Pole-dipole array is an asymmetrical arrangement which influence the anomalies by giving asymmetrical apparent resistivity. To eliminate the asymmetry affect, reverse measurement also taken (Figure 2). 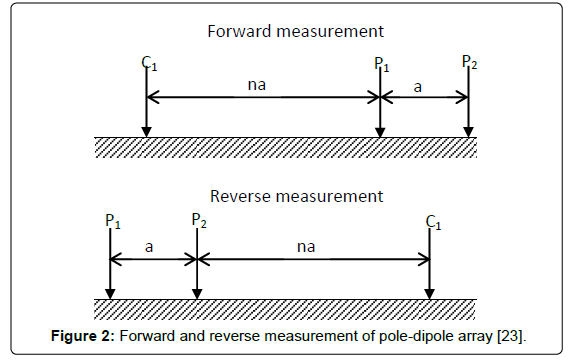 Seismic refraction tomography is based on determination of time interval that elapses between an initiation of a seismic waves at a certain shot point and the arrival of refracted waves at one or more seismic detector (Figure 3). Seismic refraction tomography uses a wave’s propagation in ground surface which is dependent on the velocity variation in difference medium [18]. The wave return to the surface as refracted waves which are sometimes called head waves [19]. 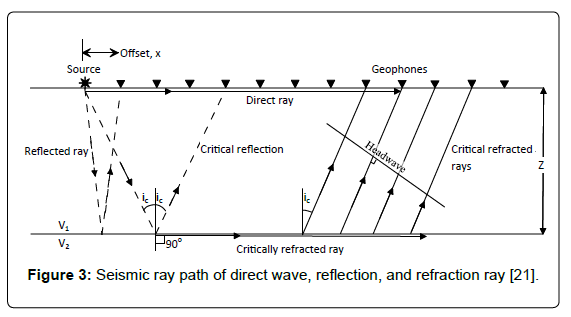 Seismic waves propagate with different velocity when travelling in different geological layer and refracted when they crosses a boundary between different type of geological layer. The thickness and velocity of material above and below an interface can be calculate by determining the arrival times for direct and refracted waves from seismic section. Table 2 shows seismic velocity value varies with mineral content, lithology, porosity, density and degree of compaction [20]. Seismic refraction tomography survey used one unit of ABEM MK8 seismograph, seismic cable with 24 take-out and 24 units of 28 Hz vertical geophones which planted on the ground at 5 m constant geophone spacing. Seismograph setting for data acquisition for line L1 and L2 on site 1 and 2 are the same (Table 4). 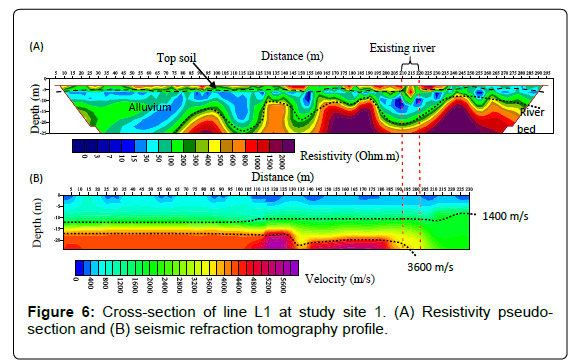 Copyright: © 2016 Saad R, et al. This is an open-access article distributed under the terms of the Creative Commons Attribution License, which permits unrestricted use, distribution, and reproduction in any medium, provided the original author and source are credited.
Top