Aim: The purpose of this retrospective study was to examine the clinical outcomes of anatomic single-bundle ACL reconstruction using a free Quadriceps (QUADRI) tendon or a quadrupled Hamstring (HAM) autograft.

Results: In the present study, ten people received Quadriceps (QUADRI) grafts and 35 received Hamstring (HAM) grafts. The demographic data for the groups were extremely comparable. The mean follow-up length for the HAM group was 11.96 ± 0.28 months, while the QUADRI group had a mean follow-up period of 11.25 ± 0.43 months. No significant variations in the Cincinnati Score were observed between the two groups during any of the treatment's follow-up periods. Similarly, the Tegner Lysholm Score revealed no statistically significant differences between the HAM and QUADRI groups at all follow-up visits, except for the sixth week.

The Hamstring tendon autograft is the most often used autograft for ACL reconstruction, followed by Bone-patellar Tendon-Bone (BTB) autograft [1]. Both graft approaches have advantages and disadvantages, as there is no conclusive proof that one is preferable to the other [2]. However, in terms of graftrelated morbidity, HAM grafts are recognised to cause fewer donors site morbidity than BTB grafts [3-6].

Recently, interest in using Quadriceps tendon (QUADRI) as an autologous graft for ACL reconstruction has established. This increased interest could be attributed to the advancement of graft harvesting procedures, which have resulted in the introduction of less invasive treatments using smaller incisions [7]. However, despite the fact that the QUADRI as a graft has been used for ACL reconstruction for a lengthy period of time and with positive results, it is still regarded a secondary alternative for primary ACL reconstruction [8]. Several studies indicate that donor site morbidity is significantly lower following QUADRI-ACL surgery than following BTB-ACL reconstruction [9]. Additionally, donor site morbidity was found to be significantly lower for the free Quadriceps transplant without a patellar bone block than for HAM graft harvest [7,10].

Additionally, significant conceptual advantages of QUADRI autografts include their consistent size, their adaptability, and the capacity to harvest grafts in a variety of widths, thicknesses, and lengths. Additionally, graft maturity was found to be superior at six months following ACL reconstruction using QUADRI versus HAM autograft [8,11]. However, this study used a bone-QUADRI graft. However, there is a dearth of data comparing the clinical results of patients who underwent ACL repair using a free QUADRI or HAM autograft [11]. The goal of this study was to compare the clinical results of patients undergoing anatomic Single-Bundle (SB) ACL reconstruction with a free QUADRI autograft against a quadrupled HAM autograft over one-year follow-up.

Patients with concomitant cartilage lesions>Outerbridge III, meniscal lesions requiring meniscectomy or repair, multiligamentous lesions and patients who had previously undergone knee surgery on the afflicted or contralateral knee were excluded.

The study included 45 patients, 35 of whom had ACL reconstruction utilizing quadruple Hamstring grafts and 10 of whom received Quadriceps tendon patellar bone grafts.

Along with clinicodemographic data collection, all enrolled patients underwent arthroscopic ACL reconstruction. All reconstructions were performed using a single bundle ligament. As a graft, an ipsilateral Hamstring (HAM) or Quadriceps (QUADRI) tendon was taken. A 2.5 cm to 3 cm transverse incision was made above the superior border of the patella to harvest the Quadriceps tendon. After incising the suprapatellar bursa, the Quadriceps tendon is revealed. At the middle of the superior border of the patella, a specific double knife with a width of 8 mm to 12 mm is inserted and pushed up to 8 cm proximal to the starting site.

After determining the thickness, a specific tendon separator is used to elevate the graft, which is subsequently separated from its proximal attachment using a special tendon cutter and the graft is retrieved. The graft is subperiosteally separated from the patella at its distal connection. The periosteal end of the graft is folded in half and stitched with a strong fiber wire to round it off and facilitate graft transit. Sutures are then threaded through a flip button device and secured subsequently. In both groups of patients, the graft was secured on the femoral side using a flip button device and on the tibial side with a bioscrew.

Prior to surgery, and at 6th week, 6th month, and one-year follow-up, all patients were evaluated using the Tegner-Lysholm knee grading system and the modified Cincinnati knee score.

Total 45 respondents were seen in the hospital for a follow-up of one year. Total 10 individuals had Quadriceps (QUADRI) grafts, and 35 had Hamstring (HAM) grafts. The demographic data for the groups were extremely comparable, as seen in Figure 1, the mean follow-up length for the HAM group was 11.96 ± 0.28 months, while the QUADRI group had a mean follow-up period of 11.25 ± 0.43 months. There were no statistically significant differences in Single leg hop and Lachmann grade scores between the two groups. There were no readmissions or reoperations for problems in either group (Figures 2 and 3). 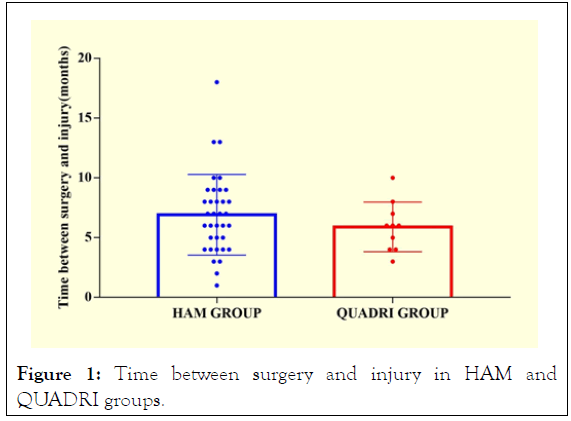 Figure 1: Time between surgery and injury in HAM and QUADRI groups. 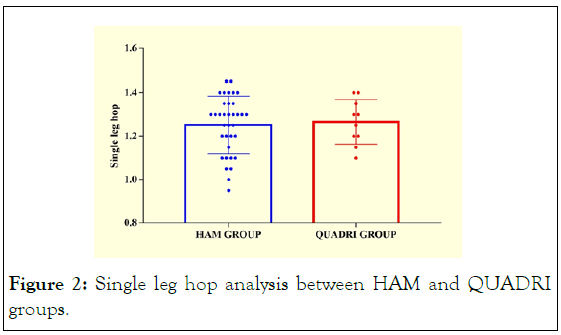 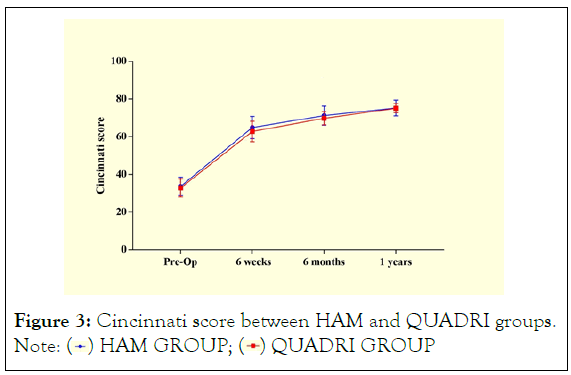 While the QUADRI-PB graft is one of the autogenous graft choices that has been examined and debated scientifically, it is less popular than the HAM graft (Figure 4). It is often preferable in revision surgery or when many ligaments are injured. From a biomechanical standpoint, a central Quadriceps tendon autograft, with or without a patellar bone plug, was demonstrated to be a viable choice for ACL reconstruction surgery [4]. 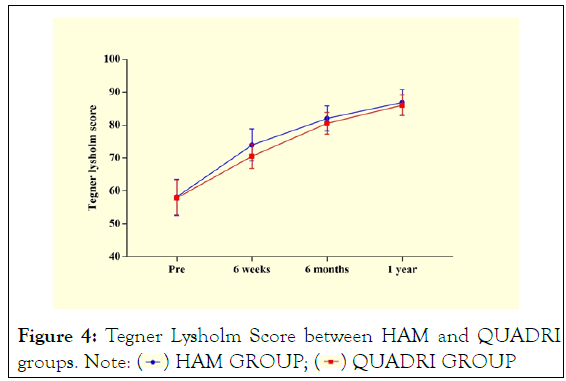 In the present study, total 10 individuals had Quadriceps (QUADRI) grafts, and 35 had Hamstring (HAM) grafts. When the Cincinnati Score was compared between the two groups, no significant differences were seen at either of the treatment's follow-up periods. Similarly, the Tegner Lysholm Score demonstrated no statistically significant differences in all follow up visits, except for the sixth week, in both the HAM and QUADRI groups.

To our knowledge, just one study, done in Romania by Todor, et al. compared the clinical outcomes of these two distinct autografts. Todor, et al. study's primary findings indicated that comparable results in terms of stability and patient-reported outcomes could be reached using either a HAM or a free QUADRI autograft [12]. They revealed no statistically significant difference between groups in terms of instrumented laxity tests, Lysholm, modified Cincinnati scores. Muscle recovery is another critical component of graft selection. Todor, et al. found a statistically significant difference between the QUADRI and HAM groups in terms of thigh muscle atrophy [12]. However, muscle recovery was not assessed in terms of strength, and preoperative thigh measurements were not documented.

This study clinically validates the use of a free QUADRI graft fixed on the femur with an extra-cortical button attached to the graft with high strength sutures, a technique previously described in the literature. A recent study by Houck, et al. showed similar results, with no difference between QUADRI and HAM autografts in patients with ACL reconstruction at 2 year follow-up [1]. However, the authors used bone-QUADRI grafts. Another study by Slone, et al. showed equal or better functional outcomes with bone Quadriceps graft compared to Hamstrings graft more than 3 years after ACL reconstruction [7]. Using a free QUADRI graft can minimize donor site morbidity without compromising the results. Overall, donor site morbidity has been found to be minimal with the Quadriceps graft, both with a normal or minimally invasive harvesting technique. Still, the QUADRI is the least used graft for primary ACL reconstruction, with about 10% of the reconstructions being performed with a Quadriceps graft [7,10,13]. It is expected that the use of this graft will be increasing in the future as data shows good anatomical and biomechanical characteristics to the QUADRI graft. Also, studies have shown good clinical results with QUADRI graft compared to patellar tendon graft, still considered the gold standard by some authors. Lund, et al. found comparable results in a prospective randomized trial comparing QUADRI with a patellar tendon [15]. However, knee walking pain was significantly less for QUADRI than with BTB. Similar results were reported by others. In a systematic review by Slone, et al [7]. Which included 14 studies of which 6 compared QUADRI grafts versus BTB grafts, there were similar results regarding laxity, functional outcomes, overall patient satisfaction, Range of Motion (ROM), and complications between QUADRI and other graft options [7]. A recent article by Belk, et al. reported less knee laxity in patients with QUADRI-ACL reconstruction compared to HAM patients but with no difference in failure rates between groups. Other advantages may be attributed to the QUADRI graft [16]. A study based on magnetic resonance imaging by Ma, et al. showed that graft maturity was better at 6 months following ACL reconstruction with QUADRI compared to HAM autograft [11].

The strengths to be noted with the study are the homogeneity of the groups in terms of demographics and the fact that pure ACL reconstructions were selected, without associated meniscal or cartilage procedures that could have influenced the outcomes and that the same surgical technique was used throughout the study and by the same operating surgeon. However, the study has several limitations to be considered. First, it is a retrospective study with the documented clinical examination at the last follow-up. Also, the follow-up duration was short (only one year). The person who collected the data was also not blinded to the graft used. Furthermore, the graft choice was not randomized, and the decision was made by the operating surgeon after discussing it with the patients. The author recommended further metacentric prospective studies with large samples to increases the studies reliabilities and generalizibilities.

Copyright: © 2021 Aslam MA, et al. This is an open-access article distributed under the terms of the Creative Commons Attribution License, which permits unrestricted use, distribution, and reproduction in any medium, provided the original author and source are credited.