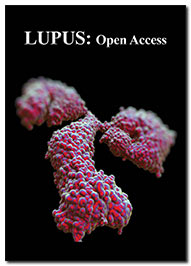 Systemic lupus erythematosus and ankylosing spondylitis are two separate immunological disorders with different etiopathogenic profile and their coexistence is very rare. Here we describe two cases of ankylosing spondylitis with SLE. The first case was HLA B27+ arthritis with predominant peripheral involvement with bilateral hip disease associated with non-scarring alopecia, recurrent oral ulcers and positive immunological markers fitting into criteria for lupus. The second case was 37 year’s old male lupus (predominant MSK and cutaneous) patient with high titre ANA and anti dsDNA positive diagnosed in 2011 and on treatment with methotrexate who now presented with inflammatory low backache. On evaluation, he was found to have HLA B27+ with bilateral active sacroilitis. The distinguishing feature of our cases is that in the first case, both the disorders presented at nearly same time frame while second case had a significant time frame between the two disorders.

Only few cases have been reported in literature regarding coexistence of ankylosing spondylitis and Lupus. In our present case from the lupus point of view, she has non scaring alopecia, recurrent oral ulcerations, ANA and anti-ds DNA positivity and low complement. On the other hand, patient satisfies the ASAS criteria for peripheral SPA by HLA B27 positivity, arthritis and enthesitis. Most of the reported cases including the present case are female’s. In most of the cases SLE presents before the spondyloarthritis, whereas in our case both the disorders manifest at a same period of time. It is in 1982 when the 1st case of lupus with SPA was reported in a 43 year old male patient [1].

A 64 year old female presented to rheumatology OPD with complaints of bilateral knee joint pains (Right>Left) and right ankle joint pain. Pain is inflammatory in nature associated with swelling and morning stiffness. There was no history of low back ache or any other joint pains. There was no associated history suggestive of skin, eye or bowel involvement. On further probing, she gave the history of bilateral hip pain associated with difficulty in walking. She underwent bilateral hip arthroplasty 8 years back secondary to hip arthritis. After hip replacement she had on and off episodes of bilateral knee joint pains, right ankle joint pain and heel pain which got aggravated since 6 months with no relief on NASID’s usage when she presented to our department. She also revealed a history of erythematous lesions over the scalp which was followed by patchy hair loss with absence of regrowth of hair 8 years ago while she was suffering from hip pains. She also describes recurrent oral ulcers over the tongue and buccal mucosa. There was no history suggestive of any sicca symptoms or raynaud’s phenomena. On general examination, non-scarring patchy alopecia was present with no active lesions (Figure 1). Oral ulcerations were present over the lateral border of the tongue and buccal mucosa. Systemic examination was suggestive of synovitis of bilateral knee and right ankle joint. She was then preceded for investigations where hemogram, liver and kidney function tests were normal. Her ESR and CRP were raised. Urine routine microscopy and protein creatinine ratio were normal. Uric acid levels were normal. HLA B27 was positive. X-ray pelvis revealed normal SI joints. ANA was positive with intensity at a titre of 1:320 and homogenous pattern. ANA profile was positive for nucleosome and anti-ds DNA. Anti-ds DNA titres were done by ELISA which reveals a significantly elevated titres (88.6 IU/ml). Serum complement levels were low. MRI, SI joint and skin biopsy were suggested but patient was not will for further investigations. Finally she was labeled as spondyloarthritis with mucocutaneous lupus and was managed with HCQ’s, low dose steroids on tapering dose and methotrexate. To the best of our knowledge, this is one of the few case reports where SLE and spondyloarthritis coexist with similar period of presentation. Figure 1: Non-scarring patchy alopecia was present with no active lesions.

A 37 year old male presented in 2011 with inflammatory pain in small joints of both hands along with excessive hair fall and recurrent oral ulcerations. His investigations revealed positive ANA (1 in 2560 with 4+ intensity and homogenous pattern) and ANA profile was positive for Anti dsDNA and anti-smith antibodies. Rheumatoid factor and anti CCP were negative. Complement levels were low and urine PC ratio was normal. He was then started with methotrexate and low dose steroids (which were tapered and stopped). He took treatment for 2-3 years and stopped all medications on his own. He had again a flare of 5 years after initial presentation which was managed with steroids on tapering dose and methotrexate was restarted. Patient now presented in 2021 June with inflammatory back pain and right knee joint pain associated with swelling since 2-3 months. On evaluation, ESR and CRP were raised. Hemogram, liver and kidney functions were normal. HLA B27 by PCR was positive. MRI SI joint was done suggestive of active left sacroilitis and subacute to chronic right sacroilitis (Figure 2). Patient was labeled as ankylosing spondylitis with SLE and was advised for NSAID therapy for 4 weeks followed by plan to start biological therapy if not responded. Recently in 2020 studies 281 SLE patients in which inflammatory back pain was present in 16.3%, sacroilitis was seen in 7.8% and only one patient was HLA B27 positive [2]. Researchers described sacroilitis in 9 patients with active SLE with elevated radionecleotide uptake ratios in SI joints and further reported that uptake ratios returned to normal in patients achieving remission [3]. In 1985 it is reported sacroilitis in 16 male patients with SLE and HLA B27 was negative in all of them [4]. Studies have suggested that the combination of HLA-B27 with HLA-A1 and HLA-DR2, or with HLA-A1 and HLA-DR3, is very rare [1].This suggests that other than HLA association, some other linked pathogenesis exists between these two disorders. Many studies recently have suggested the importance of IL17/23 axis in ankylosing spondylosis pathogenesis. Even though SLE is mainly mediated by interferon pathways, recent studies are showing elevated IL 17 levels in SLE [5]. IL 17 can directly stimulate the B cells to produce autoantibodies and is responsible for autoimmune disease process [6]. Further, some more studies are suggesting that there is recruitment of IL 17 producing T helper cells in kidney, skin and CNS in SLE patients [6].

From this it can be considered that, IL 17 can act as a common gateway for both disorders and further studies are needed to confirm this entity. Even though it is a rarity, there can be a coexistence of these disorders. Our cases are particularly emphasizing the time frame of two different disease presentations, one case with two disorders in same time frame and other case with a significant time gap between two disorders which can evoke a therapeutic challenge for a treating Rheumatologist.

Copyright: © 2022 Bhavya C. This is an open-access article distributed under the terms of the Creative Commons Attribution License, which permits unrestricted use, distribution, and reproduction in any medium, provided the original author and source are credited.