Background: We have reported that aldehyde dehydrogenase 2 (ALDH2) inhibitors suppress alcohol seeking and drinking in rats even in the absence of alcohol and acetaldehyde. These behavioural changes suggest that ALDH2 in brain could be a target for ANS-6637 inhibition to suppress alcohol seeking and drinking. Here we ask whether ALDH2-RNA anti-sense administered directly into the Ventral Tegmental Area (VTA) also reduces alcohol drinking.

To overcome these limitations of disulfiram therapy, we developed ANS-6637, a highly selective and reversible inhibitor of ALDH2, which does not inhibit other ALDH isoforms (unpublished). ANS-6637 was developed because our earlier studies with another specific ALDH2 inhibitor suppressed alcohol seeking and drinking in a variety of rats [6]. ANS-6637 is well tolerated by human subjects, and apart from flushing, has none of the severe adverse systemic effects of disulfiram, even in the presence of five standard drinks in 2.5 hr. So why will ANS-6637 inhibit drinking?

In preclinical studies we found that selective inhibition of ALDH2 prevents reinstatement of cue-induced drinking even in the absence of alcohol, and therefore, acetaldehyde [6]. Suppression of alcoholseeking behavior by an ALDH2 inhibitor in the absence of alcohol and acetaldehyde suggested that ALDH2 in the CNS might be a target for the drug. A neural mechanism of action was suggested in a detailed study demonstrating that pharmacologic inhibition of ALDH2 suppresses cocaine addiction in the VTA [7]. Consistent with this result, here we report that ALDH2 antisense injected into the VTA reduces alcohol drinking in alcohol-preferring iP rats. Importantly, scrambled antisense was used to control for nonspecific effects. These observations suggest that ALDH2 in the VTA appears to be an important target for pharmacologic ALDH2 inhibitors to reduce alcohol drinking.

Use of RNA antisense to inhibit ALDH2

Animals: iP male rats at about seven-weeks-old weighing ~340 g were obtained from Indiana University Medical Center breeding colony in accordance with their Institutional Animal Care and Use Committee (IACUC) approved animal protocols. iP rats were individually housed at Gilead Sciences’ animal facility with food and water available ad libitum, except when stated otherwise. Animals were maintained on a reversed 12-hr light: 12-hr dark cycle, lights on at 18:00 hr. The experimental procedures were approved in advance by the Gilead Sciences IACUC. Animals received humane care according to criteria outlined in the National Institutes of Health Guide for the Care and Use of Laboratory Animals.

Alcohol 2-bottle choice: iP rats were trained to drink alcohol using standard methods [8]. After one day of water only, they were forced to drink 10% (v/v) alcohol for three consecutive days. Thereafter, except for special conditions to be described later, they were offered continuous access to water and 10% (v/v) alcohol in their home cage and intake was recorded every 24 hr. Rats had continued access to water and alcohol for five to six weeks until they showed stable levels of alcohol drinking, and were then scheduled for stereotaxic surgery for ventral tegmental area (VTA) cannula implantation as described below. After three days of recovery from surgery in which rats were offered water in home cage as the only fluid source, 10% (v/v) alcohol was again introduced in their home cage. Rats had four additional weeks of water and alcohol choice access before receiving ALDH2 antisense or control microinjections, as described below. Water and 10% (v/v) alcohol intake was monitored for 17 additional days post antisense or scrambled control microinjections.

Stereotaxic VTA cannula implantation: Animals were placed in an induction chamber attached to an isofluorane vaporizer (Anaesthesia machine, Vet Equip, Pleasanton, CA) to induce anaesthesia. Once the animal lost the righting reflex and did not respond to a tail or toe pinch, the hair on incision area was removed by the use of a hair clipper. The rat was then placed in a stereotaxic device and anaesthesia was maintained through a nose cone attached to the stereotaxic unit. Anaesthesia was assured throughout the duration of surgery (between 1-2 hr), by checking rats’ breathing rhythm as well as response to tail/toe pinch. A midline scalp incision from between eyes to end of external occipital crest was made. A small hole was drilled in the skull and bilateral cannula (26 gauge, stainless steel, Plastics One, Roanoke, VA) were implanted to a depth 1 mm above the VTA (AP: 5.6, ML: ±1.0, DV: -8.0). The surgical implants were fixed to the skull with two stainless steel screws and dental acrylic; the skin was closed around the implant with suture. The cannulae were plugged with dummy pins that were left in place until the animal was ready for antisense microinjection.

Antisense VTA microinjection: Two 32-gauge injectors connected to gastight microliter syringe driven by an infusion pump (model 11, Harvard Apparatus, Inc., Holliston, MA) were bilaterally inserted into the pre-implanted cannulae in the VTA. A volume of 2 μl/side was expelled from the pump over 10 min. The syringe was left in place for 10 additional min to allow for diffusion from the site.

Histology: At the end of the experiment, histology was performed to verify cannulae implantation placement. Rats were sacrificed by rapid decapitation, and brains kept in formaldehyde (4% in PBS) for a minimum of one week and then transferred to 30% sucrose in PBS; they were then sliced in 40 μm sections on a freezing microtome and slide-mounted for microscopic verification of probe placement. Once visualized, cannulae tracks were plotted using the atlas of Paxinos and Watson [9].

Construction and production of recombinant adenoviral vector expressing rat AGS3 antisense: Recombinant adenoviral AGS3 antisense vectors (Ad5AGS3AS) were created by cloning rat Aldh2 cDNA in the reverse orientation preceded by a CMV promoter and followed by a poly-A termination signal into the E1A gene of the adenovirus. To make the recombinant adenoviruses, Ad5AGS3AS vectors were linearized and transfected into 50%– 80% confluent human embryonic kidney (HEK)-293 cells (ATCC), grown in Dulbecco’s modified Eagle’s medium containing 4.5 mg/ ml glucose, 100 μg/ml penicillin, 0.1 mg/ml streptomycin and 10% fetal bovine serum. Two weeks later, cells were harvested by brisk pipetting, resuspended in PBS, and lysed by three cycles of rapid freezing in ethanol/dry ice and thawing at 37°C. The lysate was then centrifuged at 600×g to remove cell debris. For large-scale production, HEK293 cells were reinfected with the virus stock and harvested three days later. Viruses were purified by CsCl banding and dialyzed three times against PBS containing 5% sucrose. To determine viral titers, HEK293 cells were seeded in 6-well plates and infected with dilutions of the virus stocks 24 hr later. Two hours after infection, medium was removed and cells overlaid with medium containing 2% fetal bovine serum and 1% agarose. Two weeks later, the number of virus plaques was recorded. A titer of 1012 plague forming units/ml was used for VTA microinjection. 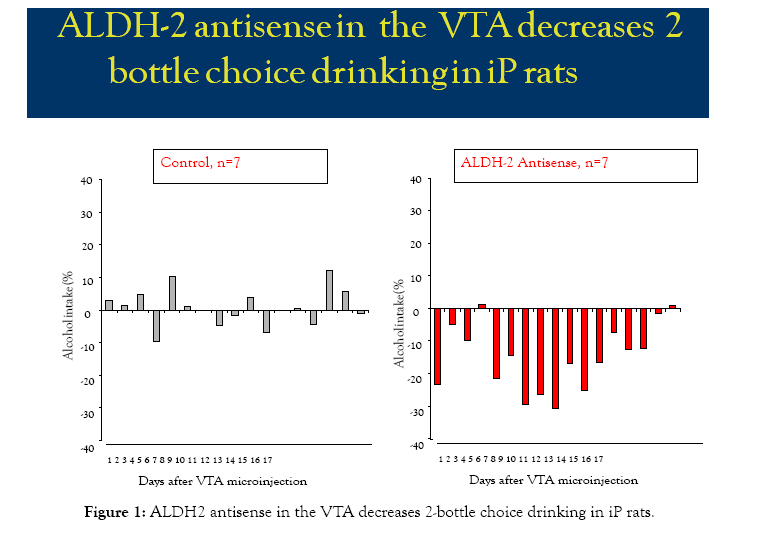 ALDH2 antisense injected intravenously reduces alcohol drinking, apparently by inhibiting hepatic ALDH2 and increasing acetaldehyde [12]. On the other hand, Sinclair and Lindros were among the first to suggest that selective inhibition of brain ALDH suppresses alcohol drinking in the absence of acetaldehyde [13]. Similar findings were reported with Daidzin, an ALDH2 inhibitor [14]. The major finding in our study is that ALDH2 antisense in the VTA is sufficient to reduce alcohol drinking. We have reported that recombinant adenoviral AGS3 antisense vector injected into the VTA has a well-defined time course with peak expression at 7-10 days [11]. This time course correlates directly with the time course for reduced drinking behavior in this study (Figure 1). We know that inhibition of ALDH2 suppresses alcohol drinking and reinstatement of drinking even in the absence of alcohol and acetaldehyde [6]. Taken together, our studies suggest that ALDH2 in the VTA appears to be an important target for ALDH2 inhibitors. These findings are consistent with clinical observations that ALDH2 deficiency is associated with reduced drinking and risk for alcoholism [15,16]. However, there has been concern that actively drinking Asians with ALDH2 deficiency may be at risk for esophageal and other cancers [17].

Our findings are in contrast with a report that an ALDH2 cDNAcoding lentiviral vector in the VTA reduces alcohol drinking in naïve rats, but paradoxically not in experienced drinking rats [18]. The major limitation of that study is that empty vectors used as controls do notcontrol for nonspecific effects [19]. Under entirely different experimental conditions, our studies included scrambled antisense as controls.

What is the mechanism of action of ALDH2 inhibition in the VTA?

ALDH2 is active in brain with dopamine aldehyde as a primary substrate [20]. Pre-clinical and clinical studies demonstrate that alcohol, drug and food addiction is associated with dopamine surges in a dopamine motive system [21]. Current concepts suggest that dopamine appears to be associated with craving, relapse and continued drug use, as illustrated with cocaine and alcohol [21,22]. Consistently, dopamine receptor antagonists have been reported to reduce excessive drinking and addictive drug use [23]. A more direct approach to target this pathophysiologic mechanism would be to prevent the underlying dopamine surge to attenuate alcoholand drug-seeking behaviour. Activated tyrosine hydroxylase is the rate-limiting step in dopamine synthesis [24]. We have reported that selective ALDH2 inhibitors generate an endogenous usedependent, highly selective negative feedback inhibitor of the activated form of tyrosine hydroxylase, tetrahydropapaveroline (THP). THP is not detectable in the absence of drug-seeking behaviour. Thus, treatment with an ALDH2 inhibitor produces a striking reduction in dopamine levels in the VTA and nucleus accumbens associated with a loss of alcohol-, binge eating- and drug-seeking behaviour [6,7,25].

In this brief report we extend our previous observations to suggest that ALDH2 in the VTA could be a major target for ALDH2 inhibitors in brain. We did not, however, assay ALDH2 activity. Despite this limitation, our findings are consistent with our earlier studies that selective ALDH2 inhibitors hold promise for helping alcohol use disorder patients overcome craving and relapse even in the absence of alcohol or acetaldehyde.

Copyright: Ivan Diamond, et al. This is an open-access article distributed under the terms of the Creative Commons Attribution License, which permits unrestricted use, distribution, and reproduction in any medium, provided the original author and source are credited.