Background: Switzerland is a traditional immigration country with immigrants from both neighbouring, and less developed countries. Since the early 1990s, the migration rate has continuously increased and in 2013 almost a quarter of Swiss residents had an immigration background. Immigrants in Switzerland had fewer psychiatric hospitalisations, but more emergency and compulsory admissions than the local population. Therefore it is important to study the characteristics of the immigrant population presenting at the emergency department for mental health problems. Methods: Our retrospective data analysis included adult patients (age ≥ 16 years) admitted to our emergency department who consulted a psychiatrist, between 1st of January 2007 and 30th of October 2012. Results: Clinical data from a total of 1115 patients were available for analysis. Of these, 58.6% (n=654) were male and 41.4% (n=461) female. The mean age was 36.3 years, with a range of 16–85 years. The most common reason for psychiatric presentation to the emergency department was psychosis (n=227, 20.3%), followed by social problems with 18.2 % (n=203), auto-aggression with 16.4% (n=193) and 16.2% (n=181) suffering from depression. Conclusions: Translation services are very important. Therapy adherence programs for psychosis and autoaggression prevention programs are especially important for immigrants.

Switzerland is a traditional immigration country with immigrants from both neighbouring, and less developed countries [1]. Since the early 1990s, the migration rate has continuously increased and in 2013 almost a quarter of Swiss residents had an immigration background [1]. Switzerland has the highest percentage of immigrants of any European country [2].

The implications of migration for the mental health are widely accepted, and immigrants are classified as a high risk group for mental health problems [3-6].

According to Lay et al. [7] immigrants in Switzerland had fewer psychiatric admissions to hospitals, but more emergency and compulsory admissions than the local population. However between 2000 and 2010 the cases of immigrants in Switzerland with psychiatric problems increased from 2 to 10% [8]. Therefore it is important to study the characteristics of the immigrant population presenting at the emergency department for mental health problems. Equivalent studies have been performed in the Netherlands [9] and in Canada [10].

The aim of this study was to obtain an overview of the mental health status of immigrants admitted to the emergency department for psychiatric reasons. It is hoped that the results will lead to recommendations for and optimisation of treatment programs for this target group.

Our retrospective data analysis included adult patients (age ≥16 years) with an immigration background admitted to our emergency department and consulting a psychiatrist, between 1st of January 2007 and 30th of October 2012. Our emergency department has a psychiatrist on call 24h a day and is responsible for the emergency psychiatric care for Canton Bern. In our routine clinical databases Qualicare (Qualidoc AG, Trimbach, Switzerland) and E.Care (E.care bvba, Turnhout, Belgium), 1673 patient records were identified. Migratory background was defined as having a nationality other than Swiss. This includes a diverse immigrant population, from refuges to third generation immigrants. Only nationality is known and no further information such as length of stay in Switzerland before presentation, socio-economic status and employment status could be obtained. Individuals with rudimentary case files only or incomplete medical records were excluded from the analysis. Patients were divided by geographical regions as follows: northern, southern, central and eastern Europe, northern, southern and western (Middle East) Asia, North and Sub-Saharan Africa, North and South America and Oceania.

The following clinical data were extracted from medical records: Demographic data such as gender, age and nationality; then the reason for presentation, diagnosis, referral, and outcome. No nursing records were consulted. All medical records were reviewed by a psychiatrist. The reasons for presentation were grouped according to diagnosis and medical history. Each patient was assigned to one group only. If the patient presented for more than one reason, the major problem at the time of presentation was taken into account.

All statistical analyses were performed with the SPSS 17.0. We performed a descriptive analysis of patients’ demographic characteristics, diagnoses and reason for presentation. Continuous variables are presented as means (standard deviation, SD), while categorical variables are presented as absolute and relative frequencies. Age was grouped into 10-year categories, except for the first and the last group (16-19 and 80-85). The significance of the data was analysed with the chi-squared test for qualitative data the unpaired t test for quantitative data. All p values were two tailed, with a level of significance of 0.05.

Ethical considerations: The study was performed retrospectively with health related patient data that were exported anonymously for analysis. None of the authors had access to identifying patient information and none of the authors was potentially a treating physician of the patients involved. According to Swiss human research act and human research ordinance this kind of studies do not need any ethical statement nor is a patient consent necessary.

Between 2007 and 2012, the annual number of psychiatric patients in our emergency department increased from 68 immigrant patients to 315 per year This increase is in parallel to all hospital admissions and in relative numbers the immigrant patients remained stable with 20-22% compared to the total psychiatric admissions. In the same time of the stable Swiss population 22-23% was non-Swiss [11].

Three quarters of these patients (n=27) were men, with a mean age of 33.8 years (SD=13.1). In the 20-29 year old group, the most common reason for admission was auto aggression, with 24.4% male (n=48) and 24.7% (n=26) female patients, corresponding to 24.5% (n=74) of the total patient population. Social Problems and psychosis were the second most frequent reasons for admission, with 17.2% each. In the 16-19 age groups, auto-aggression was the most frequent reason for admission in both male and female patients, with 30.7% of the total patient population of this group. 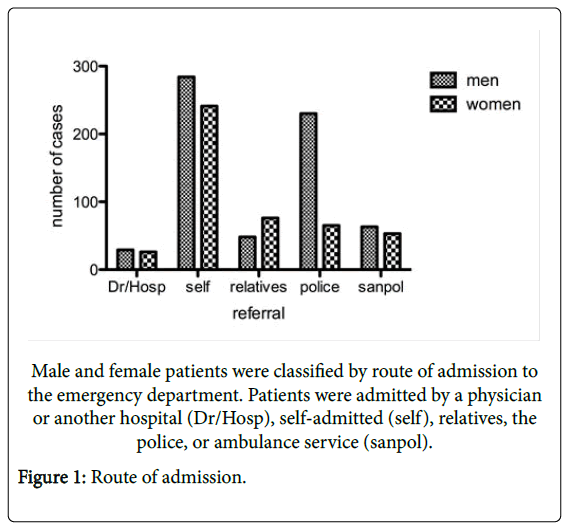 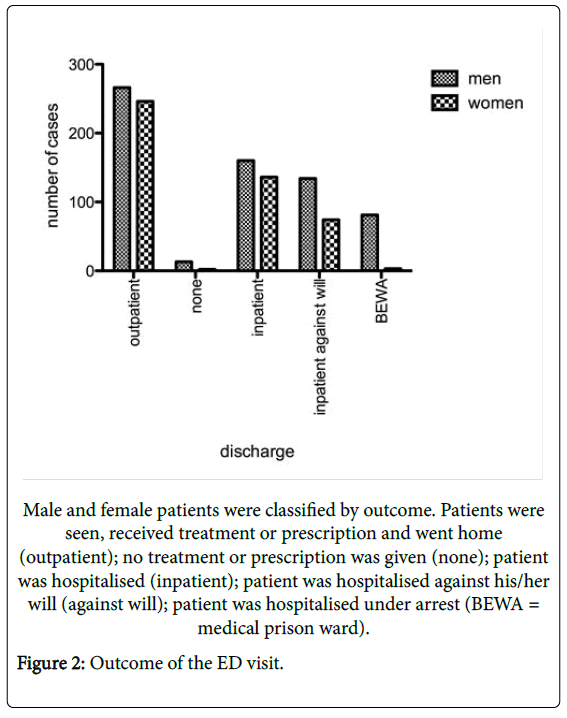 Figure 2: Outcome of the ED visit.

Between 2007 and 2012 the annual number of psychiatric patients in our emergency department increased from 68 immigrant patients to 315. This increasing number of psychiatric emergencies amongst immigrants mirrors the increase in the total number of psychiatric emergency cases in our emergency centre and relative numbers were stable at 20.1-21.4%. If we review the reasons for presentation, we may draw crucial conclusions that may help us to a better understanding of the patterns of medical service use in different ethnic groups. In our study, the most common reason for ED admission was psychosis. This is similar to other studies that reported psychotic symptoms as most common among immigrants in emergency departments [17,20]. A systematic review by McGarth et al. reported that psychotic episodes are more prevalent among ethnic minority groups [9]. This might be due to misunderstood cultural behaviour and are wrongly regarded as pathological [21]. As a comparison in a Swiss study of 550 patients (41.4% men and 58.6% female) where 43% were admitted due to affective disorders, followed by addiction disorders with 21% and neurotic disorders with 12.3% [22].

Other interesting finding concerns the age of the auto-aggressive patients; these patients were significantly younger than the rest. This finding is supported by the finding that auto-aggression was the most frequent reason for presentation in the two younger patient groups (16-19 and 20-29). This correlates with the findings of a study in the US [23].

Approximately half of the patients (n=525, 47%) were self-admitted. One of three men (n=230) came to the emergency department accompanied by the police, while this applied to only 14% (n=65) of women.

Out-patient treatment was suggested for 45.9% (n=512) of the total population, but it is unclear which of these patients actually received therapy. Other studies have shown that only a small percentage of these patients follow-up on these recommendations [24,25]. Compared to that 43.6% of Swiss patients were treated on an outpatient basis and 37.3% were admitted to a psychiatric clinic [22].

As in other studies, we confirm that immigrants have a high rate of compulsory presentation to mental health emergency departments [17,26,27]. In psychiatry, the main clinical examination tool is language, a fact that sometimes raises barriers in care provision. It is an advantage of our centre that Bern is on the border between the German and French speaking areas of Switzerland, so that many of the Swiss staff is bi- or trilingual and many members of the medical team have an international background. In addition, a private company can provide a translator, although this it is not always possible in daily emergency practice. This problem is probably underestimated. Many studies indicate that language barriers are associated with longer visit time per clinic visit, less frequent clinic visits, less understanding of the physician's explanation, more laboratory tests, more emergency room visits, and less follow-up, possibly leading to high rates of relapse [15,28,29].

There are several limitations to this study. Because of the retrospective study design, misinterpretations cannot be excluded. The exclusion of 558 patients because of the lack of clinical data may also bias our results. Moreover, our data collection was not standardised. It should also be noted that this study does not represent a cross-section of the state of health of the whole immigrant population. Completed suicides were not studied as these cases were not examined by a psychiatrist. Unfortunately we do not have any data available of the psychiatric admissions among the Swiss population in our centre and no detailed information about socio-economic status, employment status or length of stay could be obtained.

As psychosis is the most common reason for psychiatric admission to the emergency department, it is important to direct awareness programs to implement adherence to out-patient treatment. Another important area for improving prevention would be auto-aggressive behaviour in younger patients. The language barrier and its dire implication on treatment in the Emergency Department is something that should be addressed. The use of translation services is very important in avoiding misdiagnosis and might contribute to lowering the high compulsory admission rates. However, translating costs are no longer covered by medical insurance, so that the psychiatric service may deteriorate further. Furthermore, we need wide-ranging research on the mental healthcare problems of immigrants. This must take cultural factors into consideration and could lead to recommendations to improve the psychiatric care of the increasing population of immigrants in Switzerland.

All authors do not declare any conflict of interest

Copyright: © 2016 Chatzidiakou K, et al. This is an open-access article distributed under the terms of the Creative Commons Attribution License; which permits unrestricted use; distribution; and reproduction in any medium; provided the original author and source are credited.