This paper studies the parallelization of the restarted GMRES solver, GMRES (m), and the block ILU (k) preconditioner on GPUs used in petroleum reservoir simulations. The difficulty is how to accelerate this preconditioner with a variable block size. In this paper, parallel solution techniques for block triangular systems are proposed, which work for matrices with an arbitrary block size. These techniques also work with an arbitrary level k for the block ILU (k) preconditioner. Numerical experiments show that the GPU-based linear solver GMRES (m) is much faster than its CPU version.

Linear solvers and preconditioners have been studied for decades and various techniques have been developed. Saad et al. developed the GMRES (generalized minimal residual) linear solver, which is a general purpose solver for nonsymmetric linear systems [2,3]. Vinsome designed the ORTHOMIN (orthogonal minimum residual) solver, which was originally developed for reservoir simulations [4]. The BICGSTAB (bi-conjugate gradient stabilized method) solver is also widely applied to reservoir simulations. These Krylov subspace linear solvers are general purpose and can be applied to any kinds of linear systems. When the matrices of linear systems are positive definite, multigrid methods are the most effective, including algebraic multigrid methods and geometrical multigrid methods. It is well-known that the convergence rates of these multigrid solvers are optimal [5-9].

For reservoir simulations, each grid block has several unknowns, such as pressure, temperature and saturations. If all unknowns in each block are numbered consecutively, the matrix A from the Newton methods has the following structure:

where A is a non-singular matrix, each block Aij (1 ≤ i, j ≤ n) is an m × m matrix, and m is the block size. The same linear system also exists in other applications where more than one equations exist. When m is unity, matrix A is a regular matrix or a regular point-wise matrix; when m>1, it is a block matrix. The block matrix A is equivalent to an nm×nm point-wise matrix. Here the following linear system is studied:

here b (∈Rnm) is the right-hand side and ×(∈Rnm) is the unknown to be solved. In practice, if A is ill-conditioned, an equivalent sparse linear system is solved:

The block ILU factorization has the form M = LU, where L and U are given as follows:

The framework of this paper is as follows: In §2, the GMRES solver and techniques for GPU computing are studied. In §3, the point-wise and block ILU (k) preconditioners are introduced and the solution techniques for the block triangular systems on GPUs are proposed. In §4, numerical experiments are carried to test the performance of the GMRES solver and the block ILU (k) preconditioner.

The GMRES solver is an iterative solution method for nonsymmetric linear systems developed by Saad and Schultz [2,3]. The method approximates a solution by a vector in a Krylov subspace with a minimal residual, where the Krylov subspace is defined by

From Algorithm 1, we can see that all operations except the solution of the preconditioning system are matrix-vector multiplication and vector operations:

A vector is simply an array and algorithms for vector operations have been studied very well. NVIDIA also provides BLAS operations through the NVIDIA cuBLAS library. However, the sparse matrixvector multiplication (SpMV) operation is much more complicated than the vector operations. The reason is that the NVIDIA GPUs have different architectures from traditional CPUs [19,37] and algorithms that work well on CPUs may not work effectively on GPUs. Special data structures and algorithms for GPUs are required to design. The NVIDIA company developed parallel SpMV algorithms for CSR (compressed sparse row), ELL (EllPack), COO (coordinate) and HYB (Hybrid) matrices. The HYB matrix is a general matrix format for GPU computing, which is a hybrid of an ELL matrix and a COO matrix. Saad et al. designed a parallel SpMV algorithm for the JAD matrix. Here we use a hybrid matrix format HEC, which is shown by Figure 1 [21]. An HEC matrix consists of two parts: an ELL matrix and a CSR matrix. The ELL matrix is regular and each row has the same length. When being stored on GPUs, the matrix is in column-major order. The CSR matrix stores the irregular part of a given matrix. The advantages of the HEC matrix are that it is easy to design a SpMV algorithm and it is also friendly to ILU preconditioners [21,22,24].

A sparse matrix-vector multiplication kernel [21] is developed as shown in Algorithm 2. The algorithm has two steps. The ELL part is calculated first and then the CSR part is processed. Each GPU thread calculates one row of the given sparse matrix. More details can be found in [21]. If the SpMV kernel and vector operations are implezhe GMRES solver and other Krylov linear solvers can be implemented straightforwardly. In the following sections, we will focus on preconditioners. 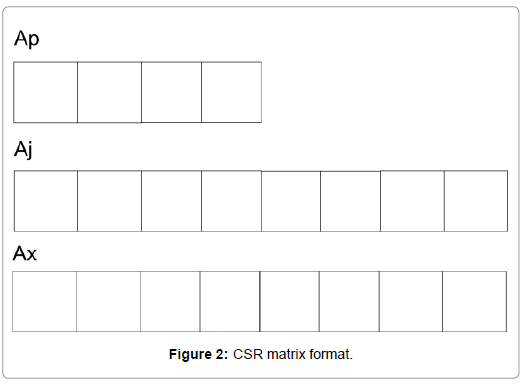 The ILU preconditioner M is defined as M = LU, and the L and the U are

Regarding as the Algorithm 4, we should mention that the algorithm is highly sequential. Let us take the solution of the lower triangular system, Lx = b, as an example. The ith component of x is solved as follows:

The point-wise ILU (k) is obtained if fill-ins whose levels are less than or equal to k are allowed; the algorithm is shown in Algorithm 5.

Algorithm 5 can also calculate the structure of the point-wise ILU (k) preconditioner by discarding entries whose levels are greater than k. In practice, we calculate its structure first, and then initialize the values of all entries using the original matrix A. The fill-ins have values of zero. At the end, by using the algorithm for the ILU (0) factorization, the point-wise ILU (k) preconditioner is computed. The resulting preconditioning system is solved by Algorithm 4. Algorithms 3 and 5 are from [3] and more details can be found in [3].

The block ILU(0) factorization is shown in Algorithm 6. All operations on matrix A are matrix operations, such as the inverse of the diagonal matrix Akk , A−1 and the matrix-matrix multiplication Aik×Akj . The lower block triangular matrix L and the upper block triangular matrix U are the same as in (4) and (5). The preconditioning system Mx=b is equivalent to system (6), which can be solved by the forward and backward block Gauss elimination. The implementation on CPUs is straightforward. In the next section, solution techniques on GPUs are proposed.

Where Lij is the (i, j)th entry of L, l(i) is zero initially and n is the number of rows. The level schedule method is described in Algorithm 7. For GPU computing, each level in Algorithm 7 can be parallelized. Parallel triangular solvers for GPUs have been developed [38], which were designed for point-wise matrices. The HEC matrix format [21] was adopted for the parallel triangular solvers, which is demonstrated in Figure 1 [21]. The number of levels in Algorithm 7 depends on the lower triangular matrix L. The ideal case is that there is only one level and the solution process is fully parallelized. The worst case is that the number of levels equals the number of rows; in this case, the solution is completely sequential. The GPUs have the lowest performance.

The level schedule method can also be applied to block matrices. However, since the block size is variable, it is difficult to design algorithms that can match the architectures of GPUs with a variable block size. Here, we reorganize the ILU factorization using three matrices:

Which can be solved in three steps:

Then the block triangular problems are converted to point-wise triangular problems. The linear systems Lty = b and Ut x = z can be solved by the traditional level schedule method, and the system z = D-1y is a matrix-vector multiplication operation. By using the algorithms developed in [38], a parallel solver for block triangular linear systems on GPUs is developed, which works with arbitrary block size. Its algorithm is shown in Algorithm 8.

In this section, numerical experiments are carried out to test the restarted GMRES solver and the block ILU(k) preconditioner. The experiments are performed on our workstation with Intel Xeon X5570 CPU and NVIDIA Tesla C2070 GPUs. The operating system is the CentOS X86 64 with CUDA Toolkit 5.1 and GCC 4.4. All CPU codes are compiled with -O3 option and use one thread only. All calculations use double precision. The solver is GMRES (20). The termination criterium is 1e-4 for the relative error and the maximal number of iterations is 200.

Example 6.1 The matrix is the parabolic fem from the matrix market [39]. The summary is given in Table 2. The block ILU(k) with different block sizes and levels are tested. The GPU time is the running time for the GPU-version linear solver and preconditioner, and the CPU time is the running time for the CPU-version linear solver and preconditioner. The number of iterations and the speedup are also collected.

From Table 2, we can see when the block size is one, the performance of the block ILU(k) preconditioner with different level settings is similar. The speedups are between 7.41 and 7.83. The results show that the GPU-version linear solver is much faster than the CPU-version linear solver. When the block size is five, the speedups are between 6.10 and 6.86. The reason is that if we increase the block size, Algorithm 7 has less parallelism and the performance of GPUs is limited. From Table 2, we can also find that the case with a larger block size uses more computation time [40]. The reasons are that a small block has m × m entries, the given matrix A is sparse, and many zero entries are filled-in. These fill-ins introduce extra computations. However, the advantage is that when the matrix is ill-conditioned, the block ILU(k) preconditioner with a larger block size is more stable.

Example 6.2 The matrix used in this example is the atmosmodd [39]. The results are given in Table 3.

Example 6.3 The matrix is P3D7P, which is from a threedimensional Poisson equation, i.e., a pressure equation. The numerical summaries are shown in Table 4.

Example 6.4 This example tests the linear solver GMRES without a preconditioner. The results are shown in Table 5.

The support of Department of Chemical and Petroleum Engineering, University of Calgary and Reser- voir Simulation Group is gratefully acknowledged. The research is partly supported by NSERC/ AIEE/Foundation CMG and AITF Chairs.

Copyright: © 2015 Liu H, et al. This is an open-access article distributed under the terms of the Creative Commons Attribution License, which permits unrestricted use, distribution, and reproduction in any medium, provided the original author and source are credited.
Top