Heparin is an important therapeutic agent for the prophylaxis and treatment of thrombosis. Although effective, heparin can cause, among other adverse effects, bleeding and thrombocytopenia, being obtained from bovine lungs and porcine intestines, causing concern about contamination with pathogenic animal agents. This study aimed at reviewing the literature on the relationship between the sulfated polysaccharides isolated from plants and anticoagulant activity. Based on articles published between 2009 and 2016 was found that sulfation of polysaccharides can potentiate its biological activity, which is, in turn, influenced by the degree of substitution obtained, in the reaction, of the position of the sulfate group in the molecule or the final molecular weight. Thus, it is evident that the interest in the use of plant sulfated polysaccharides in the therapeutic field has increased, demonstrating the relevance of research in the field of drugs and materials.

Since 1940, heparin, which is a naturally sulphated polysaccharide of animal origin, has been the drug of choice for treatment and prevention of venous thrombosis and thromboembolism [1]. However, this is an expensive substance, with limited supply and can cause bleeding and thrombocytopenia. In the search for effective anticoagulants such as heparin, algae have been the focus of growing interest in biomedicine because they are naturally sulfated and some studies have confirmed this activity.

Polysaccharides are one of the most important components of all living beings. They are present in a wide variety of organisms such as plants, animals and microorganisms in different forms and structures. They are long chain polymers of mono, di, oligo sugars linked by glycosidic bonds [2]. It is known that the introduction of sulfate group with a suitable degree of substitution can confer biological activity to a polysaccharide such as anticoagulant, antioxidant, antiviral and antiinflammatory action [1].

Given this reality, sulphated polysaccharides have been increasingly studied as anti-thrombotic agents and anticoagulants as an alternative to heparin. These polymers can be naturally or chemically sulphated and their sources can be seaweed, mushrooms, vegetables, and others. Thus, chemical modification of a polysaccharide is usually performed to improve the biological properties and/or create new functional properties. In particular, sulphation, where the hydroxyl of the polymer structure group is substituted by sulphate group, can impart a significant effect on the physiological functions thereof, and the increase or decrease of the degree of substitution and molecular weight can further enhance this effect (Figure 1) [3]. 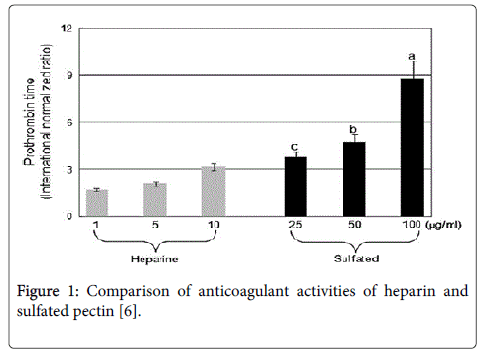 Figure 1: Comparison of anticoagulant activities of heparin and sulfated pectin [6].

The main sulfation method performed is O'Neill’s method, where the polysaccharide is initially solubilized in formamide and then pyridine is added to this solution. The amount of formamide and pyridine used is determined according to the optimal adaptation of the methodology. The formamide increases the dissolution of polysaccharide and remains inert in the reaction, while the pyridine, being a strong organic base, may nucleophilically attack the polysaccharide, weakening the H-O bond and facilitating the entry of the sulfate group. The mixture is then placed in an ice bath for the addition of chlorosulfonic acid dropwise, under stirring, at a ratio of 10 moles of acid for each mole of free hydroxyl polysaccharide. After the reaction, the mixture is cooled to room temperature and the pH is adjusted with NaOH solution. Subsequently it is dialyzed against water to remove the pyridine salt and potential degradation products. Immediately after, the lyophilization is carried out [2]. The degree of sulfation, established based on the sulfur content is what determines the percentage of sulfated polysaccharide.

In this review article, the objective is to show, the artificial sulfation plant polysaccharides can be an alternative to obtain substances with anticoagulant biological effect, and that chemical structure of the polysaccharides, such as the monosaccharide composition, molecular weight (Mw), degree and pattern of substituting groups and the sulfation method to play a vital role in influencing the anticoagulant activity.

Gracher [2] carried out the sulfation of the polymer composed of 100% mannose (Mn), with a molar mass of 500 mg, by the O'Neill method, giving the sulfated polysaccharide (PS) Mn-S1 molar mass 965 mg. The degree of substitution (DS) obtained was 1.66. Analysis of the molar mass of the two polysaccharides, crude and sulfated, was performed using size exclusion chromatography (HPSEC). The presence of the sulfate group was found to increase the molar mass of the starting molecule. In this work, the increase in the molar mass of the molecule was proportional to the increase in the anticoagulant effect since it was verified that Mn-S1 contains more extensive signs of overlapping than those of Mn, in addition, the increase of coagulation time happened because to activities of the thrombin in the coagulation cascade was inhibited. Comparing with heparin, the anticoagulant effect of Mn-S1 was lower, but it was found that using Mn-S1 at higher concentrations a similar effect can be achieved. Other studies that worked on chemical sulfation following the O'Neil method also demonstrated an increase in the biological activity of the sulfated molecule [4,5].

In Bae's article the chemical sulfation of citrus pectin was carried out by the method of Huang et al. [6]. In this method the pectin was mixed with formamide and chlorosulfonic acid at a temperature of 80-90°C for 4 hours. The precipitate, obtained by the addition of propylene oxide (50 ml), was collected and then suspended in distilled water, and soon after the pH was adjusted to 10-11. The resulting sample was dialyzed against distilled water for 24 hours and then lyophilized. The incorporation of sulfate groups in the pectin structure is probably responsible for the anticoagulant activity, since the native pectin did not present this activity. The sulfated derivative of pectin significantly prolonged prothrombin time and activated partial thromboplastin (TAP and TTPA), which can be explained by the anionic characteristics of the sulfated pectin, which interact with the positive charge of the coagulant proteins, increasing the anticoagulant activity. A decrease in the viscosity of the sulfated pectin was also observed, which may be justified by the increase in the negative charge and consequently also the repulsion between the molecules increased [6].

Drozd studied the relationship between the degree of sulfation and the anticoagulant activity of the starch extracted from Solanum tuberosum , with a molecular weight between 25,000-30,000 Da and a degree of sulphation of 0.4-2.5 and the inulin obtained from Helianthus tuberosus, with molecular weight between 7000-8000 Da and sulphation degree of 0.6-1.6. The antithrombotic activity of sulfated starch reached 16.8-70.0 IU/mg and the antithrombotic activity of sulfated inulin was 5.5-11.4 IU/mg. The increase in anticoagulant activity was proportional to the increase in the degree of sulfation for both polysaccharides [7].

Similar anticoagulant effects have been reported for other sulfated polymers such as gum obtained from partially ripe fruits of Aegle marmelos (BFG). In this paper, nine sulfated BFG (sBFG), with various degrees of sulfation (DS), were prepared by using CSA-Pyr method. The data summarized in paper suggested that moderate temperature of 70°C and prolonged reaction time of 2 h were optimum time for obtaining highest DS in sBFG-2 sample. The incorporation of sulfate groups into the gum structure appeared to be responsible for the anticoagulant activity since native gum hardly exhibited anticoagulant effect. sBFG-2 exhibited more than 4 min for APTT (activated partial thromboplastin time), when used in the concentration range of 50-100 g/mL [9].

In addition to DS, the molecular weight (Mw) of polysaccharide is another important parameter influencing biology activity. In this study, three kinds of sulfated derivatives of polysaccharides from persimmon fruits (PFP) were obtained, and named as PFP-SI, PFP-SII and PFPSIII. PFP-SI, PFP-SII and PFP-SIII had almost identical Mw, their DS were 0.8, 1.7 and 2.5, respectively. PFP-SIII had a higher APTT and TT activity than PFP-SI and PFP-SII. The anticoagulant activity improved with increasing DS, indicating that sulfate esters played a major role in the anticoagulation activity. With respect to molecular weight, the results suggested that the anticoagulant activity improved with decreasing the molecular weights. In this paper, the sulfated polysaccharide with the DS of 1.7 and the lowest Mw of 1.0 × 104 was best in the prolongation of APTT and TT. It was speculated that higher Mw of PFP sulfates could prevent them from interacting with coagulation cofactors and their target proteases [10].

Studies have demonstrated that chemical sulfation of pectins, including citrus pectin (CP), give products with anticoagulant properties, with the activity depending on the quantity of sulfate groups. Citrus pectin (CP) and its carboxy- reduced derivatives (CPCR1 and CP-CR4) were chemically sulfated, resulting in samples CP-S, CP-CR1S and CP-CR4S, according to the method described by O’Neill modified. In this study was demonstrated that the anticoagulant activity was dependent on the sulfation pattern of the polysaccharides. The sulfation patterns of the polysaccharides were determined by methylation analysis, where O-methyl substitutes the free hydroxyl groups. Sulfated hydroxyl groups are not methylated, allow in the determination of their position. As observed, chemical sulfation occurred preferably at 6-O-position over 3-O- or 2-O- positions, probably due to stereochemistry of CP-CR1 and CP-CR4. In this work, the proportion and/or distribution of 6-O-sulfated units may be crucial for the anticoagulant and antithrombotic effects of CP-CR1S and CP-CR4S. Moreover, sulfated citrus pectin (CP-S), which is devoid of 6-O- sulfated units, had low anticoagulant activity and has not antithrombotic effect [11].

Studies and applications of natural and sulfated polysaccharides are expanding in the pharmaceutical field, receiving remarkable attention as anticoagulants. The studies addressing the use of chemical sulphation to obtain molecules with anticoagulant effect are promising since, adapted and controlled by O'Neil methodology, it is possible to achieve the optimum degree of substitution compatible with the desired biological activity. It is observed that the sulfated polysaccharides search field as anticoagulants is large, since there is a wide variety of polysaccharides that have not yet been chemically sulfated and the possibility of obtaining new materials is endless. In addition, the number of articles found concerning this theme highlights the importance of this material in scientific and technological advancement in the area of drugs and materials.

Copyright: © 2016 Oliveira RCR, et al. This is an open-access article distributed under the terms of the Creative Commons Attribution License, which permits unrestricted use, distribution, and reproduction in any medium, provided the original author and source are credited.
Top