It is well established that certain lower economic groups in the United States are underserved by the medical community with limited access to specialists, a lack of early detection programs and inadequate preventive disease management [1]. In addition, there is abundant evidence that certain ethnic groups are more at risk for cardiovascular diseases [1-3]. To bridge this gap in medical service to these communities, technologies might empower non-physicians and PCPs to provide these required levels of services, if practical, accurate and cost-effective objectives can be met. This is the first report of the widespread, routine use of one such technology, volume plethysmography in underserved communities. VPS is deployable by medical aides in the primary care setting with speed, efficient and accuracy intended to achieve superior clinical care within the established workflow of busy clinics [4].

Lower extremity PAD affects between 8 and 18 million people in the United States [2]. PAD causes over 143,000 hospitalizations as well as over 40,000 amputations each year, and incurs an economic burden of over $4 billion per year to the United States health care system [3,5,6]. Despite its high prevalence and the high associated morbidity, mortality, and cost, PAD remains frequently underdiagnosed [7]. It is important that at-risk patients be screened with arterial testing for the diagnosis of PAD so that preventive measures can be initiated earlier [8]. Practice guidelines by the AHA and the ACC, and a position paper by the American Diabetes Association, recommend screening and early preventive care for patients with asymptomatic PAD [8,9]. Despite these guideline recommendations, a survey of primary care clinicians found that 68% of respondents did not perform measurements to detect PAD [7].

A retrospective analysis of the 1998-2006 Nationwide Inpatient Sample showed that the likelihood of amputations being performed during acute hospitalizations for PAD decreased from 29.7% to 20.3%. While this decrease of amputation rate was seen across all races, black and Hispanic patients remained at increased risk for amputation as compared to white patients [3]. Possible causes for the difference in healthcare outcomes between non-white and white patients may lie in the intensity of care available to each ethnic group, or possibly in different responses of each ethnic group to similar care [3]. A detailed analysis of risk factors for amputation revealed that the odds ratios for amputation were significantly (P<.0001) increased for non-white patients (1.91, 95% confidence interval [CI], 1.65, 2.20), low- income patients (1.41, 95% CI, 1.18, 1.60), Medicare and Medicaid recipients (1.81, 95% CI, 1.66, 1.97), as well as for patients of non-teaching institutions (1.17, 95% CI, 1.08, 1.30) [1]. This study identified presentation with advanced disease, including the gangrene, lower socioeconomic status, and lack of access to tertiary care centers, as contributing factors to the increased amputation risk for non-white patients [1]. A review of 3,085 lower extremity amputations and 8,409 lower extremity bypass operations from the National VA Surgical Quality Improvement Program (NSQIP) and from the Veterans Affairs Patient Treatment File (PTF) identified black and Hispanic race as an independent risk factor for lower extremity amputation, even after correction for the increased burden of arteriosclerotic risk factors such as diabetes and hypertension in these minority populations [10]. Taken together, these findings suggest that ethnic minority populations are at increased risk for poor outcomes of PAD due to inadequate diagnosis and treatment by the healthcare system, beyond any contribution from predisposing cardiac risks. The intensity of vascular care provided to patients at risk for amputation varies widely across the United States. Outpatient diagnostic and therapeutic procedures, as well as revascularization procedures, is inversely correlated with amputation rate [11]. This finding indicates that systematic efforts to improve vascular care for high risk patients residing in regions in which only low-intensity vascular care is available may lead to a reduced amputation risk [11]. Moreover, in patients with critical limb ischemia (CLI), who are at risk for amputation, an aggressive approach to anatomical screening and revascularization led to an increased rate of revascularization, and is associated with high rates of amputation free and overall survival [12]. Despite the known benefits of early diagnoses of PAD, a review of Medicare claims between 2000 and 2010 showed that only 68% of patients who underwent limb amputation had received some type of arterial testing [13]. Thus, anatomic testing of minority patients for PAD is an important, but often missed opportunity to prevent amputations.

The AHA and ACC currently recommend testing for all patients over 65 years old and all patients over 50 years old who report cardiac risk factors such as hypertension, hyperlipidemia, diabetes mellitus or a history of smoking [14]. It is now routine practice among many primary care practices to evaluate their patients according to the AHA/ACC recommendations using an FDA-cleared, VPS to evaluate upper and lower extremities for the presence of PAD [15]. The system is an easy to use, accurate and faster test when compared with alternative tests such as blood pressure cuffs with Doppler ultrasound systems [16].

The aim of the present study was to report on the feasibility of testing all patients who reside in an underserved community and who meet the AHA/ACC criteria for testing for PAD, using the VPS designed for this indication. VPS is a blood volume waveform visualization and evaluation system that can identify flow obstructions in the lower extremities including in the anterior tibial arterial and posterior tibial arterial distributions. It is performed in less than 5 minutes by routine office staff using a digital transducer placed sequentially on the extremities without bulky cuffs, experienced technical personnel, or the time required by current standard ABI Doppler systems [4,17]. This specialized VPS is intended to provide PCPs and other clinicians with an accessible test for use in the office or home setting that is accurate and reproducible. Studies have demonstrated the relative ease and speed in the detection of flow obstruction when in the hands of generalists and their routine office staff [4,17].

From August 2017 through December 2017, a cohort of 1,901 consecutive patients who met the AHA/ACC criteria for PAD testing were evaluated for the presence/absence and severity of PAD at 22 primary care practices located in underserved communities of the Midwest that serve a predominately lower-income, non-white population. All patients had completed a self-administered questionnaire to identify PAD symptoms, age and cardiovascular risk factors. Each evaluation was conducted by a medical aide without the need for a vascular technologist or physician present. The test was performed bilaterally on both upper and lower extremity arteries using the FDA-cleared, VPS [15,16]. The test results were interpreted in terms of presence and degree of flow obstruction, with flow obstructions of 0.60-0.89 rated as moderate, 0.40-0.59 rated as significant, and 0.00-0.39 rated as severe. The PCP made the diagnosis of PAD based on the test results and clinical judgment.

All data were de-identified and stored in a database archive. No private information was accessed. No identities were shared. As such, this retrospective analysis did not require an approval of an Institutional Review Board and no application for such approval was submitted.

The medical aides who performed the tests included the clinical factors on the test report forms based on the questionnaires completed in the examination room by the patients. There was no protocol in the study to collect such data in a manner suitable to enable statistical analyses such as investigating for confounding factors, or to compare sub-populations within the study. There were no data collected on patients who did not meet the ACC/AHA criteria for testing, including how many were in this category that did not meet the criteria.

Medical aides successfully tested 1,901 patients in the primary care setting who met the ACC/AHA criteria. All patients completed the testing. Of the 1,901 patients, 713 (37.5%) were identified as having moderate to severe PAD (Figure 1). 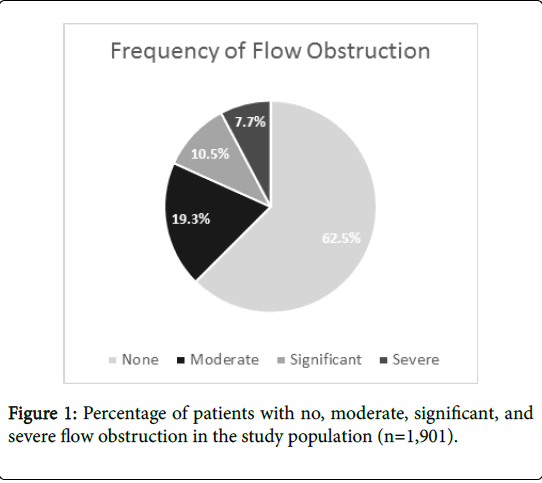 Figure 1: Percentage of patients with no, moderate, significant, and severe flow obstruction in the study population (n=1,901).

Patients in the study group were frequently hypertensive, hyperlipidemic, diabetic, and/or had a history of tobacco smoking. The frequency of the cardiovascular risk factors and co-morbidities that were reported for these patients is shown in Table 1.

Table 1: List of risk factors and comorbidities identified in the study cohort, with number and percentage of patients with each comorbidity. Abbreviations: CAD=history of coronary artery disease; TIA=history of transient ischemic attack.

This is the first report on the clinical feasibility of using a volume plethysmography system (VPS) operated by a medical aide in the primary care setting to do PAD testing on all patients in an underserved community who meet AHA/ACC criteria. Testing was conducted for a cohort of 1,901 primary care patients who reside in areas where only low-intensity vascular care is routinely provided for PAD, and who met the AHA/ACC criteria for testing for PAD. The data demonstrate that testing all eligible patients for PAD in primary care is feasible with a VPS operated by medical aides. Generally, VPS testing was completed in less than five minutes per patient and integrated well into the workflow of the primary care clinic. Although no formal survey of the 22 medical clinics and staff was undertaken to confirm these facts, calls to tech support, a service available to each provider, were rare.

The data demonstrated that patients in the cohort had high rates of cardiovascular risk factors and co-morbidities, which was anticipated from evidence from many studies that have used conventional PAD testing equipment operated by vascular technologists and specialists. Testing in primary practice revealed that, among patients meeting the AHA/ACC criteria for testing, over one third had flow obstructions, although the frequency of claudication was less than 10%.

These results suggest that volume plethysmography has critical advantages over other common methods of diagnosing PAD. Since claudication occurs only in a relatively small proportion of patients with new PAD, relying on a history of claudication is likely to miss 85%-90% of new PAD diagnoses [18]. Similarly, basing the diagnosis of PAD on the absence of a pedal pulse misses the diagnoses of PAD in about two thirds of cases [19].

When a referral by a PCP to a specialist is made based on symptoms or physical exam, the initial evaluation performed in specialized clinical settings is usually a test with blood pressure cuffs and Doppler ultrasound, which represent the diagnostic gold standard, and expose the inadequacy of the physical examination and symptomatology to detect PAD [20].

A disproportionate number of people belonging to racial and ethnic minority groups suffer the sequelae of untreated PAD. The likely causes are inadequate early diagnosis, lack of preventive measures and lack of access to specialty care. In recognition of the need to address these problems by PCPs, this testing program followed AHA/ACC recommendations to identify PAD earlier in the disease course in populations at risk. The findings reported here demonstrate that about one third of the patients eligible for testing under the ACC/AHA recommendations had flow obstructions, and that VPS can be effectively utilized by primary care clinicians in poor and underserved communities to identify PAD.

Following the AHA/ACC recommendations for testing in at-risk communities is an essential step towards enabling better and timelier preventive care. Using a PAD evaluation program that allows for detection and management of PAD earlier in the disease process can be an important step towards filling the unmet need of higher intensity vascular care for minority populations.

This report is a retrospective analysis of de-identified data that was collected during routine clinical practice. The medical aides who performed the tests included clinical characteristics on the test report forms based on patient self-reporting on questionnaires. There was no protocol to enable statistical analyses for confounding clinical factors or for sub-populations within the cohort. In addition, there was no protocol to report on patients who did not meet the ACC/AHA criteria and thus did not require VPS testing. Also, there was no protocol to record of ethnic or other identifying data regarding each patient. This report is limited to describing the test findings and self-reported clinical characteristics in the population tested.

Copyright: © 2018 Rodriguez M. This is an open-access article distributed under the terms of the Creative Commons Attribution License, which permits unrestricted use, distribution, and reproduction in any medium, provided the original author and source are credited.