In this paper, a new high molecular weight 4-arm star polymethylmethacrylates (PMMA) is synthesized by a “core-first” method. The process is as follows: tetra-functional initiator is synthesized by esterification reaction of ethylenediamine-N,N,N',N'-tetra-2-propanol. The reaction creates a new core that is used as an initiator and employed in the homogenous atom transfer radical polymerization (ATRP) of MMA monomer. The ATRP process is carried out in presence of CuBr as a catalyst and 2,2'-bipyridine ligands to synthesize star polymers with high conversion, low polydispersity and nearly monomodal molecular distributions

Star polymers have attracted lots of attention due to their unique properties in bulk and solution [1-7]. Their synthesis are classified as: "arm first" and the "core first" methods [8,9]. In the arm first approach, preformed arms was prepared by living polymerization, reacted with a multifunctional coupling agent as the core [10,11], but in the core first method, a multifunctional core/initiator, initiate living polymerization to produce star polymer [12,13].

In the past, star polymers were mainly synthesized by living anionic [14,15] and cationic polymerization [16-18], but the strict reaction conditions and monomer selections, limit their application [14,19]. Significant attempts have been devoted to developed living/controlled polymerization based on free radical chemistry, among them controlled radical polymerization (CRP) methods [20] have been demonstrated as an effective route for preparing new polymers such as star polymers.

ATRP is probably the most robust and efficient CRP to produce well-defined polymers with controlled topology, composition and functionality [21-24].

This polymerization method is an effective technique for the design and preparation of multifunctional, nanostructured materials for a variety of applications in biology and medicine [25].

ATRP is a particularly successful CRP that has attracted commercial interest [26] because of its easy experimental setup, use of readily accessible and inexpensive catalysts, [27] and simple commercially available or easily prepared initiators.

Control of Alkyl bromides as ATRP initiators for acrylates, was gained through metal-mediated halogen atom transfer [28].

In this article, we report that the synthesis of 4-arm star polymers using new initiator based on ethylenediamine-N,N,N’,N'-tetra-2-propanol, esterified with 2-bromopropionyl bromide for the atom transfer radical polymerization (ATRP) of methyl methacrylate (MMA) in the presence of Cu(I)Br and 2,2'-bipyridine. All polymers have been characterized by FT-IR, 1H-NMR, elemental analysis and GPC.

The purpose of this paper is the synthesis of star polymers for specific characteristics such as spherical shape, small size, large surface, high mobility and the stability and uniformity of these polymeric materials. We synthesize a new initiator by esterification of ethylenediamine-N,N,N',N'-tetra-2-propanol, with 2-bromopropionyl bromide. Then this core, as a bromide initiator, initiates the polymerization of MMA monomers in the presence of Cu(I)Br and 2,2'-bipyridine ligands to produce PMMA polymers.

The multi-dentate nitrogen-based ligands are very useful in the copper-mediated atom transfer radical polymerization for bonding constant and electronic effects.

However, In other paper, substituent 2,2'-bipyridines were investigated for atom transfer radical polymerization (ATRP) of methyl methacrylate (MMA) [29].

Solvents and chemical materials were purchased from Fluka (Switzerland) and Merck (Germany) chemical companies. Methyl methacrylate, was passed through a basic activated alumina column, extracted 3 times with 5% wt NaOH (aq), washed with deionized water and dried by using anhydrous MgSO4, and finally distilled from CaCl2 just before use.

Ethylenediamine-N,N,N',N'-tetra-2-propanol (14.7 mmol, 4.3 g), triethylamine (36.8 mol, 8.73 ml), and CH2Cl2 (100 ml), were charged into dry 250 ml three-neck round-bottom reaction flask and stirred at 0oC under N2 for 1hr, immediately 2-bromopropionyl bromide (0.015 mmol, 8 ml), was added, and the solution was stirred at room temperature overnight, then filtered and extracted with saturated Na2CO3 (aq) and CH2Cl2, 2 times; the organic phase was dried over anhydrous magnesium sulfate. The solution was concentrated and vacuum-dried to produce colorless liquid. Yield: 84%; Rf = 0.89 (60/40 cyclohexane / ethylacetate).

General procedure for the synthesis of star polymer by ATRP

Star PMMA (0.5 g) was dissolved in a mixture of methanol (25 ml) and KOH solution (5%, 3 ml). The mixture was refluxed for 72 hr at 60oC. The organic phase was extracted with chloroform and dried over anhydrous magnesium sulfate. The polymer was precipitated in methanol, filtered and washed with water to obtain hydrolysate arms of star PMMA.

In this study, two star PMMAs were synthesized via ATRP. (Figure 1) outlines the synthesis of a tetrafunctional initiator, and its use in the preparation of 4-arm star PMMA. The initiator was synthesized by esterification reaction of ethylenediamine-N,N,N',N'-tetra-2-propanol with 2-bromopropionyl bromide. 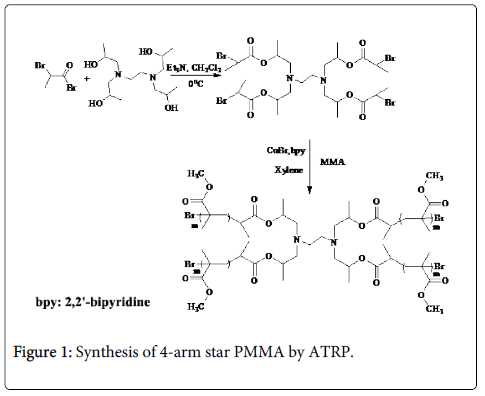 4-arm star PMMA were successfully synthesized by ATRP using ethylenediamine-N,N,N',N'-tetra-2-propanol tetrakis (2-bromopropyonyl bromide) as the initiator, CuBr as the catalyst, and 2,2'- bipyridine as the ligand at 110oC in xylene (Figure 1).

The reaction must be operated in inert atmosphere to avoid termination of living polymerization due to CuBr oxidation.

Figure 2 (a,b) shows the GPC traces of hydrolyzed star polymers. The Mn of the hydrolyzed star polymers is about 1/4 times as much as that of original 4-arm star PMMA. The Mws were close to theoretical values, and the polymers had very narrow PDI. Since, GPC traces achieved from hydrolyses of star polymers and the standards in GPC calculation are polystyrene with different molecular weights, some logical difference can be seen in the quantities of Mn and M (calcd). Both GPC traces were monomodal and indicate that the ATRP of MMA has controlled/living characteristics (Table 1). 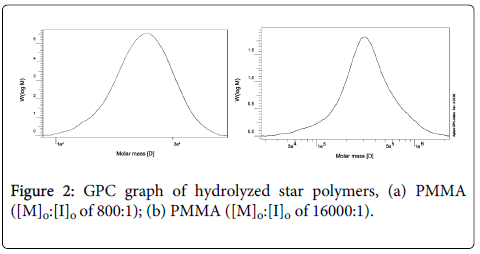 The NMR spectra and GPC analyses demonstrated the formations of 4-armed star polymer. The 1H-NMR is employed to analyze the structure of star PMMA (Figure 3). The signals at 0.88-1.24, 1.84-3.63 ppm, represented methyl groups, methylene groups, and methoxy groups, respectively. 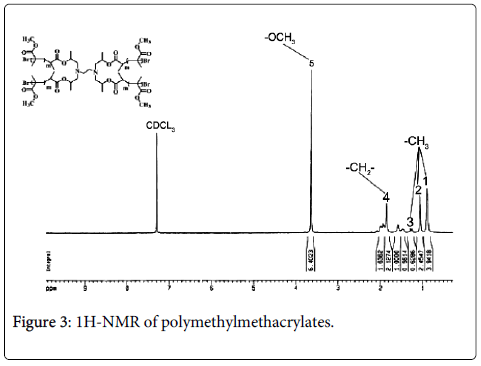 It should be noted that the characteristic carbonyl band is clearly detected by FT-IR spectroscopy due to the polymer chain.

Finally, (Figure 4 and 5) depict SEM and TEM micrographs of high molecular weight star PMMA. Particle morphology is confirmed to be spherical and near mono-disperse in particle size, as expected. Therefore, due to the size and size distribution of the polymer, they could be used as mono-sized polymer additive for lots of the applications [30]. 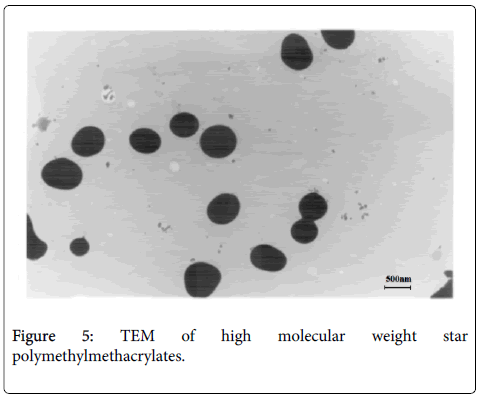 Because the important role of initiator in ATRP, we used the new initiator (Core) with a-haloester units because of its selective and quick halide radical immigration in the ATRP polymerization reaction. Also, because of suitable bonding constant and electronic effects of bidentate nitrogen-base ligand (2,2'-bipyridine), it successfully stabilizes transition metal salts (copper catalysts) in organic phase of the ATRP of MMA monomers. So, Multifunctional new initiator containing a-bromo-ester units as the core were synthesized and initiated atom transfer radical polymerization of MMA, for the synthesis of star polymers with well-defined structures.

Star polymers have special characteristics such as: due to spherical shapes and high surface of these polymers, they are very useful like erosive materials that have many usages in drug delivery and various other applications.

We wish to express our gratitude to the Research Affairs Division of Isfahan University of Technology (IUT) for their financial support. Further financial support from National Elite Foundation (NEF) Iran Nanotechnology Initiative Council (INIC) and Center of Excellency in Sensors and Green Chemistry Research (IUT) is also gratefully acknowledged.

Copyright: © 2014 Abdolmaleki A, et al. This is an open-access article distributed under the terms of the Creative Commons Attribution License, which permits unrestricted use, distribution, and reproduction in any medium, provided the original author and source are credited.
Top