Understanding brain activity during walking and imagined walking is critical for accurate design of brain computer interfaces (BCIs) for patients with limited or no mobility. Functional magnetic resonance imaging (fMRI) has great potential for this purpose; however, during imaging, subjects must remain in a supine position, which limits studies to simple leg movements that minimize head motion such that fMRI data are not contaminated by signal artifacts. Here, we describe the design and testing of an MR-compatible apparatus that allows subjects to perform leg movements that closely resemble the kinematics of normal walking with minimal head motion.

Walking is an intricate sensorimotor and cognitive task that involves the interaction of a number of dynamic processes in the brain, spinal cord and limbs [1]. An understanding of these interactions, the brain’s activity during walking, is important when considering the design of brain-computer interfaces (BCIs) for individuals who have lost function of their legs and are unable to walk. One technology that has potential for this purpose is functional magnetic resonance imaging (fMRI), which indirectly measures neural activity throughout the entire brain at millimetre spatial resolution, by assessing localized increases in blood flow during tasks [2].

However, fMRI requires individuals to be in a supine position within a spatially confined environment (i.e., inside the MR scanner) during brain imaging. This poses several unique challenges to the study of brain activity during walking: supine rather that upright body position; mimicked stepping motions rather than true walking movements; and excessive head motion that occurs during leg movements in a supine position, leading to fMRI signal artifacts.

The biomechanics and kinetics of flexion and extension at the knee joint in a supine position have been investigated previously [3,4]. However, no studies have attempted to assess the kinematic features of such movements for the purposes of determining if they are a suitable proxy for walking or for stepping. Several apparatus designs have been proposed to allow simple leg movements while inside an MR scanner, including a single-leg, ankle flexion and dorsiflexion device [5,6] and a single-leg movement weight-resistant pulley system (to simulate the effects of gravity) [7].

Yet, because walking incorporates movement of the lower body at the hip, knee and ankle, these designs are limited in their ability to comprehensively examine the kinematics of simulated walking. A bipedal device that allows for hip, knee and ankle movement has been proposed [8]. However, the design requires several pneumatic pressurized cylinders to offer resistance, which is costly and makes the device somewhat cumbersome for MRI purposes.

These issues thus require a novel design of an apparatus to permit leg movements inside the MR environment that closely mimic walking and minimize any detrimental impact on brain image quality. We have designed an apparatus to meet these challenges. The apparatus is: 1) made of MRI-compatible materials; 2) cost-efficient; 3) light-weight and durable for easy insertion into and removal from the MR environment; and 4) permits stepping movements that closely mimic the kinematics of natural walking, with minimal head motion.

Table 1 shows the pre-design maximum head displacement for each participant, averaged over the five right leg movement trials, at each pace.

Head displacement exceeded 2 mm for all rates of movement and in all directions, with greatest displacements along the x-axis (i.e., in the sagittal plane), but was least for a stepping rate of 50 steps/min. During supine leg movements using the LAMRI inside the MR scanner, head movement was less 2 mm in all direction (Table 1). 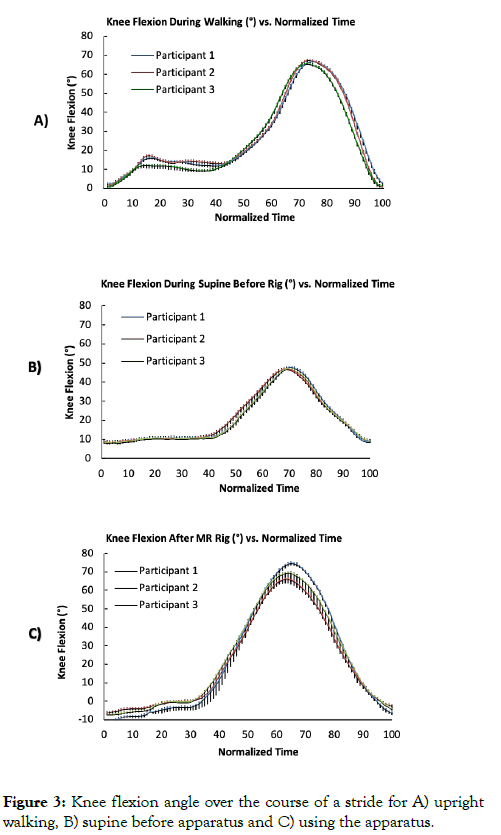 Figure 3: Knee flexion angle over the course of a stride for A) upright walking, B) supine before apparatus and C) using the apparatus.

Upon further visual inspection it was noted that executed walking also had a small peak at 15%, which was associated with lifting of the leg at the initiation of the stride. Supine knee flexion angle as a function of time using the LAMRI (outside the MR scanner) is shown in Figure 3C.

Visual inspection shows that maximum knee flexion angle, time of maximum angle, as well as the presence of an initial small peak at the beginning of the motion, all closely resemble that of upright walking as shown in Figures 4A-4C. An MR-compatible device was constructed to permit simulated stepping while lying inside an MR scanner. The design significantly reduced head movement during stepping tasks and generated knee flexion kinematics that were more similar to that of upright walking than without the apparatus. The MR apparatus was intentionally designed to be modular so it could be adjusted for people of different heights and weights. The MR apparatus allows for hip, knee and ankle flexion/extension; thus, it can be used to assess all three actions associated with stepping. This design offers a relatively inexpensive means to use fMRI to study brain activity associated with lower body flexion/ extension that mimics stepping.

The study, however, had some limitations. The calculation of the knee and hip joint centers were somewhat subjective. Tylkowski ’ s method is cited as being more accurate than Andriacchi’s; however, it is still associated with approximately 1.90 cm of discrepancy from true radiographic hip joint center [9]. A combination of Tylkowski’s and Andriacchi’s method is superior to either one alone. This combined approach uses Tylkowski’s frontal plane proportions and Andriacchi’s sagittal plane ones, generating hip center results within 1.07 cm of the true radiographic hip joint center [9-13].

Only the right step was analyzed for similarity between upright walking and supine knee flexion. Given the symmetry at the knee joint during walking, it is likely that similar findings would be obtained for the left leg comparisons. In addition, data were collected on a small sample of young, healthy males, possibly limiting the generalizability of the findings to older or female populations.

Fabrication of the MR apparatus device would not have been possible without the assistance of machinists Peter Byrne, Dan Pittman and Donald Kline. This work was made possible by the following funding sources; Alberta Innovates Technology Future (AITF), Canada Innovates Health Research (CIHR) and National Science and Engineering Research Council (NSERC).

Copyright: © 2020 Kline A, et al. This is an open-access article distributed under the terms of the Creative Commons Attribution License, which permits unrestricted use, distribution, and reproduction in any medium, provided the original author and source are credited.