Inhibition of α-glucosiase and the associated reduction of glucose absorption is an attractive approach for decreasing postprandial hyperglycemia and for the discovery of potent antidiabetic agents. One of the most important sources of potential α-glucosiase inhibitors represents the class of polyphenols. This paper aims to evaluate previous herbal polyphenol-rich extracts plan on the management of diabetes mellitus, to address their α-glucosidase inhibitory activity. Polyphenol-rich extracts from thirteen widely used traditionally anti-diabetic plants in Asia and Mediterranean regions were evaluated for their potential α-glucosidaseinhibitory activity. Among these evaluated plants, 10 were much stronger than that of acarbose standard. Punica granatum manifested the highest inhibitory activity with IC50 at 3.59 ± 0.11 μg/mL, followed by Psidium guajava with IC50 at 8.08 ± 0.10 μg/mL and Cinnamomum zeylanicum with IC50 at 9.87.08 ± 0.14 μg/mLA. A high correlation (r=0.65, p<0.001) was observed between α-glucosidase inhibition and total phenolic content of all plants. Punica granatum, P. guajava, C. zeylanicum and Ziziphus spina-christi had also the highest total phenolic content. Extracts for the above studied plant species may potentially replace acarbose in its current clinical use in improving post-prandial glycaemic control in type 2 diabetics. As a result, these polyphenol-rich extracts potentially offer a complementary approach to develop functional food and potential antidiabetic agents.

Diabetes, a multifactorial disease affecting over 347 million people worldwide, is characterized by hyperglycemia resulting from defects in insulin secretion, insulin action, or both [1]. Diabetes not only kills, but is a major cause of adult blindness, kidney failure, gangrene, neuropathy, heart attacks, and strokes. There has been a striking emergence of noninsulin- dependent diabetes mellitus (type 2 diabetes) as a major health problem in populations undergoing modernization of life-style, both in developing nations and in developed countries. Over 90% of patients with diabetes have type 2 diabetes, while the remaining has type 1 diabetes [1].

α-Glucosidase inhibitors are a class of drugs used to treat noninsulin dependent diabetes by inhibiting α-glucosidase (EC 3.2.1.20, α-D-glucoside glucohydrolase), a membrane-bound intestinal enzyme that catalyze the hydrolysis of the α -glycosidic bond of oligosaccharides to liberate glucose. Liberated glucose is absorbed from the intestine and contributes to postprandial hyperglycemia. α-Glucosidase inhibitors prevent or delay the hydrolysis or absorption of carbohydrates and reduce post prandial hyperglycemia, making such inhibitors useful in the management of type 2 diabetes [2]. Currently, acarbose, voglibose and miglitol are three such α -glucosidase inhibitors used clinically to control blood glucose levels of patients, although they can cause negative gastrointestinal symptoms [3,4].

Published surveys indicated that more than 1200 plants are used worldwide in traditional medicine for their alleged hypoglycemic activity [5,6]. A study on traditional herbal remedies for diabetes may provide valuable leads for the development of alternative drugs and therapeutic strategies [6]. The popular hypoglycemic drug glucophage (metformin), for instance, is derived from Galega officinalis [7] (Table 1).

Table 1: Common plants used for the treatment of diabetes.

Since polyphenols possess multiple biological activities and constitute an important part of the human diet, they have recently emerged as critical phytochemicals in type 2 diabetes prevention and treatment. Their hypoglycemic action results from their antioxidative effect involved in recovering of altered antioxidant defenses and restoring insulin secreting machinery in pancreatic cells, or abilities to inhibit the activity of carbohydrates hydrolyzing enzymes (α-amylase and α-glucosidase) [4].

In addition, some flavonoids and polyphenols as well as sugar derivatives (acarbose) are found to be effective in inhibiting α-glucosidase [4,8-12]. Therefore, discovery of α-glucosidase inhibitors from traditional plants is very helpful in the development of new antidiabetic drugs.

The objective of this research was to investigate the α-glucosidase inhibitory activity of the most widely anti-diabetic plants that used traditionally in Asia and Mediterranean regions for treatment of diabetes. Most of medicinal herbs evaluated in this study are used traditionally as anti- diabetic plants and were selected here on the basis of their use in traditional medicines throughout Asia and Mediterranean regions moreover they previously were found to induce hypoglycemic activity in experimental animals. These plants are shown in Table 2. Extracts of these plants were tested for their inhibition of α -glucosidase. Moreover, the relationships between phenolic compounds and biological effects were investigated.

Table 2: Scientific names, part uses and yields of the plants collected in this study.

Dry samples of selected plants were purchased in a local market, Al Ain, UAE. The authentications of the plants were carried out at the Herbarium of the Department of Biology, UAE University, Al Ain, UAE. The α-Glucosidase enzyme from Saccharomyces cerevisiae, 4- nitrophenyl α -D-glucopyranoside and acarbose were purchased from Sigma–Aldrich Chemical Co. (St. Louis, MO, USA). Unless stated otherwise, all chemicals used were of analytical grade and were purchased from Sigma Chemical Co. (St. Louis, MO, USA).

Preparation of the plant extracts

A ground aerial part sample of 10 g was extracted with 70% (v/v) aqueous ethanol (200 mL). The mixture was macerated for 72 h at 4°C. The resulting compound was then filter dried under reduced pressure in a rotary evaporator at 40°C. An aqueous ethanol crude extract was generated. This crude extract was weighed, dissolved in DMSO (typically 200 mg/mL) and kept at -80°C for further analysis.

α-Glucosidase enzyme was stored at -20°C. A stock solution of 1 mg/mL (mg=55 U) in 100 mM potassium phosphate buffer, pH 6.8 was prepared and diluted to 0.5 U/mL at the time of assay with the same buffer. The extract (0-200 μg) were dissolved in DMSO and further diluted to the desired concentrations with buffer. The final DMSO concentration was maintained below 2% v/v, which was found not to have any effect on enzyme activity.

The α-glucosidase enzyme inhibitory assay was performed in a 96 well plate as described earlier [12]. α-Glucosidase (25 μl, 0.5 U/ml) in 100 mM potassium phosphate buffer (pH 6.8) were mixed with 25 μl of test sample. Acarbose (1 mg/ml) was also assayed as a standard reference and incubated at 25°C for 15 min. After the incubation 25 μL of the substrate 4-nitrophenylα-D-glucopyranoside (1 mM concentration in 100 mM potassium phosphate buffer, pH 6.8) was added to the mixture. The enzymatic reaction was allowed to proceed at 25°C for 10 min and was stopped by the addition of 100 μL of 0.2 M sodium carbonate. Nitrophenol absorption was measured at 405 nm using an Elisa Reader. The percent inhibition of α-glucosidase was calculated as {1-(Abs sample-Abs blank)/Abs control} × 100, where Abs sample represents the absorbance of the experimental sample, Abs blank represents the absorbance of the blank, and Abs control represents the absorbance of the control.

Total phenolics were assessed using the method described by ref. [13] using the Folin-Ciocalteu reagent. For a typical plant extract, a sample of the residue obtained from the crude extract described in the section above (100 μL) was thoroughly mixed with the Folin-Ciocalteu reagent (200 μL) and de-ionized water (2 mL). An incubation period at room temperature for 3 min followed. After incubation, a sample of 20% aqueous sodium carbonate (w/w, 1 mL) was added to the mixture. After one hour of incubation at room temperature, the total polyphenols were determined by measuring the absorbance of the resulting substance at 765 nm with a PerkinElmer, Lambda 25 UV/VIS spectrophotometer. Values were expressed in milligrams of gallic acid equivalent per gram dry weight of plant species extract. Data presented here are averages of three replicates.

An important target for the treatment of diabetes includes the development of inhibitors of nutrient digestion and absorption. Inhibition of α-Glucosidase and the associated reduction of glucose absorption is an attractive approach for the discovery of potent agents. α-Glucosidase, a key enzyme for carbohydrate digestion, has been recognized as a therapeutic target for modulation of postprandial hyperglycemia, which is the earliest metabolic abnormality to occur in type 2 diabetes [4]. Currently, the only clinically approved pharmacologic agent as α-Glucosidase inhibitor is acarbose [3]. One of the most important sources of potential α-Glucosidase inhibitors represents the class of polyphenols. The consumption of inhibitors naturally from constituents in the diet could be an effective therapy for managing postprandial hyperglycemia with minimal side effects in contrast to traditional treatments with drugs such as acarbose [4].

The ability of ethanol extracts of the evaluated plants to inhibit α-Glucosidase is shown in Figure 1. The effectiveness of enzymatic inhibition of the extracts was determined by calculating IC50. The lower the value, the higher the quality of enzymatic inhibition. The IC50 of the 13 plants selected in inhibiting α-glucosidase ranged from 3.59 to 303.30 μg/mL. Punica granatum (pomegranata) had the highest inhibitory activity with IC50 at 3.59 ± 0.11 μg/mL followed by Psidium guajava (Guava) with IC50 at 8.08 ± 0.10 μg/mL, and Cinnamomum zeylanicum (Real cinnamon) with IC50 at 9.87.08 ± 0.14 μg/mL. Among these evaluated plants 10 were much stronger than that of acarbose (IC50=203.03 ± 3.77 μg/mL), whereas Trigonella foenum ethanol extract (IC50=303.03 ± 3.86 μg/mL) showed weaker inhibitory capacity compared with that of acarbose. Figure 2 show that these extracts caused a dose dependent inhibition of α-Glucosidase activity. 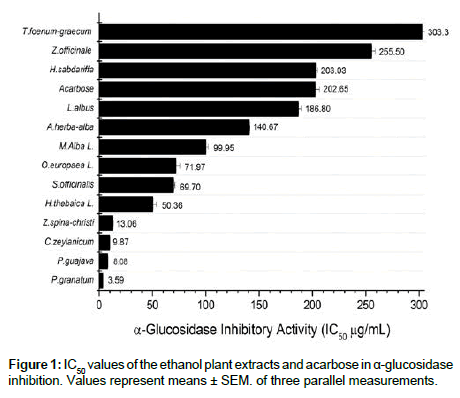 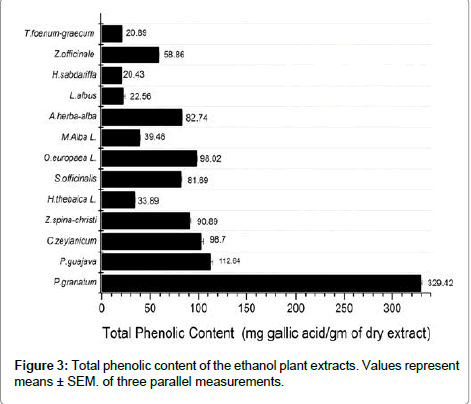 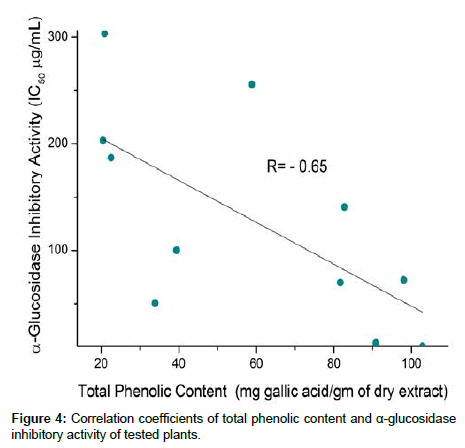 The inhibitory activity of these polyphenol-rich plant extracts towards α-glucosidase offers the potential for type 2 diabetics to manage their own glycaemic control via dietary means. Furthermore, these findings validate traditional knowledge and suggest that these polyphenol-rich plant extracts may potentially offer a complementary approach to develop functional food and potential antidiabetic agents. However, further confirmatory studies both at preclinical and clinical levels are needs to be required.

Copyright: © 2015 Hamza AA, et al. This is an open-access article distributed under the terms of the Creative Commons Attribution License, which permits unrestricted use, distribution, and reproduction in any medium, provided the original author and source are credited.
Top