Background: A triterpene glycoside fraction was isolated from methanolic extract of Holothuria floridana inhabiting in shallow waters of the south-western marine insular platform of Cuba archipelago.

Methods: The fraction was separated chromatographically on Amberlite and was isolated a triterpene glycoside. Its structure has been deduced, in a preliminary study, from spectral analysis (NMR, FTIR) and chemical evidence (chromogenic reactions).

Results and conclusions: The compound is an open-chain, holost-Δ 9,11-en-12 α,17 α, 22 ξ triol tetraoside, belonging to the group A of the holoturins, which possesses 3 β-D-glucose, D-xylose, D-quinovose and 3-O-methyl-Dglucose as monosaccharide fragments.

Holothurians (Echinodermata, Aspirochirotida, Holothuridae, Holothuria), are marine invertebrates with a wide geographical distribution which are used for human consumption [1,2]. Sea cucumbers or holothurians, epibenthic organisms with low mobility [3], have been reported to have an extraordinary variety of metabolites [4,5]. specifically triterpenic glycosides [6] of holostane type (lanostane) with a characteristic structural function of D-ring fused to a γ-lactone unit and a chain of sugars with up to six units of monosaccharides [7,8] with or without sulphate substituents.

Triterpenic glycosides, also denominated saponins, the major secondary metabolites of Holothurians possess a great molecular diversity and are, structurally, considered responsible for their cytotoxicity and a characteristic biological activity [9-14]. It is being used as pharmaceutical preparations, potential antitumour and antimicrobial treatment, or nutritional additives [15-19]. The basic structures (a,b) of these holostane-type molecular systems [20] are represented in Figure 1 (without monosaccharide units in C-3OH). 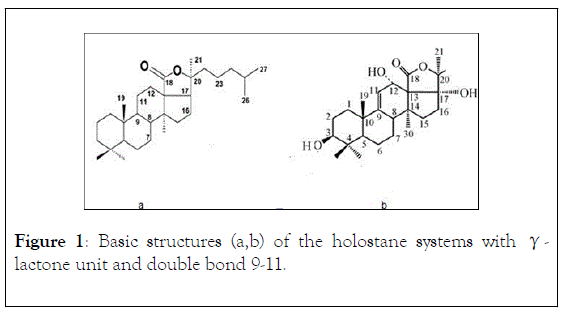 As a continuation of our studies related to the investigations in applied chemical ecology about secondary metabolites, isolated from marine invertebrates that inhabit in tropical insular conditions in the photic zone of the Cuban archipelago, the present work is intended to develop the preliminary chemical study of holothurians (sea cucumbers) that inhabit the shallow waters of the south-western marine insular platform of Cuba and report a preliminary structural details of a triterpenic holostanic glycoside isolated from methanolic extracts of Holothuria floridana [21-23].

The individual specimens (voucher No. 01-2012, M.Sc. Irma Alfonso, Ex-Fisheries Research Institute, Cuba) were collected, by scuba diving, in August 2012 in the Gulf of Batabanó (Figure 2) on the southern insular platform, at a depth of 2.5-3.5 m, from offshore waters of Diego Pérez Island, subsequently, they were deposited in the Chemical Engineering and Research Center, CIIQ, of the Ministry of Basic Industry of Cuba, MINBAS, and taxonomically identified by M.Sc. Irma Alfonso. Collected individuals were refrigerated and stored at -25°C until use. 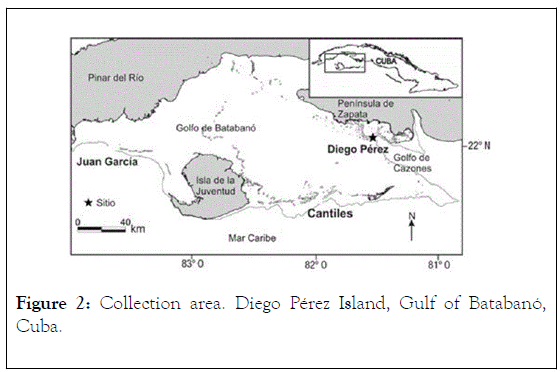 The individuals collected (between 20 and 30 cm in length and up to 160 grams in weight), after cooling, were dried and cut into small fragments and subjected to extraction processes according to the described general methodology, considering the strategies of structural elucidation previously reported [20]. The extracts were prepared as follow [22]: 200 g of frozen dry material are homogenized in deionized water-methanol under constant stirring in the dark at 40°C for 36 hours. The mixture is centrifuged at 5000 rpm and the supernatant is collected and stored at -300°C. 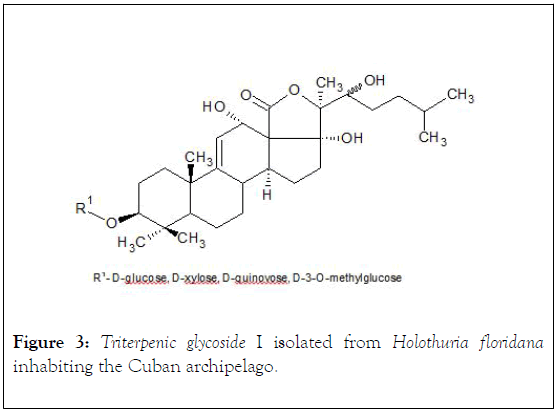 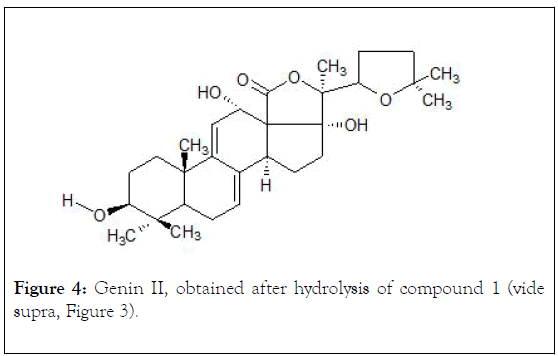 Regarding the qualitative determination of the monosaccharides, formed during the hydrolysis, the glycoside I, sugars were analyzed by thin-layer chromatography (silica gel plates Si 60-F254 (Germany, 10 cm × 20 cm) impregnated with 0,04 M CuSO4 (pH 5.0) and activated at 1100°C for 1 h. The sample of monosaccharides is dissolved in acetone:water (3:1 v/v) The corresponding spots are revealed with naftoresorcin 0,1% in ethanol-H2SO4 at 20% and drying at 800°C for 10 min; and by gas chromatography in the form of aldonitrileperacetates. The aqueous phase (vide supra) is concentrated under reduced pressure until a dry residue is obtained. 1 mL of pyridine and 2 mg of NH2OH.HCl and the mixture is heated up to 900°C for 30 minutes. Subsequently, Ac2O (0,8 mL) is added, and heating continues at 900°C for 1 hour. The solution is concentrated and the aldonitrile-peracetates are obtained and injected into the GC-MS equipment (Hewlett-Packard GCD Plus with capillary columns (HP-5MS) of 30 m length and 0.25 mm of silicone-methylphenyl, with programmed oven temperature of 325°C and initial temperature maintained at 400°C for 4 minutes with a speed of 300°C/minute. There were no fragments with a spectral mass smaller than 39D recorded, after using an electronic impact operation mode at 70 eV using He 99.9% carrier gas, and compared with authentic reference samples (CIIQ-Organic Lab, Cuba). These studies revealed that the monosaccharide chain is composed of D-glucose, D-xylose, D-quinovose, and 3-O-methyl-D-glucose in a ratio of 1:1:1:1. By comparing the specific rotation of the sum of sugars obtained [α] D 20+35,30 (C 0,25 in water) with the calculated rotation for an equimolar mixture of monosaccharides ([α] D 25+390) the conclusion was that the fragments of sugars in compound I possess D configuration [29-31].

It is confirmed that the major triterpenic component of Holothuria floridana inhabiting in the south-western zone of the Cuban archipelago, is an open-chain, holost-Δ 9,11-en-12 α, 17 α, 22 ξ triol tetraoside, belonging to group A of the holothurins, which possesses 3 β-D-glucose, D-xylose, Dquinovose and 3-O-methyl-D-glucose as monosaccharide fragments in its side chain. The compound II, obtained during the acid hydrolysis process of component 1, is a genin of the holostanic series with a heteroannular dienic system Δ 7.9 (11). This compound was reported as an aglycone, isolated from Cuverian tubules of several species of Holothuriidae from Indian Ocean during MS-fragmentation studies.

It is necessary to highlight that there are two previous works that confirm the proposed structures and the similarity of molecular patterns. One of them investigated the composition of triterpenic fractions of Holothurias species collected in the Caribbean Sea considering practically identical molecular fragments [32]. The other work was developed using extracts of Vietnamese Holothurias and corroborated the existence, under natural conditions, of genins similar to compound 2.

The results of preliminary studies of antibacterial and antifungal activity reveal the specific action of these triterpenic glycoside mixtures against pathogenic microorganisms such as Staphyloccocus sp., Candida sp., Escherichia coli and Pseudomonas sp. These results will be published soon in coming contributions.

At present, research is carried out to support and corroborate the existence of heteroannular dienic systems detected after hydrolysis processes and to determine the probable intramolecular cyclization mechanism in acidic conditions.

The authors declare that the research was conducted in the absence of any commercial or financial relationships and do not exits any potential conflict of interest.

All persons contributing as authors (MTCP, JETM) in this manuscript have participated in the planning, design and performance of the research, and in the interpretation of the results. In addition, they have critically reviewed the manuscript, approved the final version and consent to its publication.

Copyright: © 2020 Fors MM, et al. This is an open-access article distributed under the terms of the Creative Commons Attribution License, which permits unrestricted use, distribution, and reproduction in any medium, provided the original author and source are credited.