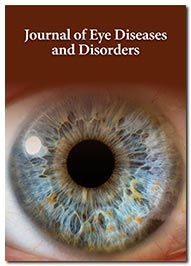 The authors report a case of late-onset Stargardt's disease in a 56-year-old patient diagnosed for the first time at Lubumbashi University Clinics after bilateral, symmetrical decrease in the visual acuity as well as the presence, on fundus, of flavimaculate spots at the posterior pole of both eyes. This observation draws attention to the existence of Stargardt's disease at a late stage.

Stargardt's disease is a bilateral and symmetrical maculopathy that progresses rapidly to macular atrophy and loss of central vision. It is an autosomal recessive disease that was isolated and described perfectly in 1909 by the German physician Karl Stargardt. As a particularity, it is a disease that can be transmitted according to the autosomal dominant mode, we can meet late forms of the fifties, and even forms associating neurological disorders. With the angiography (1970 to 1993), three essential diagnostic signs were identified, namely Bonnin's choroidal silence, the alteration of the pigmentary epitheliuma and the presence of the flavimaculate spots. The frequency of this disease was 1/10000 in 1988 and today it is much more common in the North of France. The disease is diagnosed by a decrease in visual acuity at the beginning of childhood between 7 and 15 years; the late onset of the disease is not exceptional; the adult form (third and fourth decade); the atypical form (fifth and sixth decade) can also be encountered. Visual acuity is the first functional sign; classically, it falls in a few years and stabilizes after 4 or 5 years between 1 and 3/10 allowing reading closely. Visual acuity continues to decline more slowly up to 1/20 in more severe cases after twenty years of evolution. The visual field shows a central scotoma more or less deep of 5 to 10° which can even go up to 15° in the later forms; the peripheral visual field is normal. The vision of colors is often altered early and is paradoxical of red-green axis and blue-yellow axis. If the visual acuity is less than 1/10, the color vision will always be altered.

At ophthalmoscopy, at first, the fundus is normal and disorients the diagnosis; the maculopathy appears quite quickly and the first signs are the reflections in "snail slime" on its surface or a reddish succulent color called "vermilion". At the state stage, the center of the macula is the site of xanthophyll pigmentation. In the late stage, the macula is the site of chorioretinal atrophy and a significant remodelling that can be pigmented. Positive diagnosis is made through ophthalmoscopy and angiography; the possible differential diagnosis are: macular dominant dystrophy, cone dystrophy, autosomal dominant spotted dystrophy simulating the fundus flavimaculatus, mixed dystrophies with altered electroretinogram (Figures 1 and 2) and inverse pigmentary retinopathy. Currently, no treatment is available [1], however palliative measures have been proposed (wearing tinted glasses, magnifying glasses, restriction of vitamin A supplements, psychological support, genetic counselling) [2]. 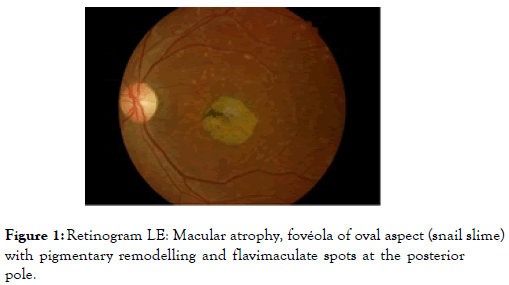 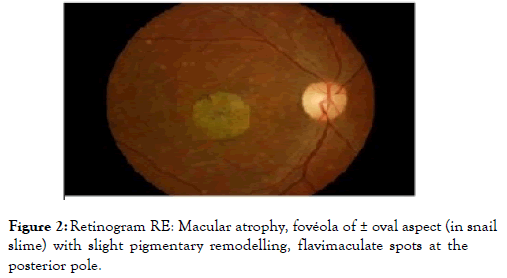 This is a 56-year-old patient who came for consultation for far vision decreased of about 8 months; he is a teacher by profession. No history reported. Visual acuity with correction was 1/10 with fault and read P3 with difficulty. The examination at the slit lamp was normal. The ocular tension taken with the applanation tonometer was 17 mm Hg. The color vision tested with the Ishihara Test showed a red-green axis disorder. Fundus images taken with a retinograph show the appearance of the macula in snail slime with pigmentary remodelling and the presence of flavimaculate spots at the posterior pole of both eyes.

Stargardt's disease is inherited macular dystrophy transmitted by the autosomal recessive mode; the disease is rare in sub-Saharian Africa according to a study conducted by Tunji and al. in Nigeria in 2013 [3]; our case is, probably, the first to be diagnosed in adults in Central Africa. Patients with Stargardt's disease usually have a poor visual prognosis. However, in a study conducted by Nakao and al, Japan in 2012, they observed in some patients despite the dark red foveal pigmentation, good visual acuity corrected despite the presence of the disease at an advanced stage; this is not our case [4]. In a study done in Pakistan in 2008 by Shah and al, it shows that patients with Stargardt's disease respond well to magnification (magnifying glass). Thus, simple bifocal glasses can be used at the first stage of the disease, such is the management that we proposed to our patient [5]. Visual stimulation by video game play can result in improvement in visual acuity, fixation pattern, and retinal sensitivity with improvement in vision-related tasks. It can serve as a simple rehabilitatory technique for patients with central vision loss due to Stargardt disease [6].

In our study, we found that our patient had difficulty to recognize red color as well as green; this is the finding made by Mäntyjärvi et al. where the defect of the red color became stronger at the advanced stage of the disease. Stargardt's disease has always been considered to be transmitted autosomal recessive according to several literatures [7]. In a 1988 study conducted by Weber et al., they present an unusual example of the dominant character of Stargardt's disease from a family tree study of an extended family of ten members [8].

Stargardt's disease is bilateral and symmetrical hereditary maculopathy, which varies in presentation. Stargardt disease with late onset is rare but exists. The management of the condition remains, till now, palliative (wearing tinted glasses, magnifying glasses, restriction of vitamin A supplements, psychological support, and genetic counselling).

A patient’s parent offered a verbal informed consent to this publication and we preserved his anonymity. The Ethics Committee of the University of Lubumbashi endorsed this study.

The authors declare that they have no conflict of interest in relation to this article.

Copyright: © 2019 Bievenu YA, et al. This is an open-access article distributed under the terms of the Creative Commons Attribution License, which permits unrestricted use, distribution, and reproduction in any medium, provided the original author and source are credited.