Journal of Liver received 354 citations as per google scholar report 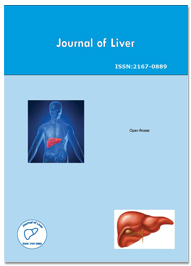 Although spontaneous peritonitis is a common infection in liver cirrhosis patients, little is known about the clinical characteristics and treatments of spontaneous fungal peritonitis (SFP) or fungiascites. Although diagnosis of SFP or fungiascites is made according to the cell counts and culture in ascitic fluid, delayed diagnosis has been associated with poor prognosis of SFP. Risk factors for SFP include severe underlying liver dysfunction, hospitalization and nosocomial infections. SFP mortality rates have been estimated as higher than those of spontaneous bacterial peritonitis. Although early administration of appropriate antifungal agents may be necessary, it remains uncertain whether antifungal therapies would decrease SFP’s mortality rate.

Diagnosis of SFP and fungiascites

Spontaneous peritonitis is a peritoneal cavity infection with no surgically treatable intra-abdominal source of infection or malignancy [13]. Spontaneous peritonitis with culture-positive ascites is defined as culture-positive SBP and bacterascites or SFP and fungiascites. SFP is diagnosed if ≥ 250 polymorphonuclear leukocytes (PMNs)/mm3 are present in the ascitic fluid and the ascites are fungal-culture-positive regardless of bacterial cocolonization [5,10]. Fungiascites are defined as a fungus-positive ascitic culture regardless of bacterial co-colonization and <250 PMNs/mm3 in the ascitic fluid [5,10].

Recent review article supports the usefulness of testing ascitic fluid using methods such as pan-fungal PCR and 1,3-beta-D-glucan assay for early diagnosis of SFP [19]. Therefore, these tests may also be performed at the first paracentesis in cases of suspected spontaneous peritonitis. Biomarkers, such as procalcitonin level and leukocyte esterase reagent strips, can help diagnose SBP [20] but may not distinguish between SFP and SBP.

Fungal infections in patients with LC

A recent multicenter study reported that of 1052 patients with LC and concomitant infections, 134 (12.7%) involved fungal agents [3]. Prophylactic use of antibiotics and nosocomial infection both affect the incidence of fungal infection in LC [3,21]. Zhao et al. [22] reported that, of 232 episodes of bloodstream infections in patients with LC, 12 (5.2%) involved fungal agents (nine were Candida albicans and three were Cryptococcus neoformans).

Spontaneous peritonitis due to fungi

The breakdown of the intestinal mucosa barrier, dysbiosis (changes in the composition of the intestinal bacterial flora), translocation of pathogens, in addition to deficiencies in local host immune defenses may be involved in the onset of ascitic infections that reach the systemic circulation from the gut in patients with LC [23-25]. Fungi in the ascitic fluid in SFP or fungiascites may also be the result of a fundamental pathogenic mechanism of fungal translocation from the gut to systemic circulation [5,19]. Antibiotic treatment of SBP may increase the risk of fungal peritonitis by allowing excessive fungal growth in the intestinal flora [19]. Subsequent translocation of fungi into the peritoneal cavity could induce SFP or fungiascites [19,26], even though their size may make fungal translocation across the gut mucosa more difficult than bacterial translocation [10,14,19]. Fungal translocation may be facilitated by upper gastrointestinal bleeding, which is also common in patients with advanced LC [21]. Direct percutaneous inoculation of fungi has been proposed as a route of fungal infection in patients with refractory ascites and a history of paracentesis [19,21]. Bajaj et al. [3] reported that 6.0% (8/134) of fungal infections in patients with LC involved spontaneous peritonitis.

SFP has mainly been described in patients with end-stage liver disease, such as LC. However, a rare case of SFP due to cardiac origin has been reported [29].

The few available SFP studies have identified high Child–Pugh scores (most patients with LC and SFP were Child–Pugh class C [6,9,10,28]), high model for end-stage liver disease (MELD) scores [10,26,38], invasive procedures [6], length of hospital stay [6,30] and nosocomial infection as risk factors for SFP occurrence [4,10,30]. In previous studies of ascitic culture-positive spontaneous peritonitis diagnosed between 2003 and 2016, nosocomial SFP was confirmed in 7.7% (53/689) of nosocomial spontaneous peritonitis and non-nosocomial SFP was confirmed in 1.7% (17/1018) of nonnosocomial spontaneous peritonitis [30]. However, further studies may be necessary to identify well-defined risk factors for SFP [4] partly because diagnosis of SFP is often delayed.

SFP is usually diagnosed after identifying fungi in cultures of ascitic fluid. The mortality rate is high partly because of delayed diagnosis, lack of clinical signs, lack of suspicion of SFP and delay in treatment with antifungal therapy [9,10,26,30,38]. Fungal resistance to empirical specific antifungal therapy together with delayed diagnosis and treatment is related to poor prognosis of SFP [6].

Although it remains uncertain whether antifungal therapies would decrease the mortality rate associated with spontaneous peritonitis by fungi [14,30,40], early initiation of antifungal therapies is necessary in SFP or suspected SFP cases. However, the questionwhen to start antifungal treatments—remains unanswered partly because of very low-quality of available evidence [4]. Although early differentiation between SFP and SBP may be difficult, clinicians should suspect SFP or SBP due to multidrug resistance bacteria if spontaneous peritonitis has not improved after 48 h of empirical antibiotic treatment [5]. Therefore, additional administration of antifungal agents (and alternation of antibiotics) may be considered for these patients [4,5,8]. Moreover, the recent review article suggests the rapid initiation of antifungal therapy in the presence of septic shock and failure to respond to broad spectrum antibiotic regimen [19]. However, the previous above-mentioned report by Hwang et al. [10] indicated that the condition of some patients with SFP have worsened after initial empirical antibiotic treatment for SBP, and they have died during the early stage of peritonitis despite undergoing antifungal treatment. Therefore, combination therapies of antibiotics and antifungal agents may be considered for patients with severe LC and nosocomial spontaneous peritonitis, although accumulations of further studies are necessary to justify this.

There was no funding support and there is no conflict of interests to declare.

I have no relevant financial or nonfinancial relationships to disclose.

Copyright: Â© 2019 Shizuma T. This is an open-access article distributed under the terms of the Creative Commons Attribution License, which permits unrestricted use, distribution, and reproduction in any medium, provided the original author and source are credited.