Frontiers in Advanced Materials and Nanotechnology

Frontiers in Nanotechnology and Nanomaterials

Dye-sensitized solar cells (DSSCs) have attracted enormous attention in the last couple of decades due to their relatively small size, low cost and minimal environmental impact. DSSCs convert solar energy to electrical energy with the aid of a sensitizing dye. In this work, two ruthenium-based dyes, tris(bipyridine)ruthenium(II) chloride (Rubpy) and ruthenium(II)2,2’-bis(benzimidazol-2-yl)-4,4’-bipyridine (RubbbpyH2), were synthesized, characterized, and investigated for use as dye sensitizers in the fabrication of DSSCs. The photovoltaic performance of the ruthenium-based DSSCs was assessed. The solar-to-electric power efficiency of the RubbbpyH2 DSSC was 0.2% and that of the Rubpy was 0.03%. The RubbbpyH2 was also deprotonated and analyzed to study the effect of deprotonation on the efficiency of the solar cell. The deprotonated species, Rubbbpy, recorded an average efficiency of 0.12%. Thus, a change in pH did not enhance the efficiency of the solar cell. The cells were further characterized by impedance measurements. The photocurrent-photovoltage results were not consistent with the absorption spectra since Rubbbpy showed a more prominent band than RubbbpyH2 but had a lower efficiency.

Among the different types of renewable energy that have been investigated recently, solar power is one of the most efficient and inexhaustible sources available [1]. Although solar panels have grown in use, concerns have also grown regarding the various risks and disadvantages associated with traditional silicon-based solar panels, such as cost and the presence of toxic materials such as hexafluoroethane, lead, and polyvinyl fluoride. Dye-sensitized solar cells (DSSCs) have become attractive alternatives or complementary forms of solar cells owing to the fact that they are easily created, economical and fabricated with materials that are plentiful [2-4]. Work on DSSCs was first reported by O’Regan and Grätzel in 1991 [5]. Since then, there have been a plethora of publications dealing with the optimization of the various components of DSSCs with the goal of enhancing power conversion efficiency of the cells [6-12]. The DSSC is made up of three main parts: 1) a photoanode consisting of a sensitizing dye adsorbed on a semiconductor-coated fluorine doped tin oxide (FTO) glass; 2) an electrolyte made up of redox mediator; and 3) a counter electrode that facilitates redox reduction in the electrolyte.

In the presence of sunlight, the dye sensitizer absorbs photons leading to the ejection of an energized electron into the conduction band of the semiconductor. The injected electron is transported through the semiconductor to the conductive side of the FTO glass and subsequently through an external circuit to the counter electrode. At the counter electrode, the electron catalyzes the redox reaction in the electrolyte which in turn regenerates the oxidized dye. Thus, in DSSCs, charge separation occurs at the semiconductordye interfaces while the transport of charge is performed by the semiconductor and the electrolyte. This arrangement allows for optimization of the spectral properties to be carried out by modification of the dye alone. Similarly, the charge transport properties of the device could be enhanced by the optimization of the semiconductor and the electrolyte composition [13-15]. The many channels through which DSSCs can be optimized has given rise to a large number of papers reporting on studies carried out to improve the efficiency of the DSSC.

One particular area that has occupied the interest of most researchers is the dye sensitizers used in the solar cell. Both synthetic and natural dyes have been used with notable success. Natural dyes obtained from different parts of plants have been used in the fabrication of solar cells [16-21]. Although natural dyes are more environmentally friendly, low cost, and abundant in supply, their efficiencies are not as high as that of most synthetic dyes. Dyes that have been synthesized and applied in DSSCs include ruthenium complexes, [22,23] Porphyrin dyes, [24] and Cyanine dyes [25]. Among these groups, DSSCs using ruthenium complex dyes have consistently produced the best results due to their relatively long life in metal-to-ligand charge transfer (MLCT) properties. Most studies have reported using ruthenium trisbipyridin complexes as molecular devices for energy conversion. The modification or tuning of redox and photochemical properties have been reported by replacing bipyridin ligand with other nitrogencontaining heterocycles [26]. In addition, pH-dependent redox and photochemical properties have been reported in a ruthenium benzimidazole-based complex where imidazole moiety functions as a pH sensor [26]. In the present study, several ruthenium complexes containing bridging ligand 2,2′-bis(benzimidazol-2-yl)- 4,4′-bipyridine (bbbpyH2) and 2,2’-bipyridine (Scheme 1) have been used as sensitizers for the fabrication of DSSCs. 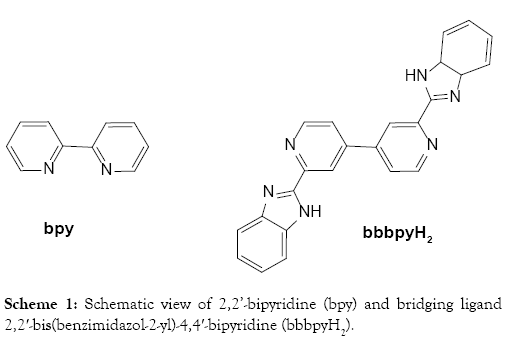 The electrodes were prepared according to a previously published procedure with some modifications [27-30]. The working electrode was prepared by depositing a thin film of TiO2 on the conductive side of a fluorine doped tin oxide (FTO) glass slide using a spin coater and the film annealed at 380 °C for 2 hours. The substrate was then immersed in dye for sensitization. The counter electrode (cathode) was prepared by printing colloidal graphite on FTO coated glass slide. The dye-sensitized slide and the carbon electrodes were assembled to form a solar cell by sandwiching a redox (I−/I3−) electrolyte solution.

The synthesis of bridging ligand 2,2′-bis(benzimidazol-2-yl)-4,4′- bipyridine (bbbpyH2) and its ruthenium complex was reported in details by Haga et al. [26]. 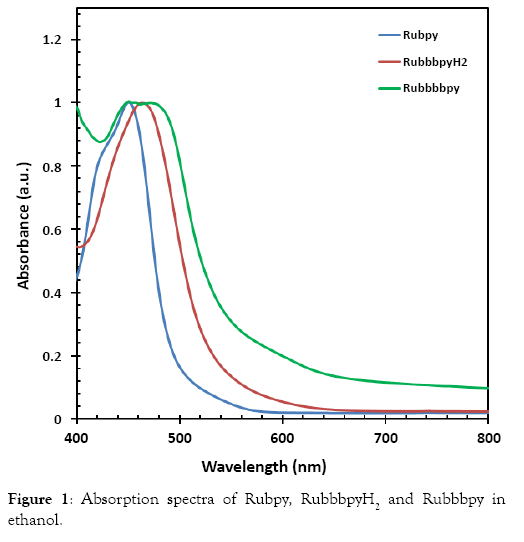 The steady state fluorescence spectra of the three dyes were taken as part of the photophysical studies on the dyes and are displayed in Figure 2. The measurements were carried out in ethanol with an exciting light of 600 nm. The emission maximum of Rubpy at 594 nm and that of the Rubbbpy is 641 nm but is red-shifted and broadened in the case of the deprotonated species. 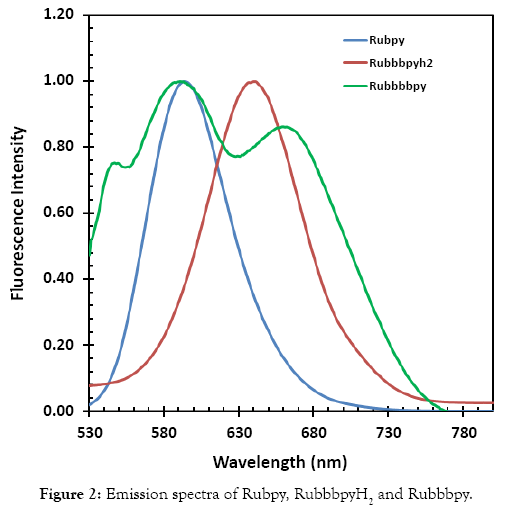 Fluorescence emission decay curves of the Rubpy, RubbbpyH2 and Rubbbpy were measured and the results are displayed in Figure 3 and Table 1. The measurements were conducted in ethanol. The results were fitted to the second exponential decay with a faster component of 22 ps, 13.4 ps, and 7.7 ps and a slower component of 347 ns, 332 ns, and 352 ns for the Rubpy, RubbbpyH2 and Rubbbpy, respectively. The values obtained are well within the lifetime values of 200-800 ns reported by Haga et al. [26] for mono- and dinuclear Ru complexes at room temperature. Dinuclear Ru complexes were specifically found to have a higher lifetime, however, water decreased the lifetime drastically. This decrease is attributed to the hydrogen-bonding interaction of the imino NH moiety of bbbpyH2 which acts as H+ donor and the water as H+ acceptor. Thus using ethanol as the solvent likely resulted in the lower lifetime due to the change in the excited-state properties. 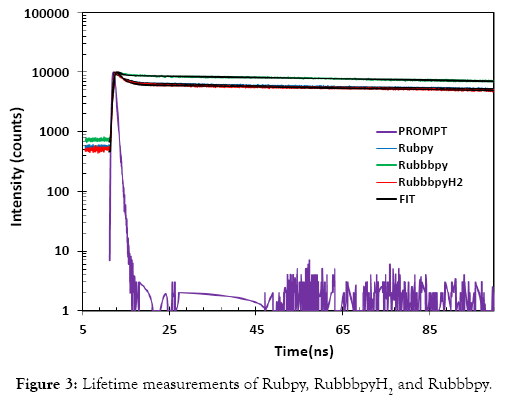 Fourier-transform infrared spectroscopy (FTIR) studies were carried out to investigate the interaction of the TiO2 with different dyes that were utilized. The dyes usually need specific functional groups to effectively adsorb on the TiO2 film. In the presence of such functional groups, the dye adsorbs firmly to the titanium dioxide which results in the easy transport of charge and consequently a higher efficiency of the solar cell. The FTIR spectra of blank TiO2, Rubpy, RubbbpyH2 and Rubbbpy dye-sensitized titanium dioxide film are displayed in Figure 4. The peak at 3440 cm−1 is due to the presence of the hydroxyl group in the Rubbbpy. 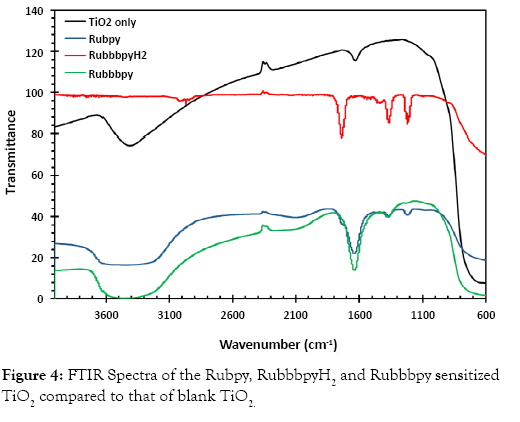 Figure 4: FTIR Spectra of the Rubpy, RuemissionpyH2 and Ruemissionpy sensitized TiO2 compared to that of blank TiO2. 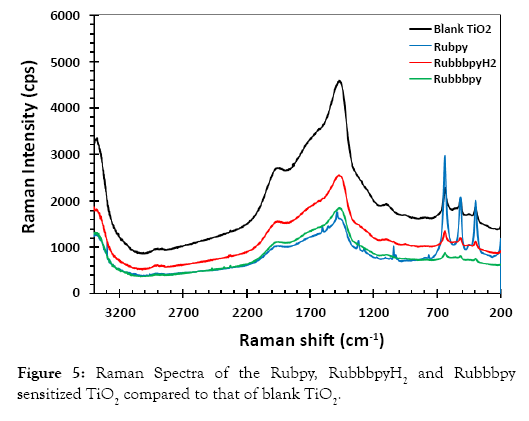 Figure 5: Raman Spectra of the Rubpy, RuemissionpyH2 and Ruemissionpy sensitized TiO2 compared to that of blank TiO2.

The current-voltage characteristics of the samples under simulated solar irradiation of AM 1.5 G were carried out to study the differences in the efficiency of solar cells. The results of the photocurrent-voltage measurements are displayed in Figure 6 and Table 2. The solar-to-electric power efficiency of the Rubpy DSSC was 0.029% whereas that of Rubbbpy, and RubbbpyH2 DSSCs was 0.118% and 0.201%, respectively. With deprotonation using sodium methoxide, the expectation was an improved interaction of the dye with titanium dioxide resulting in a higher efficiency. However, the efficiency of the RubbbpyH2 was found to be higher than that of the DSSCs of the deprotonated species. Thus, whereas the binding might have improved, it did not translate into a higher yield of the electric power.

Electrical impedance spectroscopy (EIS) is an important electrochemical technique normally used for investigation of charge carrier dynamics in DSSCs. EIS was employed in this work to characterize the three different DSSC samples. The results of the EIS measurement are presented in a Nyquist plot in Figure 7 and in a Bode plot in Figure 8. The measurements were undertaken in the frequency range of 0.01 Hz to 100 KHz. The two semicircles displayed in the Nyquist plot indicate the electron transfer processes between the dye-sensitized photoanode and the electrolyte interface. 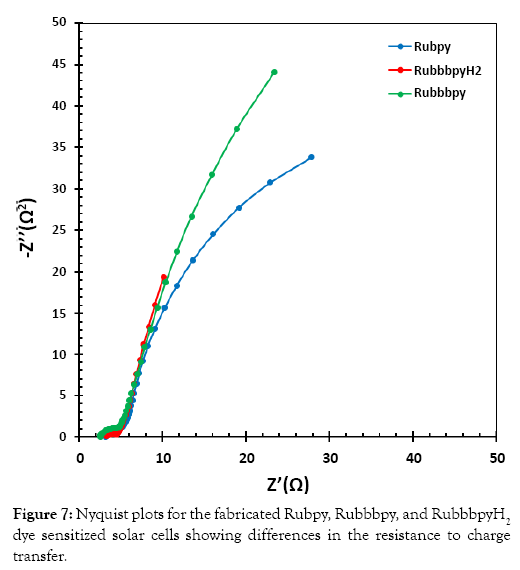 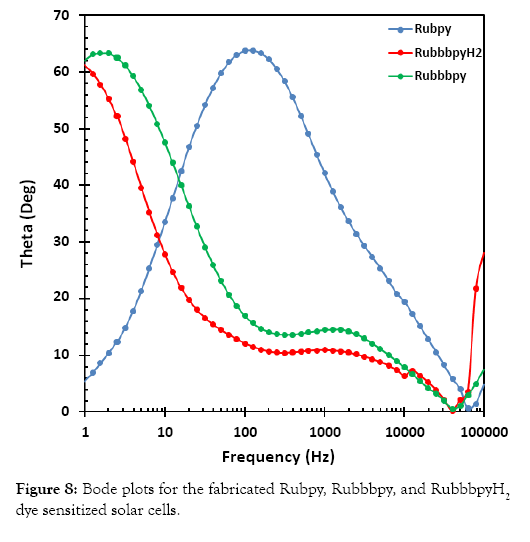 The photovoltaic performance of the RubpyCl2 DSSC was compared to that of RubbbpyH2 and its deprotonated form to study the effect of the imidazole group and pH on the efficiency of solar cells. The dyes were first characterized with UV-Vis, Emission Spectroscopy and Lifetime measurements. The solar cell efficiency of the Rubpy was 0.029% and that of the RubbbpyH2 was 0.20%. The efficiency of the Rubbbpy was 0.118%. Although the effect of the pH was evident in the photophysical studies, there was no significant change in the photovoltaic properties of the resulting DSSCs.

This study was funded by the University of Maryland System (Wilson E. Elkins Professorship), Constellation, an Exelon Company (E2-Energy to Educate grant program) and the United States Department of Education (USDE-SAFRA Title III Grant). The authors extend special thanks to the office of Institutional Advancement, Coppin State University, for administrative support. The content is exclusively the responsibility of the authors and does not necessarily represent the official views of the funding agencies. The authors also acknowledge research support from the National Institutes of Health (NIH) grant RO1CA206190 to MMA.

Copyright: © 2019 Ali MM, et al. This is an open-access article distributed under the terms of the Creative Commons Attribution License, which permits unrestricted use, distribution, and reproduction in any medium, provided the original author and source are credited.