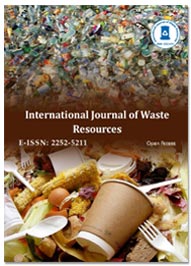 The present study is considering the drainage coming into the rivers and affecting people’s lives in Theni district, India. The Varaha (Varahanadhi) is a small river that flows through the town of Periyakulam in Theni district of the state of Tamil Nadu in India. It joins the Vaigai River near Marugalpatti. In today’s time the the Varaha river, once considered sacred, is fast becoming an open drain since the drainage water had been diverted to it. The Panchayat Union waste and Municipality waste has been directed to the river. People living along the banks complain of mosquitoes and presenting with sicknesses. They require closed drainages to prevent getting sick. Indian officials have said that to consider with an alternate drainage system to be created at the cost of about Rupees twenty-six crores. Survey and questions to the people living near this open drainage complained that the Indian officials had taken surveys, and nothing has been done so far, considering the money has been paid.

Theni District is a district of Tamil Nadu state in India. Theni district is bounded by Dindigul District to the north, Madurai district to the east, Virudhunagar District to the southwest, and Idukki district of the Kerala state to the west. The district is also divided into two natural divisions: The hilly areas are constituted by parts of the Five taluk's Theni, Bodinayakanur, Periyakulam, Uthamapalayam, Usilampatti and Andipatti with thick vegetation and perennial streams from the hills on the western side and Cumbum valley which lies in Uthamapalayam taluk (Figure 1). 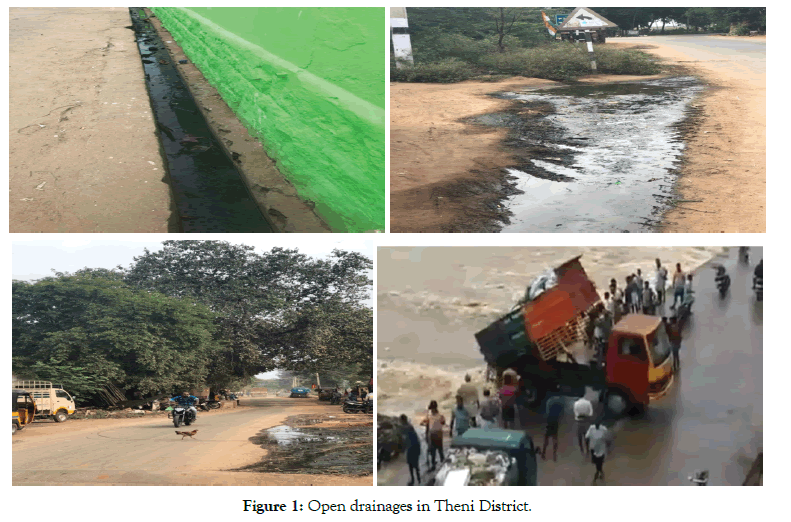 The Rivers Being Polluted

The problem is that the official workers, town workers, and garage trucks dumps tons of waste into the river and these rivers flow through the town of Theni district (as noticed in the abstract pictures). The residents of Theni distract, who benefitted from the rains for the past two years, were rejoicing the season. Then there was overwhelming rainfall, the water tank in the district reached its full capacity and eventually excessive water from the tank was released into the Ponnaiyar river, Manimutharu river, Gadilam and Vellar River that run through all over Theni districts. The farmers, the public and other water dependent sectors were planning to use the rainwater effectively the village council administration planned other ideas, they had taken the situation for their advantage which they had decided to dump the degradable, non-biodegradable and pharma waste into the river. The district collector inspected the spot and conducted an inquiry into the conduct of town village council officials. The collector then ordered for the suspension of executive secretary and a sanitation supervisor. Apart from this, two other non-contractual laborers were also suspended. The problem is this continues not to be a permeant solution once the stay order is done these administrations continue to pollute the nearby rivers over and over again. The ones who is getting affected is the people living along the banks, they complain of mosquitoes, and they present with sicknesses. The only solution for this situation is to have closed drainages.

The Problem and the Effective Solutions for Open Drainages

People living along the banks complain of mosquitoes and always presenting with sicknesses. They are requiring closed drainages to prevent getting sick. If these open drains are not checked on a regular basis, they become a health hazard to the population. Along the banks this is becoming a breeding center for the mosquitoes, disease-causing parasites and other microorganisms. The other problem is when the rain begins, these open drains can quickly spread water-borne diseases and infections.

The effective solutions to open drains are combined sewers and combined drains meaning covering the sewage system which will prevent the sewage water to enter or overflow into the roads causing floods and agricultural plants. Constructing water drains in farms, community education and participation, urban drainage planning and review drainage designs, urban housing and planning legislation and maintenance of these closed drains [1].

These are some of effective solutions that the people of Theni district are looking for their government service officers to consider and accomplish.

The people of Theni district are requiring closed drainages. Indian officials of the Municipality officers have said that to consider with an alternate drainage system to be created at the cost of about Rupees twenty-six crores. The people living near this open drainage complained that the Indian officials had taken surveys, and nothing has been done so far, considering the money has been paid.

I had contacted the health department of the Office of Joint Director of Health Services in Theni [2]. They required me to contact the Municipality office [3] again, the municipality office requested me to send them a notarized professional letter mentioning the situation. Which currently was a bad drainage system situation locally. Due to the situation there was drain water overflowing from the gutters. As you can see from the above pictures in my abstract, the water turned into big pounds. It was not just affecting the condition of the roads but also creating problems for the pedestrians because they were not able to cross the road and faced lots of troubles while crossing the roads. This bad system was generating many fatal diseases. There were flies that were found immensely and it was helping the growth of mosquitoes. Malaria was broken out and many people had become victims of the malaria fever. This worse atmosphere gave birth to many dangerous diseases like dengue, cholera and now the Covid 19. I had to constantly send messages and kept calling them. Also, I sent many reminder letters. The problem was cause of carelessness of the authorities there were many life’s that was lost due to these conditions. One of the things I kept requesting that this matter should be taken in hand seriously by relevant municipal authority. Some immediate steps must be taken to stop this grim issue so that people can live comfortably.

Finally, the message was heard. Once they had took action, they told me to contact the Health Services because they needed evidence. The health department sent the Epidemic Intelligence Services (EIS) officers they came to investigate the environmental situation, they had identified the cause and they had ideas to control the situation, and they collected the evidence so the diseases that are occurring can be prevented. One of the diseases that they were worried about along with the other diseases was the pandemic outbreak of Covid 19 since there is no treatment. They had mentioned to the Municipal authorities they need to consider the alternate drainage as soon as possible. If not, this pandemic disease could get out of control even with the proper medical system. The Health officers want to prevent the disease with the guidance of Center of the disease control (CDC) and with the alternative drainage.

Copyright: Ă?Â©2020 Ondiveerappan A. This is an open access article distributed under the terms of the Creative Commons Attribution License, which permits unrestricted use, distribution, and reproduction in any medium, provided the original work is properly cited.