Lung Mass as a Presenting Sign of Disseminated Cryptococcus Lung Mass as a Presenting Sign of Disseminated Cryptococcus

Cryptococcosis is an invasive fungal disease that most commonly affects immunocompromised individuals, typically causing pulmonary and Central Nervous System (CNS) symptoms. The fungus that causes cryptococcosis, Cryptococcus, is globally disseminated and often transmitted through bird droppings. The two most frequent and pertinent species responsible for clinical infections in humans include Cryptococcus neoformans, which has been known to cause the majority of cryptococcosis globally until recently, during which Cryptococcus gattii has been identified and reported more frequently. A 54-year-old male with a history of renal transplant on chronic immunosuppressants and type 2 diabetes mellitus was found to have multiple lung masses within the right upper and right lower lobes. He had also been experiencing syncope and multiple falls with worsening headache, tinnitus, diplopia, and ongoing weight loss. The patient underwent a percutaneous biopsy of the lung mass in addition to a Lumbar Puncture (LP), which revealed a positive cryptococcus antigen confirmed to be C. gattii. The patient was started on amphotericin B and flucytosine to treat cryptococcal meningitis. Despite treatment, his condition continued to worsen, necessitating daily therapeutic LP and temporary placement of a lumbar drain. Once his symptoms were better managed, he was discharged from the hospital but has continued to have serial LPs outpatient while concurrently taking fluconazole to prevent reaccumulation of CSF and recurrence of symptoms. The purpose of this report is to describe the unique presentation of disseminated Cryptococcus gattii infection identified as a lung mass and subsequent management of cryptococcosis.

Cryptococcus is a type of invasive fungus found in the soil worldwide and is often transmitted through bird droppings. While healthy individuals rarely contract Cryptococcus infection, those who are immunocompromised are highly susceptible to cryptococcosis, which manifests as pulmonary and neurologic symptoms. Approximately 1 million cases of cryptococcosis occur throughout the world annually, with an estimated 650,000 associated deaths [1]. Specifically, Cryptococcus neoformans and Cryptococcus gattii are two of the most common species of the genus that cause disease in immunosuppressed individuals. However, there has been evidence to suggest that while C. neoformans is known to cause death by dissemination through the CNS, C. gattii primarily causes severe pulmonary symptoms and death without dissemination [2]. Unlike the worldwide distribution of Cryptococcus neoformans, the distribution of Cryptococcus gattii was found to be restricted to tropical and subtropical regions, where the lowest temperatures reached in the winter still remained above freezing, with an unusually high prevalence in southern California [3]. Here we describe a unique case of a 54 year old male with disseminated Cryptococcus gattii infection that presented as a lung mass [4].

A 54-year-old male with a history of renal transplant, performed a year prior to presentation, for ESRD secondary to chronic hypertension and recurrent pyelonephritis, on chronic immunosuppressants and type 2 diabetes mellitus was admitted for multiple lung masses found on chest CT (Figures 1A and 1B). The patient was found to have pulmonary masses within the right upper and right lower lobes, the largest being 6.5 cm in the right upper lobe, concerning for post-transplant malignancy such as primary bronchogenic carcinoma (Figure 1B). He had also been experiencing multiple syncopal episodes and falls with worsening headache, tinnitus, diplopia, and ongoing weight loss. The patient underwent a percutaneous biopsy of the lung mass. Given his neurological symptoms, a lumbar puncture was also performed, which showed an opening pressure greater than 50 cm H2O, lymphocytic pleocytosis, and a positive cryptococcus antigen. The results of the percutaneous lung biopsy revealed C. gattii. The patient was started on amphotericin B and flucytosine to treat cryptococcal meningitis. Despite treatment, he continued to have worsening headaches, tinnitus, and diplopia. Daily therapeutic LPs were performed to treat his ongoing symptoms but the opening pressure failed to decrease during subsequent LPs. A lumbar drain was subsequently placed for continuous CSF removal. He continued to receive induction therapy with amphotericin B and flucytosine for disseminated C. gattii infection until resolution of infection, confirmed with negative CSF cultures, after which he was transitioned to oral fluconazole and the lumbar drain was removed following lower drainage rates. Since then, he has been managed with oral fluconazole and a total of 33 serial outpatient LPs to monitor opening pressure and CSF fungal cultures, and to therapeutically treat patient’s neurologic symptoms. His most recent chest CT in February showed continued consolidative opacities in the peripheral right lung consistent with cryptococcal infection, without significant change. If he continues to experience persistent symptoms, neurosurgery will discuss the possibility of further intervention. 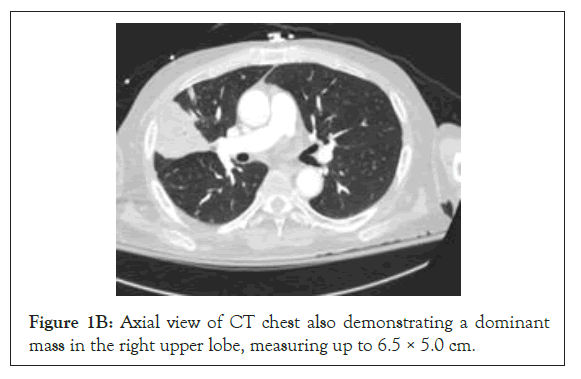 Figure 1B: Axial view of CT chest also demonstrating a dominant mass in the right upper lobe, measuring up to 6.5 × 5.0 cm.

Cryptococcus is dispersed throughout the environment, is often associated with bird droppings or soil, enters the human body by inhalation, and in most cases is eliminated by the host’s defense mechanisms. However, under certain circumstances, such as in hosts with HIV/AIDS, patients taking immunosuppressive medications, or those who have undergone solid organ transplant, the infection instead progresses to pneumonia and subsequently disseminates throughout the host body and CNS, causing meningitis or meningoencephalitis and death [5]. Numerous studies have shown that C. neoformans grows quickly in the brain and more commonly manifests with meningitis or meningoencephalitis while C. gattii infection customarily presents as pulmonary disease because of its ability to grow faster in the lungs [6]. The presentation of this patient follows the same trend, as he presented first for and workup was initiated to evaluate multiple lung masses found on CT, but was later also found to have meningitis. This patient also possesses risk factors that made him more susceptible to infection by Cryptococcus, including history of a solid organ transplant and immunosuppression. Cryptococcosis is usually seen in a transplant recipient at least 6 months after transplantation, with an asymptomatic pulmonary nodule containing the organism being the most common presentation of infection [7]. Infection by C. neoformans or C. gattii should be suspected in transplant patients who present more than six months after transplantation with a pulmonary nodule, unexplained headaches, decreased levels of consciousness, failure to thrive, or unexplained focal dermatologic disease. Elevated titers of cryptococcal antigen in the CSF, positive CSF culture, and high CSF pleocytosis are markers of high fungal burden and severe inflammation in cryptococcosis [5]. The etiology of elevated intracranial pressure has been theorized to be due to parenchymal inflammation, interstitial edema, and decreased outflow of CSF due to the presence of Cryptococcus and its capsular polysaccharide at the arachnoid granulations [8].

Culture (e.g. blood, CSF) is the gold standard for diagnosing cryptococcal infections. C. gattii is generally the more aggressive cryptococcal species with a mortality rate in transplant patients of up to 20%-42% [9]. In regards to management, efforts should focus on therapeutic procedures to decrease intracranial hypertension in addition to antifungal therapy with amphotericin B and flucytosine. Because intracranial hypertension correlates with poor clinical outcomes, aggressive management with serial lumbar punctures is necessary until pressures are less than 25 cm of water, with progression to lumbar drains, VP shunts, or ventriculostomy if pressures remain elevated [5]. Once the induction phase of approximately six to eight weeks of treatment with amphotericin B and flucytosine has lapsed, patients should be transitioned to oral fluconazole therapy for an average of six months or more. Antifungals alone are not sufficient to treat C. gattii infections, and source control (i.e. lobectomy for lung infections or VP shunt for CNS involvement) is often required for complete resolution.

In conclusion the disseminated Cryptococcus should be suspected in patients who are immunocompromised and present with pulmonary and/or neurological manifestations. The presentation of this patient follows the same trend.

Copyright: © 2021 Tan S, et al. This is an open-access article distributed under the terms of the Creative Commons Attribution License, which permits unrestricted use, distribution, and reproduction in any medium, provided the original author and source are credited.