Background and objective: Inflammation has been studied for thousands of years in an effort to mitigate its negative effects on the body. Analgesic and anti-inflammatory drugs were the primary concern in monoterpenes. Monoterpenes have been recognized for their ability to suppress inflammatory process and modulate the vital chemical mediators of inflammation, such as pro-inflammatory and anti-inflammatory cytokines. This study aimed to isolate the secondary metabolites of Lantana montevidensis (Verbenaceae) flowers and evaluate their in vitro antiinflammatory activity.

Results and discussion: As a result, seven compounds were isolated and identified, in which three of them were reported for the first time from genus Lantana. For the TNF-α ELISA assay, compound 1 significantly reduced the level of TNF-α (83.5 pg/mL), while compounds 2 and 3 showed moderate inhibition to TNF-α level (144.7 ± 7.43 and146.2 ± 5.27 pg/mL respectively). In addition, the NF-κB reporter gene assay revealed that the tested compounds (1-2) inhibited the relative NF-κB activity which was induced by TNF-α (0.41 ± 0.01 and 0.47 ± 0.01, respectively). Staursporine was used as a positive control in both assays.

Inflammation is a defensive mechanism that has been developed in higher organisms to respond to harmful threats such as microbial invasion, tissue damage, and other harmful conditions [1]. The molecular mechanism of inflammation is a rather complicated process, starting with the identification of specific molecular patterns associated with either disease or tissue injury.

The transcription factor, nuclear factor-κB (NF-κB), is a dominant regulator of the expression of hundreds of genes that play a major role in the regulation of inflammation and apoptosis [2]. Several stimuli are known to activate the NF-κB pathway, including pro-inflammatory cytokines involved in inflammation process, such as interleukin-1β and tumor necrosis factor-α (TNF-α), pathogenic bacteria and viruses, bacterial lipopolysaccharides and peptidoglycans, and oxidative stress. NF-κB targets the expression of genes such as INOS and ICAM-1, which play important roles in the inflammatory response [3]. As a result, the NF-κB signaling pathway was a target for pharmacological intervention, particularly in inflammation or cancer models, where the pathway is often active.

Monoterpenes are examples of bioactive secondary metabolites which are composed of two isoprene units (C5H8). They have shown promising profile as agents that reduce the inflammatory process, modulate main inflammatory cascade chemical mediators and stimulate an increase in anti-inflammatory cytokines, such as IL-10. In fact, monoterpenes have become of great interest in relation to the development of analgesic and anti-inflammatory drugs [4]. Linalool is an example of monoterpene alcohols which is the major component of many aromatic plants volatile oils. Many scientists have shed the light on linalool as anti-inflammatory agent, as they showed by evidence that linalool works by modulating important pathways that control the release of anti-inflammatory and proinflammatory cytokines in dose dependent manners and regulate NF-κB activation and its translocation into the nucleus [4,5].

Our plant of concern is Lantana montevidensis (Spreng.) Briq. (Verbenaceae).It is one of the Lantana species that is originated from South America and has naturalized in numerous parts of the world including Australia, New Zealand, Africa, parts of India and North America [6]. In folk medicine, it is used as carminative, antispasmodic, antiemetic, and to treat respiratory disorders as cough, cold, asthma, and bronchitis [7]. During our research course on the bioactive components from different organs of L. montevidensis, we reported the analysis of the volatile oils of the leaves and flowers, and isolation of pentacyclictriterpenoids, flavonoids, iridoids and phenylpropanoids from the methanolic extracts of both leaves and roots, as well as biological evaluation of various extracts and isolated compounds for certain activities such as free radical scavenging, antimicrobial, anti-inflammatory and antilesihmanial activities [8-11]. In continuation of our studies, we examined the total methanolic extract of the flowers of L. montevidensis and we report herein the isolation and structural elucidation of its bioactive compounds which include three linalool glycosides: (3Z,7S)-7-hydroxy-3,7-dimethyl-3,8-octadienyl- β-D-glucopyranoside(1), (3S,6R)-trans-linalool-3,7-oxide glucoside (2), (3S,6R)-cis-linalool-3,6-oxide glucosideverbascoside (3), an iridoid glycoside namelyshanzhiside methyl ester (4), benzyl-β-D-glucopyranoside(5) andtwo phenyl propanoids:verbascoside (6) and forsythoside B (7).Additionally,the isolated monoterpene glycosides were assessed for their anti-inflammatory activity through the monitoring of the TNF-α induced NF-κB transcription using NF-Κb/Jurkat/GFP reporter cell line and the quantitative measurement of rat TNF-α in cell culture supernatants.

Standard ELISA assay was used to determine the levels of cytokine TNF-α in the cells supernatants. Abcam’sTNF-α rat in vitro ELISA kit was used, as it designed for the quantitative measurement of Rat TNF-α in cell culture supernatants, serum and plasma samples. All the material was supplied by Abcam, Cambridge, MA, USA and the kit was used according to the manufacturer ’ s instructions and the previously published procedures [12].

Briefly, the collected supernatant was diluted and coated onto plates in a 96-well format. Each of standard and sample, including blank controls (100 μL) was added in appropriate wells, followed by addition of Biotinylated anti-TNF-α (50 μL) to all wells. Plate was covered and incubated for 3 hours at room temperature (18-25°C), then washed and covered. Streptavidin- HRP solution (100 μL) was added into all wells, including the blank wells, then plate was recovered and incubated for 30 min. Chromogen TMB (Tetramethylbenzidine) substrate solution (100 μL) was added into each well and plate was incubated in the dark for 10-20 minutes at room temperature with avoidance of direct exposure to light. Stop Reagent (100 μL) was added into each well. Results were taken immediately after the addition of Stop reagent. Absorbance of each well was read at 450 nm in ELISA reader (Bioline Technologies, Maharashtra, India). Staurosporine (Merck, Darmstadt, Germany) was used as a positive control.

The mean absorbance for each set of triplicate standards, controls and samples, was calculated and subtracted the average zero standard optical density. A standard curve with standard concentration on the x-axis and absorbance on the y-axis was plotted, and used for determination of the concentration of TNF-α in samples.

The NF-κB/Jurkat/GFP™ cell line (System Biosciences, CA, USA) was specifically designed for monitoring the NF-κB signal transduction pathway in vitro in a physiologically relevant cell line. The assay was done according to the previously published procedures [13].

NF-κB/Jurkat/GFP™ cells were obtained from the human T lymphocyte-based Jurkat cell line. Jurkat cells were transduced with HIV-based pseudoviral particles packaged with an expression vector encoding the GFP reporter gene driven by the minimal cytomegalovirus (mCMV) promoter in conjunction with four copies of the NF-κB consensus transcriptional response element upstream of mCMV. The obtained cells can be further cultured in the aforementioned culture medium.

The obtained cells were divided into six groups (I-VI). Groups (IIV) were treated for 30 min. with the test compounds (1-3) and the positive control staurosporine at concentration 5 μg/mL, respectively. This is followed by placement of reporter cells (5 × 105 cells) of groups (I-V) in a 24-well plate, in which the concentration in each well is 1 million cells/mL. TNF-α (10 ng/mL) (RandD Systems, Minneapolis, MN, USA)was added to groups I-V. Group V represented the cells stimulated with TNF- α and untreated with any of the tested compounds, while group IV represented the unstimulated and untreated cells group. After 24 hours 100 μL of the cells were transferred to a well of a Costar ® UV plate (96 well, No lid, w/UV Transparent Flat Bottom, Corning, NY, USA) and the intensity of GFP fluorescence was measured (Excitation 485 ± 20, Emission 528 ± 20) in a SynergyTM HT Multi-Detection Micro-plate Reader (BioTech, Winooski, Vermont). The GFP fluorescence were measured and expressed as fold-increase relative to the unstimulated and untreated cells.

Results are expressed as mean ± standard error of mean (S.E.M.). The statistical analyses were performed by one-way ANOVA followed by Dunnett’s multiple comparison test. A pvalue <0.05 was considered statistically significant.

The structural elucidation of the isolated compounds was based on spectroscopic analyses (MS, 1D and 2D NMR) compared with the data published in the literatures. Compound 1a and 1b was identified as (3Z,7S)-7-hydroxy-3,7-dimethyl-3,8-octadienyl- β-D-glucopyranoside [14]. It was firstly reported from EtOH extract of Pharbitis nil seeds (Convolvulaceae). In this study, the author determined the unique geometric conformation of compound (1a and 1b) to be (3Z, 7S) and shed the light on the first reported compound with 3Z, 7S-form in nature. Compound (2a and 2b) was isolated for the first time from young leaves of Japanese pepper (Xanthoxylumpiperitum DC.) and it was determined as (3S,6S)-cis-linalool-3,7-oxide-β-Dglucopyranoside [15]. Additionally, the same study determined the absolute configuration of compound (3a and 3b) for the first time and identified it as (3S,6R)-cis-linalool-3,6-oxide-β-Dglucopyranoside (3) [15]. To the best of our knowledge, this is the first report for the isolation of monoterpenoidal linalool glycosides from genus Lantana. Compounds (4a-7b) were identified asshanzhiside methyl ester [16], benzyl-β-Dglucopyranoside [17], verbascoside [18] and forsythoside B [19], respectively. All the structures of the isolated compounds are shown in Figure 1. 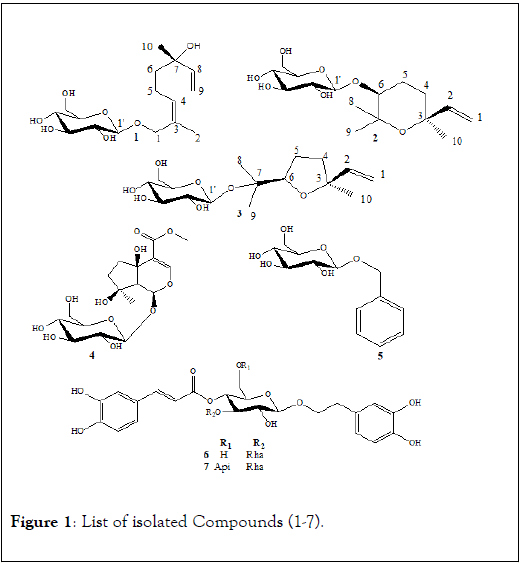 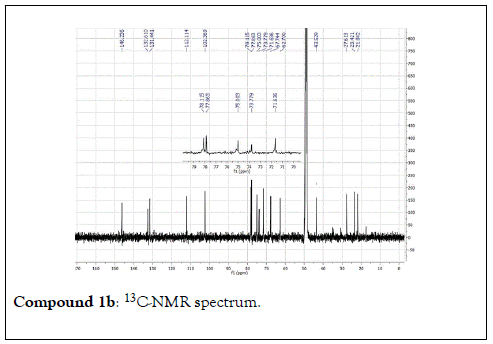 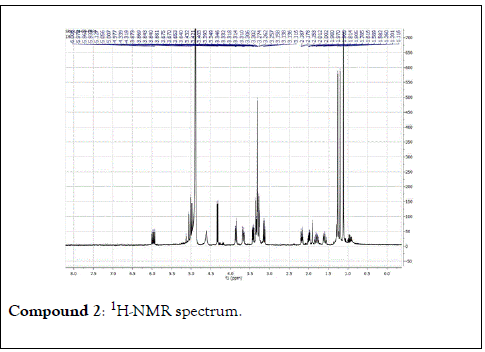 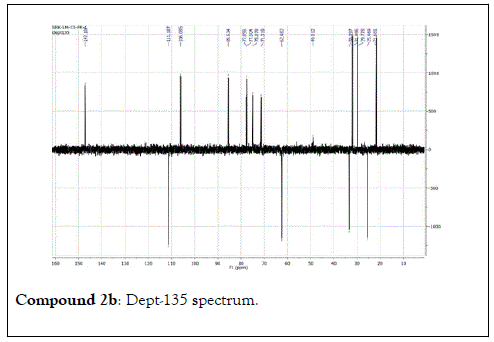 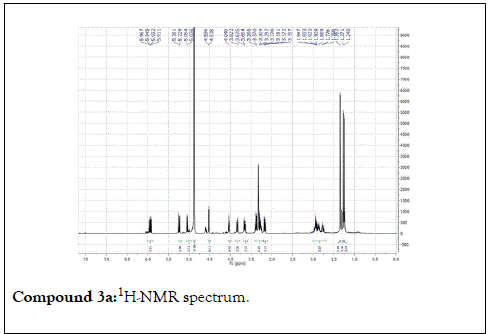 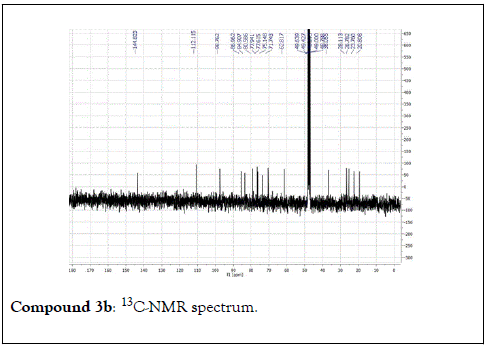 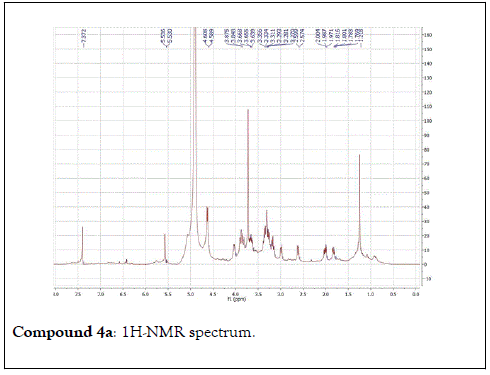 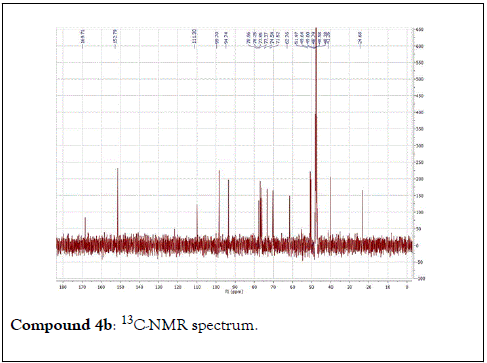 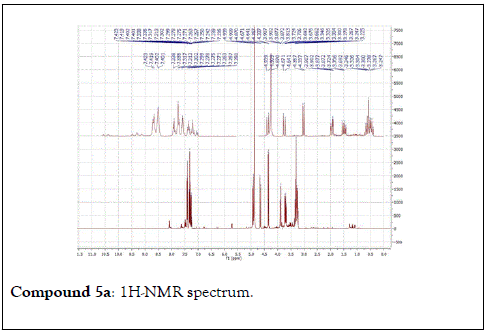 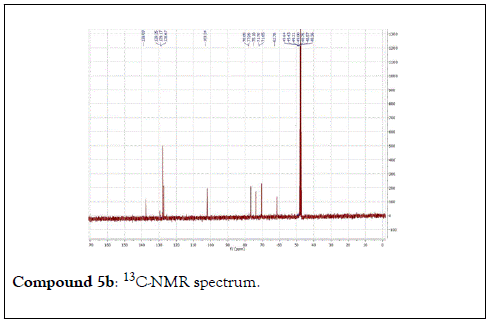 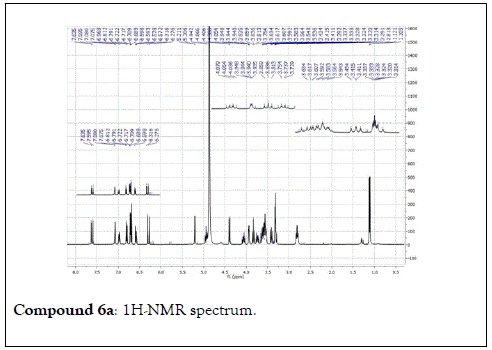 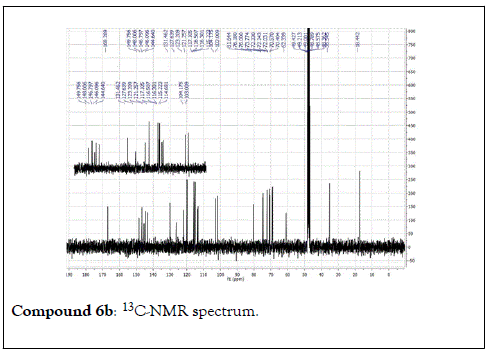 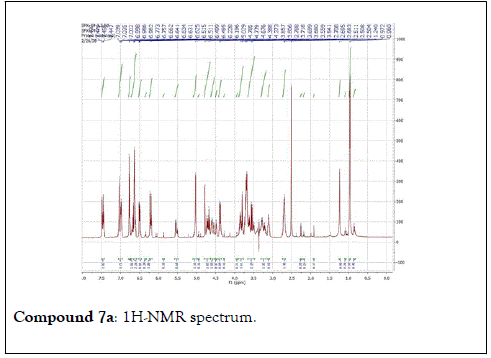 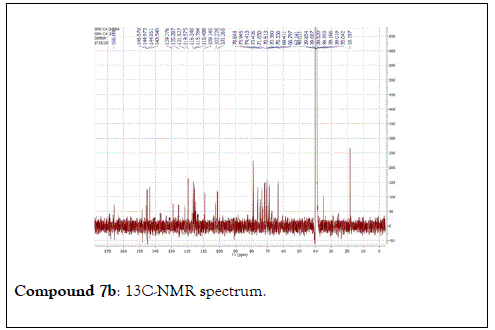 The pro-inflammatory cytokine TNF-α is believed to mediate inflammation and immune responses by activating NF-κB [20]. Since activated T-cells play a crucial role in the onset of several inflammatory diseases, the inhibition of transcription factor NF- κB represents a rationale for the development of novel and safe anti-inflammatory agents [21]. NF-κB is a member of the rel family which comprises important regulatory proteins and transcription factors that regulates several important physiological processes, including immune responses, inflammation, cell growth, apoptosis, tumorigenesis, and the expression of certain virus genes (HIV and CMV) as shown in Table 1. As a result, the NF-κB signaling pathway has been a target for pharmacological intervention, especially in models of inflammation or cancer, where the pathway is often constitutively active [22]. Our study revealed that the tested compounds (1-2) significantly reduced the activity of NF-κB induced by TNF-α, as shown in Table 2 and Figures 2 and 3, comparable to staursporine which is used as a positive control. 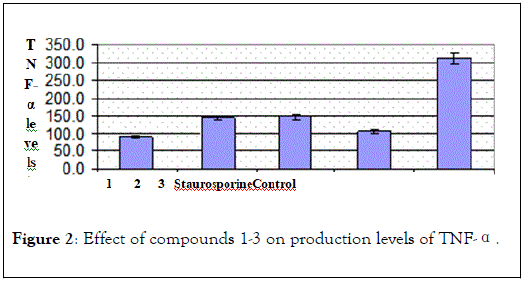 Figure 2. Effect of compounds 1-3 on production levels of TNF-α. 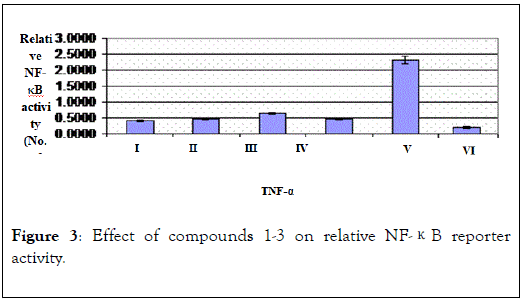 Data are presented as mean ± S.D, (n=3)
*p<0.05 compared with the group in which Jurkat T-lymphocytes cellswere not treated with test compounds

Seven compounds have been isolated from flowers of L. montevidensis. Notably,monoterpenoidal linalool glycosides (1-3) were reported for the first time from genus Lantana, in addition to four compounds have been reported for first time from our plant of concern. Compounds 1-3, linalool glycosides derivatives, showed promising anti-inflammatory activity by measuring TNF-α levels using ELISA technique and assessment of the ability of these compounds to inhibit NF-κB pathway. Compound 1 significantly reduced TNF-α production to 88.5 ± 3.12 pg/mL compared to the used positive control. Additionally, compounds 1 and 2 reduced the relative activity of NF-κB induced by TNF-α to 0.41 ± 0.01 and 0.47 ± 0.01, respectively.

We are grateful to the National Center for Natural Products Research, The University of Mississippi, School of Pharmacy, Mississippi, USA for their financial support including the USDA Agriculture Research Service Specific Cooperative Agreement No. 58-6408-2-0009.

The authors declare that they have no known competing financial interests or personal relationships that could have appeared to influence the work reported in this paper.

Copyright: © 2020 Mohamed NM, et al. This is an open-access article distributed under the terms of the Creative Commons Attribution License, which permits unrestricted use, distribution, and reproduction in any medium, provided the original author and source are credited.