Chemical EOR should be optimized by oil companies so that it would be much more widely applicable under different circumstances and conditions. However, the current employed chemical EOR has its limitations such as that the chemicals used in chemical EOR are usually costly and have certain application constraints. In this research, the effect of temperature, salinity, and concentration on the performance of Arginine as a surfactant for IFT reduction in chemical EOR has been investigated. IFT-700 has been used to find the interfacial tension (IFT) at, 40°C and 60°C, using three brine salinities: 10,000 ppm, 30,000 ppm, 50,000 ppm at varying surfactant’s concentrations. At each temperature, the experiment is repeated using different brine salinities and surfactant’s concentrations. Based upon the outcome of this study, it can be proposed that Arginine works best as an IFT reduction chemical at elevated temperature and low salinity environment.

These days, the world economic growth is expanding consistently, and so is energy consumption. Oil has been the most imperative and noteworthy source of energy up until now, and it will keep on contributing fundamentally to meet the future energy demand as well. This leads to the importance of improving the current production level for the coming years. This can only be done through either discovering new fields or enhancing the recovery rate from the currently available fields.

To cope with the current increased energy demand and the world’s demand for oil, oil service companies have been improving their recovery techniques and investing a lot in increasing the recovery using Enhanced oil recovery (EOR) methods. One of the aims of EOR is to reduce the interfacial tension and capillary forces and thus improve the displacement efficiency. Chemical EOR is one of the methods used to achieve such goals.

Chemical EOR vary from alkaline, surfactant or polymer flooding with all having the main goal to increase recovery. Surfactant flooding has proved its effectiveness, in significantly reducing the interfacial tension (IFT) between oil and water phases and increasing both of the Microscopic and Macroscopic efficiency.

Surfactant molecules are made up of two distinguishing structures, called lipophilic tail and hydrophilic head portions. Thus, they can be soluble in both polar and non-polar solvents [1,2]. Specific concentration of a surfactant solution is a characteristic point above which aggregates of surfactant monomers are formed which are referred as micelles. This characteristic point is known as the critical micelle concentration (CMC) [3]. The importance of CMC concept is that many surfactant-based petroleum applications use CMC value as the optimized concentration.

Chemical EOR should be optimized by oil companies so that it would be much more widely applicable under different circumstances and conditions. However, the current employed chemical EOR has its limitations such as that the chemicals used in chemical EOR are usually narrowly applicable, which means they usually don’t give the best results under different reservoir conditions. Moreover, they are usually costly and have a really bad impact on the environment such as contamination of ground water, excessive erosion and sedimentation and pollution of land and surface waters from the leaks of the employed chemicals.

Arginine is a water soluble, biocompatible amino acid with high salt tolerance at elevated temperatures which makes it suitable as an alternative chemical EOR agent. However, there hasn’t been much work done which reports the optimized working range of Arginine as a function of temperature, salinity at different surfactant’s concentrations. This research work discusses the effect of temperature and salinity on the performance of Arginine as an IFT reduction chemical.

Selecting a proper surfactant to apply is a challenging step in Chemical EOR. This project focuses on testing arginine, being a cost effective, environmentally-friendly, amino acid as a surfactant for IFT reduction under different temperatures and salinities and its potential applications in the oil industry.

There are 20 common amino acids which are called α (alpha) amino acids, having a carboxyl (COOH) and an amine (NH2) group bonded to the same carbon atom α (alpha carbon). They also contain a side chain known as R group. In addition to these common amino acids there are many less common ones as well.

Arginine is a chemical compound known as amino acid which belongs to guanidine group. For the Arginine it has very strong guanidine side chain which keeps Arginine to keep its protein unchanged in normal conditions (ambient pressure and temperature). There are two different types of Arginine which are dihydrochloirdes of Arginine-O-alkyl ester and Arginine-n-Alkyl amide where both of them contain in the polar head two positive charged group. These two positive charged groups implement functions for both amine and guanidine respectively.

The performance of surfactants is affected by the salinity; high salinity affects their performance negatively. Therefore, in such areas where the salinity is high, it is endorsed to utilize exceptional surfactants intended for high salinity resistance. For an ideal case, any surfactant should have optimum salinity resistance. Referencing to [6] explanation optimum salinity can be defined as salinity where the same amount of water and oil can make up micro emulsion by mutually solubilizing into each other where the IFT among these two phases is equal. This type of micro emulsion for the capacity of water solubility is closely related to the performance of co-surfactants between oil and water interfaces.

To ensure high efficiency in performing the activities, proper scheduling of the methodology stages has to be done.

In this study, an IFT measuring apparatus (model IFT–700.) that uses the pendant drop technique has been employed to measure the IFT of several crude oil-surfactant solution systems. The pendant drop method is a successful and well known technique to find the interfacial pressure of liquid-liquid or liquid-gas framework. Within the pendant drop method, the drop is made from a needle (capillary tube) in a bulk stage (fluid or gas) in a PVT-cell. The shape of the pendant drop is administered by gravity and the surface/interfacial pressure. A computer connected with camera will analyze the IFT value and also record the shape of the drop with Drop Analysis Software (DAS).

Whereas carrying out IFT estimation, the scale of the computerized picture is measured to obtain original size of the pendant drop. Once the scale is set, utilizing grey scale investigation, the shape of the drop is then decided. A shape parameter (B) is at that point balanced in a numerical method until the calculated drop shape matches the original shape (Figure 1). • The running process is calibrated and cleaned by using gasoline and distilled water.

• Both oil sample and surfactant solution are fed to sample cylinder of the IFT-700.

• The camera connected to computer will detect the generated drop which is created by calibrated capillary in the chamber as presented in Figure 1.

• CMC and optimum operating temperature conditions can be determined from the graph.

• The above steps are repeated at different brine salinities (Figure 2). After finalizing the experiments for the proposed samples, it was obvious that Arginine has shown positive results in IFT reduction between two fluids. Arginine which was prepared using a brine solution of 10,000 ppm, which has showed optimistic results for reducing the IFT at different Arginine concentrations and temperatures. However, when the brine solution was increased to 30,000 and 50,000 ppm, it was impossible to measure the IFT since there was no clear visible drop shape.

The experiment was done using Brine salinity of 10,000 ppm and ambient pressure at 40 degrees Celsius and 60 degrees Celsius. At elevated temperature there is a significant reduction in IFT due to decrease in CMC and less probability of hydrogen bond formation. The reduction in IFT values at high temperatures can mainly be attributed to the weaking of intermolecular forces created between Arginine/oil surface interface.

It is interesting to note that regardless of the concentration of the surfactant, the higher temperature gave the lesser values of IFT. However, the onset of micellization tends to occur at higher concentrations as the temperature increases (Table 3 and Figure 3). When the salinity was increased to 30,000 ppm there was no visible bubble shape available, so it was almost impossible to measure the IFT. There was no possible explanation to the faced issue; however, salinity values can be lowered to 15,000 ppm and 20,000 ppm and the optimized. Values can easily be located (Figures 4 and 5). 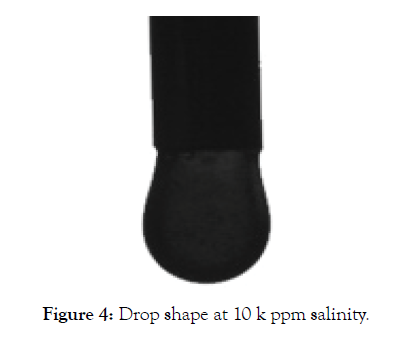 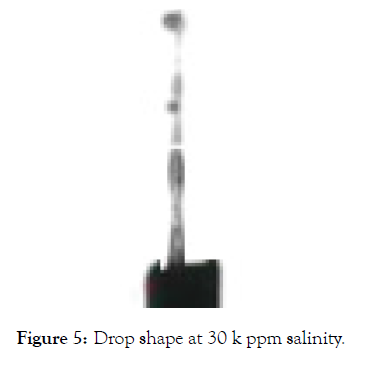 This particular research was conducted in order to test the ability of Arginine, which is an amino acid based surfactant, in terms of performance on reduction of Interfacial Tension under different conditions of temperature and salinity. The experiments based on this project were completed successfully. However, by conducting the experiment it was observed that Arginine is highly impacted by salinity. When the experiment was conducted at 10,000 ppm brine solution the results were explainable and the drop shape could easily be analysed, but when the experiment was conducted at 30,000 ppm brine solution it was not possible to get the results since there was no drop shape. Lastly, Arginine was tested at 40 degrees Celsius and 60 degrees Celsius and from the results it was evident that increasing the temperature had a positive effect towards reducing the IFT. According to the results, Arginine can be proposed for industrial uses at elevated temperatures and low salinities for enhanced oil recovery.

Copyright: © 2021 El-Brolosy AAII, et al. This is an open-access article distributed under the terms of the Creative Commons Attribution License, which permits unrestricted use, distribution, and reproduction in any medium, provided the original author and source are credited.