The inhibitory activity of hybrid liposomes (HLs), composed of 90 mol% L-α-dimyristoyl-phosphatidylcholine (DMPC) and 10 mol% polyoxyethylene (25) dodecyl ether (C12(EO)25), was investigated in human glioma NP2 cells. HLs with a hydrodynamic diameter below 100 nm persisted for 4 weeks. The inhibitory effect of HLs on the proliferation of NP2 cells was evaluated. Induction of apoptosis in NP2 cells treated with HL was measured through a PI assay and the TUNEL method. HLs caused apoptosis in NP2 cells through the mitochondrial pathway. An increase of AIF protein expression was observed in HL-treated cells. Cellular membrane fluidity of NP2 cells was also increased as revealed by the fluorescence depolarization method. Enhanced HL accumulation in the membrane of NP2 cells was observed.

According to the latest pathological classification, there are over 100 types of brain tumors [1]. Treatment of patients with malignant brain tumors is not limited to surgery and employs radiotherapy and chemotherapy as well. The brain has glial cells that surround and support nerve cells. Astrocytoma, oligodendroglioma, and ependymoma are examples of gliomas, which account for approximately 25% of brain tumors. Brain tumors are classified into 4 grades of malignancy on the basis of pathological characteristics. In comparison to grade 1 pilocytic astrocytomas and grade 2 oligodendrogliomas, anaplastic astrocytomas and anaplastic oligodendrogliomas of grade 3 and grade 4 glioblastomas are highly malignant.

We have produced hybrid liposomes (HLs) that can be easily prepared by sonicating a mixture of vesicular and micellar molecules in buffer solution [2]. Inhibitory activity of hybrid liposomes composed of L-α-dimyristoylphosphatidylcholine (DMPC), polyoxyethylene (20) sorbitan monolaurate (Tween 20) and antitumor drugs such as 1, 3-bis (2-chloroethyl)-1-nitrosourea on the growth of glioma cells have been previously described both in vitro and in vivo [3]. HLs, composed of DMPC and polyoxyethylene (25) dodecyl ethers (C12 (EO)25), are effective in inhibiting the growth of various cancer cells in vitro [4-8], in vivo [9-12] and for clinical applications [13]. HLs discriminate between the more fluid membranes of cancer cells and less fluid membranes of normal cells, preferentially fusing and accumulating in cancer cell membranes [14]. However, the inhibitory activity of HLs on the proliferation of glioma cells has not yet been elucidated.

The diameter (dhy) of HLs was measured by a light scattering spectrometer (ELS-8000, Otsuka Electronics, Osaka, Japan) using a He−Ne laser (633 nm) at a scattering angle of 90°. dhy was calculated using the Stokes-Einstein formula by the below equation, where κ is the Boltzmann constant, T is the absolute temperature, η is the viscosity and D is the diffusion coefficient:

The half-maximal inhibitory concentration (IC50) of HLs on the growth of NP2 cells was determined on the basis of a WST-8 [2-(2-methoxy-4-nitrophenyl)-3-(4-nitrophenyl)-5-(2, 4- disulfophenyl)-2H tetrazolium, monosodium salt] assay (Cell Counting Kit-8, Dojindo Laboratories, Kumamoto, Japan) [15]. NP2 (5.0 × 103 cells/ml) cells were seeded in 96-well plates and cultured in a 5% CO2 humidified incubator at 37°C for 24 h. Cells were cultured for a further 48 h after the addition of DMPC (0 ~ 2.0 × 10-3 M) and HLs (0 ~ 1.4 × 10-3 M depending on DMPC concentration). WST-8 solution was then added and the incubated for 3 h. The absorbance at a wavelength of 450 nm was measured using a microplate reader (Thermo, CA, USA). The inhibitory activity of HLs on the growth of NP2 cells was evaluated by Amean/Acontrol, where Amean and Acontrol denote the absorbance of water-soluble formazan in the presence and absence of HL, respectively.

Detection of apoptotic cells was performed by the TUNEL method using the In Situ Cell Death Detection Kit (Roche Diagnostics, Basel, Switzerland). NP2 cells (5 × 103 cells/ml) were seeded in dishes and cultured for 24 h. HLs ([DMPC]=3.0×10-4 M, [C12(EO)25]=3.33 × 10-5 M) or DMPC liposomes were added and cells were cultured for another 48 h. 4% paraformaldehyde solution was added for fixation. After formalin was removed, cells were washed with Hank's Balanced Salt Solution (HBSS). Impregnated solution was added and cells were stored in darkness at 4°C for 2 min. After cells were washed, TUNEL reaction mixture was added, and cells were then incubated at 37°C for 60 min within a humectant box. Stained cells were observed under a confocal laser microscope (TCS-SP; Leica Microsystems, Wetzlar, Germany) with a 488 nm Ar laser line for TUNEL (detection at 515–565 nm).

Assessment of AIF by flow cytometry

Fusion and accumulation of HL in the cell membrane

Data are presented as mean ±S.D. For statistical comparison, a Student ’ s t-test was performed. p<0.05 was considered to represent a statistically significant difference.

We examined the morphology of HLs on the basis of dynamic light scattering. HLs with a hydrodynamic diameter less than 100 nm remained viable for 4 weeks. In contrast, DMPC liposomes were unstable and precipitated at 14 days after preparation. These results suggest that HLs with a diameter below 100 nm can avoid recognition by the reticular endothelial system (RES) [17], and, therefore, would be appropriate for administration through intravenous injection both in vivo and in the clinic.

Inhibitory effect of HLs on the growth of NP2 cells

With respect to the inhibitory activity of HLs on the growth of human glioma NP2 cells, we examined the half-maximal inhibitory concentration (IC50) of HLs on the basis of a WST-8 assay. The results are shown in Figure 1. The IC50 value of HLs was 233.8 ± 9.8 μM, whereas that of DMPC liposomes was 806.6 ± 19.5. It was evident that HL potently inhibited the growth of NP2 cells. 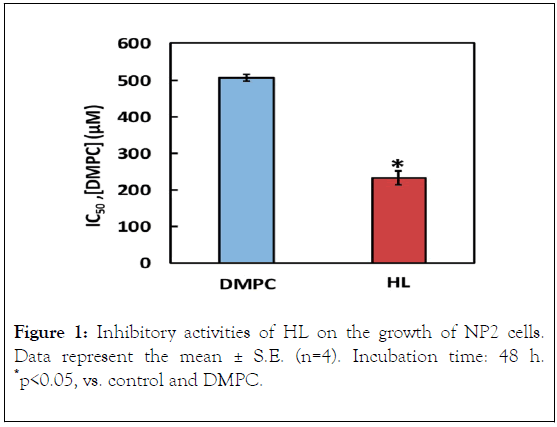 We evaluated the apoptotic fraction of NP2 cells treated with HL on the basis of a PI assay using flow cytometer. Results are shown in Figure 2A. Apoptotic cell fraction increased after HL treatment, in a dose-dependent manner. The apoptotic fraction reached high levels (more than 95% of cells). Next, the induction of apoptosis of HL-treated NP2 cells was evaluated on the basis of the TUNEL method using confocal laser microscope. Results are shown in Figure 2B. Green fluorescence was observed in cells treated with HL using TUNEL staining. In contrast, green fluorescence was not observed in the case of DMPC liposome-treated cells. These results indicate that HLs induced apoptosis in NP2 cells. 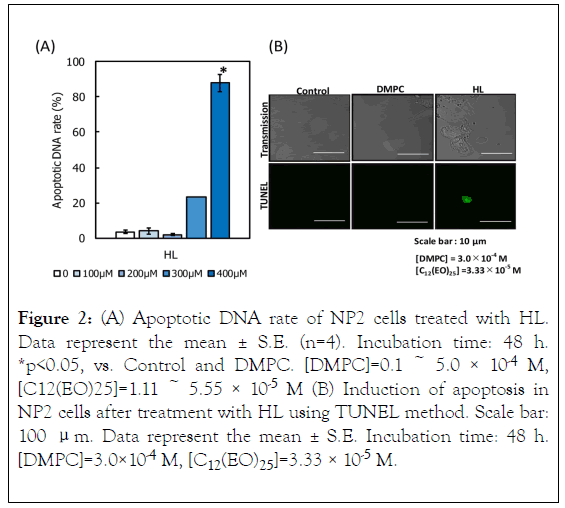 To investigate the apoptotic pathways triggered by HL treatment of NP2 cells, we examined caspase activation through flow cytometric analysis, as shown in Figure 3. Activities of caspase-3, 8, and 9 were not detected, suggesting that HLs induced apoptosis without their activation. Next, we investigated the mitochondrial pathway of apoptosis in HL-treated NP2 cells. The results are shown in Figure 4. After HL treatment, decreased mitochondrial transmembrane potential was observed in cells. Apoptosis inducing factor (AIF) is involved in initiating the caspase-independent pathway of apoptosis. Thus, AIF in NP2 cells treated with HL was measured through immunostaining and subsequent analysis by flow cytometer. The results are shown in Figure 5. AIF detected in NP2 cells after HL treatment was more abundant when compared to the levels detected in DMPC liposome-treated cells. Thus, AIF levels were increased in HL-treated cells. The data indicate that AIF was involved in the induction of apoptosis caused by HLs. These results suggest that HL induced apoptosis via AIF, through a caspase-independent pathway. 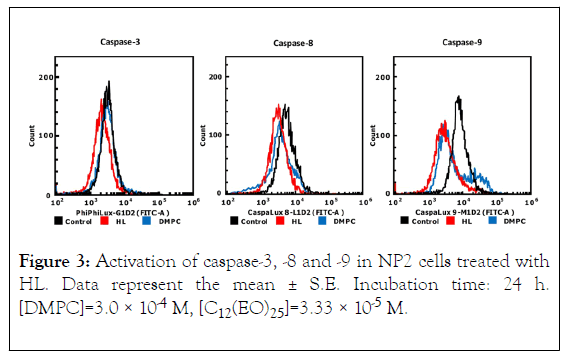 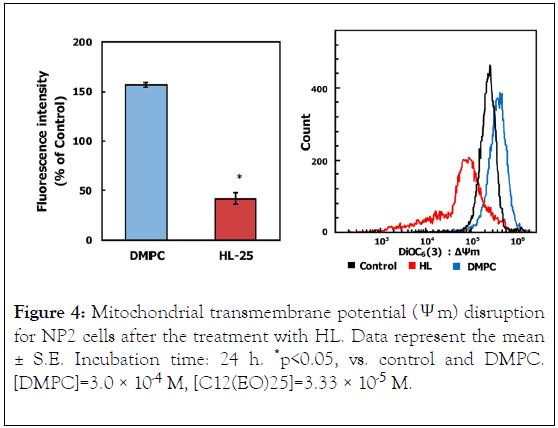 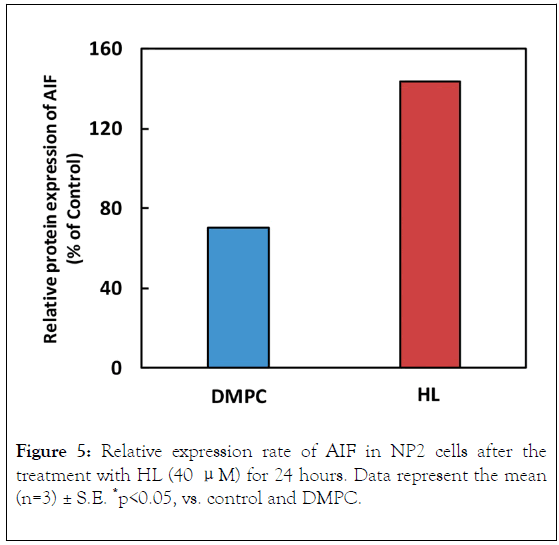 The fusion and accumulation of HL in NP2 cells was evaluated through flow cytometer. The results are shown in Figure 6. A time-dependent increase in HL accumulation was observed using NBDPC as a fluorescence probe. 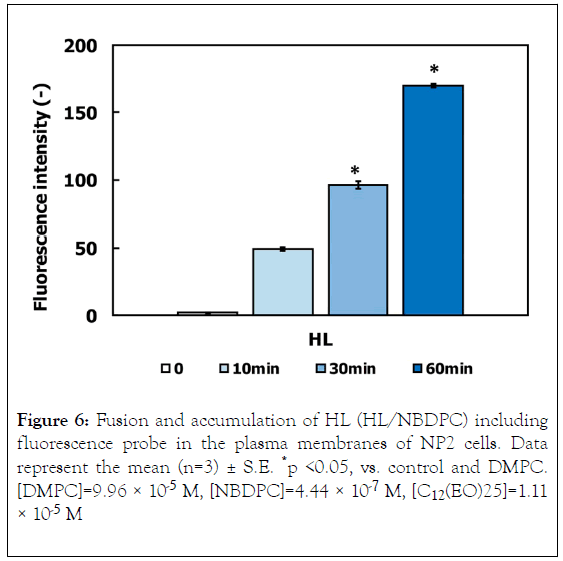 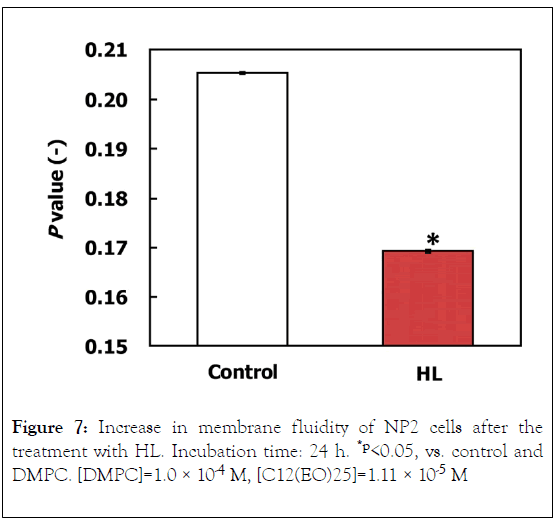 The current study demonstrated the inhibitory effect of hybrid liposomes (HLs) on the growth of human glioma NP2 (anaplastic astrocytoma) cells underlain by apoptosis induction through the accumulation of HL into cell membranes. The noteworthy findings are as follows: (a) HL with a hydrodynamic diameter less than 100 nm persisted for 4 weeks. (b) The inhibitory effect of HL on the growth of NP2 cells was observed, and it was driven by increased apoptosis. (c) HL caused apoptosis through the mitochondrial pathway. (d) HL induced apoptosis in NP2 cells via the release of AIF, a caspaseindependent pathway. (e) HL fused into NP2 cell membranes increasing their fluidity. A remarkably high inhibitory effect of HLs on NP2 cell growth was observed in vitro.

We thank Aya Yamashita for her technical assistance. This work was supported in part by a Grant-in-Aid for Science Research from the Ministry of Education, Culture, Sports, Science and Technology of Japan (Nos. 17K01383 and 17K05944).

Copyright: © 2020 Matsumoto Y, et al. This is an open-access article distributed under the terms of the Creative Commons Attribution License, which permits unrestricted use, distribution, and reproduction in any medium, provided the original author and source are credited.

Sources of funding : This work was supported in part by a Grant-in-Aid for Science Research from the Ministry of Education, Culture, Sports, Science and Technology of Japan (Nos. 17K01383 and 17K05944).