The using of nanotechnology in the welding process has great importance in developing the mechanical properties of welding joints for metals. This paper investigated the effect of addition TiO2 NPs to welding joints to improving the Impact toughness property of the welding joints. The cold spray coating method of the nanoparticles are used to adding the TiO2 NPs to the welding joints during the welding process. Three weight fraction are used for TiO2 NPs (0.75%, 1.5%, and 2%). The testing samples were prepared for Impact test, and microstructure by SEM. The results show the increasing in Impact toughness of welded joints with an increase of TiO2 NPs concentrations. The average Impact toughness for the welded sample without TiO2 NPs. was (162.4 J), while the average Impact toughness for the welded sample with (1.5)% TiO2 NPs. was (231.2 J) with improving rate of (42.36%). The Microstructure images by SEM show the adding of TiO2 NPs decreases the grain size and homogenous region in welded joints cross-section compared with a sample without adding TiO2 NPs. The EDS analysis show that increase Ti contain and decrease (Mn and Si) contain with increase TiO2 NPs.

Titanium dioxide (TiO2) NPs were used to create a new types of metal matrix composite materials (MMCM) in many engineering applications. TiO2 NPs have many suitable properties because of chemically stability, exhibits an efficient photocatalytic effect and nontoxic effects [1,2]. The disadvantages of traditional epoxy additives such as glass and rubber beads can be control of the application of TiO2 rising the strength, stiffness, and toughness without reducing its thermo-mechanical properties [3]. Also, the other types of TiO2, as well as TiO and Ti2O3, show the mechanisms of rising nucleation rate and ferrite grain delayed growth lead to effectual in rising the number of nucleation locations for intragranular acicular ferrite in welding zones [4-9]. During welding process, the decrease of TiO2 lead to the existence of titanium in the weld zone that may produce TiC, TiN and Ti2O3 results. In the weld zones, there are four kinds of ferrite can be appearing: intragranular acicular, grain boundary allotriomorphic, Widmanstätten, and intragranular idiomorphic. The intragranular acicular ferrite phase increase with increasing the TiO2 NPs. Its fine microstructure, nucleates intragranular in the shape of separate strips on non-metallic implying inside austenite grains [10]. The best combination of mechanical properties due to increase in density of high angle grain boundaries.

The different of crystallographic orientation in Grain boundaries lead to change crack growing direction by stand-in as strong barriers [10-13]. Fattahi et al. studied improving the mechanical properties of welding zone by the addition of TiO2 NPs to the electrode coating and investigated the effect of nucleation of intragranular ferrite. It was presented that the quantity of Titanium in the weld zone rising an acicular ferrite, while the Mn and Si quantities were reduced.

Also, the rise in the amount of Mn-Ti complex oxide inclusions in the welding zones lead to variation in the microstructure of columnar zones from Widmanstätten ferrite and allotriomorphic ferrite to fine intragranular ferrite. The other influence was improved the tensile strength and impact toughness properties of the welding zones due to the ultrafine grain size of the ferrite for the reheated zones [14]. Pal et al. used wire electrode consists of (1.5%) TiO2 micro particles, but (33.333)% of the TiO2 micro particles was replaced by TiO2 NPs. Four sample were tested, two samples without TiO2 NPs and two samples with TiO2 NPs through welding They obtained an improvement rate in tensile strength and Charpy impact [15].

The electrode coating by TiO2 NPs achieved improving in mechanical properties of the weld zones [14,15]. In this paper, the effect of TiO2 NPs on the Impact toufghness, the nucleation of intragranular ferrite, and microstructure of weld metals will be carried out in investigated using the cold spray coating method to add nanoparticles on welding joints. The Impact toughness and Microstructure of welded joints will be tested using addition TiO2 NPs through the thickness of welded joints of St-37 low carbon steel by using standard specification.

Three weight percentage (Wt%) of TiO2 NPs colloidal (0.75, 1.5, and 2)% was added to weld metal by the cold spray coating method were provided from US Research. Inc., anatase type with an average particle size (10-25) nm. The wire electrode AWS E6013 (4 mm diameter) was used to weld specimens. St-37 base metal was used for this research with dimensions of (250 mm × 200 mm × 20 mm). The chemical analysis of wire electrode and base metal are presented in Table 1.

The colloidal of TiO2 NPs was prepared by dissolving of (2.76, 5.53 and 7.37 g) in (20 ml) of distilled water to provide (0.75, 1.5 and 2)% wt. respectively according to equation (1) by using Magnetic Stirrer instrument (Jenway Company, UK), and mixed by Ultrasonic mixing liquid instrument (MTI Corporation company, USA) in the nanotechnology unit at the Faculty of Engineering at the University of Kufa.

A 20-mm thickness (St-37) low carbon steel was used and cut to (190 mm × 125 mm), and the preparation of Impact toughness specimen was (25). Five specimens from base metal (B), five of which were welding without the addition of nanoparticles (W), and the remaining fifteen by added of TiO2 NPs (0.75, 1.5, and 2)%, (S1, S2 and S3) respectively, five specimens for each ratio. The weld dimensions of the weld pool for the preparation and formation of the Impact toughness specimen were as shown in Figure 1 [16,17]. The specimens were welded by E6013 (4 mm) wire electrode dimeter at 200 A current by AC welding Machin, and then tested the welding by portable ultrasonic flaw detector instrument to detect the defects of welding before testing. Since the plate used for the design and preparation of specimen was 20 mm, the number of passes to fill the entire weld pool was fourteen pass distributed over seven layers (two pass for each layer) [17]. As according to our research procedure, the added nanoparticles were distributed only to the four middle layers because they are the only ones that include the diameter of the tensile specimen type and according to the method of addition nanoparticle mentioned above. Therefore, there was no need to add nanoparticles to the welding layers at the top and bottom of the welding area. After the full weld pool was filled. The specimen's surfaces were scraped a 5 mm by milling machine for each surface of the specimen. Final thickness of the specimens was 10 mm. The specimens were then being cut to 55 mm long and 10 mm width by an automatic horizontal band saw as shown in the Figure 1 with coolant solution [16,17]. The milling machine was used to preparation the weld specimen as shown in Figure 2. The impact testing was performed on a V-notched specimen with (500 J) value of kinetic energy. The specimens are fixed horizontally and hit with a heavy pendulum. The pendulum speed is about 4.8 m/s. Note that all operations were carried out at the mechanical workshop at Kufa Cement Plant. The type of instrument was used (HECKRT, Company, Germany origin) in the Applied Mechanics Laboratory at the Faculty of Engineering at the University of Kufa. Figure 2: Impact specimens after the test. 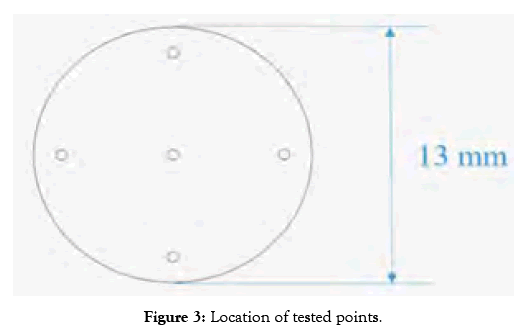 The selected specimens for (FE-SEM) test and (EDS) test were the same specimen used in microstructure test as shown in Figure 4. The tests were point and mapping. The type of instrument of FESEM and EDS tests was used (TESCAN, Mira 3, French origin). Figure 4: The prepared specimens for SEM and EDS tests. 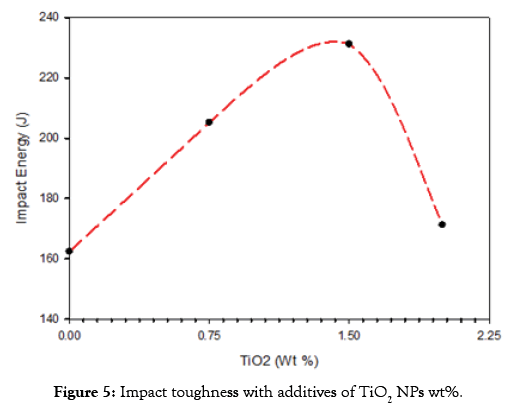 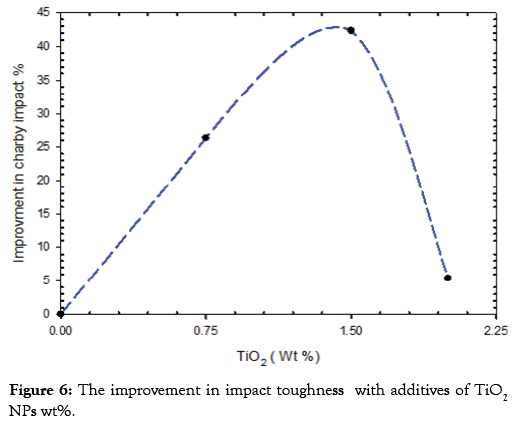 Figure 6: The improvement in impact toughness with additives of TiO2 NPs wt%. 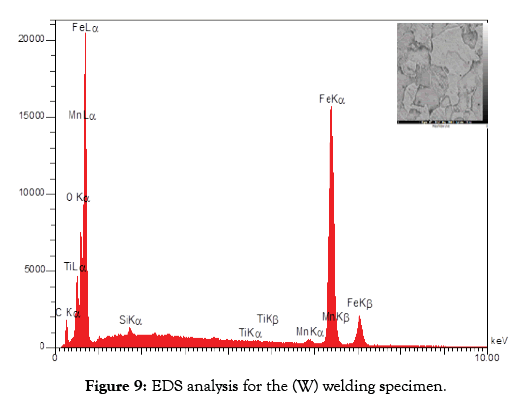 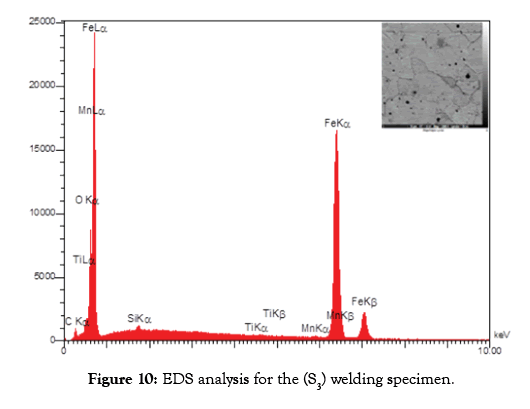 The effect of adding of TiO2 NPs colloidal to weld joints welded by wire electrode E6013 in arc welding method had been investigated. The Impact toughness, and microstructure of samples had been studied.

• With the adding of TiO2 NPs colloidal to the welding joints, there was an increase in Impact toughness for welding area about (42%) at adding ratio of TiO2 of (1.5%)

• Increasing the ratio of TiO2 NPs in welding joints above (1.5%) due to decrease in impact toughness. This is due to the increasing in the presenence ratio of oxygen.

• With the adding of TiO2 NPs colloidal to the welding joints, there was an increase in Ti contain and a decrease in Mn, Si contain, led to an increase in quantity of acicular ferritethat lead to reduce the size of grains .

• The grain size of the welding area by wire electrode (E6013) with adding of TiO2 NPs was decreased.

• The SEM test, showed that increasing the content of titanium oxide led to the conversion of columnar zones from Widmanstätten ferrite and allotriomorphic ferrite to fine intragranular ferrite and refining the ferrite grain size of reheated zones.

• Avaibility of data and materials

The results of data and materials presented clearly in manuscript but im not permission to present the data in manuscript as my co-authors refused that.

Our manuscript have no competing interest (finintial and non-financial).

We complete our manuscript without any funding, and spend on the manuscript from our money.

The contribution for authors in manuscript were equaly disributed among three authors.

The authors would like to acknowledge the assistance offered by Nanotechnology and Advanced Materials Research Unit (NAMRU) and Laboratories of Mechanical Engineering, Department at Faculty of Engineering, University of Kufa/Iraq and the authors are thankful the Mechanical Workshop in Kufa Cement Plant/ Iraq.

Copyright: © 2020 Al-Obaid AF, et al. This is an open access article distributed under the term of the Creative Commons Attribution License, which permits unrestricted use, distribution, and reproduction in any medium, provided the original author and source are credited.