Heterogeneous chemical equilibrium for ion exchange process between divalent metal counter ions in the coordination biopolymer metal-alginate complexes and the H+ ions of HClO4 acid electrolyte at a constant ionic strength of 0.1 mol dm-3 have been investigated using complexometric and titrimetric techniques. The factors affected the ion exchange processes such as the nature of the complexes geometrical configuration, the ionic radii of chelated metal ions, the bonding strength between the metal ions and the functional groups of alginate macromolecule and the temperature have been examined. The thermodynamic parameters of the ion exchange equilibrium have been evaluated and discussed in terms of the coordination geometry, strength of chelation and complexes stabilities. The experimental results indicated that values of the equilibrium constants of exchange were decreased in the order Mn>Co>Zn>Ca>Ni>Pb>Sr>Cd>Sn>Hg>Cu>Ba metal- alginate gel complexes, whereas the stability was increased in the same order.

Alginic acid is a naturally occurring carboxylated polysaccharide. It consists of a binary heteropolymer containing 1,4-linked-β- D-mannuronic and α-L-guluronic acid residues in a linear block copolymer structure [1-4]. The monomers are arranged in a clockwise manner around the macromolecular chains. It has a high affinity for chelation with polyvalent metal ions in particularly the divalent metal ions forming its corresponding coordination biopolymer metal-alginate complexes in either colloidal hydrogel or granule gel forms [5-8]. The inter diffused metal ion chelate two carboxylate and one or more pairs of hydroxyl functional groups of alginate macromolecule depending on the coordination number of chelating metal ion via formation of partially ionic and partially coordinate bonds, respectively, of an egg-box like structure [9,10].

It is well known that alginate as anionic polyelectrolyte has wide applications in medicinal, pharmaceutical such as in drug delivery and tissues engineering especially in cell encapsulation for tissue organ replacement as well as in the food industry. Also, these corresponding coordination biopolymer metal-alginates complexes have received some attention as biocatalysts in immobilization systems and water-based drilling fluids in industrial technology [11-15].

Although many physicochemical studies have been performed on coordination biopolymer of alginate polysaccharides such as the kinetics of oxidation [16-24], sol-gel transformation [23-25], thermal decomposition [26-29] as well as the electrical conductivity [30-34], a little attention has been focused to studies of the chemical equilibrium of ion exchange. Even though, Hassan et al. studied the chemical equilibrium for the ion exchange process of some metal-alginate complexes in the colloidal hydrogel forms [35,36]. They found that the ionic radii and nature of metal ion, as well as the strength of chelation between the chelated metal and functional groups of alginate macromolecule, are the determining factors for the exchange process. Unfortunately, the interpretation of such heterogeneous chemical equilibrium of ion exchange still remains not complete and poor understood.

In view of the above aspects and our interest in physicochemical studies on alginate polysaccharide [11-27], the present work seems to be of great significance to shed highlights on the heterogeneous chemical equilibrium of ion exchange and to compare the results which obtained with that reported earlier for complexes of gel forms [26,27]. The calculated thermodynamic parameters of the equilibrium constants of exchange were interpreted in terms of the relationship of between the geometrical configuration, strength of chelation and the gel complexes stability.

All other materials used were of Analar (BDH) grade. Doubly distilled water was used in all preparations. The temperature was controlled within ± 0.1°C.

Granule gels of coordination biopolymer metal-alginate gel complexes were prepared from sodium alginate powder by the replacement of its sodium counter ions, Na+, by the corresponding divalent metal ion. This process was performed by stepwise addition of sodium alginate powder to an aqueous solution of the corresponding metal ion electrolyte whilst rapidly and vigorously stirring the solution to avoid the formation of lumps which swell with difficulty. After completion of the exchange reaction, the metal alginate granules formed were washed several times with deionized water, then double distilled conductivity water until the resulting washing become free from the adhered non-chelated (free) metal ions. Then, the samples were dried at ~105°C under vacuum over anhydrous CaCl2 or P2O5.

Stoichiometric mixtures of the metal alginate complex and aqueous hydrogen ions (HClO4) of known concentrations were thermally equilibrated in a constant temperature water bath at the desired temperature within ± 0.1°C. The mixture was stirring continuously at constant rotation for about 24 hours using a magnetic stirrer.

After equilibrium had been attained, clear solutions containing both reactants were syringed out and the concentration of each metal ion and hydrogen ion was determined by complexometric and titrimetric techniques, respectively [37]. Every reading was an average of five experimental runs. The ionic strengths of the mixtures were maintained constant using NaClO4 as an inert electrolyte. In order to evaluate the thermodynamic parameters, these experiments were repeated at various temperatures.

Although a wide variation in anionic site density can be achieved with synthetic polyanions, no such systematic variation is possible with naturally occurring polyelectrolytes, the ion exchange is usually considered as an inherent process from the stoichiometric points of view [38]. Several empirical approaches have been reported to describe the ion exchange equilibria [39,40].

In view of these empirical approaches, the ion exchange between the studied divalent metal and hydrogen ions may be expressed by the following stoichiometric equation,

Where M denotes the metal ion, Alg is the alginate polyelectrolyte matrix and Alg2-M is the metal-alginate complex. Since, the exchange process is inherently a stoichiometric process [31-41], on applying the mass action law, one concludes that:

Where K is the equilibrium quotient and a`s are the activities of the constituents.

Where C is the concentration of the counterion A+ in appropriate units. When ln K` is plotted against CA+ and extrapolated to CA+=0, gives ln K. However, it appears that no particular advantage in that alternative treatment of defined by Equation (4) since our experimental observations showed no appreciable variation in Ka value within the variation of H+ ion concentration used [43-45].

Assuming that the mass action constant is not varied with the concentration of the interacting ions in order to avoid the complexity in the selection of a suitable procedure for evaluating the thermodynamic equilibrium constant, and considering that the activities of the solid phases are unity [43], Equation (2) can be rewritten in the form,

The values of Kc were calculated by using the least-squares method and are summarized in Table 1 along with that obtained earlier [31-41].

Table 1: The thermodynamic parameters for exchange equilibria of some divalent metal-alginate ionotropic gel complexes at I=0.1 mol dm-3.

The thermodynamic equilibrium constants were determined from the temperature dependence of the equilibrium constants. These parameters were calculated by the least-squares method and summarized in Table 1. The decrease of K values with increasing the temperature along with the observed negative values of ΔH° indicated that the exchange processes are of exothermic nature.

In these cross-linked metal alginate complexes, the interdiffused metal ions are chelated to the functional groups of the alginate macromolecular chains. This chelate is not just simple, but a sort of bridges is formed between the metal ion and two carboxylate groups and one or two pairs of hydroxyl groups depending on the coordination number of the chelated metal ion.

Two geometrical models were suggested for chelation [45]. The first geometry corresponds to an intramolecular association in which the functional groups involved in chelation belong to the same chain (planar geometry). The second type of geometry corresponds to an intermolecular association in which the functional groups are related to different chains (non-planar geometry). The two configurations are shown in Scheme I.

The magnitude of M-O bond energies, the orientation of macromolecular chains of alginate and the coordinated water molecules toward the chelated metal ions as well as the nature of metal ion will largely affect the physical, chemical and mechanical properties of these metal alginate complexes to a large extent. As shown in Table 1, the magnitude of Ka decreases in the order Mn>Co>Zn>Ca>Ni>Pb>Sr>Cd>Sn>Hg>Cu>Ba-metal-alginate complexes. This means that the stability of the metal complexes increases in the same order [8-11]. Again, such a trend of the stability was found to agree with that reported in metal-oxygen strength [46-48]. The observed differences between the K values obtained with respect to the metal-alginate complexes in the gel forms (values between parenthesis in Table 1) and that of the complexes in the granules form can be interpreted by the presence of capillaries in the alginate gels in the gel forms but not in granule forms. These capillaries will enhance the exchange process between the chelated metal ions in the metal-alginate complex and the H+ counter ions of the electrolyte. Thus, in turn, will increase the corresponding K values as was experimentally observed [35,36].

Moreover, the reactivity of the metal ions and the strength of chelation play very important roles in the stability of these metalalginate complexes. The reactivity may be influenced by the orientation of the macromolecular chains toward the chelated metal ions. Barium (II) and copper (II) are more oriented in their alginate complexes, and, hence, having more stability [47,48], whereas cobalt (II) and manganese (II) having lower orientation and, hence, showed lesser stability. In fact, the strength of chelation depends on the metal-oxygen bond energies. The bond energies of metal-oxygen were found to be in good consistent with the proposed order of stability which increases in the same direction [49].

There are several factors such as ionic radii, mobility, and polarizability of metal ions which affect the exchange process between the exchanging counter ions and, hence, the chemical equilibria of exchange. The mobility of the metal ion tends to increase with decreasing its ionic radius, which in turn causes an acceleration of the exchange process. As the exchange process increases, the equilibria tend to shift toward the forward direction and vice versa. The experimental observation of Kc values for these metal alginate complexes are consistent with the variation of the corresponding ionic radii [50]. A plot of ln K vs the ionic radii was fairly linear as shown in Figure 1, indicating the reactivity correlation between these metal complexes. Again, Ba(II) ion is less polarizable and, hence, possesses the smaller value of the equilibrium constant of exchange and has more stability in its metal-alginate complex [51]. On the other hand, Mn(II) ion has higher polarizability and, hence, a larger value of the equilibrium constant. It means that Mn(II)-alginate complex is the less stable [41-51]. 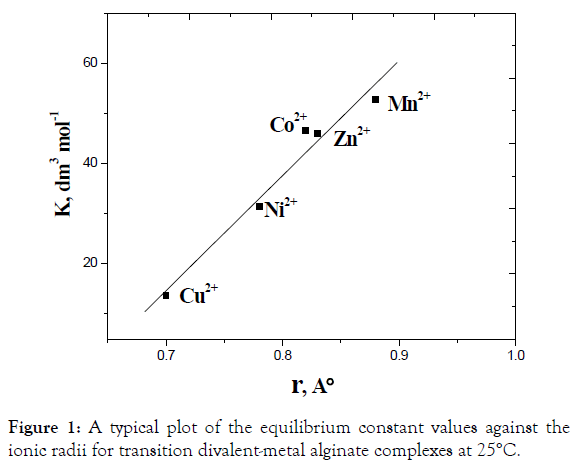 Figure 1. A typical plot of the equilibrium constant values against the ionic radii for transition divalent-metal alginate complexes at 25°C.

The values of ΔG° may reflect the stability of these alginate complexes which agree with the suggested order of stability (Table 1). Despite the variation of the chelated metal ions, the values of ΔG° seemed to be the same indicating the similarity of the exchange process in these metal complexes [50,51].

Stepwise addition of sodium alginate powder to an electrolyte solution of polyvalent metal ions with vigorous and contentious stirring leads to the formation of coordination biopolymer metalalginate complexes of granule shapes. The chelated metal counter ions in these formed complexes can be replaced by other ions in particularly by hydrogen ions of HCl electrolyte solutions. Several factors will affect the physicochemical properties of the ion exchange processes such as the nature of the complexes geometrical configuration, the ionic radii of chelated metal ions, the bonding strength between the metal ions and the functional groups of alginate macromolecule and the temperature. The equilibrium constants were determined from the well-known chemical equilibrium equations. The experimental results indicated that values of the equilibrium constants of ion exchange were increased in the order Mn<Co<Zn<Ca<Ni<Pb<Sr<Cd<Sn<Hg<Cu<Ba coordination metal-alginate complexes, where the stability was decreased in the same order.

Copyright: © 2019 Hassan RM, et al. This is an open-access article distributed under the terms of the Creative Commons Attribution License, which permits unrestricted use, distribution, and reproduction in any medium, provided the original author and source are credited.