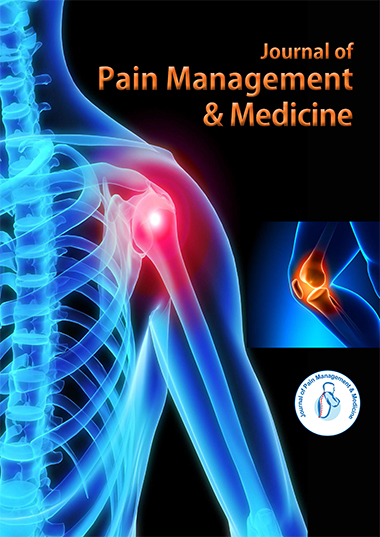 Background: Immediate pain management in patients presenting to the emergency department with acute fractures is obviously of utmost importance. However, this can be extremely challenging in situations like prior history of opioid abuse.

Methods: 128 patients with history of opioid abuse presenting to the emergency department with acute single fracture of long bones in either upper or lower extremities were included, randomized and received morphine (50 μg/kg) or morphine plus Ketamine (50 μg/kg morphine/100 μg/kg Ketamine) intravenously after obtaining informed consent. Pain severity was assessed using visual analogue pain scale before and after receiving the pain medication at 15, 30, 60 and 90 minutes.

Results: Severity of pain in treatment groups was not significantly different before treatment (7.48 ± 1.6 vs. 8.07 ± 1.5 for morphine and morphine/Ketamine groups, respectively, p value >0.05). The severity of pain in both groups significantly decreased following medicating but statistical analysis between 2 groups did not show any significant difference between study groups at any time point (p value >0.05). However, side effects significantly higher in the morphine/Ketamine group (82.6% vs. 46.2%, p value<0.001).

Conclusion: Ketamine in addition to morphine does not improve pain control in patients with acute osseous fracture of extremities and history of opioid abuse; it also results in more side effects compared to using morphine alone. Based on these findings, we recommend against cocktailing intravenous morphine with Ketamine for immediate pain relief in this patient population.

Ketamine is well-known general anesthetic and analgesic acting on N-methyl-D-aspartate (NMDA) receptor as an antagonist. Ketamine demonstrates its analgesic effects via enhancement of the inhibitory control of pain perception through descending pathways, increasing the peripheral anti-nociceptive effect of opioids, and preventing opioid tolerance, as well as other mechanisms [1-6].

Preoperative and immediate pain management in chronic abusers of opioid can be a challenge due to tolerance and might require higher doses of any analgesic such as morphine. The high doses used and co-morbidities may lead to serious complications [7]. Therefore, alternative approaches have been suggested in these circumstances such as dose titration and replacement therapy under close monitoring as well as using opioid sparing NMDA receptor antagonists such as ketamine as adjunct to routine opioid pain control regimen [7].

There has been a constant debate in regards to the most appropriate preoperative analgesic regimen in opioid abusers. Multiple studies have been performed resulting in mixed findings. Even though, a growing body of evidence suggests that Ketamine has opioidsparing effects in pre-, intra- or postoperative states [2,3,8-10] other studies have resulted in controversies [11-14].

Based on the previous studies and suggested opioid-sparing effect for ketamine, we hypothesized that ketamine in addition to morphine might improve immediate pain management in patients with history of opioid abuse presenting to the emergency room with acute osseous fracture of the extremities. A prospective case control study was designed and patients were assigned to either morphine alone or morphine/ketamine cocktail intravenous regimen and severity of pain was assessed before and after analgesic administration at multiple time points.

This prospective case-control study was performed in Tehran University of Medical sciences in Tehran, Iran between April 2012-December 2013. Patients presenting with acute single fracture of the long bones of upper or lower extremity presenting to Sina Hospital (A teaching affiliate of Tehran University of Medical Sciences) were included in the study and history of opioid abuse were included in the study.

Other inclusion criteria included age above 18 years and acute fracture defined as less than 24 hours between injury and presentation to ED. Patients with history of psychological disorders, history of alcohol abuse, consuming antipsychotics, altered mental status, moderate to severe head trauma resulting in GCS less than 15, seizure, pregnancy, hepatic, renal or cardiovascular disorders were excluded from the study.

The local ethics committee at Tehran University of Medical sciences approved the study protocol. Patients were asked to take their daily dose of opium or methadone prior to the study if they have not already taken their daily dose. Patients were blindly assigned to either treatment (morphine/ketamine) or control group (morphine only) and after initial evaluation of the pain severity received intravenous injection of 50 μg/kg morphine in combination with100 μg/kg Ketamine or 50 μg/kg morphine, respectively. According to the initial design, first researcher prepared the medications and in morphine only group (control group) the solution was diluted to similar volume as morphine/ketamine cocktail for complete blinding. A second researcher who was blind to the grouping of the patients and composition of the medications was in charge of medication the patients and evaluating the pain score. Medications were infused slowly over 2-3 minutes through an IV line placed by the nursing staff in the unaffected upper extremity and prior to each injection the IV line was flushed with 10 cc of normal saline to make sure it is working properly. According to the study design, patients were informed that they are allowed to ask for extra pain medication at any time during the study and extra pain medication was injected only per patient request.

Pain was evaluated prior to treatment as well as multiple time points after injections at 15, 30, 60 and 90 minutes. Visual analogue scale was used for the assessment of patients pain with scores between 0-10 while 0 represented no pain and 10 was the worst imaginable pain [16].

The data were analyzed using SPSS v.15 software for Windows (Chicago, USA). Descriptive data were reported using parameters such as frequency, mean and standard deviation (SD). To compare the differences between the frequency of qualitative variables and quantity of quantitative variables between study groups Chi square and student t-test were performed, respectively. For more accuracy, analysis after exclusion of patients requesting more pain medication was performed as well as intention to treat analysis A 5% probability of a type I error (two-tailed), and a power of 80% were considered in the analysis. All reported P-values are two-tailed.

Following careful evaluation of all patients for inclusion and exclusion criteria, 128 patients presenting with single traumatic fracture of upper or lower extremity and history of opioid abuse were included in the study. 63 patients were assigned to morphine/ ketamine group and the rest (65 patients) received morphine as controls as showen in Figure 1. 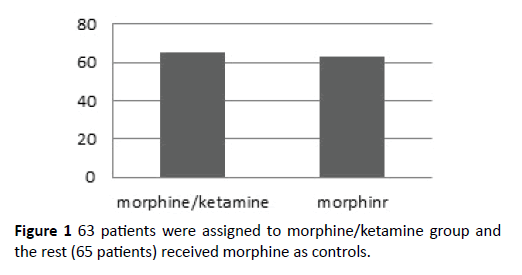 Figure 1: 63 patients were assigned to morphine/ketamine group and the rest (65 patients) received morphine as controls.

The mean age for the patients in morphine/ketamine group and controls were 42.71 ± 19.22 and 38.54 ± 15.75, respectively with no significant difference (student t-test, p value=0.18). Gender distribution was also similar in both groups with 13 females in each group (20.6% for the morphine/ketamine and 20% for the control group, analysis not shown).

Average pain score prior to medicating was 8.07 ± 1.50 in the morphine/ketamine group and 7.84 ± 1.60 without statistically significant difference (student t-test, p value=0.39). Even though pain severity significantly decreased after receiving the pain medication in both groups, there was no statistically significant difference between the treatment regimens at any time point during the study (Table 1). Mean time before asking for the second dose of pain medication in the morphine/ketamine group was longer than the control group (168.33 ± 142.91 vs. 124.92 ± 129.29), however this did not reach statistical significance (student t-test, p value 0.07).

Analysis of the patients receiving single dose of pain medication

34 patients in the morphine/ketamine group and 27 patients in the control group never asked for extra dose of pain medication during the 90-minute evaluation. Further analysis among these patients shows a significantly lower pain level before initiating the study among the controls (7.85 ± 1.67 vs. 6.88 ± 1.50, respectively, student t-test, p value=0.02). However, even with the initial difference, no statistically significant difference was found at any time point during the 90-minute evaluation (Table 2).

Side effects were evaluated before and after excluding the patients asking for extra pain medication and either way morphine/ketamine resulted in a significantly higher rate of adverse reactions (analysis not shown). All the side effects were evaluated and recorded by the physician assessing the pain severity either according to patient expression (nausea, diplopia) or physical examination (Altered mental status, confusion, delusion and nystagmus). The most important side effects were altered mental status, nausea/vomiting, confusion, delusion, diplopia and nystagmus. A comparative table comparing the difference in the incidence of side effects between 2 groups is provided as Table 3.

Table 3: Side effects incidence of treatment per treatment regimen.

Pain management in opioid abusers has always been a challenge. Opioid abuse may cause different hormonal or immunologic alterations in this patient population and has several complicated behavioral and psychological aspects, which may present as physical or behavioral disorders. There might also be other conscious or unconscious incentives in forcing the patients to come to the emergency rooms. Tolerance and alterations in neural pain pathways are also other real concerns. Though, several strategies have been introduced in order to better control the pain and decrease the overall required opioid dose to avoid the possible and serious side effects such as adding ketamine to the pain management regimen.

There has been mixed results in regard to the opioid-sparing effects of ketamine and several studies have recommended against its additional value [11-14], while others showed some beneficial effects for ketamine in terms of better pain management and decreasing the overall opioid dose required for optimal pain control [2,3,8-10]. Jensen et al. performed a randomized trial and compared 2 mg/ml of morphine with 2 mg/ml of both morphine and ketamine by intravenous patient-controlled analgesia (PCA) in patients undergoing uterine artery embolization and at the end, failed to demonstrate any morphine sparing effect for ketamine [12]. In another series of elective orthopedic surgery patients published by Stevicic et al. morphine PCA (1.5 mg bolus dose) was compared to morphine/ketamine PCA (1.5 mg bolus dose of each) in postoperative state and no significant differences were found in respect to pain control or side effects [13]. In another study on thoracic surgery patients, low dose ketamine (1.2 mg/ hour) was added to epidural postoperative analgesia (0.12% levobupivacaine, 2 μg/mL of fentanyl, 0.2 mg/mL ketamine versus 0.12% levobupivacaine, 2 μg/mL of fentanyl) and there was no difference in post-thoracotomy pain [14]. On the other hand, there were several studies demonstrating opioid-sparing effects for ketamine such as the randomized clinical trial performed by Gharaei et al. in 2013 comparing the total dose of remifentanil used to control the pain in 2 groups of opioid abusers undergoing extracorporeal shockwave lithotripsy with or without receiving 0.1 mg/kg intravenous ketamine at the beginning of the procedure and showed significant opioid-sparing effects for ketamine.

Despite multiple previous studies, there is no consensus on the opioid sparing effect of ketamine and most importantly, Elia et al. in 2005 systemically reviewed the randomized trials of ketamine in surgical patients and reviewed fifty-three trials from 25 countries using different methods but concluded that despite many randomized trials published up to that date role of ketamine in perioperative analgesia remains unclear as most studies had contradicting results [11].

In the current study, we compared the effectiveness of morphine/ ketamine cocktail (50 μg/kg morphine/100 μg/kg Ketamine) to morphine alone (50 μg/kg morphine) in immediate pain control in opioid abusers coming to the emergency department with single fracture of the upper or lower extremity. Adding ketamine to morphine did not show a benefit in adding ketamine morphine for pain control in this patient population but also resulted in significantly higher incidence of side effects. These findings were in agreement with multiple previous studies as discussed above. In conclusion, we will recommend against routine addition of ketamine to morphine in opioid abusers coming to emergency room with osseous fractures of the extremities as this might result in unwanted subsequent adverse effects.

Copyright: © 2020 Amiri H, et al. This is an open-access article distributed under the terms of the Creative Commons Attribution License, which permits unrestricted use, distribution, and reproduction in any medium, provided the original author and source are credited.