Dracocephalum moldavica L, Lamiaceae is commonly consumed as a food-related product and as an herbal plant. According to new ways in UV effects on live organisms, this research was studied. It deals with the effect of UV-A and UV-C bands on the herbaceous drug. The plants were grown in a uniform environment in the culture room and exposed to UV rays (20 minutes UV-A daily and UV-C for 10 minutes) after 10 days in six weeks. Indices of fresh and dry weight of aerial and root organs, leaf area, chlorophyll a, b and total chlorophyll content were investigated. The results of the comparison of the mean of the studied traits showed that there was a significant difference between treatments, so that the highest amount of each of the traits was related to the control treatment and the least amount was related to treatment of UV-C bands. This study shows the sensitivity of the plant to the UV rays and the sensitivity of the plant to UV-C bands is higher than the UV-A bands.

Dracocephalum moldavica is an herbaceous, annual plant originating from southern Siberia and Iran northern (Lahijan, Ahandan Amlash and Rasht). The herbaceous material is sedative and appetizing. It’s essential oil has antibacterial properties and is suitable for stomach ache and bloating and it is also used in health, cosmetics and food industries. Moldavian balm (Dracocephalum moldavica L, Lamiaceae is commonly consumed as a food-related product and as an herbal preparation because of its reputed medicinal properties. Despite its importance, few reports exist in the literature regarding the chemistry or antioxidant activity of this species [1]. The Moldavian dragon’s head (Dracocephalum moldavica L.) is an annual, herbaceous, essential oil-producing, spicy aromatic medicinal plant of the deadnettle family (Lamiaceae), which reaches 25-75 cm in height [2]. Its use was reported in West Azerbaijan (Iran) folk medicine as a general tonic, stomachic, digestive, antiemetic, sedative and diaphoretic [3]. Tincture of the dry herb has been used for ages in Uyghur folk medicine to treat heart disease, blood pressure, angina, tracheitis, atherosclerosis, neuralgia, migraine and headache and toothache [4]. Since the 1970s, 246 compounds, including terpenoids, steroids, flavonoids, alkaloids, lignans, phenols, coumarins, and cyanogenicglucosides, have been identified from the genus Dracocephalum and Terpenoids are the dominant constituents within the genus [3,5]. D. moldavica contains 0.06-0.92% essential oil, with the maximal level during flowering. Its lemon-like scented essential oil consists mainly of oxygenated acyclic monoterpenes, e.g. geraniol, geranyl acetate, geranial, neral and nerylacetate [6]. Plants sensitive to UV may also respond by accumulating UV-absorbing compounds in their outer tissue layers, which presumably protect sensitive targets from UV damage. The key enzymes in biosynthetic pathways of these compounds have been shown to be specifically induced by UV irradiation via gene activation [7]. UV radiation above ambient may inhibit plant growth, development and reproduction and depress photosynthesis. It has been reported that the plant possesses antibacterial, antioxidant and cardioprotective effects [8,9]. A recent study showed that D. moldavica also has sedative effect. Although, the D. moldavica was popularly used in traditional medicine for pain relief, there have been no published reports regarding its antinociceptive effect. As a result of the increase in greenhouse gases, surface temperature will increase in the near future between 4.18 and 4.1°C. This will lead to increase in the temperature of the planet and will also increase the concentration of the atmospheric carbon dioxide, such as chlorofluorocarbons (CFCs), reduce the ozone layer and thereby increase the transmission of ultraviolet radiation [10]. UV-A (390-320 nm), although not absorbed by the ozone layer, causes the least damage to living organisms. UV-C bands (280-245 nm) have deleterious effects on living organisms. The harmful effects of this radiation on plants include reducing the photosynthesis process, decomposing proteins and nucleic acids, oxidative stress, and reducing the amount of photosynthetic pigmentation [11]. UV radiation not only affects physiological and biochemical processes, but also affects the structure of plants. In most plants, altitude reduces leaf area loss, which is a protective mechanism against UV-damaged injuries. The purpose of this study was to investigate the effects of UV-A and UV-C banding on growth indices, photosynthetic pigmentation rates in herbaceous plant. To achieve maximum heterosis, the researchers searched for the varieties or accessions which were far, in genetic traits, from each other for finding the best parents in each crossing [1].

The seeds of the plant were collected from the Agricultural and Natural Resources Research Center of Guilan province in Rasht city which cultured from Lahijan and Ahandan regions in Guilan eastern and disinfected with 10% sodium hypochlorite and planted in ductile beds in a bed of sand and soil mixture of 5 to 1. The pots in growth chambers with light period of 16 hours of light and 8 hours of darkness and temperatures between 27 ± 2°C per day and 16 ± 2°C at night were fed daily with a half-strength Hoagland solution. After 6 weeks, the radiation required for UC-A treatment by two lamps (F20T9 / BLHitachi, Japan) and the radiation required for UV-C treatment by a lamp (TUV / G30T8-Philips, Holland) for 10 days and Daily (UV-A for 20 minutes and UV-C for 10 minutes). After removing the specimens, the shoot and root were separated and the weight of each one was measured in grams. The leaf area of the plants was calculated using a scan machine and computer software Flachenberechnung-einer0sw- Grafik. Chlorophyll a, b and total leave of control and treated plants. The method of Lichtenthaler and Wellurm (1983) was measured. Data analysis was performed by way of ANOVA and the comparison of the mean of the treatments based on Duncan’s multi-domain test using SAS software version 9.2 [11-13].

The results of variance analysis of the studied traits showed that the effect of UV treatment on the measured traits was significant at the probability level of 1% (Table 1). Investigation of UV-treated samples showed that fresh weight of root and shoot in UV-C significantly decreased (Figure 1A-D). Also, dry weight measurements of treatments and control plants showed that this radiation reduced the dry weight of the air and root organs. This decrease in airship was significant especially in UV-C treatment (Figure 1). The weight loss of plants exposed to UV radiation has previously been reported in bean plants and Impatiens capensis [14,15]. Reducing the photosynthetic process in plants exposed to UV rays is the main cause of dry weight loss. Reduction in dry matter production in rice has been reported due to reduced leaf area and photosynthesis Analysis of variance of the effect different bands of UV on plant measured characteristics and mean significant at 5% and 1% probability levels, respectively and respectively represents a significant level at the probability level of 5 and 1 percent (Table 1). Based on the results obtained in this study, UV rays reduced the leaf area of treated plants that significantly decreased UV-C treatment (Figure 1). The highest leaf area was obtained from control treatment and the lowest leaf area was obtained from UV-C treatment. Reduction of leaf area for cotton leaves [9] and Fagopyrum tataricum has also been reported [10]. The main cause of the decrease in leaf area is that UV radiation prevents cell division, and the reduction in cell division due to UV-induced oxidation of tubules is delayed in the formation of microtubules and reduced levels of division, or prevents the transcription of histone proteins and thereby prevents cell division. Plants sensitive to UV may also respond by accumulating UVabsorbing compounds in their outer tissue layers, which presumably protect sensitive targets from UV damage. The key enzymes in biosynthetic pathways of these compounds have been shown to be specifically induced by UV irradiation via gene activation [7]. The rice plant was affected by the UV-B rays of the chlorophyll a / b ratio, which is due to the fact that UV affects the amount of chloroplast proteins and the permeability of the chloroplast membrane and light-collecting proteins in the PSII reaction center and the rosibosome enzyme it affects. It has also been reported that the reduction of photosynthetic pigmentation against UV rays due to chlorophyll degradation by light and the reduction of the chlorophyll synthesis rate is due to a reduction in the gene expression of chlorophyll-bound protein [16,17]. In this study, Deracocephalum moldavica L plant was sensitive to various UV bands and its growth indices were affected. Our results also showed that the sensitivity of this plant to UV-C radiation is higher than that of UV-A [18-20].

Table 1: Analysis of variance of the effect different bands of UV on plant measured characteristics. 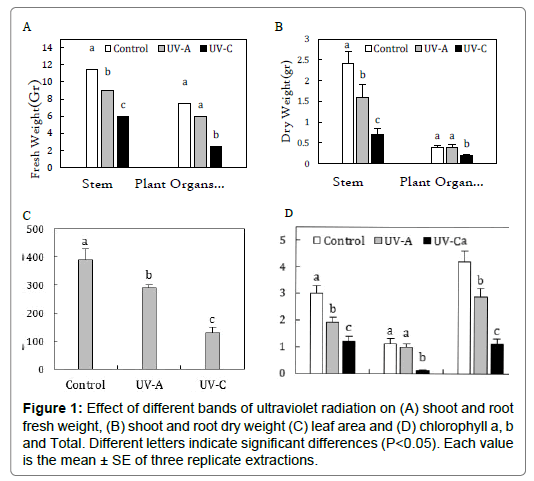 Figure 1: Effect of different bands of ultraviolet radiation on (A) shoot and root fresh weight, (B) shoot and root dry weight (C) leaf area and (D) chlorophyll a, b and Total. Different letters indicate significant differences (P˂0.05). Each value is the mean ± SE of three replicate extractions.

We may conclude about the effects of different bonds on this kind of medicinal plants which also will be used as essential source of disorders towards humans. This saying informs future researching to improve this herb into the in vivo and in vitro conditions. The study shows that Dracocephalum plants are sensitive to UV-C and UV-A with trend to UV-C and this finding give an insight into the physiological and morphological changes during UV exposure and indicate the sensitivity of these plants to UV-C more than UV-A radiation. For further improvements, we suggest to completely focus on Growth indexes and Chlorophyll to be sureness.

Copyright: Â© 2019 Ahandani EA, et al. This is an open-access article distributed under the terms of the Creative Commons Attribution License, which permits unrestricted use, distribution, and reproduction in any medium, provided the original author and source are credited.