Many drugs can be toxic to the liver, leading to severe or even fatal liver damage in some patients. In Algeria, the description and the incidence of this adverse effect (AE) remain unknown. In addition, no paraclinical examination confirms the diagnosis of drug-induced liver injury (DILI) because it relies essentially on so-called specific algorithmic causality assessment methods (CAM).

The objective of our study was to describe DILI cases at university hospital establishment of Oran (UHEO) and to contribute to the diagnosis and management of these cases.

A descriptive study (June 2011 - August 2017) was conducted on archived declarations in our service or on new reports from the various departments of UHEO. A special form has been designed to collect the information necessary for causality assessment. After collecting informations, the causality was assessed by a DILI-specific causality assessment method (CAM): the CIOMS scale.

At the end of this study, 33 DILI cases were reported, representing 15.1% of all registered drug AEs with an average age of 39.6 years and a sex ratio of 0.8 in favor of men. We noticed that this AE occurred for the majority of cases in the first 84 days. All reported DILI cases were acute, 61% of which were hepatocellular, 9% cholestatic and 27% were mixed. Stopping the drug was the most common strategy of DILI management (70% of cases) and 60% of cases progressed to complete recovery. According to the CIOMS scale, 59% of the incriminated drugs were antibiotics, followed by antiepileptics and diuretics (16%).

Our work has therefore helped to describe this AE as well as to highlight the limitations of diagnosis and management.

Drugs may be toxic to the liver, resulting in serious or lifethreatening liver injury [1].

Drug hepatotoxicity (HTM) is not always detected in preclinical and clinical trials; for this, it is not surprising that hepatotoxic adverse effects (AEs) are only discovered after they have been marketed [2].

Also, the DILI represents 1/600 to 1/3500 of all hospital admissions in the United States and affects 1.4% of hospitalized patients in Switzerland [3,4]. Other studies report that DILI is the most common cause of fulminant liver failure in Western countries [5,6].

In Algeria, the description of this AE remains unknown. In addition, no paraclinical examination can confirm the diagnosis of DILI, it is essentially based on specific CAM often unknown by our clinicians [7].

Since 2011, the Pharmacovigilance Department of UHEO contributes to the safe and the proper use of medicines. It ensures the collection, evaluation and follow-up of drug AEs with corrective or preventive measures within UHEO.

During our activity, it was noticed that the DILI, without being the most frequent among all reported drug AEs, is to be taken into account by its severity. For this purpose, we conducted a study aimed at describing and recounting hepatotoxic AEs in UHEO.

Our study was a descriptive study (June 2011 - August 2017) carried out on archived declarations in our service or on new reports from the various departments of UHEO.

The study included patients who were either consultants or hospitalized at various UHEO departments for suspected hepatitis drug-related following a drug administration regardless the route of administration.

The main inclusion criterion was the manifestation of acute or chronic hepatotoxicity following a drug intake, without any nondrug origin likely to explain this injury. We excluded any patient with an underlying condition that could explain liver injury.

To collect data, we designed a sheet Figure 1 adapted to the collection of the characteristics of the DILI and the elements necessary for the assessment of causality: Once received, the declaration sheet is analyzed. Then, members of the Pharmacovigilance Unit meet to discuss the case and analyze the cause-effect relationship between the drug and the AE using the CIOMS scale. At the end of analysis, a report is written and a copy is sent to the reporting clinician. This report contains the results of our analysis (recommendations for dose adjustment and followup, proposals for safe therapeutic alternatives and interventions concerning the treatment of AE).

The reports from the Pulmonology Department were the highest (39.4% of all reports), followed by Nephrology (24.2%), Internal Medicine (15.2%) and Gastrology (12.1%). 9.1% of DILI cases were associated with cutaneous hypersensitivity signs and therefore came from the Dermatology Department. 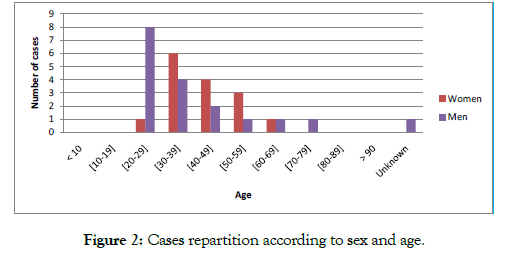 Figure 2: Cases repartition according to sex and age.

The reported cases of DILI were predominantly cytolytic (61%). Cholestatic injuries were the least frequent (9%).

The cytolytic form was observed more in men. However, the cholestatic and mixed forms were observed mainly in women Figure 3. 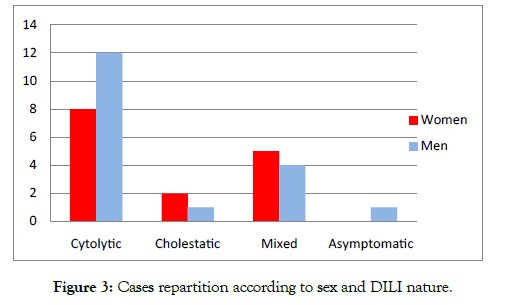 Figure 3: Cases repartition according to sex and DILI nature.

We observed that cytolytic DILI was predominant for the age group [20-29] years. Mixed and cholestatic DILIs were observed in the most advanced age groups Figure 4.

Figure 4: Cases repartition according to age and DILI nature.

DILI occurred mainly in the first three months of treatment (81.8% of cases). 24% of cases occurred within 8 to 15 days after starting the treatment.

The discontinuation of the drug was the most common management strategy of DILI (73% of cases). In 6% of cases, the treatment was continued with reduced doses. Corticosteroid therapy has been used during hypersensitivity events. No specific treatment was used.

The outcome of DILI was favorable in 64% of cases. It was unknown in 12% of cases because of the death of patients before knowing the biologic evolution. In 85% of the cases analyzed using the CIOMS scale, only 1 drug was implicated in the occurrence of DILI. In 15% of cases more than one drug was incriminated.

The incriminated drugs were in 59 % of cases anti-tuberculosis drugs or other antibiotics, followed by non-steroid anti-inflammatory drugs (NSAIDs) and antiepileptics with 15% and 8% respectively Figure 5. 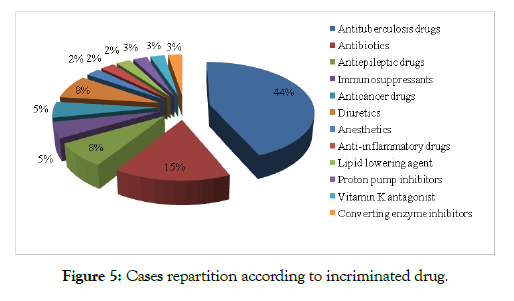 Although this is not the most frequent reported AE, this percentage remains alarming.

The declaration of this AE came mainly from the Department of Pneumology and Nephrology. These rates can be explained by the fact that these two services treated tuberculosis patients or kidney transplant patients who are polymedicated and often treated with potentially hepatotoxic drugs.

Our results showed that DILI affects more men (55%) than women. According to the literature, it is generally accepted that women are more vulnerable than men to the liver toxic effects of drugs [9-11].

However, in some large population studies, there have been no significant differences between the two sexes, but the woman may be more likely to have severe outcome [2,9]. Others, however, reported that DILI due to chlorpromazine, tetracyclines, halothane and diclofenac was predominant in women, while those due to isoniazid, Azathioprine and amoxicillin-clavulanic acid were predominant in men [2].

Our results showed that the age of patients who developed DILI ranged from 22 to 75 years and the average age was 39.6 years. The studies of Robert J et al. and Don C. Rockey et al. reported an average age comparable to ours (41 years and 49 years respectively) [12,13].

Thus, advanced age appears to be a significant risk factor for the development of DILI since it has been reported that the average age was between 55 and 58.54 years in studies done in Sweden, in Spain, and in Japan [9].

According to our study, all reported cases were acute, of cytolytic nature mainly. Similarly, the cytolytic nature of the injury was most common according to studies of Hajime Takikawa et al. [14], Robert J. Fontana et al. [9] and Fernando Bessone [15]. In addition, we noticed that this AE occurred for the majority of cases in less than 84 day after the onset of treatment and about 24% of them occurred between 08 and 28 days. Paul H. Hayashi et al. found a similar result with a percentage of 33% of cases [7]. DILI with a delay of more than 84 days are rare.

A prospective follow-up of DILI cases is essential, as medical diagnosis becomes more reliable over time. This ensures progress in the prevention, early detection and treatment of DILI.

The creation of CAMs, in particular the CIOMS scale, was intended to structure the process of assessing causality. However, they still remain not used by clinicians including hepatologists and gastrologists by lack of knowledge or lack of time.

The course of the injury was unknown in 12% of the cases because of death. Recent similar studies have reported a mortality / liver transplantation rate ranging from 5% -12% [13,16-20].

Finally, our results and those of the literature concerning the nature of the incriminated drugs were disparate Table 1.

Hepatic drug abuse is constantly evolving and is a difficult problem for clinicians, health authorities and pharmaceutical companies.

During our literature search, we found an abundance of recent and very interesting international descriptive studies of DILI. However, such studies and publications are absent at national level.

Our work has thus helped to describe this AE and establish its frequency among the other side effects at UHEO, as well as to highlight the limitations of diagnosis and management.

At the end of this study we recommend:

- Regular dosing of transaminases during treatment with potentially hepatotoxic drugs.

- Improvement of the technical platform to allow rapid elimination of other causes of liver damage.

- Raise population awareness to consult quickly in a health center in case of appearance of jaundice preceded by a drug intake, and to avoid self-medication.

Copyright: © 2020 Berradia A, et al. This is an open-access article distributed under the terms of the Creative Commons Attribution License, which permits unrestricted use, distribution, and reproduction in any medium, provided the original author and source are credited