Introduction: The physical and psychological health of the parents, especially the mother, as the principal person responsible for the care, is influenced by the behavior and needs of children. Motor performance refers to a temporary status of motor behaviour, for example assessed during a motor practice session. Cognition is act for process of knowing including both awareness and judgment.

Objectives: The main objective of this study is to compare motor and cognitive performance of educated Mothers with and without cerebral palsy children.

Methods: A total of 100 mothers in the age group of 25-40 years were selected. Mothers should only have Cerebral Palsy child with aged 3-6 years. After the selection on the basis of criteria, mothers were divided into two groups of 50 each. Group A included the mothers of Cerebral Palsy child while Group B included mothers of normal child. Both groups were measured for motor performance by Figure of 8 and Rhythmic coordination test. Cognition of both groups was measured by Stroop test and Digit Symbol Substitution Test.

As mentioned by Cumming et al. [1] the preferred parent is presumed to be the primary caregiver, that is, the parent who is more likely to take responsibility for the child when that child is ill or hurt. Evidence for such preferences, however, has been mixed. Laboratory studies found that when infants and toddlers were distressed as a result of separating from their parents, they more often sought comfort from their mothers (who is usually the primary caregiver) rather than their father. As suggested by Mrazek [2] the “ good enough ” mothers has adequate intelligence, insight, and relationship building skills to be able to provide satisfactory care for her young child. According to Afzal et al. [3] within the family the mothers is considered, providing care in more than 90% of families. As mentioned by Sawyer et al. [4] the mother’s responsibility as the main caregiver is greatly being ignored.

Typically, children become independent as they grow up, however this process is different for mothers with cerebral palsy child. Under such circumstances, mothers have to spend more time in providing care for their children e.g. feeding, dressing, toileting and bathing. Moreover, in case of severe impairment, children with cerebral palsy (CP) remain dependent on their mothers for longer periods or in some cases even for their lifetime as mentioned by Salkever et al. [5]

As suggested by Rosenbaum et al. [6] Cerebral Palsy (CP) is a group of permanent disorders of the development of movement and posture, causing activity limitation, that attribute to non- progressive disturbances that occurred in the developing fetal or infant brain. The motor disorders of cerebral palsy (CP) are often accompanied by disturbances of sensation, perception, cognition and communication and behavioral problems including secondary physical or musculoskeletal problems.

Vanleit et al. [7] found that having a child with cerebral palsy (CP) means extra pressure on the mothers to provide a constant care for the child, which is needed far beyond the time scheduled for the family. According to Florez et al. [8] the pressure on the mothers leads to an imbalance in their time use and her quality of life can be greatly affected compared to a mother with healthy children.

The aim of the current study was to compare the motor and cognitive performance of educated mothers with and without cerebral palsy children.

Study design: This study was comparative in nature.

Sampling technique: The subjects were selected by purposive sampling.

Source of data: Subjects were taken from Physiotherapy Clinic and Hospital in and around Ludhiana.

• Mothers who are the primary caregiver of the child.

• Mothers living in nuclear family and having only child.

• Mothers who are the primary care giver of child.

• Mothers living in nuclear family and having only child.

• Mothers with child with age 3-6 years.

• Mothers who are psychological problem.

Based on inclusion and exclusion criteria, 100 female subjects will be enrolled for the study by Purposive sampling. Informed consent was obtained from all the subjects. The subjects were divided into two groups A and B of each 50.

Group A including 50 normal mothers without cerebral palsy child were assessed for cognitive performance by using Stroop test which include Stroop Word test and Stroop Colour test mentioned by Blankevoor et al. [10] and for motor performance rhythmic coordination test and figure of 8 test were performed as mentioned by jaana et al. [11]

Data was meaningfully assorted through the calculation of Mean and Standard deviation. Later on, Unpaired ‘t’ test was applied for comparison between the group A and group B for the cognitive and motor performance of mothers with cerebral palsy child and mothers without cerebral palsy child. The level of significance was fixed at p<0.05 (Tables 1-6 and Figures 1-5).

Table 1: Comparison of figure of 8 test values of Group A and Group B.

Table 2: Comparison of Group A and Group B for Rhythmic Coordination test.

Table 4: Comparison of Group A and Group B for Stroop Word test.

Table 5: Comparison of Group A and Group B for Stroop Color test.

Table 6: Educational status of the mothers with and without cerebral palsy child. 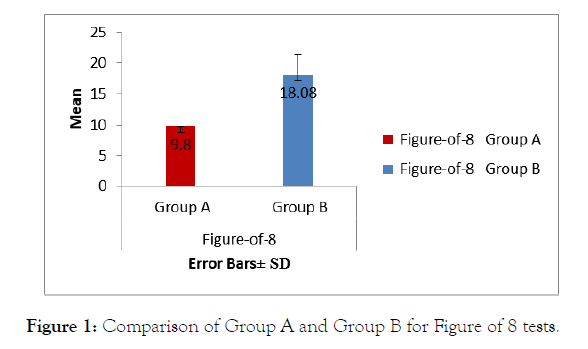 Figure 1: Comparison of Group A and Group B for Figure of 8 tests. 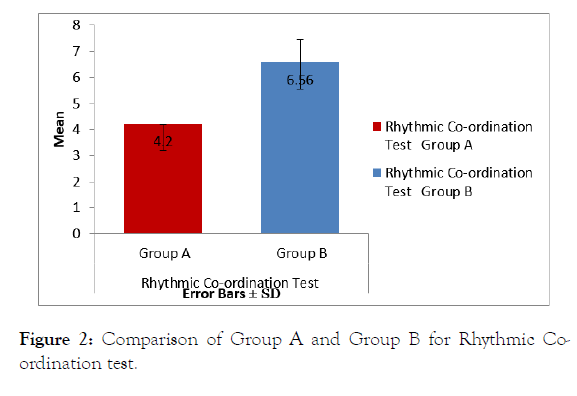 Figure 2: Comparison of Group A and Group B for Rhythmic Co-ordination test. 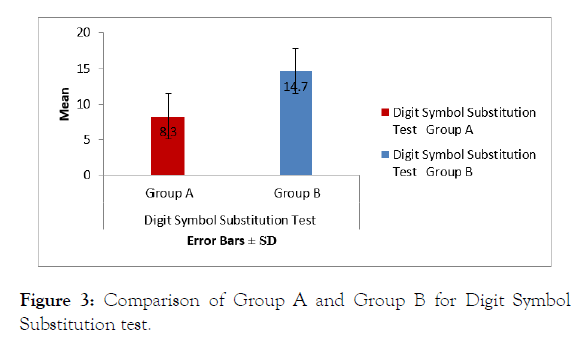 Figure 3: Comparison of Group A and Group B for Digit Symbol Substitution test. 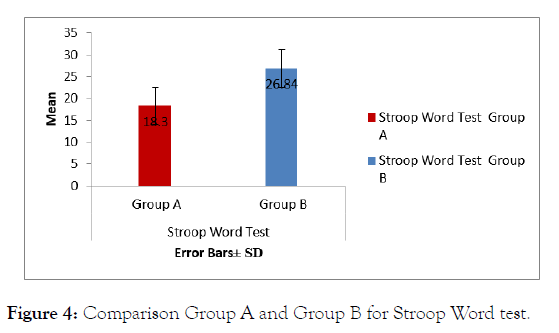 Figure 4: Comparison Group A and Group B for Stroop Word test. 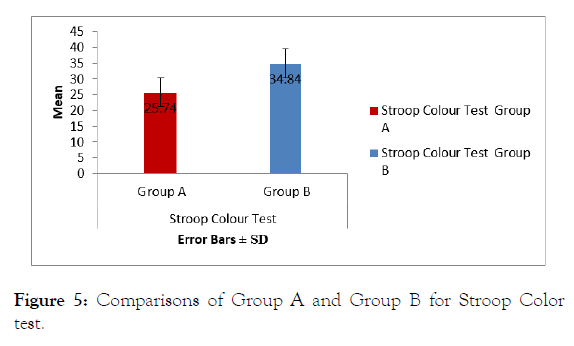 Figure 5: Comparisons of Group A and Group B for Stroop Color test.

The reason behind the better results in Cerebral Palsy child’s mothers would be more time spent and more multitasking activities of the mothers. Mothers of cerebral palsy child were more involved in multitasking and in extra care of the child as compared to normal mothers. Mothers of cerebral palsy child have to put extra energy and extra attention as compared to normal mother’s child. A multitasking woman is a lady who is having the ability to handle multiple tasks without decreasing the quality of the result as mentioned by Yadav [12].

Qualitative research corroborates these findings who interviewed women employed in clerical jobs, finds that many working mothers seek to save time by multitasking at home and at work. For these women, multitasking maximizes time use and serves as a time-management strategy that allows them to deal with the double duty they experience being wage earners and care givers as mentioned by Hessing et al. [13] for many working mothers multitasking is the “key to success” as mentioned by Arendell et al. [14] One function attributed to the anterior PFC is multitasking, in particular, the selection and maintenance of higher order internal goals while other sub-goals are being performed as mentioned by Badre et al. [15]

The prefrontal cortex (PFC) is the cortical region in the frontal lobe anterior to the primary and association motor cortices. This brain area increases in size with phylogenetic development and, at least in humans, it is thought to be involved in planning complex cognitive behavior and in the expression of personality and appropriate social conduct. The prefrontal cortex is an anatomically and functionally heterogeneous structure and comprises cytoarchitectonically distinct regions, accounting for about 30% of our total cortical area as suggested by Fuster et al. [16].

Brodmann Area 10 (BA10), also known as the frontal pole or rostral/anterior prefrontal cortex, is the largest and most anterior region within the human PFC as mentioned by Semendeferi et al. [17].

Koechlin et al. [18] have proposed that processing of 'cognitive branching' is the core function of the frontopolar cortex. Cognitive branching enables a previously running task to be maintained in a pending state for subsequent retrieval and execution upon completion of the ongoing one. Many of our complex behaviors and mental activities require simultaneous engagement of multiple tasks, and they suggest the anterior prefrontal cortex may perform a domain-general function in these scheduling operations. A 2006 meta-analysis found that the rostral prefrontal cortex was involved in working memory, episodic memory and multiple-task coordination.

Neurophysiological measures of information processing attention and executive functions were assumed to show a positive relationship with motor acts in terms of speed and fluency, particularly when attention is divided and the regulation of voluntary movements is required as mentioned by Srajurri et al. [11].

Copyright: © 2019 Kumari V, et al. This is an open-access article distributed under the terms of the Creative Commons Attribution License, which permits unrestricted use, distribution, and reproduction in any medium, provided the original author and source are credited.