Partial Anomalous Pulmonary Venous Connection (PAPVC) is a rare congenital abnormality characterized by drainage of one or more pulmonary veins to the right atrium or to one of the systemic veins. This pathology has low prevalence, although it is probably underestimated and is rarely diagnosed in adults.

We reported a rare case of hemoptysis in adult associated to isolated partial anomalous pulmonary venous return. He is a patient of 49 years-old man who had a partial anomalous pulmonary venous connection (PAPVC) from the right upper lobe to the superior vena cava without other congenital heart disease. A right bilobectomy (superior and middle lobe) was performed for the treatment for hemoptysis and PAPVC. The patient has an uneventful postoperative recovery and remained well at follow-up 8 months after surgery.

Partial anomalous pulmonary venous connection (PAPVC) is a rare cardiac anomaly (less than 1% of all congenital cardiac defects). The diagnosis can be incidentally identified on imaging. It occurs when one or more of the pulmonary veins drain into the right atrium, coronary sinus or a systemic vein. Its prevalence is approximately 0.4%-0.7% in the general population [1,2], 10% of cases described on the left-sided [1]. The commonly site of anomalous connection is the superior cava vena (SVC) and in rare cases the azygous vein is involved [2].

We present a rare case of massive hemoptysis due to PAPVC with anomalous connection of the right upper lobe to the SVC; with the presence of a left superior cava vena was drained directly into the coronary sinus. The aim of our observation was to show that hemoptysis can be a revealing sign of PAPVC rather than recurrent bronchopulmonary infection in some cases and to demonstrate that lung resection can be effective treatment.

A 49-year-old man with a remote smoking history (30 packs cigarettes/year) and without significant past medical history was admitted for management of hemoptysis that started 3 days before. There was no context of alteration of the general condition, exercise intolerance, orthopnea, or chest pain.

Chest radiograph was normal. An emergency bronchoscopy showed active bleeding from the upper lobe, stigmas of bleeding at the level of the whole bronchial tree, diffuse inflammation of the bronchial mucosa. It showed, also, telangiectasia especially at the level of the trachea and the right bronchial tree. The Chest computed tomography (CT) revealed a partial anomalous venous drainage from the right upper lobe to the superior cava vena (SVC) (Figure 1A-1C), with an intact atrial septum and the presence of a second vena cava on the left drained directly in the sinus (Figure 1B). The right upper pulmonary vein were noted to be draining to the superior cava vena, which was anormaly connected to the right auricle (Figure 1B and 1C) and multiple foci of ground glass opacity in the upper right lobe (Figure 1A). The transthoracic echocardiography disclosed dilatation of the coronary sinus that may be consistent with left superior cava vena draining into the coronary sinus, no abnormality of systemic venous return or interruption of inferior cava vena, no signs of arterial pulmonary hypertension. None segmental abnormality compatible with ischemic disease was disclosed in this exam. The patient had initial medical management consisting of strict bed rest, insertion of a wide-bore intravenous cannula, monitoring of arterial blood gases and aerosol therapy of adrenaline. An intravenous infusion of vasopressin was prescribed in the absence of contra-indication.

On the seventh day, a new episode of massive hemoptysis was occurred. The patient was hemodynamically unstable; tachypneic, tachycardic (110 beats/min) and hypotensive (80/60 mm Hg). The laboratory tests disclosed hemoglobin of 8.3 g/dL. In this case, surgical emergency intervention was performed because of persistence of bleeding in spite of medical treatment.

A right lateral thoracotomy was performed under one lung ventilation. On preoperative exploration, the right upper pulmonary veins were drained into a superior cava vein, which was normally connected to the right atrium (Figure 2). There was two SVC right one and left one. A right bilobectomy (superior and middle lobe) was performed (Figure 3). The postoperative course was uneventful and the radiography was without anomaly (Figure 4). After that, the patient did not report any other episode of hemoptysis. Figure 3: Operative piece of the bilobectomy (upper and middle lobe). 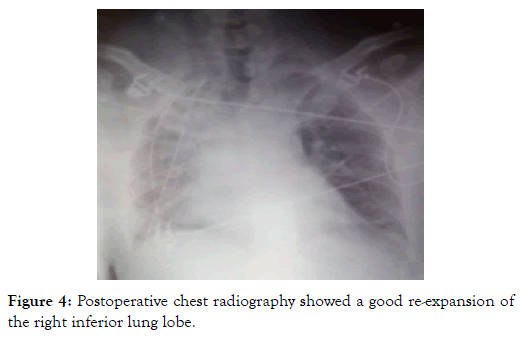 Embryologically, the most acclaimed theory is that the initial pulmonary venous drainage is via the associated venous plexus (splanchnic plexus) communicates with the systemic cardinal and umbilical vitelline veins [1,5]. Later on, regression of primitive connections with systemic veins occurs and splanchnic plexus connects to common pulmonary vein budding from the wall of the left atrium. Failure of this connection results in PAPVC [1].

The most frequent presenting signs and symptoms were a heart murmur and dyspnea on exertion [5,6]. Also the recurrent bronchopulmonary infection and severe pulmonary hypertension are described as being symptoms of PAPVC. In our context, particularity is that the presenting sign was the hemoptysis. The diagnosis of PAPVC is usually confirmed through the use of transthoracic and transesophageal echocardiography [2,7]. Otherwise, pulmonary angiography by right heart catheterization was used as radiological exam diagnostic but it might not show anatomy details and anomalous vessels. Chest tomography with reconstruction and cardiac magnetic resonance imaging are required to define these abnormal pulmonary venous connections more clearly [2,7,8]. In our case, the contrast-enhanced chest CT confirmed the PAPVC.

The choice of treatment depends on the severity of the disease evaluated by the shunt-index, comorbidity, and the age of patient. Patients with small PAPVC (the ratio of pulmonary flow to systemic flow < 1,5), can be strict followed and revalued until adolescence. However, in case of an intrinsic cardiac anomaly, surgery should be performed in order to repair of the cardiac defect and correct the anomalous connection of the pulmonary vein typically with reanastomosis to the left atrium [8]. Currently, there is no consensus on when to surgically intervene in PAPVC cases. Lobectomy is described as a treatment modality for selected cases of PAPVC, particularly Scimitar syndrome, defined by hypoplasia or aplasia of one or more lobes of the right lung.

In our case, the surgical team had advised bilobectomy (superior and middle) as a treatment modality of this PAPVC and making stop of this recurrent hemoptysis. Hemoptysis has never been reported as sign of this congenital heart disease so it is significant to improve the recognition and prompt diagnosis of this rare pathology and widen the etiology spectrum of hemoptysis in adult other than tumoral or infection causes.

Partial abnormal venous return is a rare congenital pathology and diagnosis in adult age is exceptional. Frequent symptoms of PAPVC are the recurrent bronchopulmonary infection or signs of pulmonary hypertension. However, the PAPVC can remain silent until adult age. Recurrent hemoptysis is a rare symptom observed in this pathology or maybe never been reported as telling sign of this congenital heart disease. The surgery of this pathology is delicate, but through our observation, in case of PAPVC associated to hemoptysis emphasis is placed on the lung resection remains the appropiate curative therapeutic alternative.

Copyright: Â© 2020 Abdennadher M, et al. This is an open-access article distributed under the terms of the Creative Commons Attribution License, which permits unrestricted use, distribution, and reproduction in any medium, provided the original author and source are credited.